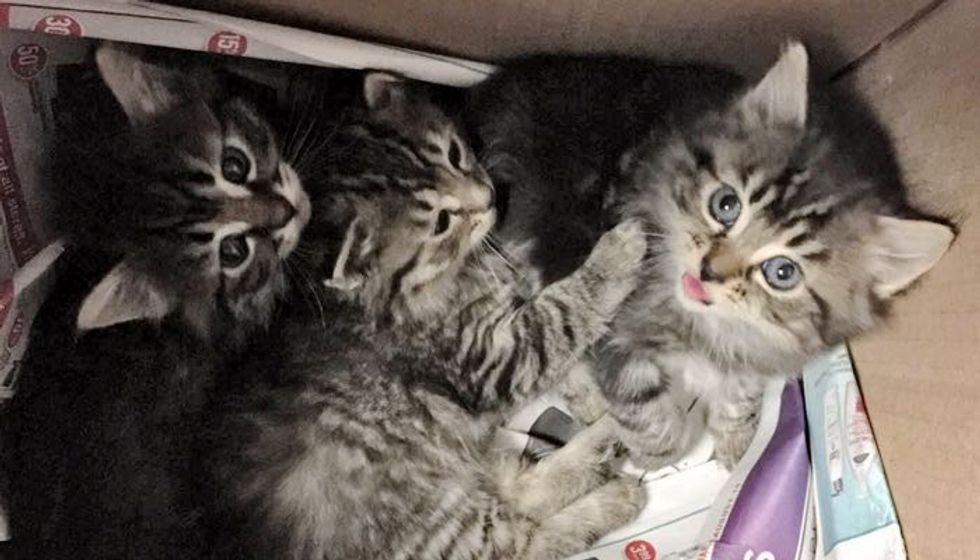 Tabby Kittens Found in Wine Box from Scared to Loved

It took a village overnight to save these three tabby kitties found in a wine box. They were scared and hissy when the volunteers met them, but that quickly changed...

Vancouver Orphan Kitten Rescue Association shares the story with Love Meow: "Late Monday night, VOKRA received a call from the SPCA asking us if we had any connections (i.e. cat ladies) in Chilliwack (Canada). Some kittens had been found abandoned in a wine box and, unfortunately, whoever found them decided they were perfectly fine in the box and left them to be. The RCMP had also declined to pick them up."

The box where they found the kittens in.

"After relaying a kitten red alert to our volunteers, we quickly received many offers of people willing to help. However, when we sent out two people who lived nearby the box of kittens had mysteriously disappeared. A case for Nancy Drew? Not quite - as it turns out, the RCMP had picked them up and hopefully that will be these kitties’ last ride in a squad car! Our volunteer Shirley rushed to pick up them up and transported them to yet another volunteer Marion, who received the late night arrivals at her house in Aldergrove."

"The three kittens were only five weeks old and a little wary of their new human friends. You can bet they had a lot of hissing to share with us!"

Snoozing sitting up. Just before heading to their new foster home.

"Thanks to this concerted group effort, these little fur babies will soon forget the undoubtedly unpleasant first weeks of their life and will no longer face the hardship of life on the streets.

Instead, they'll soon be ruling over their own human slaves, purring to their heart's content, just as they were meant to be."

"Since the kittens have been in foster care they've grown and are super cuddly and loving. The little girl has been named Bambi and the two boys are Thumper and El Tigre (Tigger). Bambi is right in there wresting with the boys and she eats as much as they do. They all like to do everything together and also love their foster dog."

Now they are snuggling comfortably with their big blanket at their foster home.

Share this story and help these little buddies find their forever homes!