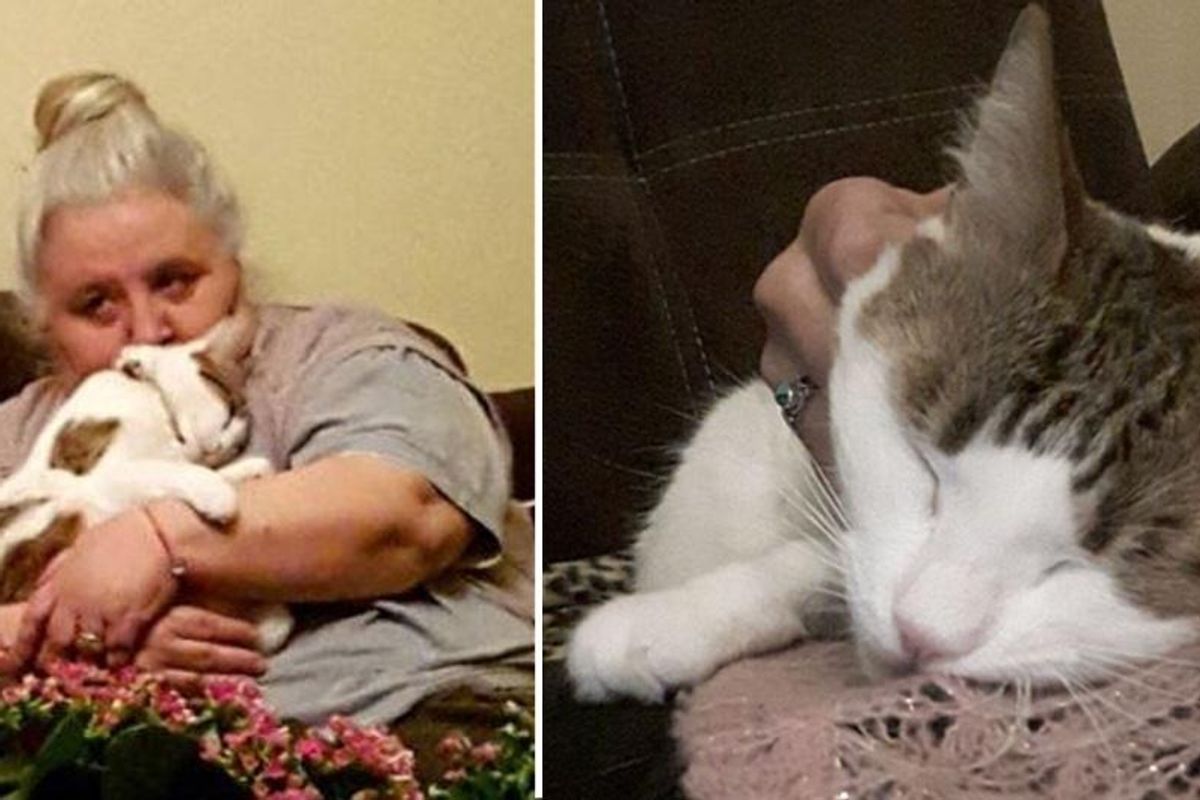 Tailless Cat Insists to Be with Sad Grandma Who Never Liked Cats, It Changes Her Life...

A tailless cat who was saved from a tram rail track, found a sad grandma who lost her husband of 55 years. The grandma never wanted a cat, but the sweet feline curled up next to her and changed her life forever. 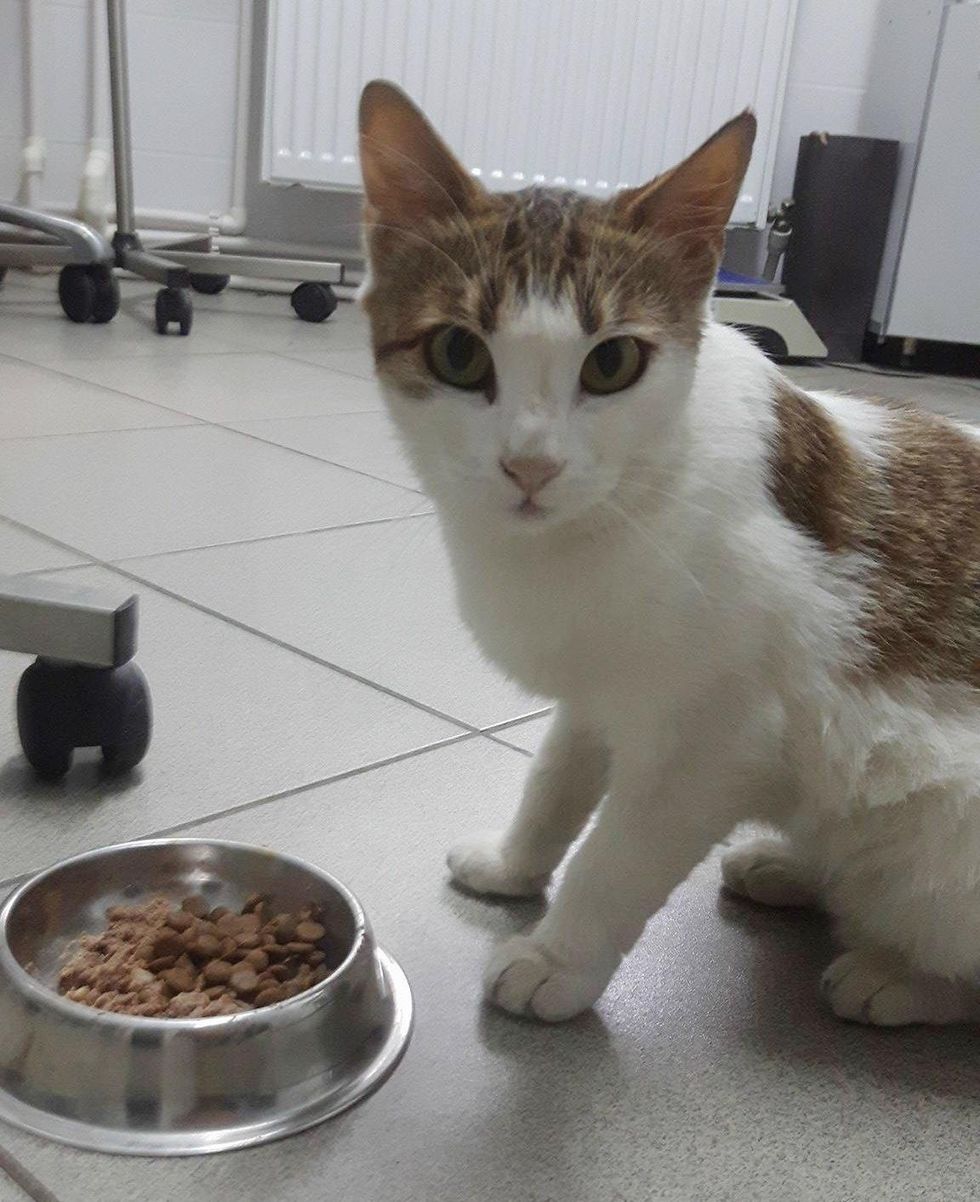 Two years ago grandma Lulia's husband suddenly passed away after over half a century of marriage. She was devastated and lost. The family suggested getting a pet for grandma, hoping it would give her the companionship she needed.

They didn't talk about it again until summer 2016 a tailless cat made her way into their home. "I found Mitsie on a tram rail track right as I was about to cross the street. The weather was really bad." 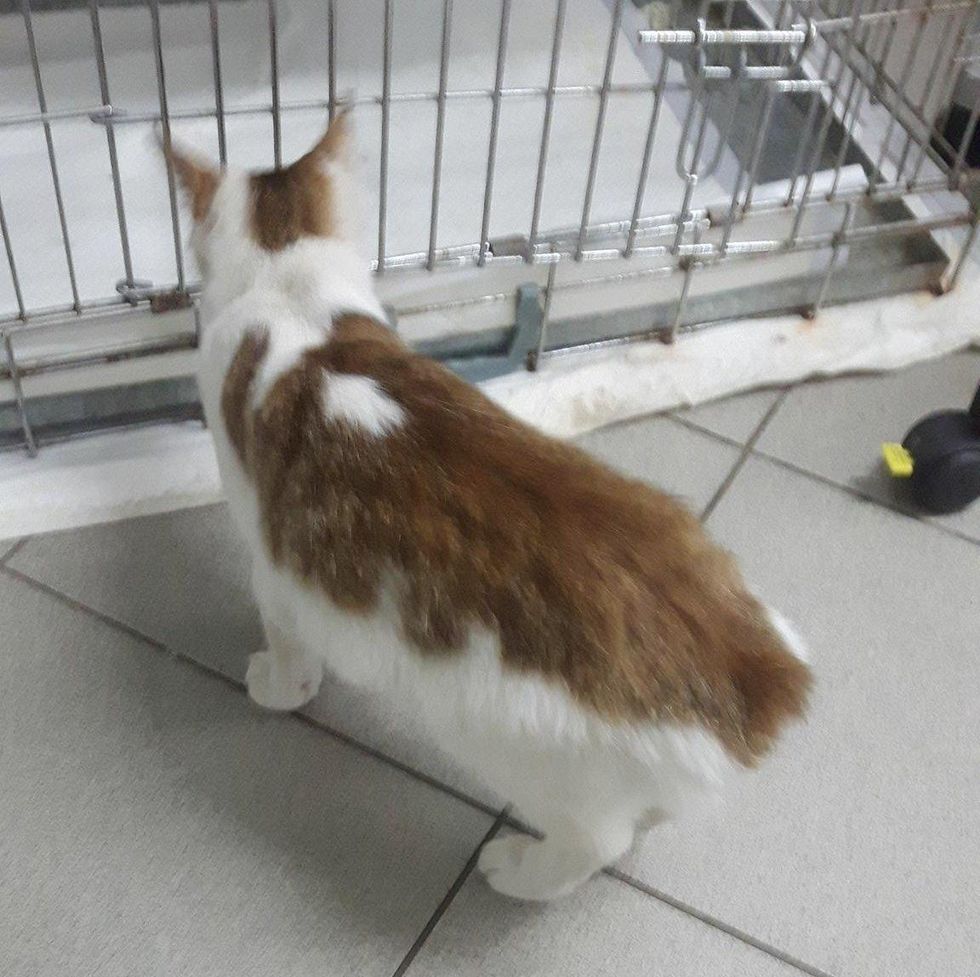 Theo didn't want to startle the kitty into traffic so she slowly approached her while calling to her. "She got up and ran towards me, jumped straight into my lap. I thought I absolutely couldn't leave her there," Theo told Love Meow.

The kitty was just skin and bones, covered in filth. Her tail was missing and she was in bad shape. Theo took her in and brought her back to health. 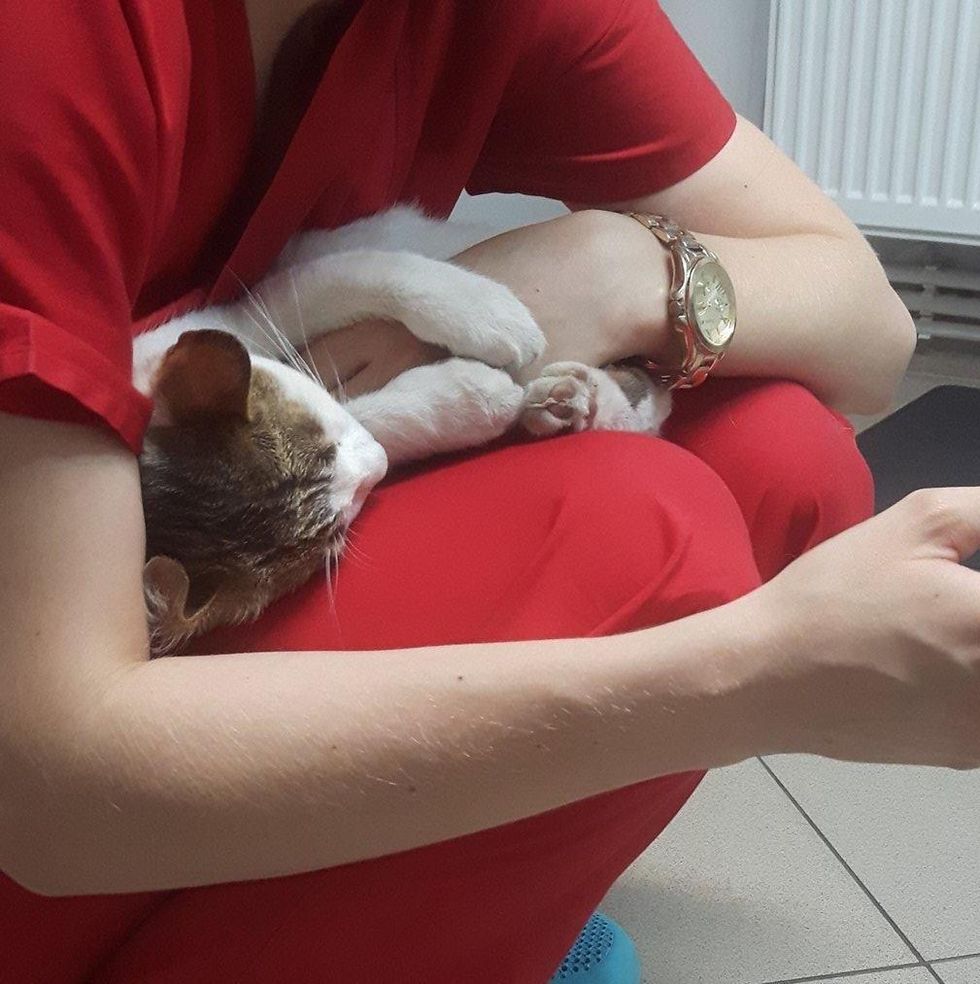 While she was looking for a home for Mitsie, she had to stop by her grandma's on her birthday. "I brought Mitsie with me by pure chance, but to my surprise when grandma saw her it was love at first sight."

As soon as Mitsie came out of her carrier, she walked right up to grandma Lulia, jumped on the couch next to her and curled up for a nap right by her side as if she had always lived there. Grandma who used to adamantly object the idea of having cats, offered to foster the sweet feline for a few days until they could find her a permanent home. 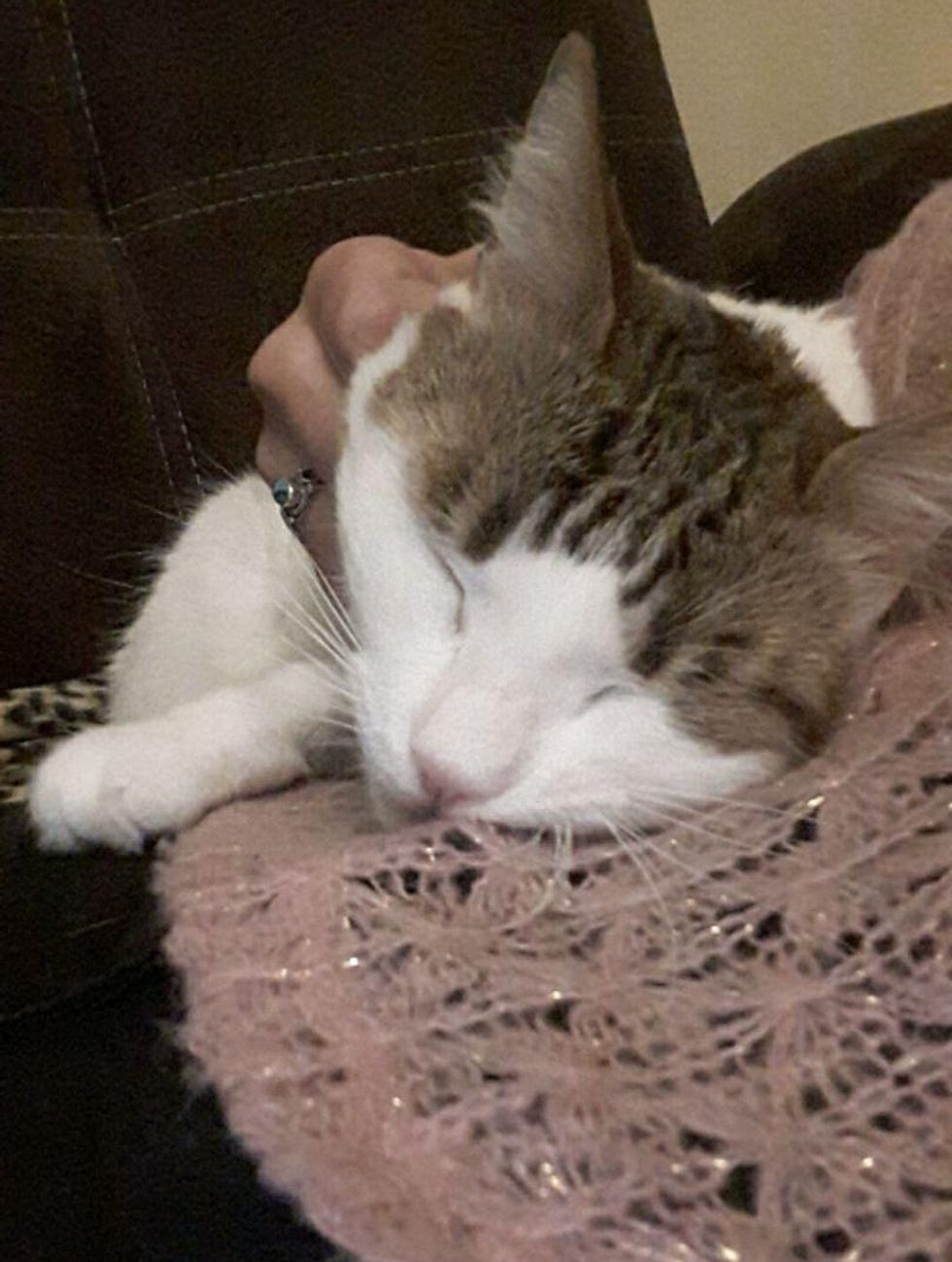 But Mitsie had a different plan.

"She adjusted to the house so well, knew exactly where to look for the litterbox, how to use the scratch post, and my grandma's chest became her bed. She claimed a spot on the windowsill as well as in my grandma's heart," Theo told Love Meow. 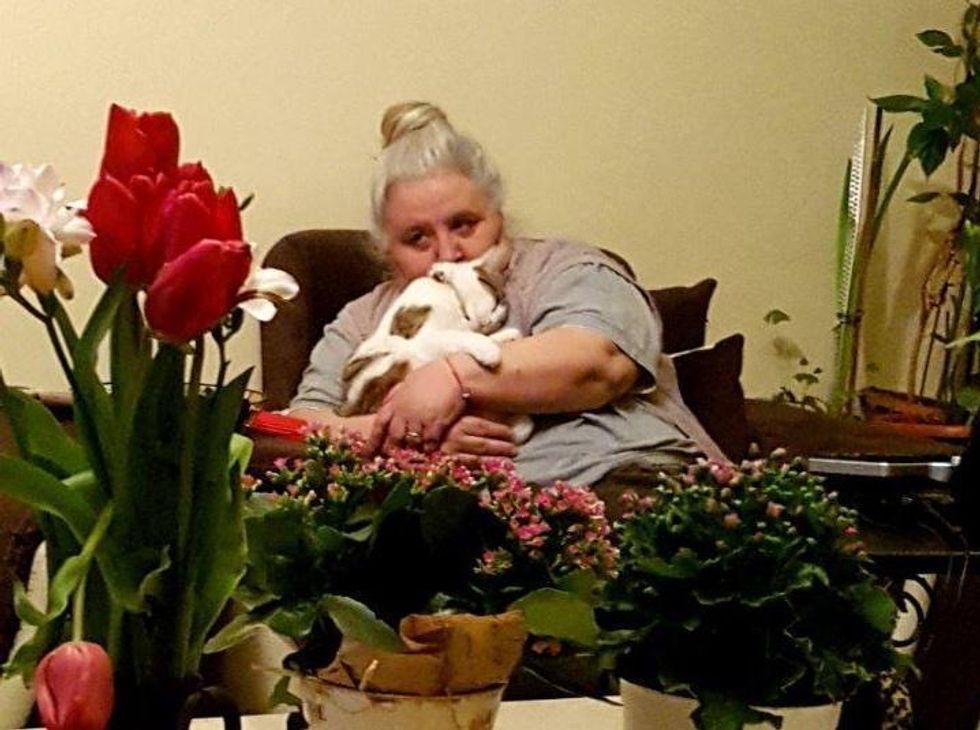 "I brought up the 'foster' concept again a few weeks later and my grandma looked at me as if I was crazy. 'What, giving her away now?'" Grandma refused and Mitsie never left her house since.

The bond between grandma and Mitsie is the most beautiful thing they have ever seen. 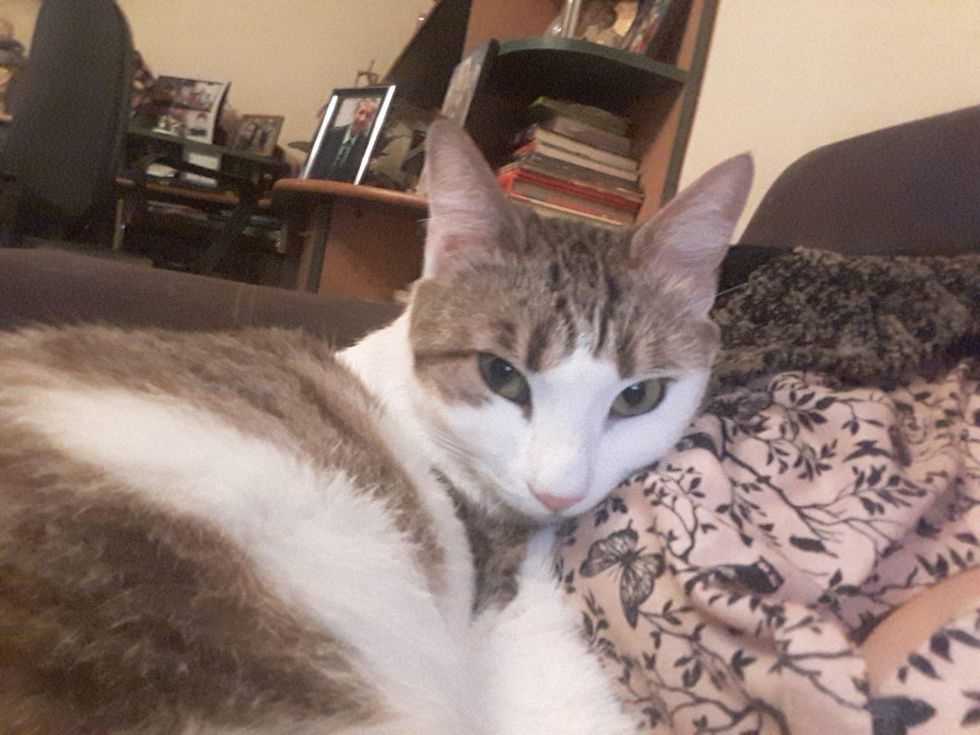 "Their bond is unspeakable. Mitsie is able to sense whenever my grandma is sad or hurt. She will climb right in her lap and take my grandma's hand in her paws, settling her head in my her palm. My grandma said she acts just like a child," Theo told Love Meow.

"The most important part of their bond is how Mitsie is very vocal, but particularly so around my grandma. After living with grandpa for decades, the fact that she was left alone with no one to talk to took a huge toll. Mitsie checks on her day and night by gently chirping at her, and in turn my grandma talks to her." 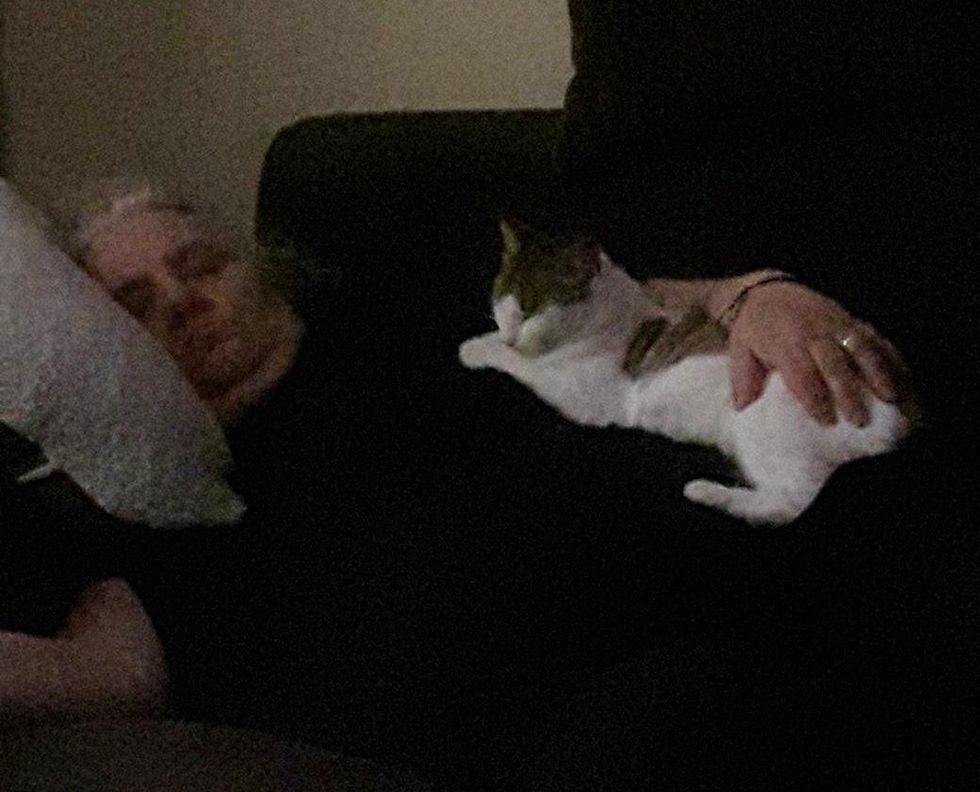 "Mitsie has been a real blessing, and my grandma always gushes about how she's the best cat, so clever and good," Theo told Love Meow.

"I am absolutely convinced they found each other when they needed it most... Animals truly work wonders." 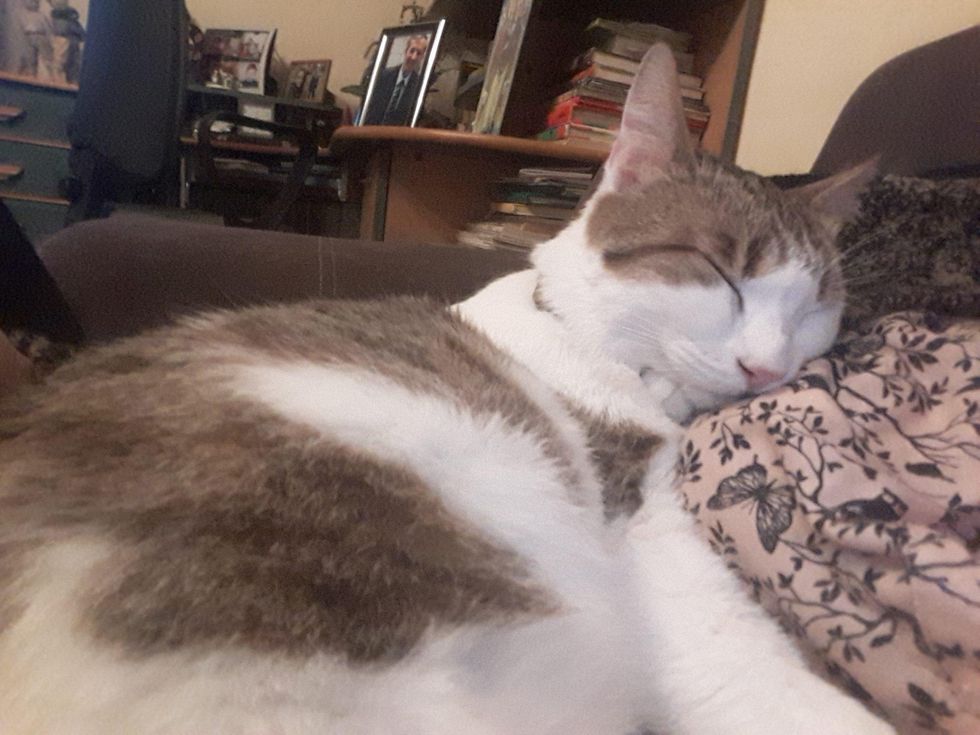