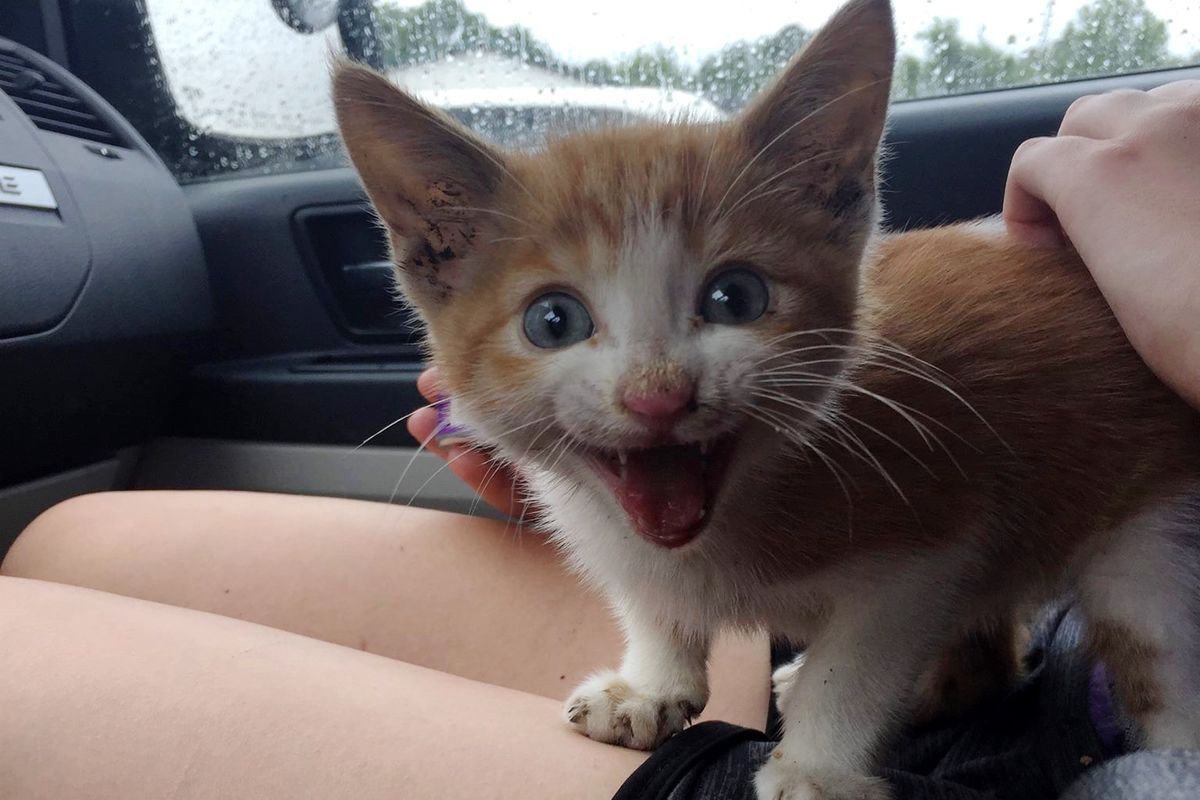 Two months ago on a rainy day a young girl and her mother found a tiny abandoned kitten under a storage shed out in the rain.

They couldn't leave him there. 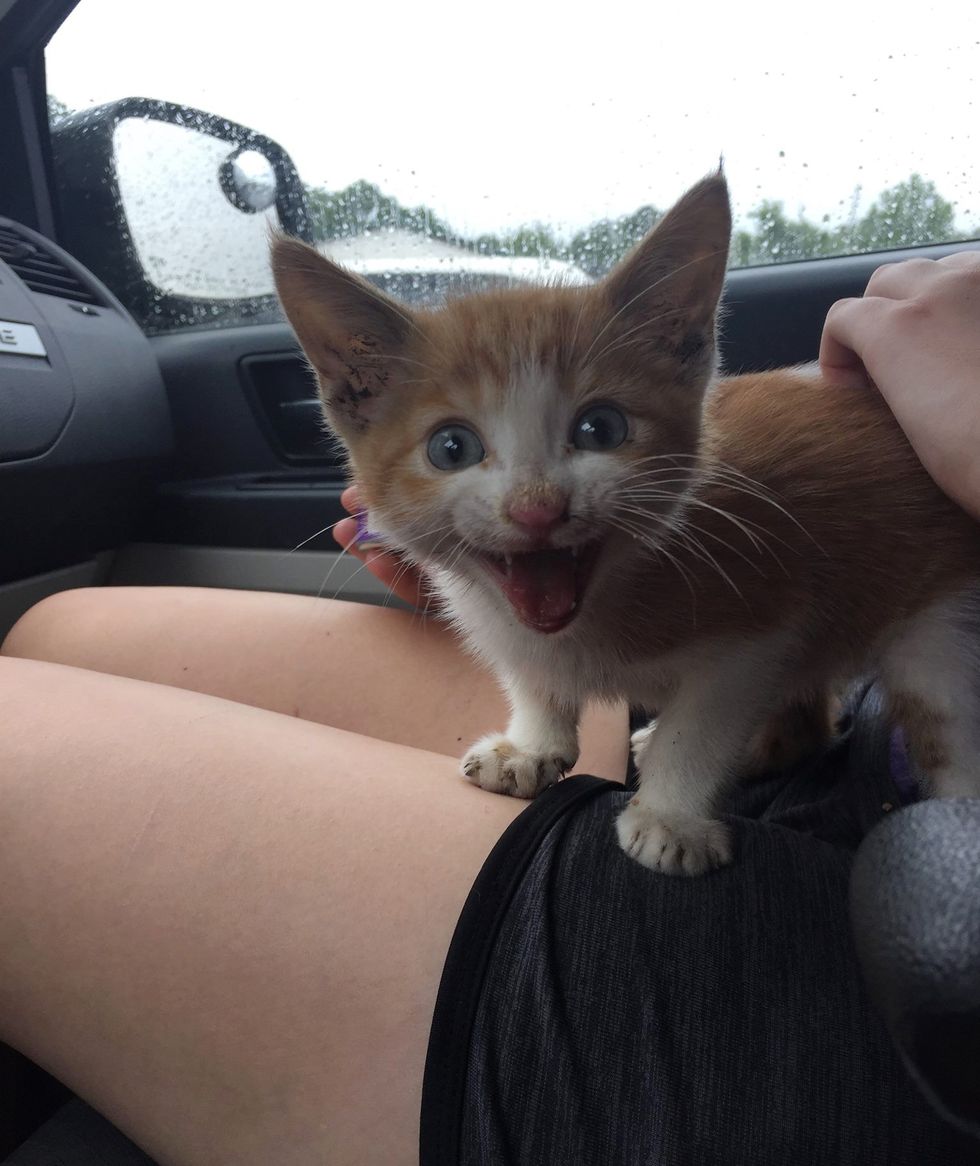 Maury and her daughter Rachel from Arkansas were out running errands at their local police station. When the mother got out of her car, she heard a frantic kitten cry. "I thought I was hearing things, but when I came out I still heard it," Maury told Love Meow.

The two began following the sound, looking around for the kitten. As they were searching in the rain, Rachel spotted a tiny ginger fluff shaking in fear, meowing desperately under a shed. She quickly reached under and gently pulled him out to safety.

They rushed back to their car with the kitten in Rachel's arms. The little guy was visible shaking and scared. His voice was very hoarse from all his crying. "The police department is right by our animal control so we wonder if someone dumped him there," Maury added. 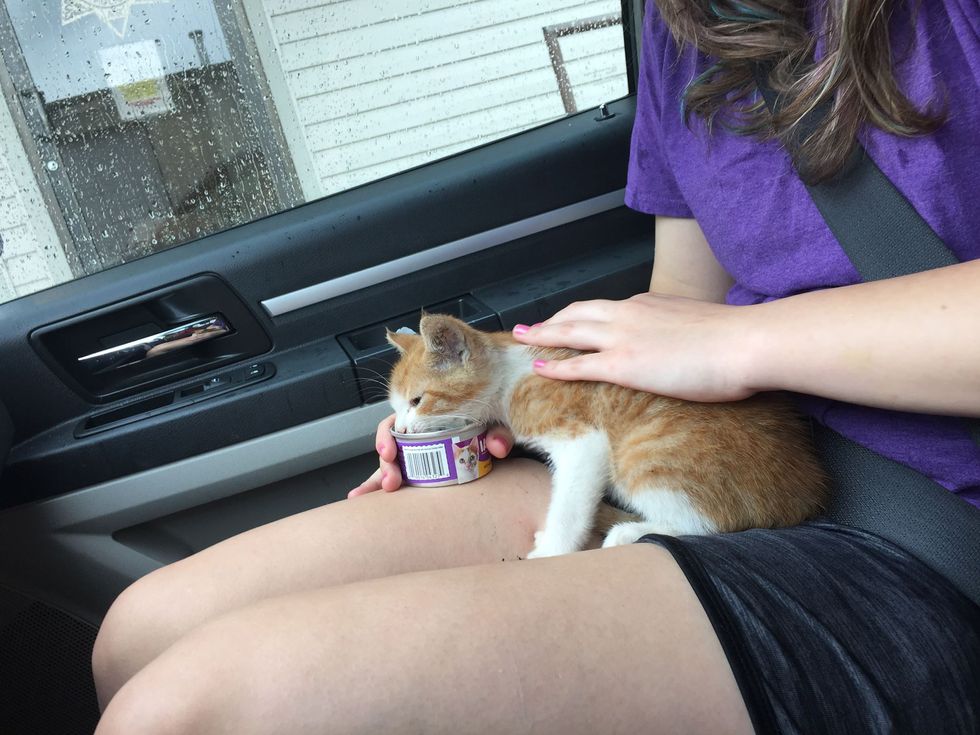 The canned food they kept in their car came in handy that day. The hungry little feline was so happy to be given food that he scarfed it down purring.

"He was alone crying for help and his voice was hoarse, we think he had been there for a few days," Rachel told Love Meow. "His paw pads had been burnt from the hot pavement. He was so happy that someone rescued him." 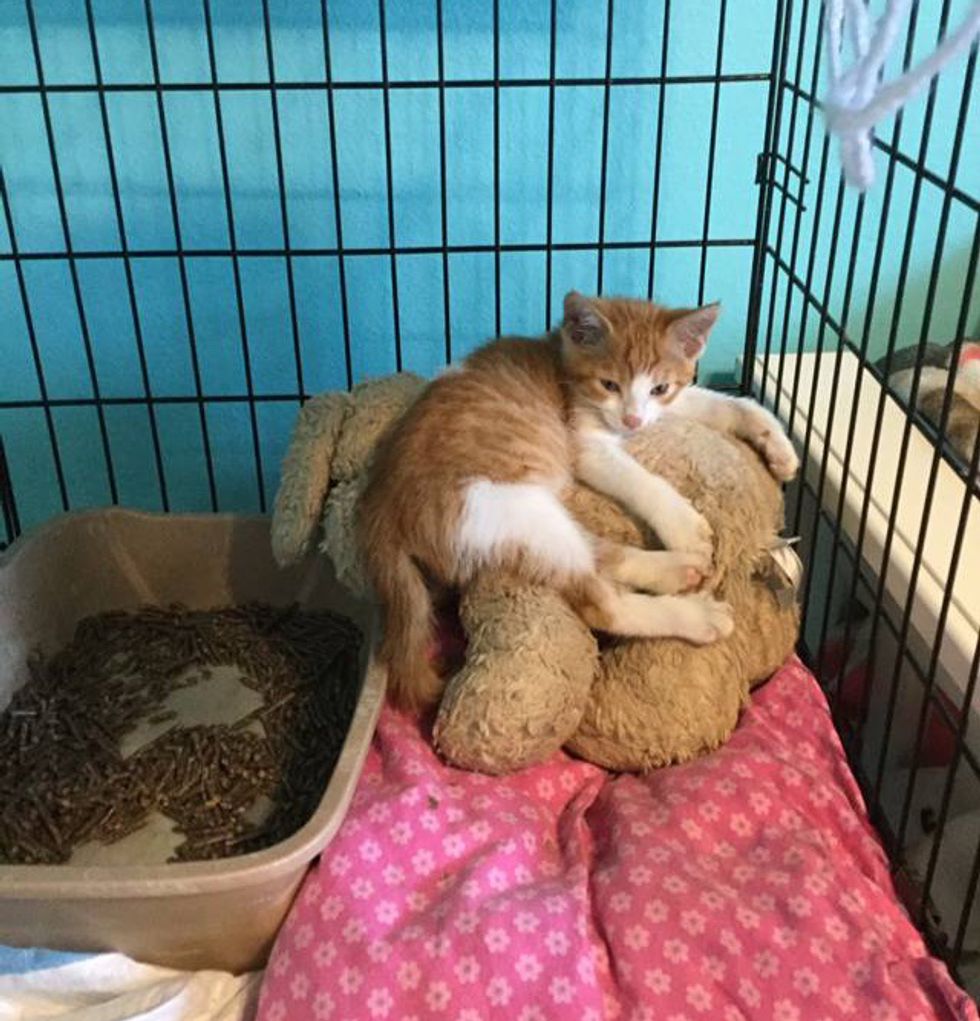 "We both had tears. We rarely find a kitten ourselves, they are normally brought to us. We were excited that we had rescued him together, and so thankful that we were the ones there that heard his cries," Maury added.

They named the little guy Ollie and took him home to foster. 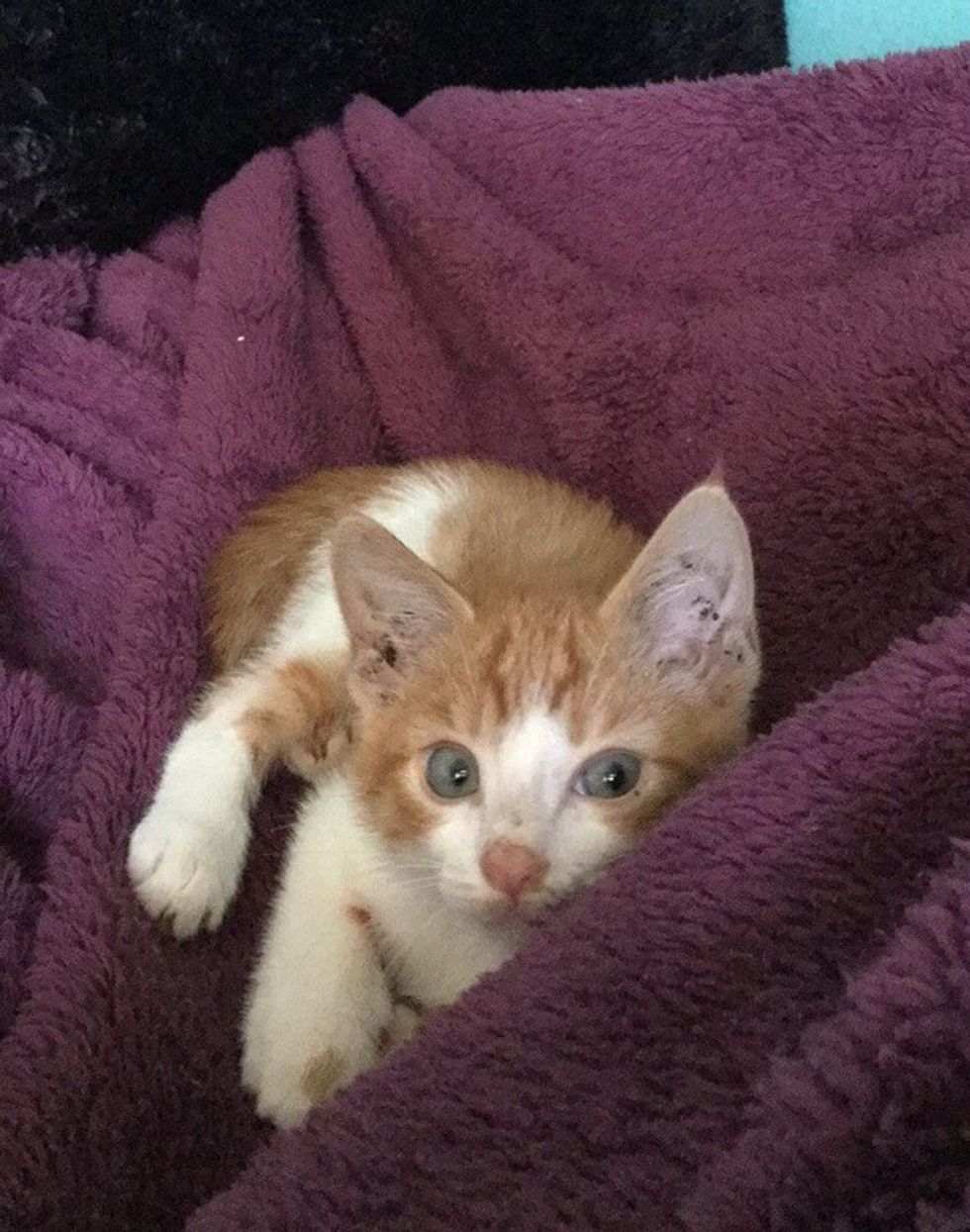 For the first time in his life, the ginger boy got to know love, warmth and comfort. He quickly came out of his shell and became a playful bundle of joy.

"We were there at just the right time to find him! He is such a sweetheart and is so relieved to be cared for." 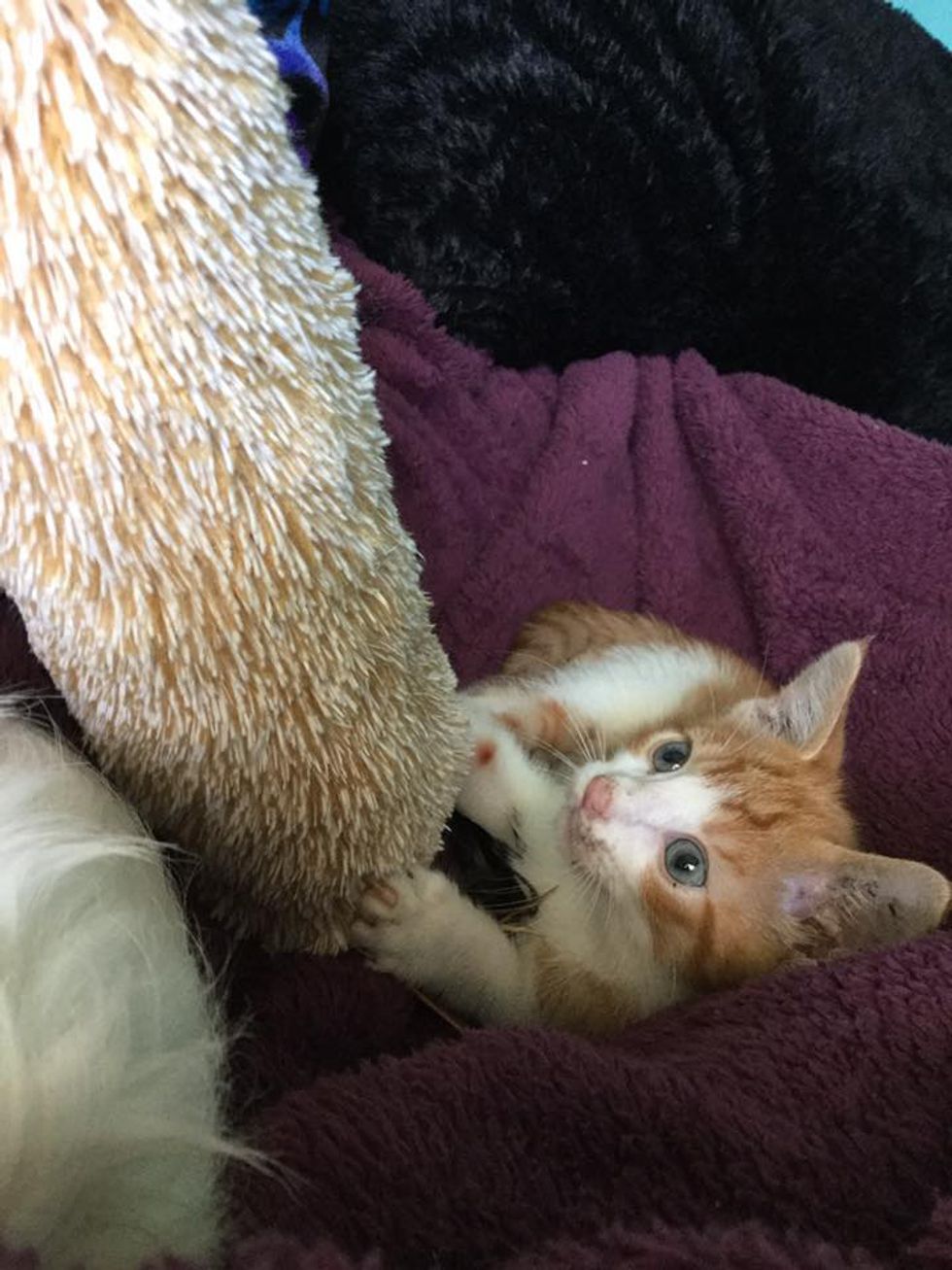 When it was time for adoption, Ollie and another foster kitten, Darwin, became the perfect match for a family whose cat had been longing for a friend.

"The family that adopted them has two other dogs, and a cat that was very lonely after losing his best cat friend. These two kittens have helped him so much. He had been very depressed and stopped playing and now he's active again and plays with his new kitten friends," Maury shared the updates with Love Meow. 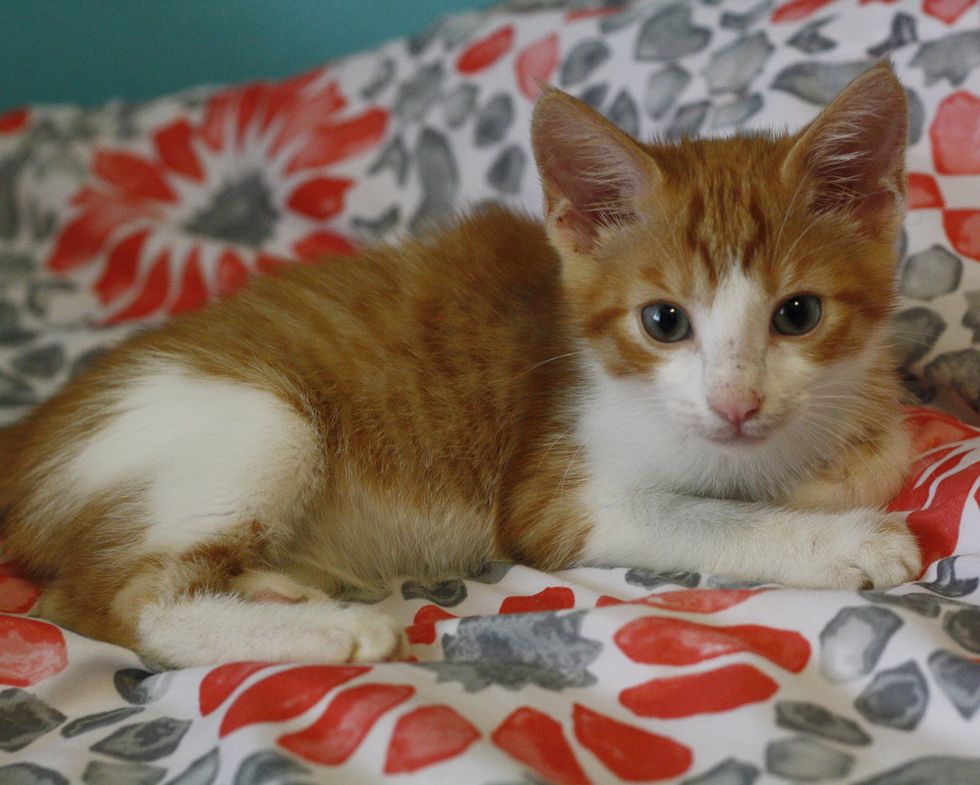 Rachel and her sister Leah have been fostering since they rescued their first kitten Mason.

"He is the reason we started fostering," Rachel told Love Meow. "We have taken in around 150 kittens in the past years, a big majority of them being orphaned or sick kittens." 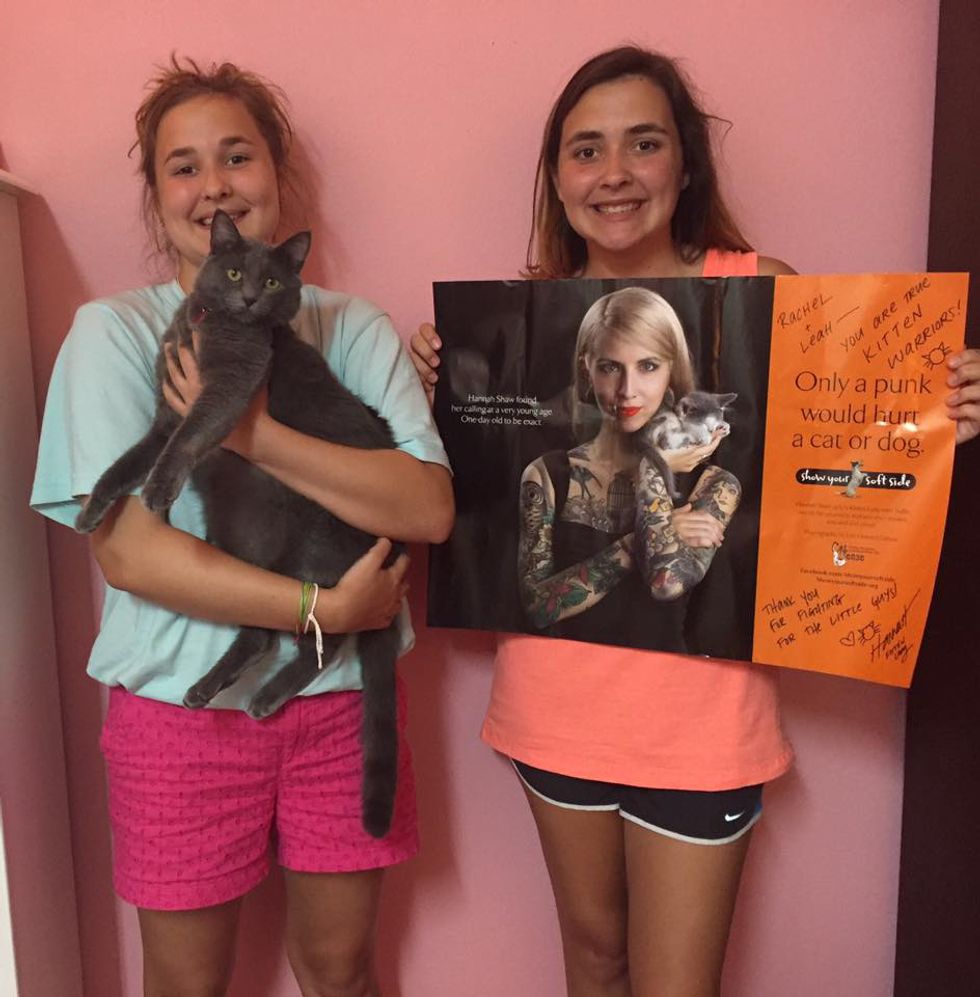 Rachel and Leah and their first rescue Mason the cat!Kitten warriors

The two sisters continue helping kittens in need and documenting the kitties' journey to their forever homes on their Facebook page Kitten Warriors.