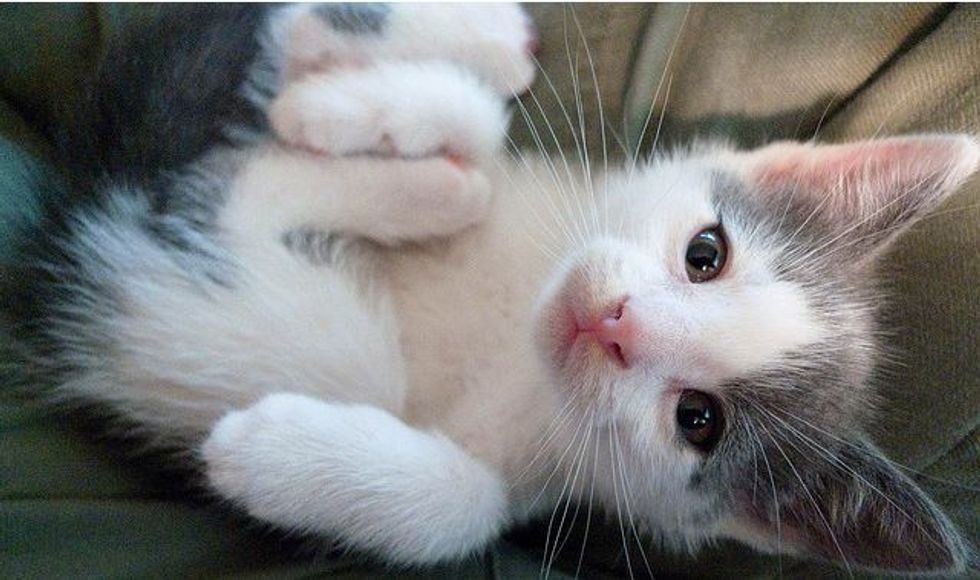 The Dream that Helped Sam Find His Forever Home

We never think about becoming a three cat household... two is quite enough, thank you. Yet somehow, we always end up with three cats sharing our domicile, doing all those feline things that can make you laugh or tear your hair out, depending on the mischief. Most of the time, that third cat seems to find us rather than we finding them.

In March of 2009, we had been a two cat household since our elderly tabby Thumper had passed away about a year and a half previously. I'm going to stop here and say that this next part is rather out of character for me and will probably sound a little flaky, but it is what it is. :)

Oddly enough, I began to have a recurring dream of a kitten. Not random kittens, but a grey and white one with a marking in its fur that resembled a heart. Over and over I had this dream... so much so I mentioned it to the spouse who joked that if I saw a grey kitten, I would at least have to think about getting it. In that same time frame, an old friend rescued a cat dumped onto her property that ended up being pregnant. I was telling her about this dream since I was so bemused by it and she stopped me, telling me she was sending me a picture. When the picture came up, there was a proud mama cat with a litter of four tuxedo cats in a heap. At the top of the heap was a fifth kitten... a lone grey and white cat.

I'm not a big believer in fate, but here was a friend with a dire need to find homes for these kittens and we had the means to take one in. We began to make arrangements to pick up the kitten of unknown gender (which in itself was a bit unusual as we are a girl cat household). After a while, my friend became *certain* that the little cat was a girl so we started thinking of him in terms of being female. When we brought him home, it was actually the first time he'd had any significant contact with people, but even so, it rapidly became clear that he was alright with humans and before long, he was making himself comfortable on one or another of us. In that time, we were trying to think of a name for a girl. Nothing fit, so he was dubbed "TK" for Tiny Kitten.

A trip to the vet the next day soon gave us the knowledge that our adorable little ball of fluff was a boy. We tossed names around, but nothing seemed to fit. It wasn't until my son looked at him and declared that "he looks like a Sam" that we had our name. We kept the TK as his middle name, which pretty much guaranteed he was going to be the biggest cat we've ever had.

As Sam has grown, it's become pretty clear that he's a *really* happy cat. Sometimes, even before he enters a room you hear him coming because he is purring as he comes to find you. His tail is almost always high in the air as he makes his way through his domain, making sure all is well. He is always the first to greet at the door when we come home and the last to say his goodnights at night. In my case, he can't fit in my lap any more, but he always cuddles close or sprawls partway across me, purring the entire time. He loves to play and if you look at pictures of him, his sheer exuberance comes through loud and clear.

That's not to say life with Sam is all sunshine and roses. Sam is a big cat with some pretty honed hunters instincts. If he doesn't get enough exercise and stimulation, he tends to be destructive. Yet despite these things, life with Sam is well worth it because he is without a doubt, the sweetest boy we've ever had. As we do our nightly chores, he follows us around, just wanting to be in the same room that we are. He goes out of his way to spend time with each of his people at some point in his busy day. In short, he is ridiculously cute, monumentally exasperating, loyal and loving and very much a member of our family.

Oh... and that mask around his face, goes over his head and tapers at his neck. When he sits, with his head tilted up, you can clearly see a heart-shaped marking.