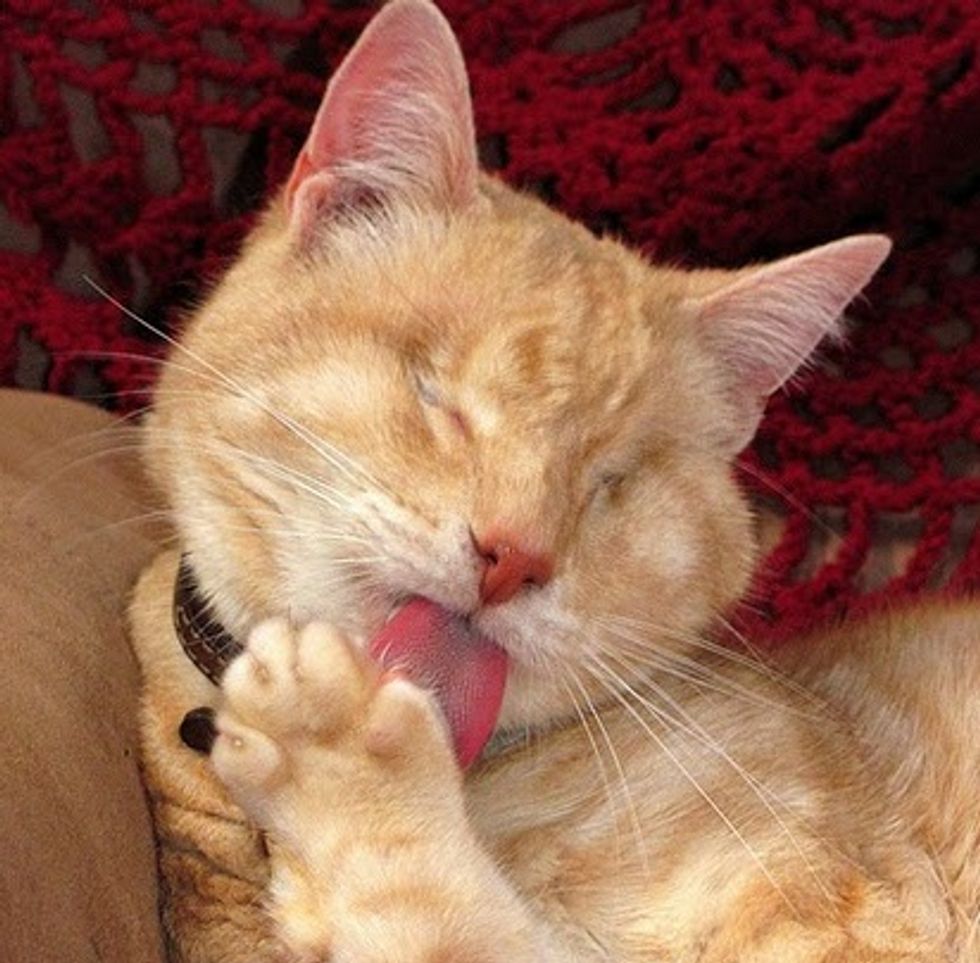 Gumbo is an absolute treasure. He is an amazing boy who time and time again demonstrates that cat have ADAPTABILITY not DISABILITIES. Gumbo won me over when I visited the cat rescue. Out of 226 cats, he stole my heart. Granted, I came home with a different cat at first because I needed one that I knew could do pet therapy and comfortably visit nursing homes, but I convinced my husband to give me a third cat as an anniversary present and quickly went back and brought home the big (he was quite overweight when we adopted him) orange boy.

Gumbo had been dumped on the shelter grounds. It took them a while, but they were eventually able to get him inside with the rest of the felines. Gumbo was missing many teeth and had a broken tail, but he seemed otherwise reasonably healthy. . . or so we thought. Not that long after he settled into our home he developed uveitis. Courses of antibiotics, steroids, and antivirals didn't prevent the progression of the inflammation. My handsome Gumbo went blind in one eye first then lost that eye completely thanks to the painful secondary glaucoma that occurred. Then the uveitis destroyed his other eye leaving Gumbo completely blind. None of this stops him. Gumbo is simply astounding with his ability to adapt to anything and everything.

I had plotted out move from Iowa to Minnesota and very carefully planned introducing Gumbo to his new envirnment slowly, one room at a time. Within fifteen minutes of arriving, Gumbo had surveyed the whole house and knew the layout. Two tricky things for him were found, though: he couldn't judge the location of the step into the sunken living room (much, much better now although he still occasionally goofs) and he had no fear of leaping, including wanting to jump down to the bottom of the stairwell. A quick trip to the hardware store for plexiglass to put across the rail averted any potential disaster. For an eyeless cat, Gumbo certainly figures out how to climb on anything he can find.

Gumbo behaves like a normal cat. Even I forget and slip up times, especially when he's seated on a window ledge facing out at the world. "Whatcha watchin', Gumbo?" Silly question. When Gumbo met Petunia, a mouse, for the first time, he first quickly glanced over the mouse cage then began staring intently at Petunia. However, Gumbo had no eyes. He's simply amazing to me.

Please, please, please, if I learned anything through Gumbo, it is that blind cats can have a fabulous quality of life. Do not overlook a blind cat or think you need to put them to sleep to put them out of their misery. Gumbo, an incredibly content boy, has no misery. He takes everything in stride and loves life along the way.

I love this boy and will miss him terribly one day. He cuddles at night with me. I even had to add a second pillow above my head so that Gumbo wouldn't keep pushing me off my own pillow!

Gumbo's roughly 16 years old now, but I hope he lives another 16 years.