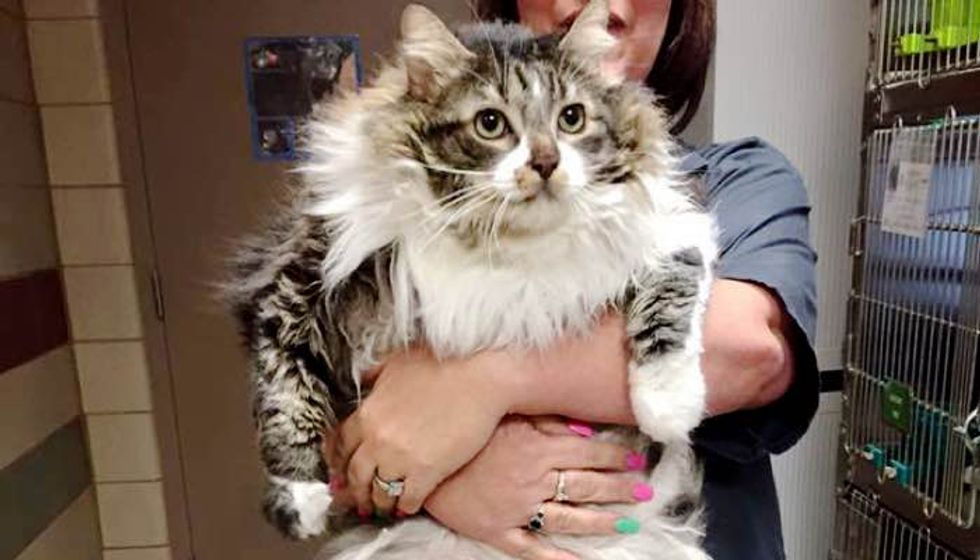 This 8-year-old shelter cat with matted fur was very unhappy. But everything changed after a kind woman got him out of the cage and gave him the help he needed.

Booger is 8 years old, about 30 lbs. He was surrendered to the shelter with severely matted fur. He couldn't find a home because he was very unhappy, but anyone would too if they went from a home to a cage with matts all over.

Karyn Poplin of Kitty Adventure Rescue League rescued the big kitty from the shelter and brought him into her care. "It took us about an hour to shave him, and we shaved off about a pound of matts of his big ol' belly," she told Love Meow.

Weighing in almost 30lbs, Booger is now on a diet to help him slim down to a healthier weight and happier self.

Right after removing all the matts, Booger was a new kitty. He gave Karyn cuddles and couldn't stop purring.

They believe Booger is a Maine Coon cat or part Maine Coon. Besides his fluffiness, he has a personality just like the Maine Coon.

"He loves to rub on feet. He's kind of like the ottoman from Beauty and the Beast - he follows you around until you sit down, then he gets under your feet and demands belly rubs!"

"He's down a little over a pound right now... He doesn't do tricks for treats, he just sits there and stares at you until you inevitably give up and give him the treat anyway."

Now the weather is getting cold in Texas, they give him sweaters until his beautiful coat grows back to its glorious form.

With just a little bit of love and care, they have brought happiness back to Booger's life!

Booger will go up for adoption once his weight gets under 20lbs. We will post updates once his coat grows back! Share this story and help Booger find his forever home!