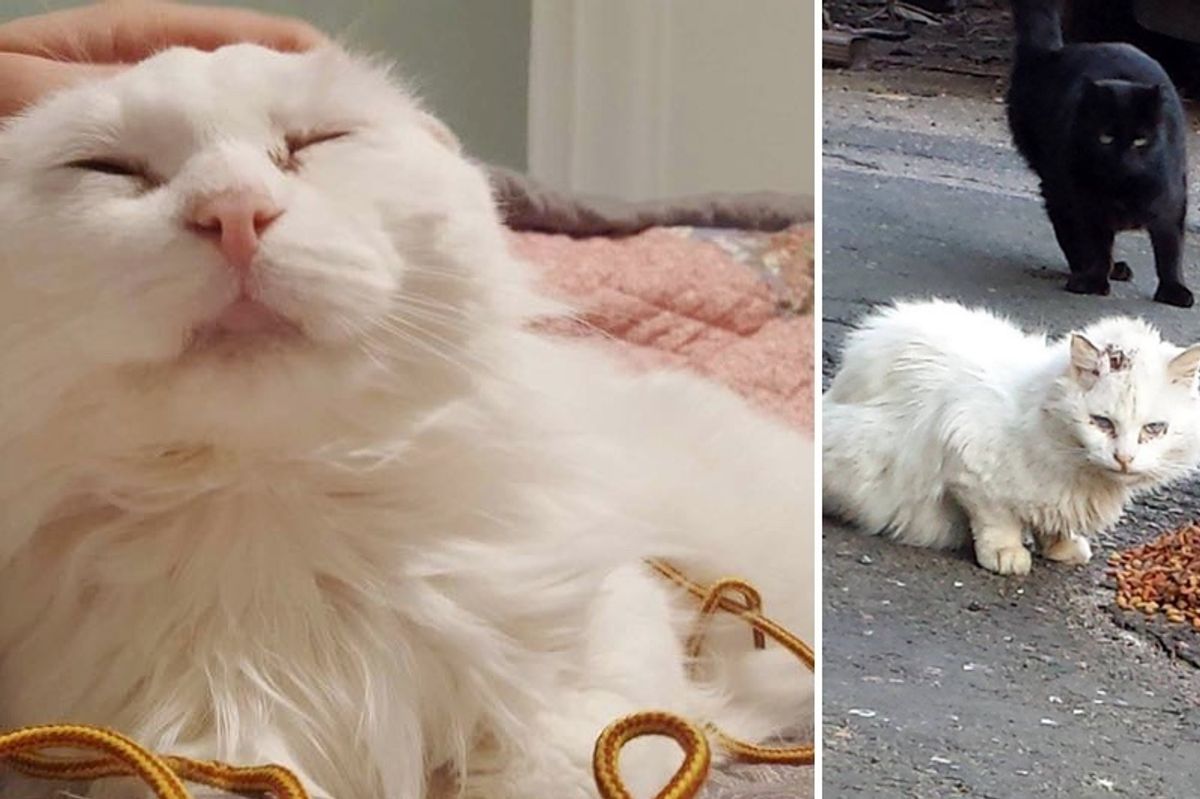 'Unadoptable' Cat Wouldn't Let Anyone Near Him But His Rescuer Never Gave Up, Now a Year Later...

A year ago when rescuers came across the saddest looking feral cat on the streets of Boston, they knew they had to trap him and get him help.

His name is Coconut. 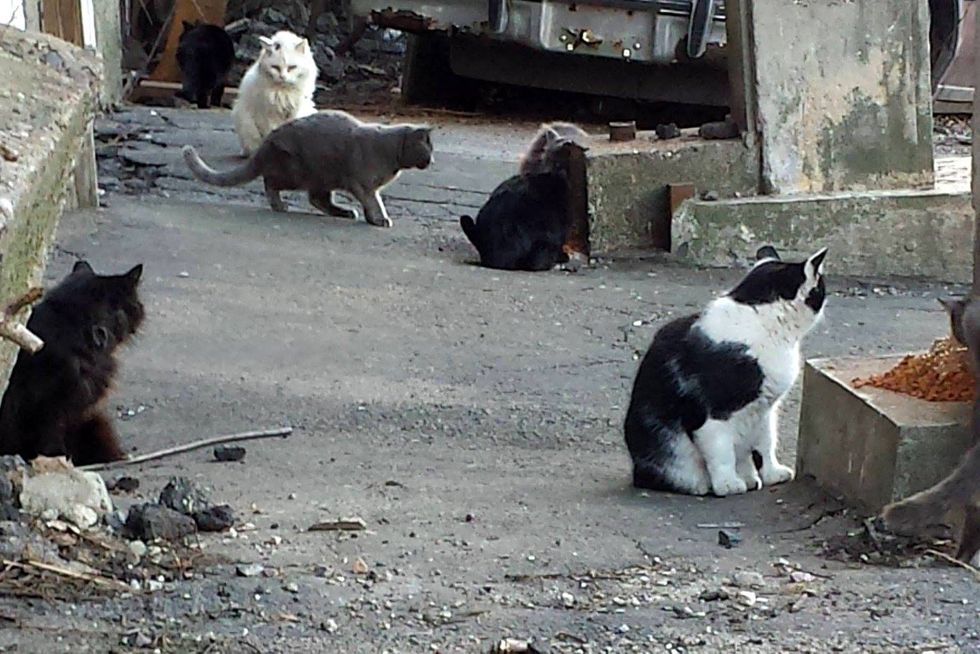 Rescuers of Boston's Forgotten Felines went on a TNR mission when they spotted a pathetic looking feral cat who was in terrible shape. He was beaten up and living in constant fear on the cold streets of Boston.

Their initial plan was to neuter him and return him to his feral colony, but as soon as they noticed his poor condition, they knew they had to help him.

"Coconut was a mess. He had URI, UTI, goopy eyes and had something covering his tail that looked like oil. Not to mention ear mites and chronic diarrhea along with a bad back leg," Joni Nelson founder of Boston's Forgotten Felines said. "But it was his nasty attitude that made him hard to like. The pathetic thing couldn't go back to his colony in the shape he was in."

They took him in and placed him in a cage where he received his daily meds. His infections started to clear up but he was still very grumpy and wouldn't let anyone near him. Feeding and cleaning his cage became very difficult as the kitty would lash out when they tried to open the door. 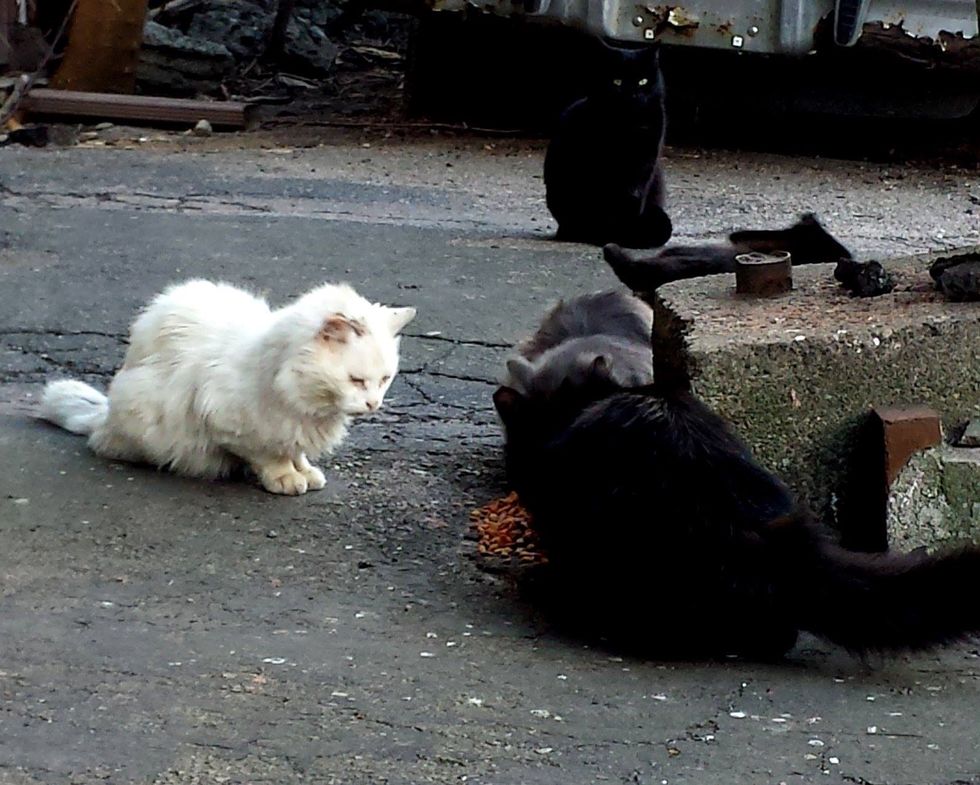 It took a long time until Coconut finally decided to calm down a bit. "I could go in and clean his box and put down food without him coming at me but still hissed whenever anyone walked by his cage," Nelson said.

"Still he never lifted up his head all the way, always looking down. He never bothered to clean himself and I sure couldn't touch him to clean out his eyes. I knew for sure he couldn't go back on the streets to live like that!" 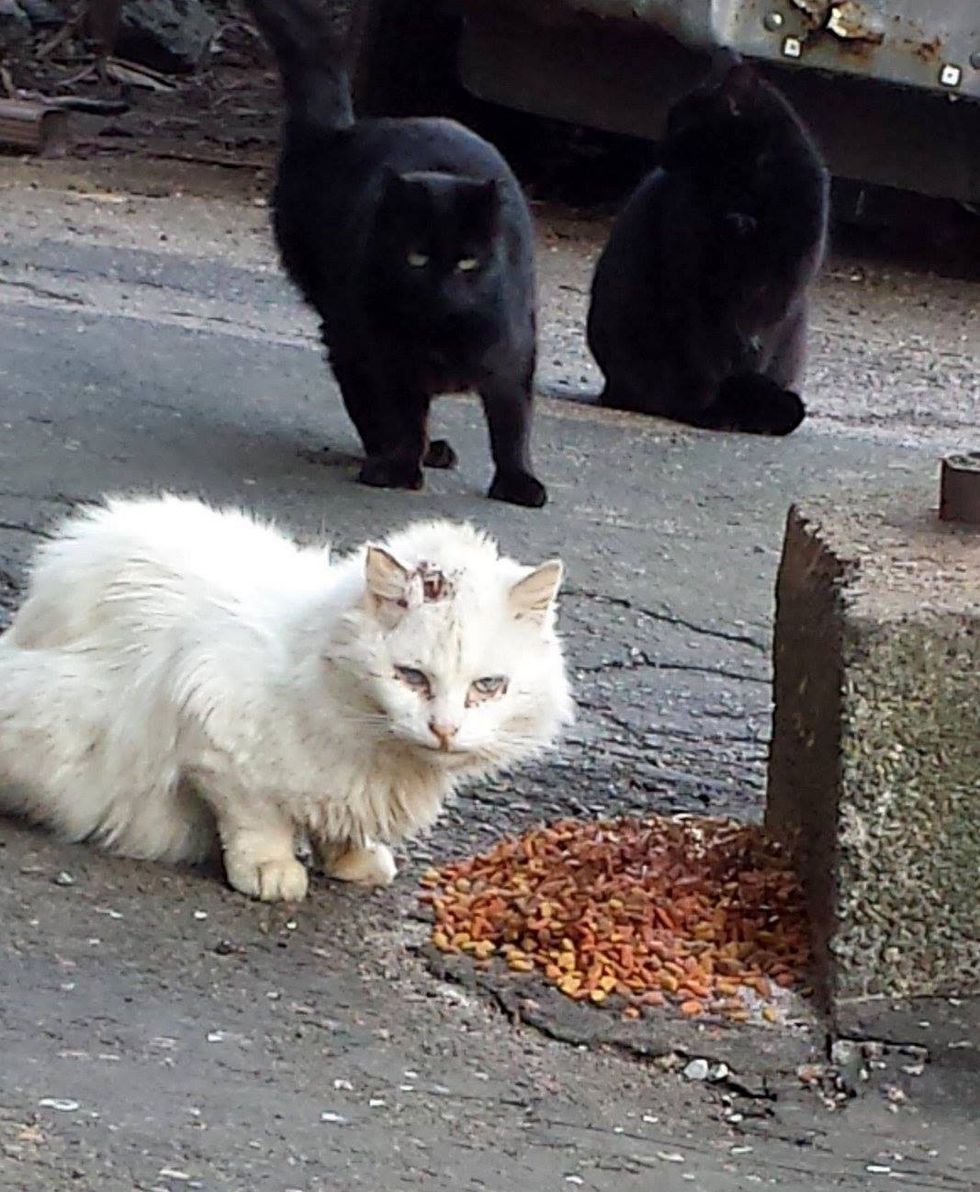 They continued working on his trust even though it might seem hopeless to others. Nelson wasn't willing to give up.

Months had passed, she began to see a glimmer of hope. 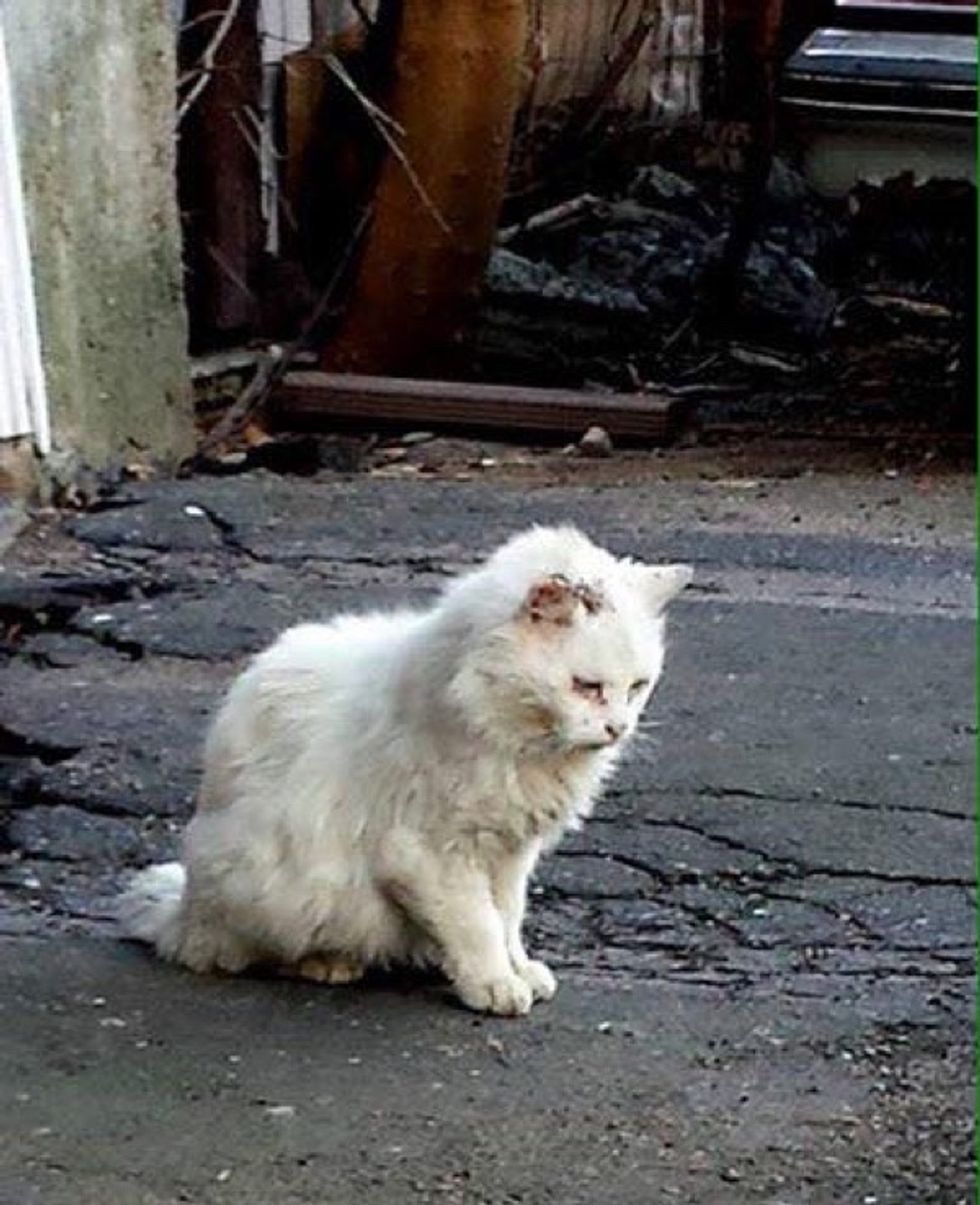 Instead of turning away in fear, one day, Coconut decided to let his human caregiver touch his head for just a second or two. That brief moment meant the world to Nelson. It was a sign that the kitty had finally started to come around.

Slowly but surely, Coconut progressed to letting his human clean his eyes. As Nelson got closer to Coconut, she discovered the reason why he had such a hard life as a feral. 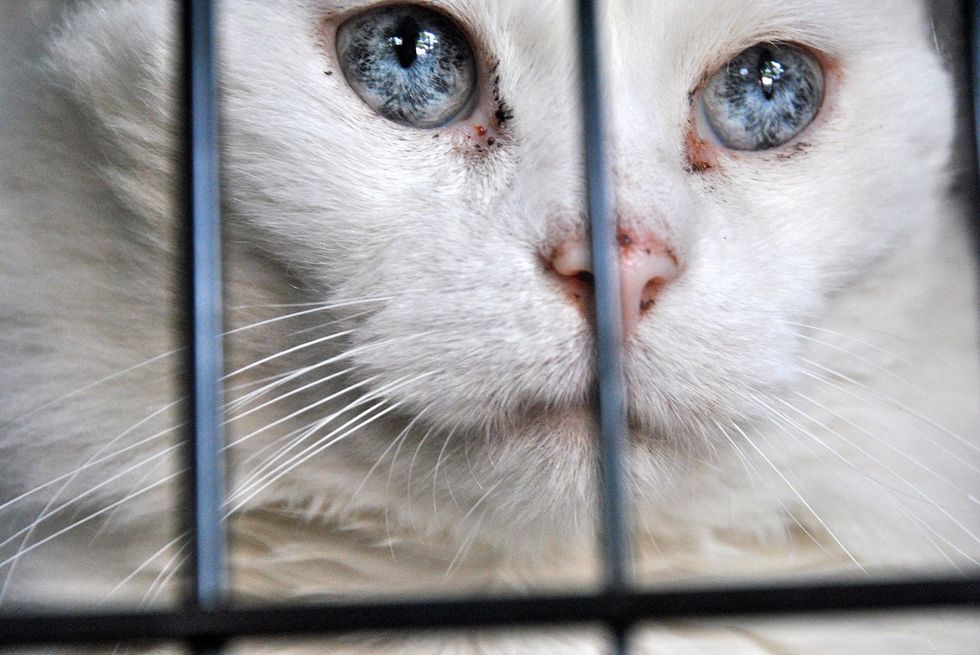 "It took two very deep bites from him to realize he was deaf and could only see shadows. He was frightened and no one knows the torture he went through living on the streets for so long in that condition." 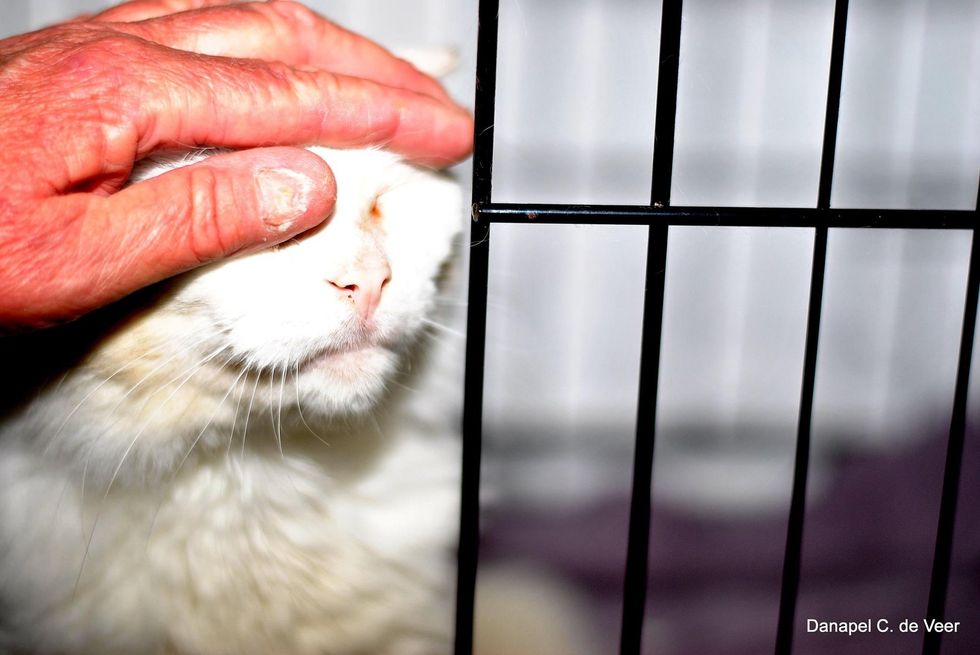 Sherri Deluca, a foster mom, learned about Coconut's plight and stepped up to help him learn to love and receive love. It wasn't easy, but it was worth every growl and scratch.

"She has her battle scars to prove it but she never gave up on him. Lots of love and attention and he learned to trust and love," Nelson said. 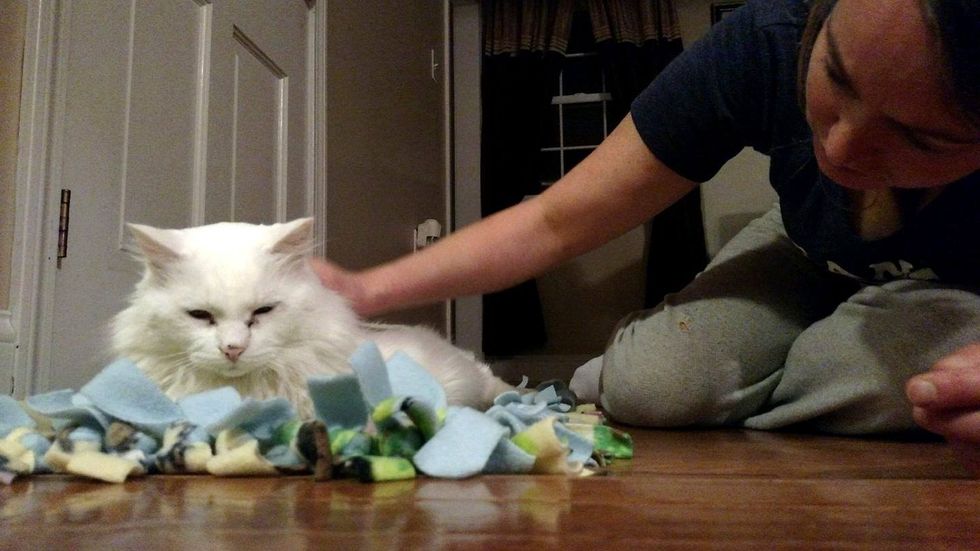 After months of unconditional love, Coconut responded with his new-found purrs and snuggles. When he experienced what it was like to be loved, he was hooked!

Ashely Ward took Coconut to his second foster home where he continued to thrive. "I admit I was very worried he would go back to being frightened and mean with strangers but after just one night of hiding he came out from under the bed in his new foster home," Nelson said. 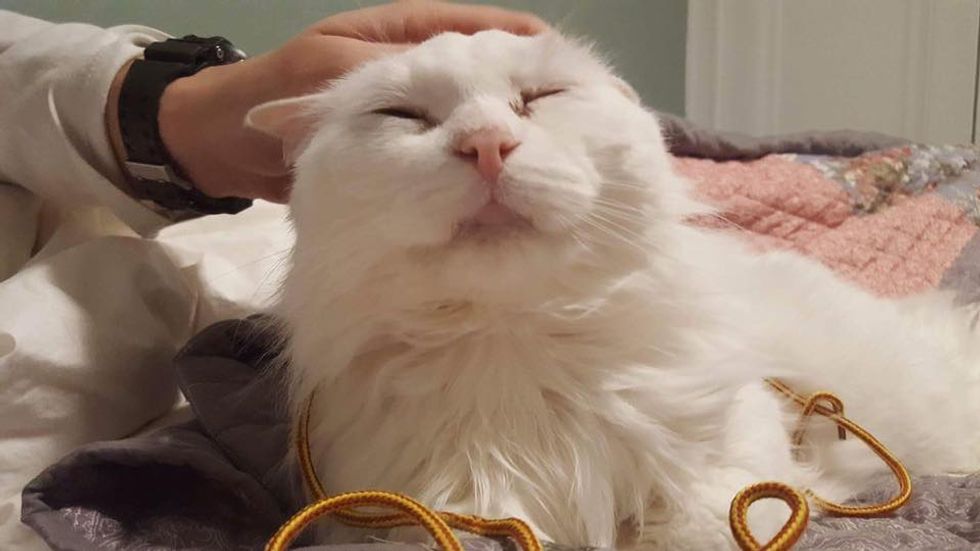 "With lots of work and attention and treats he has turned into a cat that just wants LOVE," Deluca said.

"He has come so far and I am so excited and happy for him." 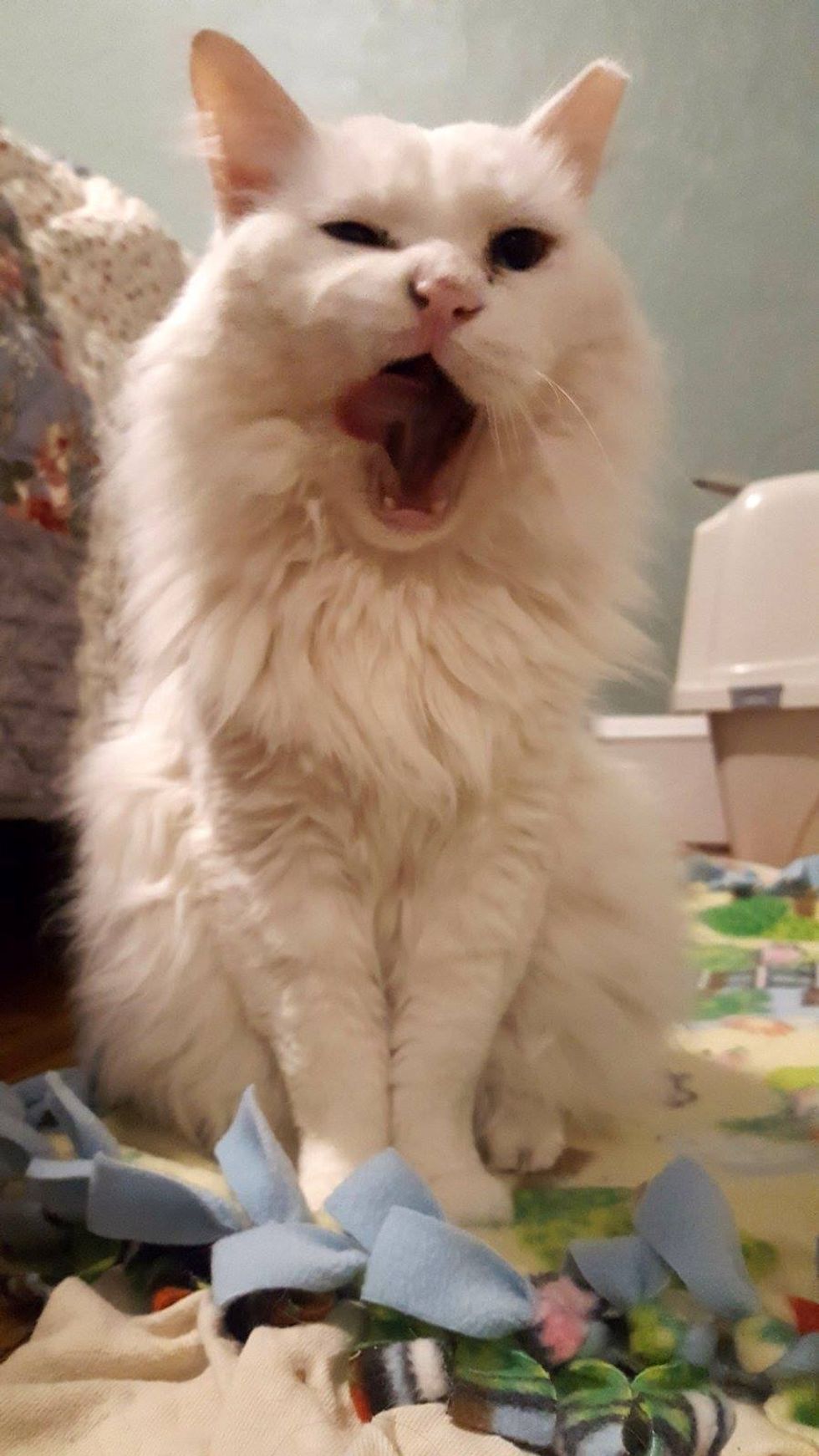 "Coconut has been through something we will never understand. Being deaf and his eyesight sacrificed living on the streets in Boston. We can only imagine. He takes time to trust. His guard is always up but he just wants to be loved," Deluca said.

"He purrs when he is petted, cries when you leave. It's complicated. But if you are a true animal person you will understand." 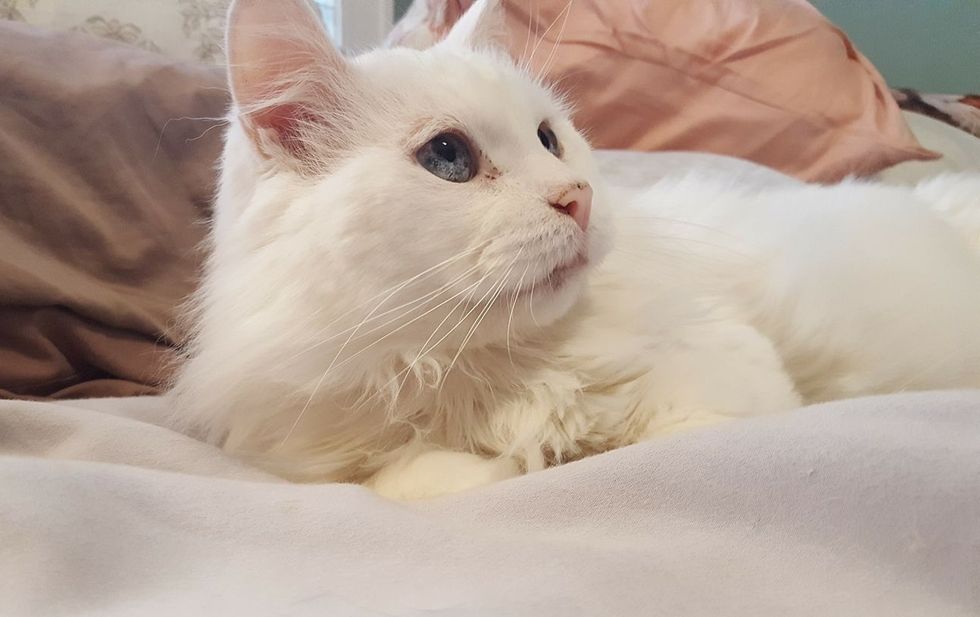 It's hard to believe that Coconut is the same cat they rescued a year ago. He's come a long way.

It's amazing what love, patience and a comfortable home can do. It has helped Coconut find love, and he's never going back.