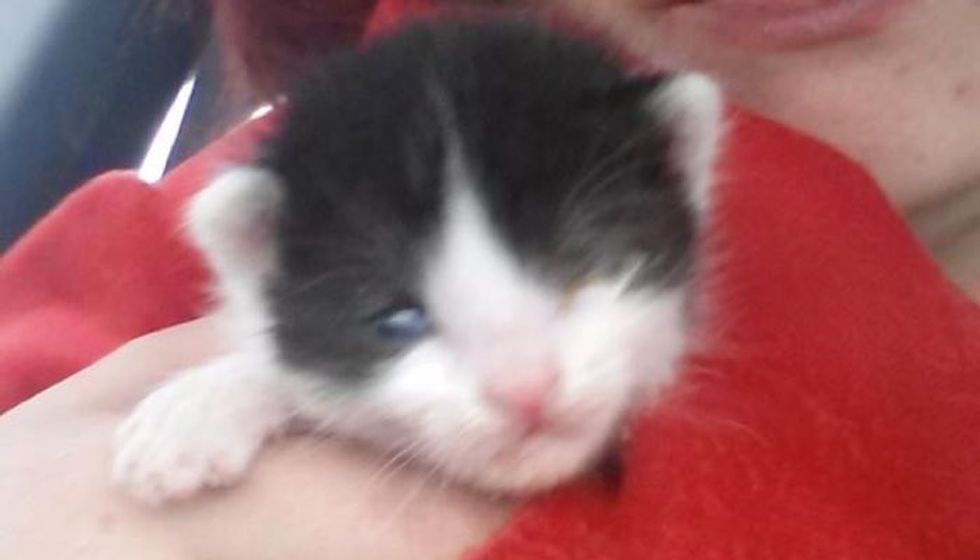 Woman who Can't Have Children Finds Kitten who Needs a Mom

A woman saved a tiny motherless kitten on the same day after she found out she could never have children on her own. "As he was being handed to me, my husband said 'Now you can be a mommy to him!'"

Jennifer Nicole Patton shares the story with Love Meow: "We found him by a bank one day while it was pouring. For a long time we couldn't get him to feed unless it was from my lips. We used the kitten milk formula and eventually we got him to suck from a tiny little bottle.

He cuddled with me on my neck every day and he thinks I'm his mommy! He changed how I think about animals and he came into my life at a very crucial moment- I was given the news that I had a very rare disease that made it so I could never have kids.

That same day we got Oreo and as he was being handed to me, my husband said 'Now you can be a mommy to him!'"

"He had goo in his right eye and we feared it to be the feline leukemia so every day I had to wash his eyes out and give him meds to help fight whatever it was - it was just dirt and grime from him being alone and sick."

A few days later, his eyes were cleared and wide opened!

"I think of him as my baby and because of him I feel loved and blessed to have him."

Oreo even helps his mom look after his siblings Nia and Cinderella from another mother.

"He ended up becoming my service cat and his training is coming along great! He helps out with my PTSD and anxiety/chronic depression. He is a sweet heart!"

If your life has been touched by a feline friend, share this beautiful story :).