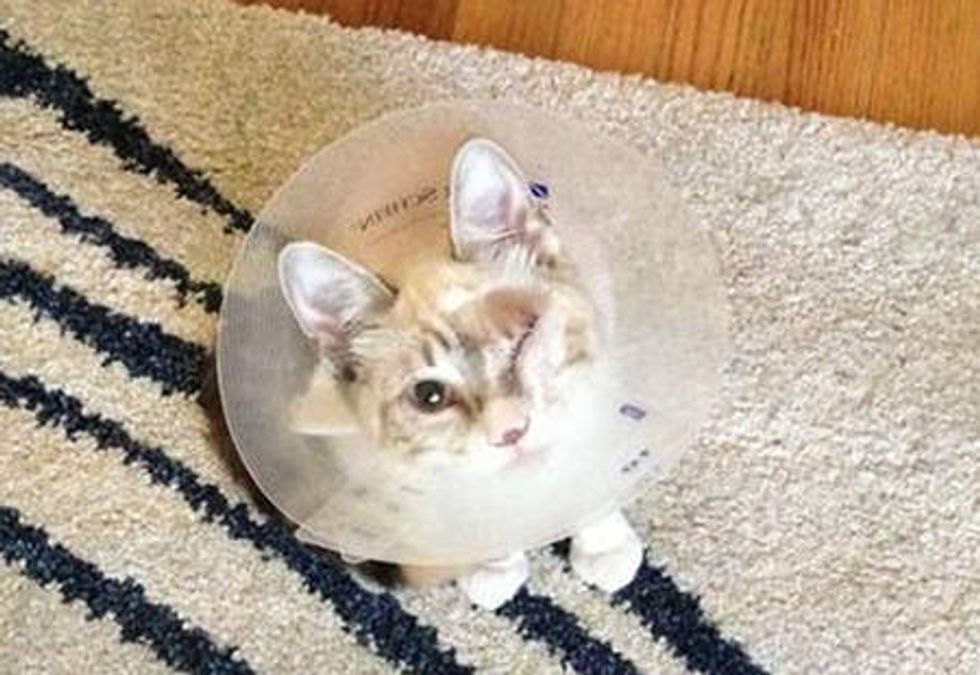 A Second Chance Changes The Life Of An One Eyed Cat

Meet Sammy who lost an eye, but gained a second chance at life. Having just one eye doesn't make her broken. All Sammy needed was an opportunity to be loved and to love in return. This is a story of a second chance and how it changes the life of a rescue cat.

Sweet Sammy was unfortunately signed to be euthanized due to her sickness. "Despite having a severe eye injury, she was still purring while we examined her eye," Deanna wrote on Facebook. "I just couldn't bear the thought of euthanizing her."

Deanna rescued the little girl and brought her into her home. While contacting local rescue groups for help and finding a way to get her the surgery she needed, Sammy stayed with Deanna and her rescue dog Murkin. "She will lose the eye; but she will gain a second chance at life," she wrote.

Deanna contacted local vets to try and get her surgery scheduled and set up a fundraiser for little Sammy. Love started pouring in from the internet. After people learned about Sammy's story, generous donations were trickling in. Soon Sammy was on her way to getting her surgery. Dr. Lori Gil came in on her day off to perform the enucleation surgery, so little Sammy wouldn't have to spend another day in pain.

With no more pain, Sammy recovered like a champ. She even followed Deanna around the house, supervising their activities. "She's such a sweet and affectionate little kitty... When she's not purring like crazy and trying to cuddle, she's batting her little paws at everything!"

Sammy is always happy for the simplest things she is given like a temporary cat seat or a random cat bed. "She looks so content and happy… One week ago, she was a different cat. Seeing her so happy brings tears to my eyes," Deanna added on Facebook.

Just a few days ago, what Deanna had been hoping for finally came true! "Little Sammy has been adopted."

Meet Sammy the cat, who lost an eye, but gained a second chance at life.

She had severe eye injury and was scheduled to be euthanized. Deanna couldn't let it happen, so rescued little Sammy and her life was forever changed.

Deanna contacted local rescue groups and vets for help and set up a fundraiser for Sammy so that she could get the surgery she needed. Love started pouring in. With generous donations from across the internet, Sammy was on her way to getting her eye fixed.

"When she's not purring like crazy and trying to cuddle, she's batting her little paws at everything!"

With no more pain, Sammy recovered quickly. She appreciates the simplest things in life and is always so happy.

Sammy getting her first lesson in Toiletry from Rupert the cat

Just a few days ago, what Deanna had been hoping for finally came true. Sammy was adopted. This is her in her new home.

Photos by Deanna via Murkin and His Kittens.