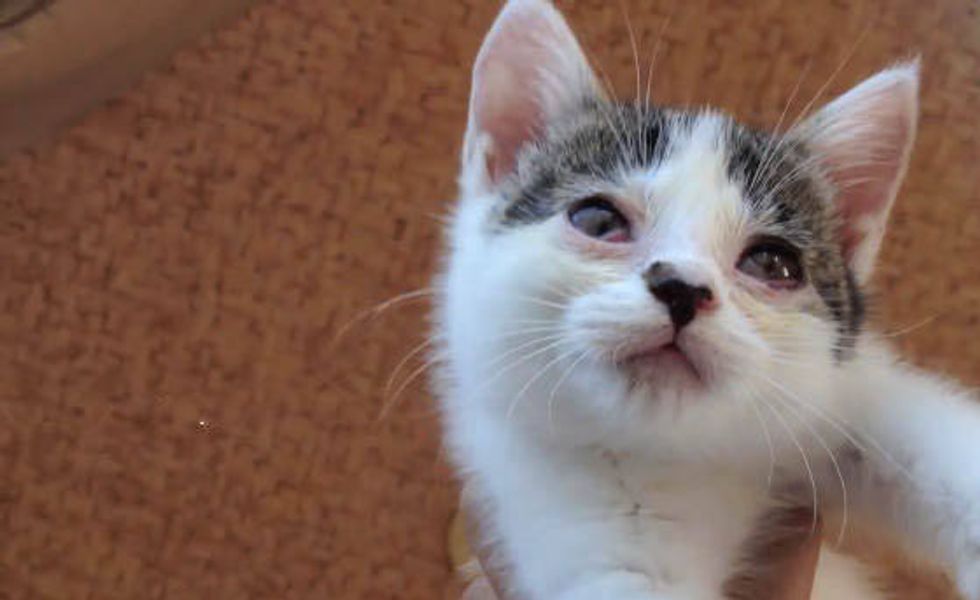 A tiny kitten was not able to see when she was found. A kind person took her home and helped her see again. "When I found her both her eyes were badly inflamed by conjunctivitis. I took her home, nursed her back to health," said MrJin650 of YouTube.

On day one, Niko was very frightened and wouldn't come out of the paper bag she took refuge in. They kept her company overnight. "She started cozying up in the small hours and after a bath became quite docile."

They were worried about her sight and tried to help her relieve some pain by cleaning her eyes with gauze pads soaked in warm water. "My kids made a house for her using a cardboard box."

During the first couple of days, Niko wasn't eating or moving much. They had to help her get the food down to keep her alive. The vet estimated her to be about one month old. After the vet's visit, everything just went better from there.

Niko learned to use her very own litter box and started gaining appetite and became more and more playful around the house. Her eyes slowly opened as they continued to heal. The little one just loved to eat and never left a bit of food behind. When she needed assistance, she meowed for help. When she needed love, she wasn't afraid to demand it. Her energy level went up.

2 weeks after the rescue, Niko could see with her own eyes and was looking much better. "When I picked her up I really didn't think she'd make it. I'm so happy she's getting well."

"In the month that we had her, no one in my family thought that Niko would turn out to be so pretty. We had so much fun while she was with us. She brought smiles to the faces of everyone who met her. Some would see Niko's fate as a kind of natural selection, and leave her rather than taking her home. There are people like that, but I believe the night I found her. (It) was a real blessing. Niko taught my kids what it means to keep a pet; the responsibilities it brings."

"On November 20 (Sunday). We sent Niko off to her new home in Kamakura."

When they found Niko, her eyes were close shut due to infection. She was hungry and scared. They took her home and spent overnight to keep her company.

"My kids made a house for her using a cardboard box." They helped her eat and cleaned her eyes to relieve some pain.

After seeing the vet, everything started to get better. Her eyes slowly opened and began to heal.

She learned to use the litter box all by herself....

...and her appetite tripled.

On day 10, the change was quite visible.

Her energy level went up and she couldn't get enough play time.

This is before they sent her off to her forever loving home. She has come a long way.

"I believe the night I found her. (It) was a real blessing."