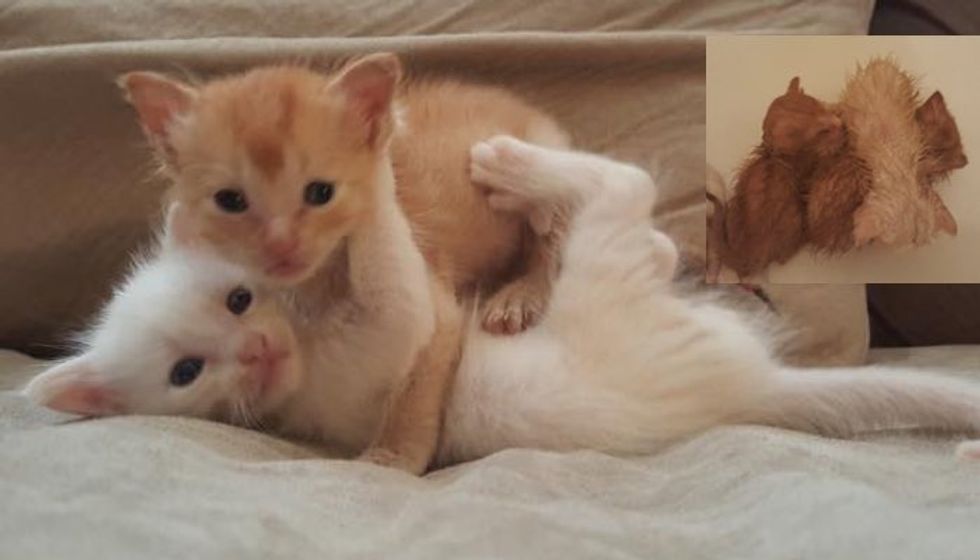 Abandoned Kittens Rescued from Garage. Look at the Transformation!

Three tiny kittens were found abandoned in a garage. They were soaking wet and their eyes were sealed shut. A few months later, look at the transformation!

"This is a trio I took in to raise. They were abandoned in a coworkers garage and she had no common sense on how to care for infants. This is their condition upon arrival. Two weeks old, but their eyes were sealed shut with gunk. I'm not sure how many days it had been since they'd been abandoned/had a proper meal, and they were covered in pee," imgur user Crunkthatlemon said.

Despite the rough beginning all three kitties are all healthy now. "I hope you guys enjoy seeing them grow as much as I did. This is the most rewarding litter I've ever raised because I had so many friends who made it a communal effort to show them love and help them grow."

After a very needed bath, they realized that one of the kittens had a white coat.

Kittens trying to work together to climb on the couch.

After a long day of playing, this fluff ball laid down for a cat nap.

They learned to climb up to their humans for snuggles.

The resident cat helped the humans babysit the tiny kittens.

These two buddies are totally inseparable. They have been adopted together!

Tyrion and Ghost snuggling in their new home.