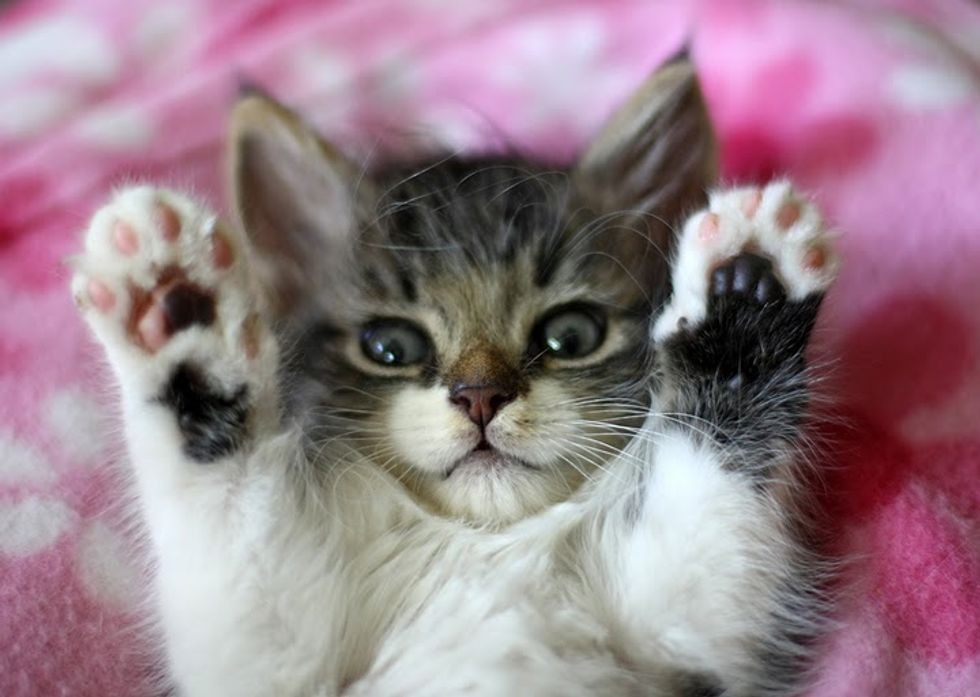 Biddy the Cat Thankful for His Second Chance at Life

One of Megan Stevens' tabby cats (GT) went missing one day. She and her husband went on an extensive search to look for their beloved cat. What they did not know was that this journey would bring back not only GT but something else special.

Photos and Story courtesy of ©Megan Stevens: You can visit her website here.

We expanded our search and flyer posting to several miles out into the country where we had known of stray colonies. One of the locations we checked no longer had any cats (we left some food just in case) but we did see and hear some kittens crying near the river. Upon a closer look we could see two small kittens but no mother.

There were also some young children that were trying to coax the scared kittens out from under the bushes. I asked the little girl if they were her kittens and she indicated yes. Then I asked her if she brought them with her and she said yes again.

As we left I told the little girl to make sure she didn't leave without getting them and taking them home. Of course it is also possible that the children did not bring them but hoped to leave with them.

All week long we knew in the back of our minds that the chance of the kittens being left behind was extremely high so one week later we drove back out to the location by the river and sure enough, there was still one kitten hiding out under the bushes.

Art (husband) tried to get it by a food offering but quickly realized that was not going to work. He climbed through some rasberry bushes, enduring mosquito bites and thorns for just the right opportunity to quickly grab the tiny hungry kitten, wrap him in a shirt and we drive back home.

Obviously this little guy had not eaten properly for at least a week and was very timid if loose on the ground, but was purring louder every hour when handled and was making up for any meals he might have missed. (The kitty was named Biddy)

Biddy really is my special little friend who seems very appreciative of my husband's rescue and my constant affection. He's such an easy going little guy who is well received by our other cats as he lives in a home of nine felines.

Today Biddy has turned into a beautiful and gorgeous cat. Isn't he handsome?