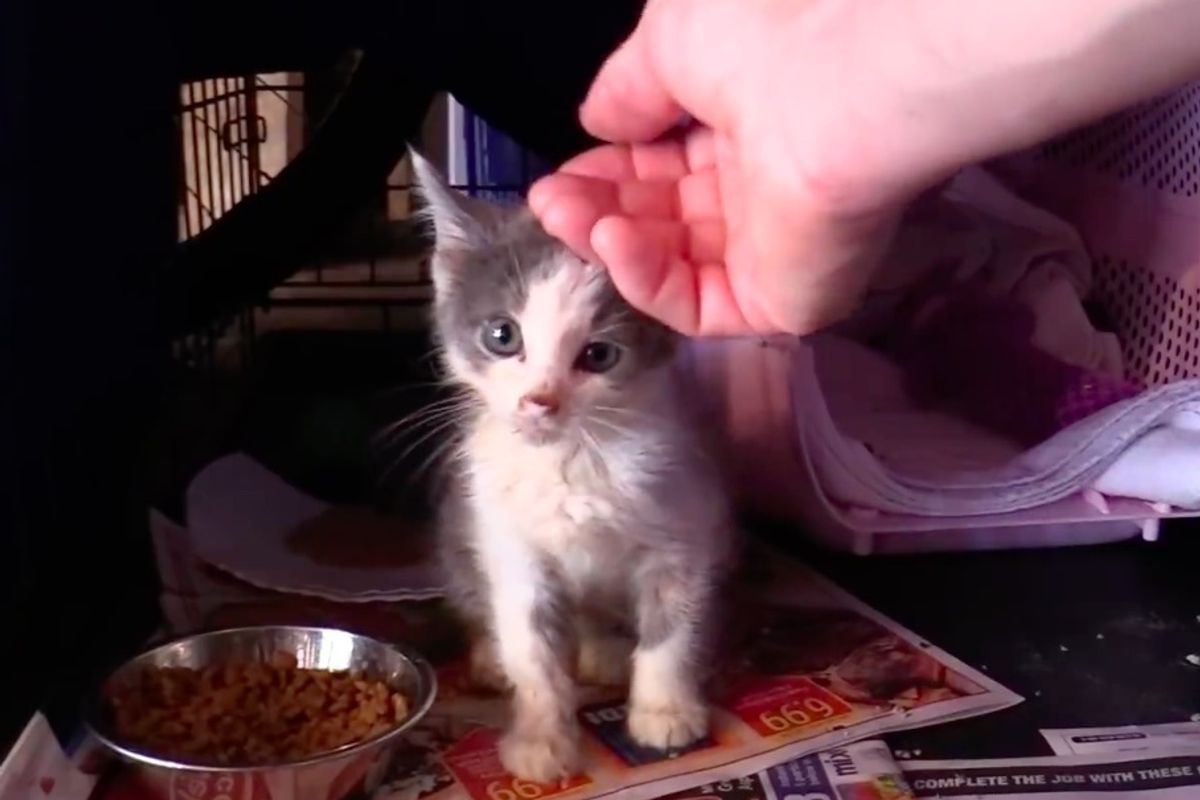 Cat Man and Team Bring Kitten Back to Life and Help Her Find Her Meow - Now 5 Months Later.

A cat guy teamed up with two other rescuers to save the lives of 40+ cats from a house in horrific condition.

One of the kittens was so weak that they thought she had passed in the carrier, but the little one hung on for dear life.

Chris Poole (Cat Man Chris of Cole and Marmalade) and sisters Deb Meckl Parquette and Diane Harris were shocked when they entered a property that had been vacated for months in Northern Illinois. 40+ cats and kittens were taken out to safety, and among those rescued, a tiny kitten was barely breathing.

"We rushed her to the nearest vet clinic. They advised us to euthanize her, but we felt differently," Chris shared with Love Meow.

They took the kitten to their local vet where they immediately started to treat the kitten as she was quickly fading. The little one was severely malnourished and infested with fleas. "She had a bite wound on her neck and was anemic due to blood loss, but she never stopped fighting."

They gave her some kitten food and she scarfed it right down. Despite all the odds against her, she showed just how much she wanted to live and her rescuers were fighting along with her.

After several baths and picking off all the fleas, one by one, she was finally flea free! They named her Princess.

Chris took the little fighter home to foster and watched over her while she was recovering from a long ordeal. In just a couple of days, she regained her appetite and started to meow.

When they came in with a plate of kitten food, she meowed aloud to demand feeding — a complete 180 from where she was just a few days ago.

They gave her antibiotics for the bite wound that she had. Later, a vet tech took her into her care so she could treat an abscess that formed on her neck.

Little Princess kept on fighting to get bigger and stronger. The vocal little kitty meowed every day to remind her caregiver just how much she loved life.

Five months later, Chris went to visit Princess at her new home. He was amazed by how far she'd come.

The emaciated little kitten they rescued from the hoarding house, has transformed into a gorgeous lady cat. Princess is healthy, playful and full of energy.

She walked up to Cat Man Chris and nudged her nose on his hand as if to say "thank you for not giving up on me."

"This kitten had an amazing will to survive, she had been through so much we couldn't give up on her! … What an amazing transformation."

Share this story with your friends. Follow Cat Man Chris and Cole and Marmalade. Deb and Diane are starting their own shelter, if you would like to support their rescue efforts, click here to see how you can help.