A kind-hearted woman found the tiniest kitten she had ever seen and went on an incredible journey to save the kitty. 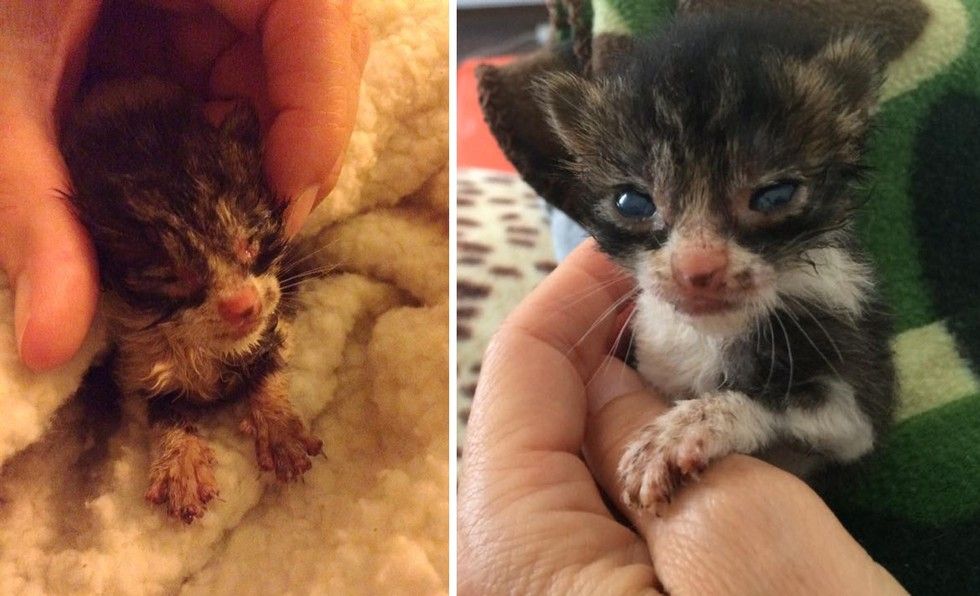 On the day he was rescued (left), 14 hours after (right)Photo: Joan Bowell of God's Little People

Joan Bowell has rescued and cared for many cats on a little Greek island. As she was feeding the cats one evening, she heard some piercing kitten cries but didn't see a mama cat in sight, so she decided to trace where the sound came from.

"Only 10 meters into the field among some tall bamboo I was met by this sight," Bowell wrote. "One kitten had sadly died already and this sad and filthy (and eye closed shut from infection) was the one pitifully crying for help."

The baby was severely malnourished and weak. He looked like he hadn't been fed for days. "I may be wrong but it looks like momma has given up on the situation."

She cleaned the kitten's eyes so they could finally open a bit. She gently washed the frail baby and treated him for fleas and infected eyes and fed him some kitten formula that he was too weak to drink right away.

After a few attempts to feed, she tucked the baby in a box with a warm water bottle to help raise his body temperature back to normal. "Within 14 hours his eyes have gone from being shut closed as if glued and now to both eyes being open."

He was the most scrawny little thing they had seen, but Chili was strong despite his size. 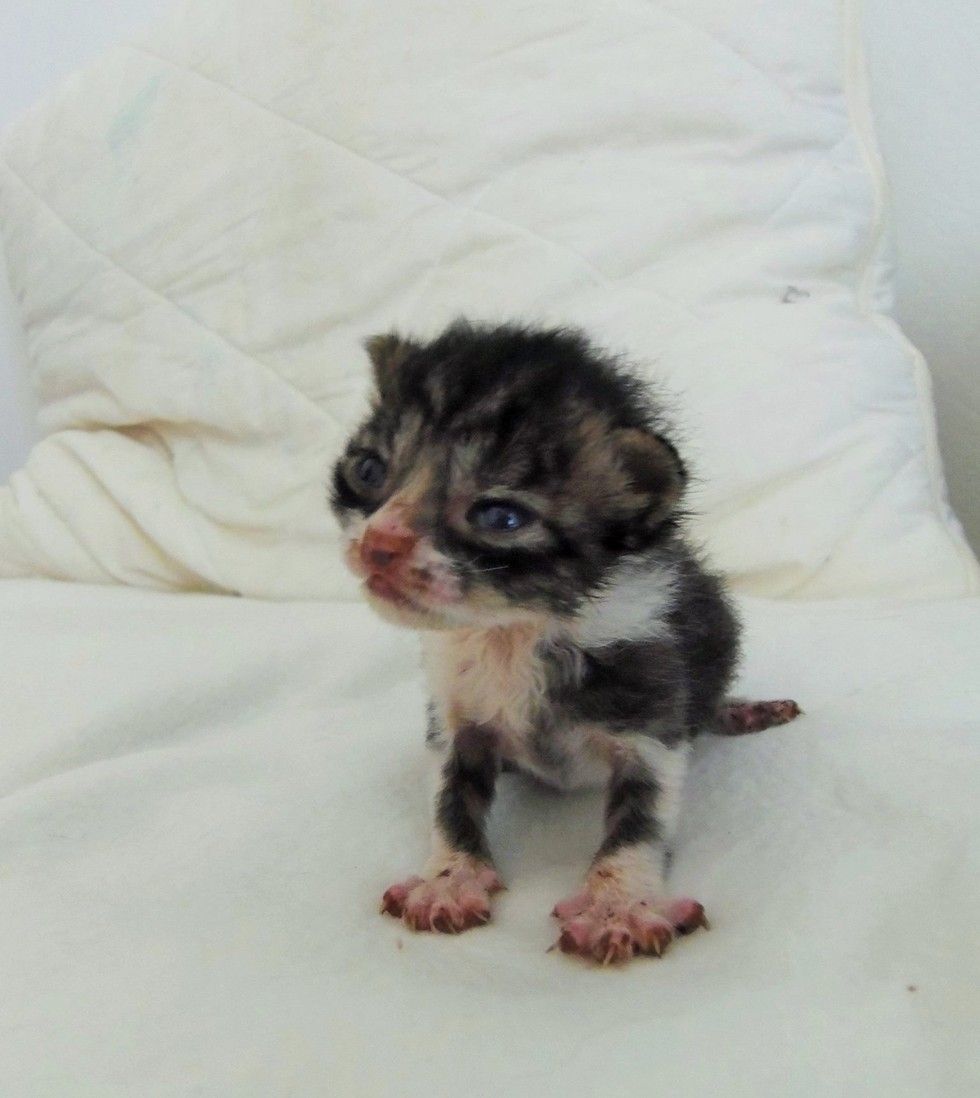 When he was ready, Joan introduced him to his new sisters, rescue kitties, Kaneli & Vanilla, hoping this would boost his immune system and keep up his appetite which really increased over night.

"His sisters have given him back hope - they provide such physical comfort for him -something he sadly appeared to have been deprived of," Bowell said.

"I think he had already entered into the 'twilight zone' when I found him but he's got an amazing fighter spirit and has already made an incredible recovery!" 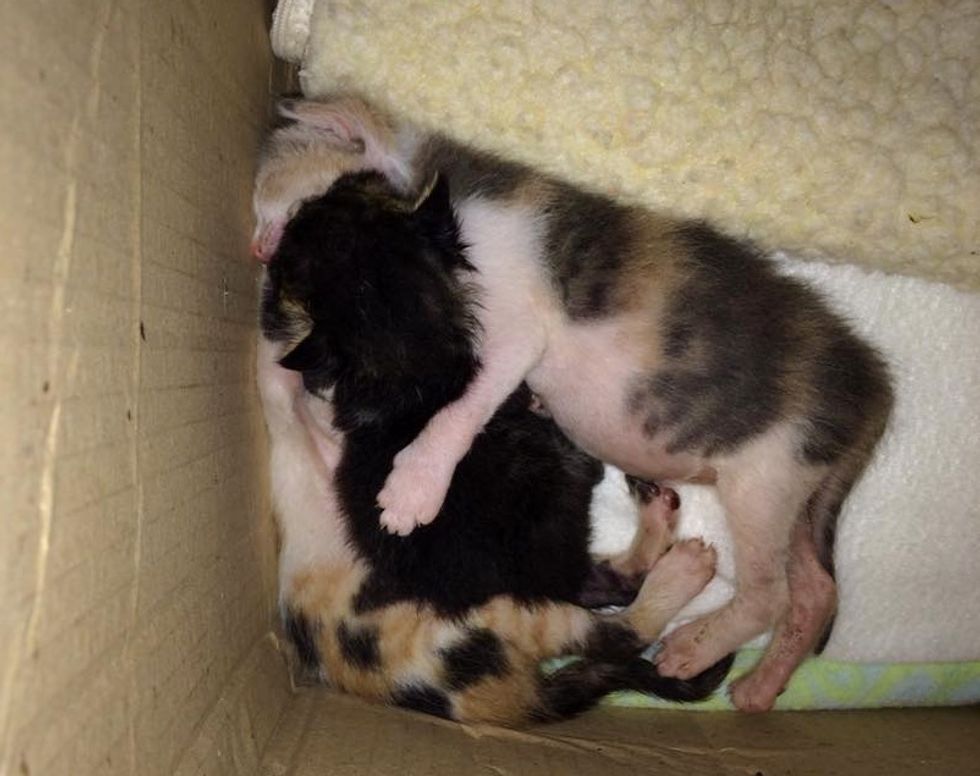 "He has a constant need for physical contact and the sisters provide that beautifully but because he's been deprived of food for a very long time he also constantly looks for milk."

Chili is unbelievably tiny but he is fighting hard every day to get better and stronger. "He no longer whimpers when he sleeps. He's a true miracle!" 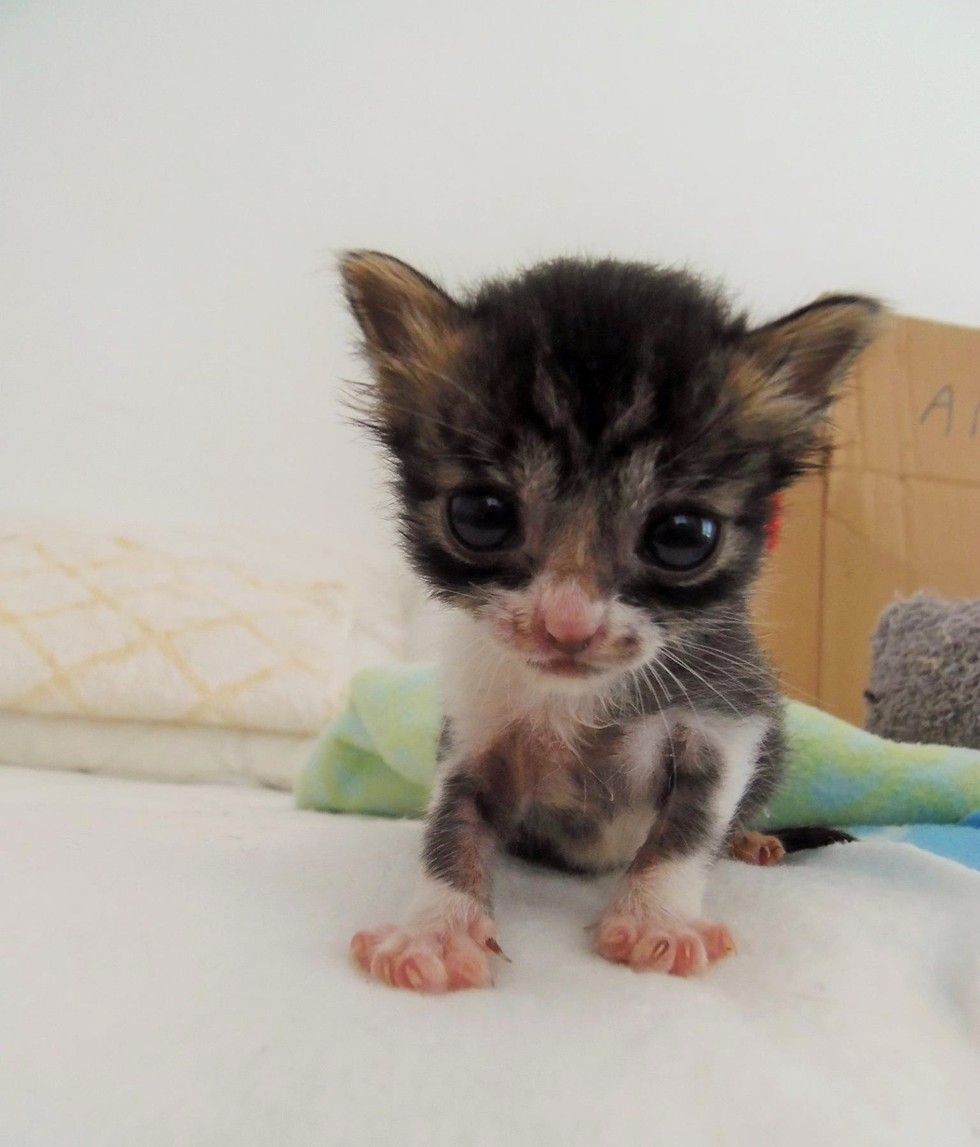 Over the next several weeks, it was touch and go at times, but Chili was never alone. Bowell was there watching over him every step of the way. With his strong will, the little ball of fur triumphed time and time again.

For the first time, Chili was catching up in size with his sisters. 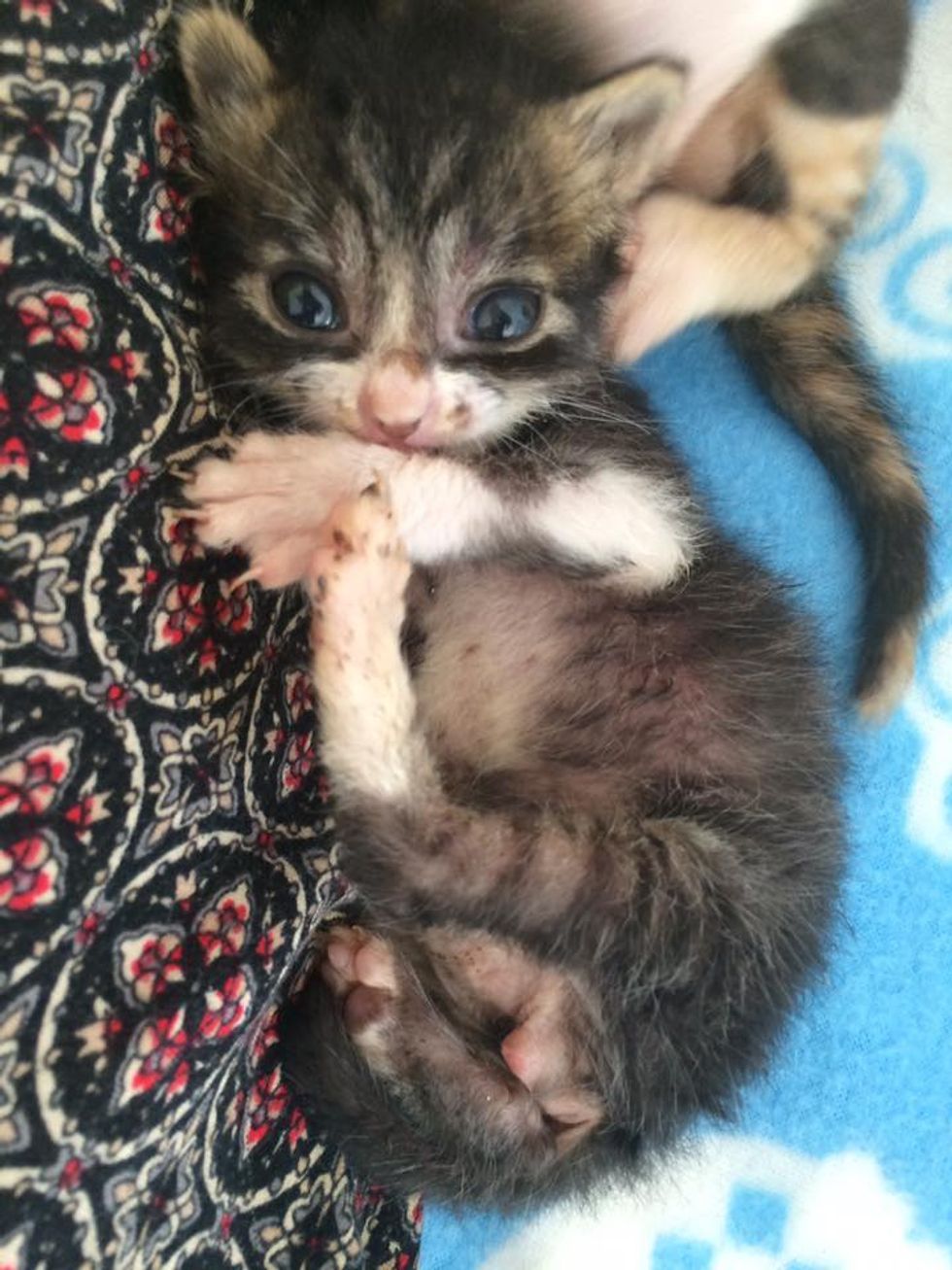 The incredible bond he shares with his sisters.

"When I just went to prepare some food for them all the girls had climbed up from the floor and snuggled in with their brother!" Powell said. "Same thing after eating - they usually try to wrestle with him but they just carefully placed themselves on either side of him and fell asleep." 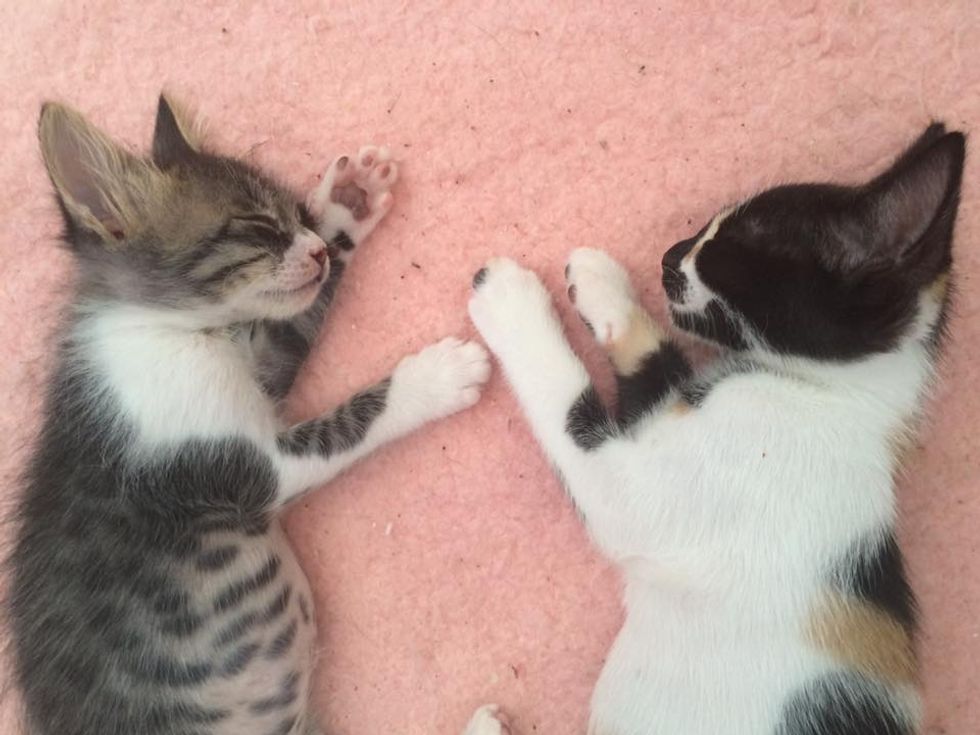 "He's becoming a big boy but he's still enough of a baby to seek out my hand for a comfort suckle. Afterwards he acts like he's had a hearty meal and goes to sleep with a belly full - well, if of nothing else then full of love and contentment."

Chili has the biggest appetite of all the kitties there. 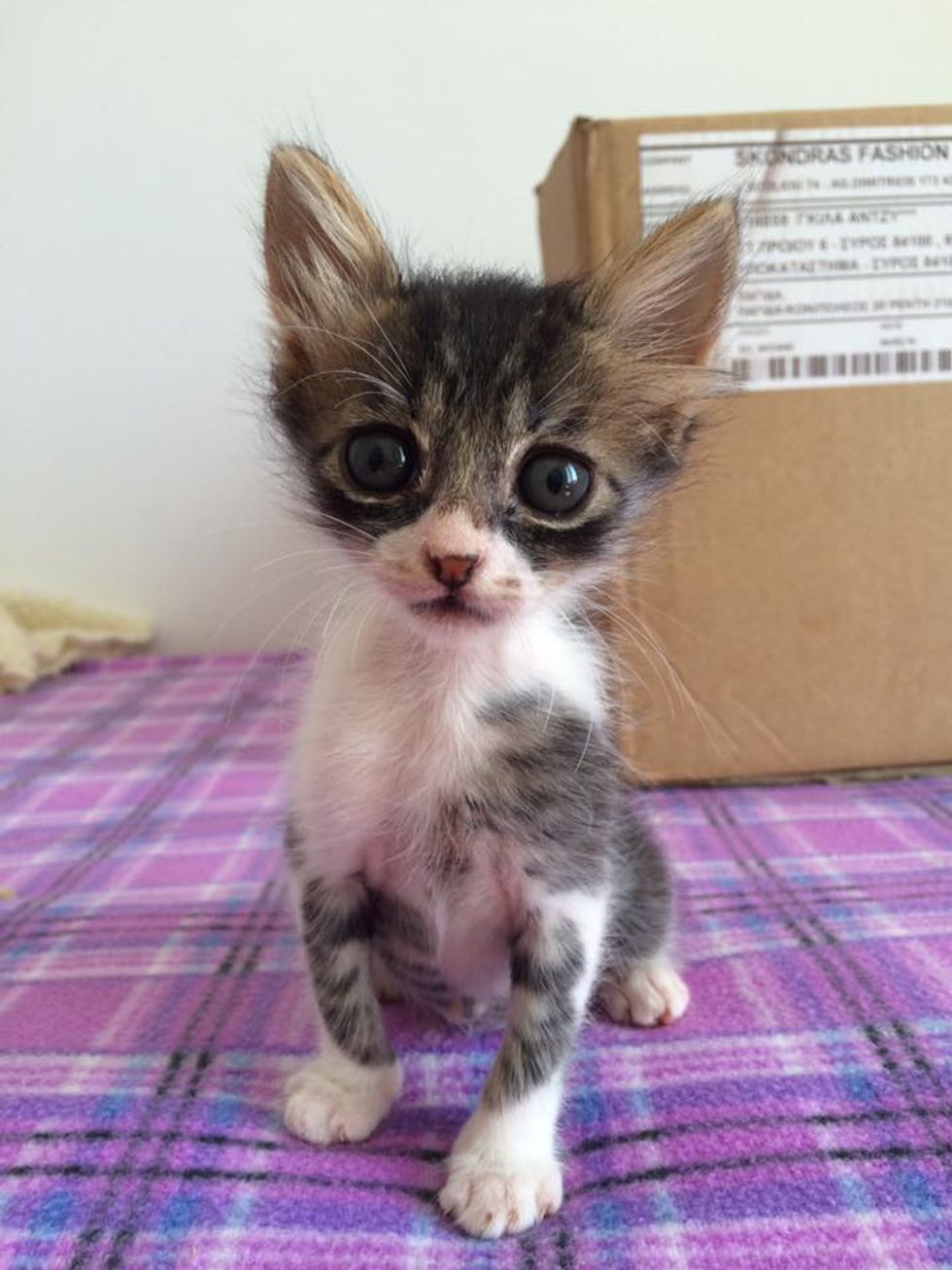 "He's a lot smaller than the girls but has much bigger eyes."

The two sisters are very protective of their brother who isn't so little any more. 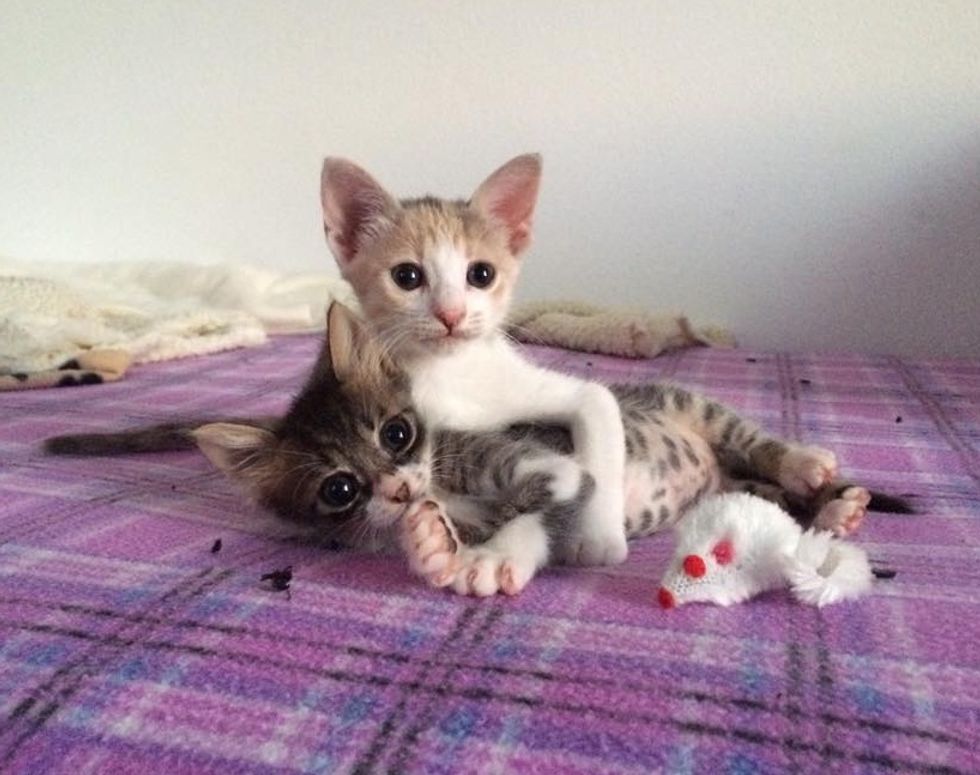 "Apart from his huge 'tea-cup' eyes his proportions are finally starting to fall into place," Bowell said. "He is growing so rapidly now but he is still stinkin' cute and I hope those huge eyes stay the same." 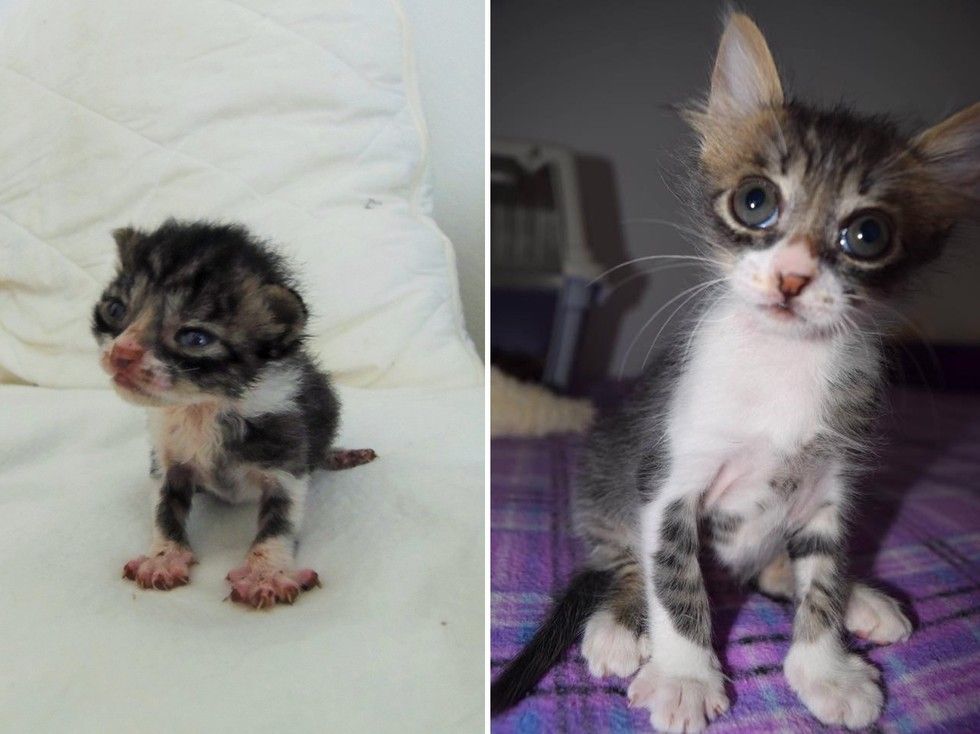 The kittens have gotten a lot bigger, but Chili still clings to his human mama.

"I leave food for them and they seem happy to play, romp and collapse on top of each other when they get tired. But Chili is letting me know that he still needs lots of reassurance and personal attention so I spend a lot of time just sitting with him and letting him suckle my hand.

"I believe his beautiful little soul has healed from his traumatic start to life but there's no doubt the experience has left an indelible print on his psyche. He's the sweetest little thing on earth and I love being his human mama." 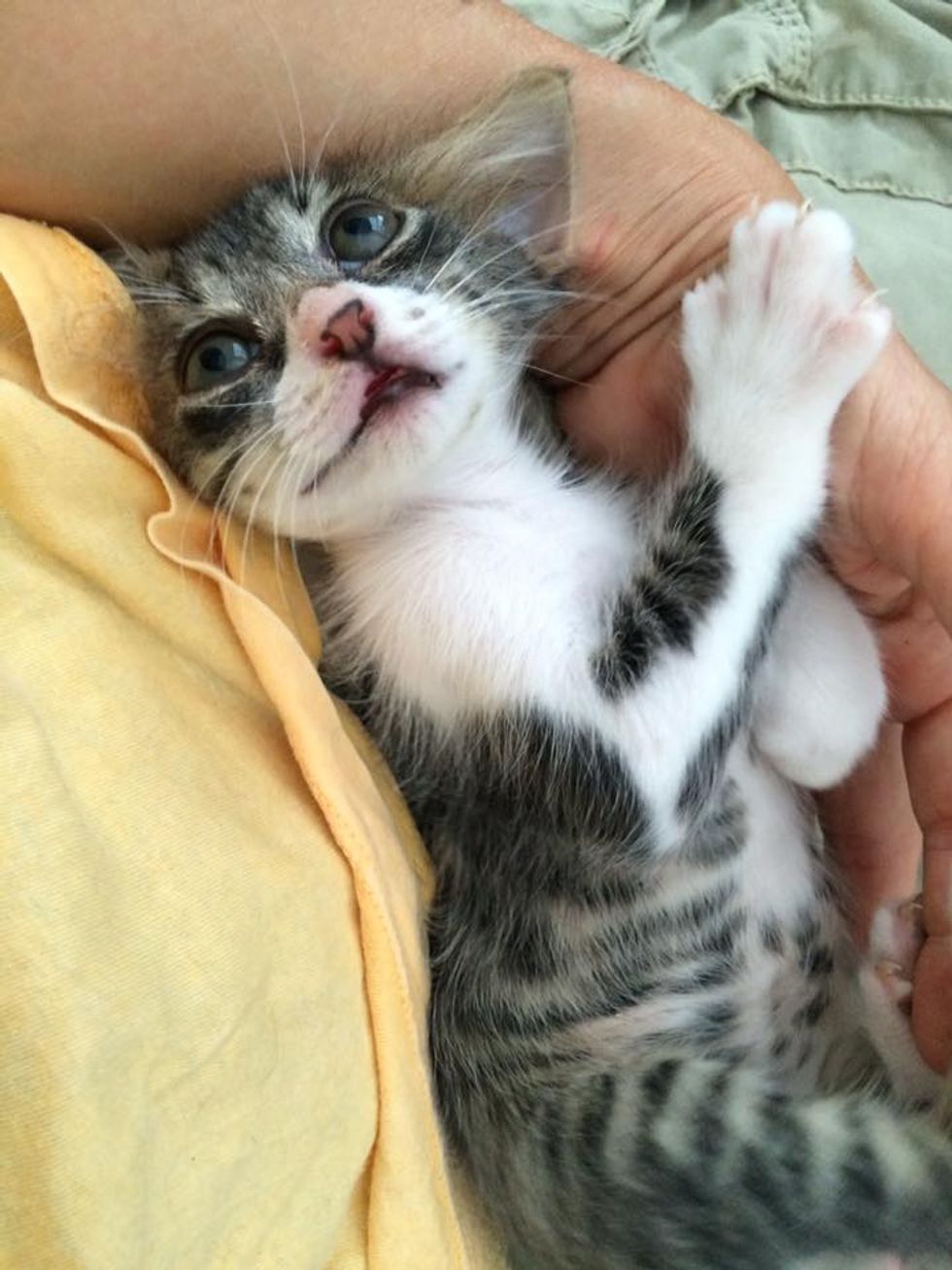 On the day Chili was found, she didn't know if he would make the journey back to the house. "But he had a remarkable will to live, so he battled through," Bowell said.

Look at those big paws and strong legs! "He is developing broad bones and his head is already bigger than his sisters. I think he's going to be a giant!" 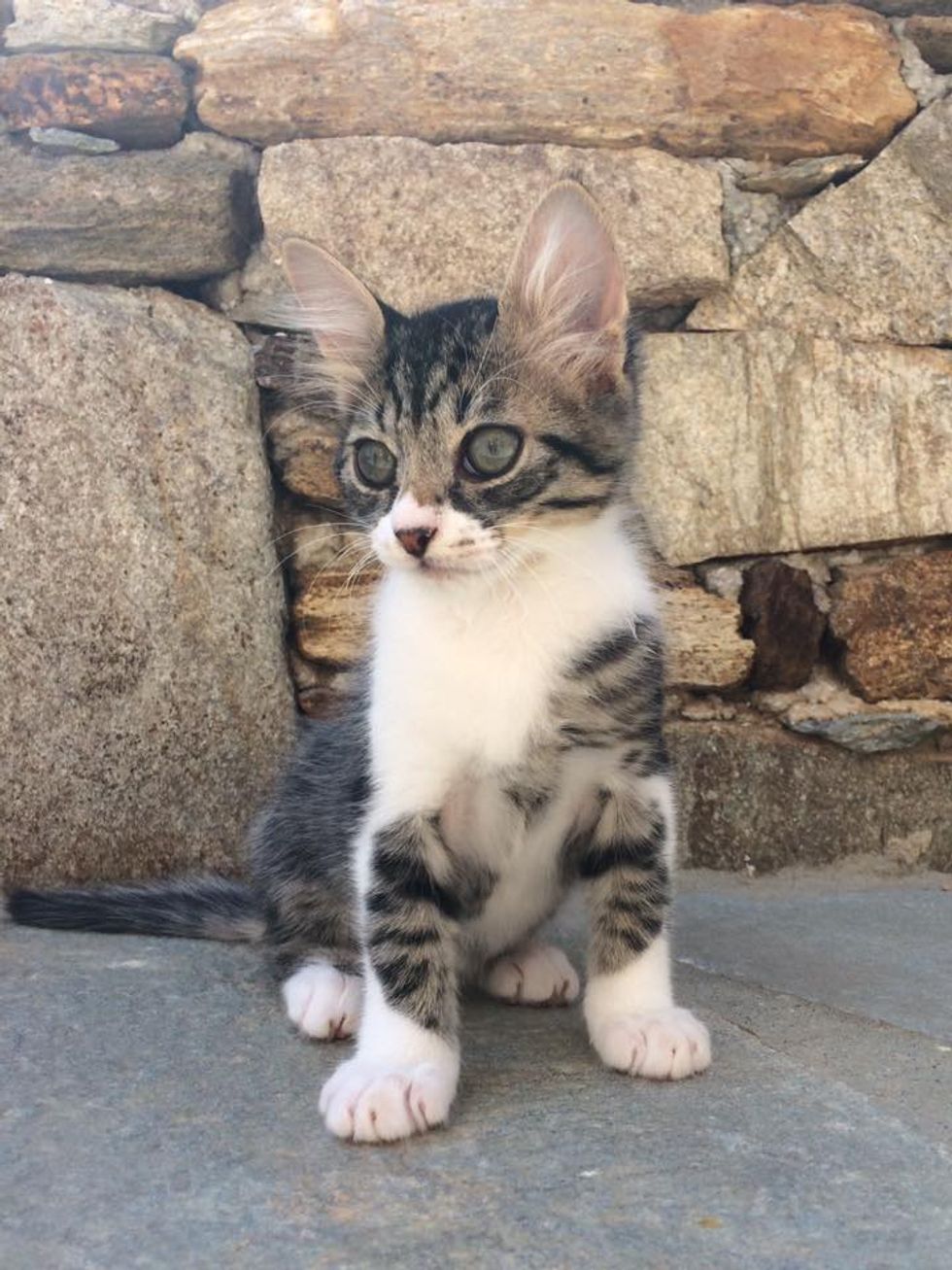 Chili all grown up now! 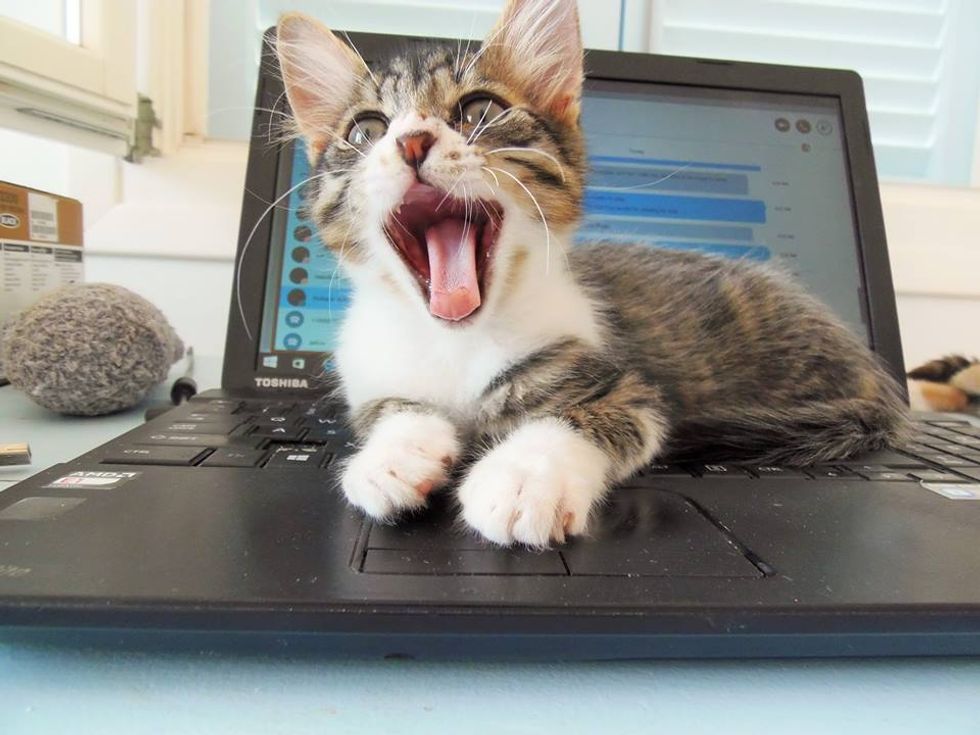 What a handsome boy he's become! 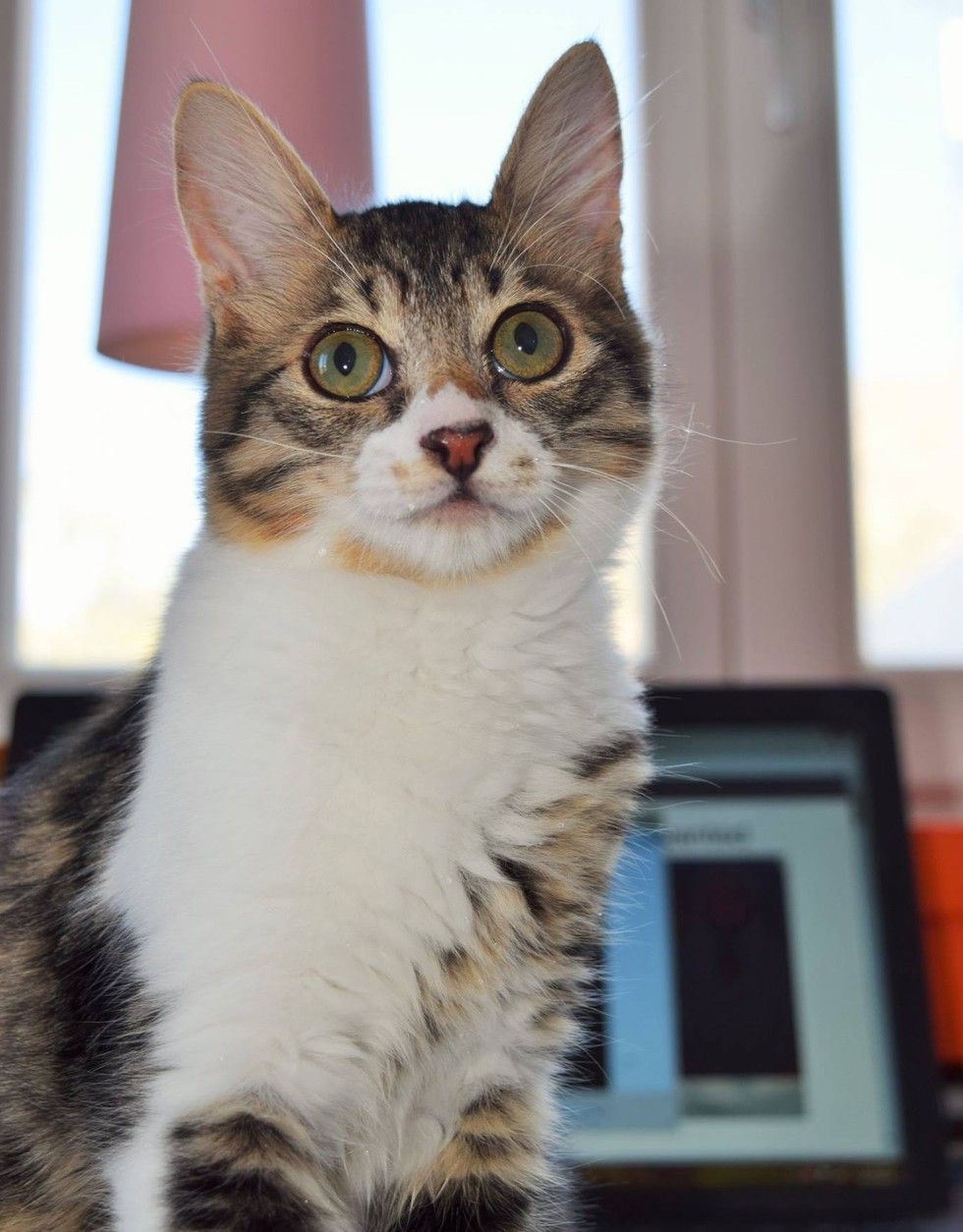 Share this amazing story with your friends. You can follow Chili and Bowell's other rescues on Facebook. See more of her rescue work on God's Little People.