Cat Who Was 18 Years Old When He Asked Man to Take Him Home, Now Turns 20

A cat was 18 years old when he found his forever human. He has never left his side since. 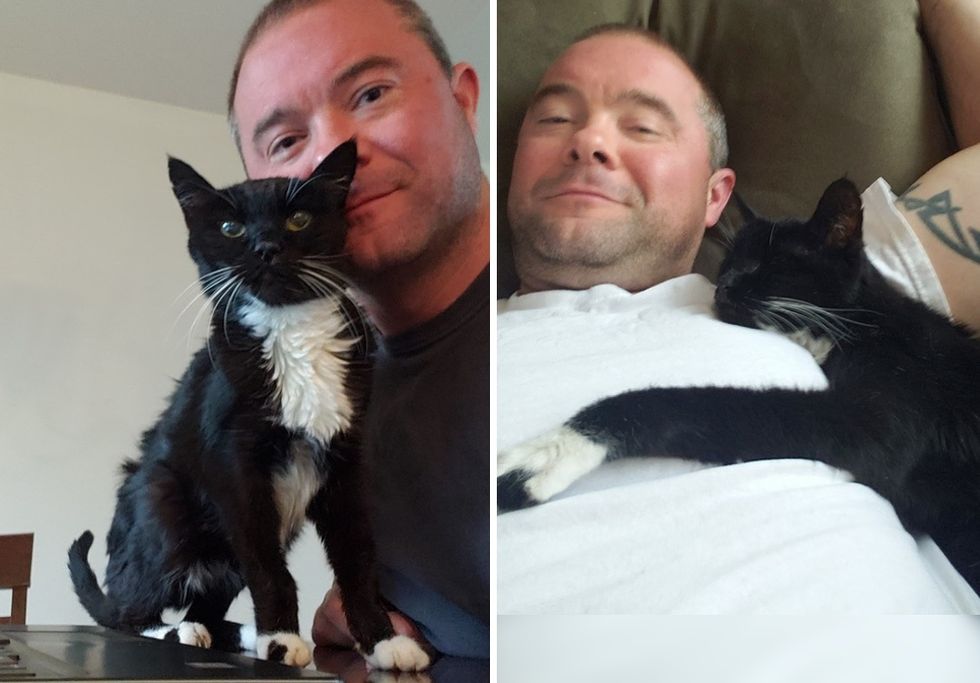 Purrfect Pals Cat Sanctuary and Adoption Centers in Arlington, Washington rescued an 18-year-old cat from a public shelter so he could have a chance at a better life. The tuxedo was surrendered to the shelter when his owner could no longer keep him.

The sweet senior showed incredible resilience and quickly won the hearts of staff and volunteers. "He is a classy little pocket kitty, wearing a spiffy tuxedo coat with white mittens," Purrfect Pals said. "As befits his age, he's a mellow guy, adept at handling whatever life brings his way."

The rescue began seeking the perfect home for the deserving senior. He needed a place where he could feel safe and comfortable lounging about, snoozing or cuddling his golden years.

"Cats like him belong in homes with people to call their own, sunshine to warm their bones and soft places to lay their heads," Purrfect Pal added. "No shelter comes close to being that home." 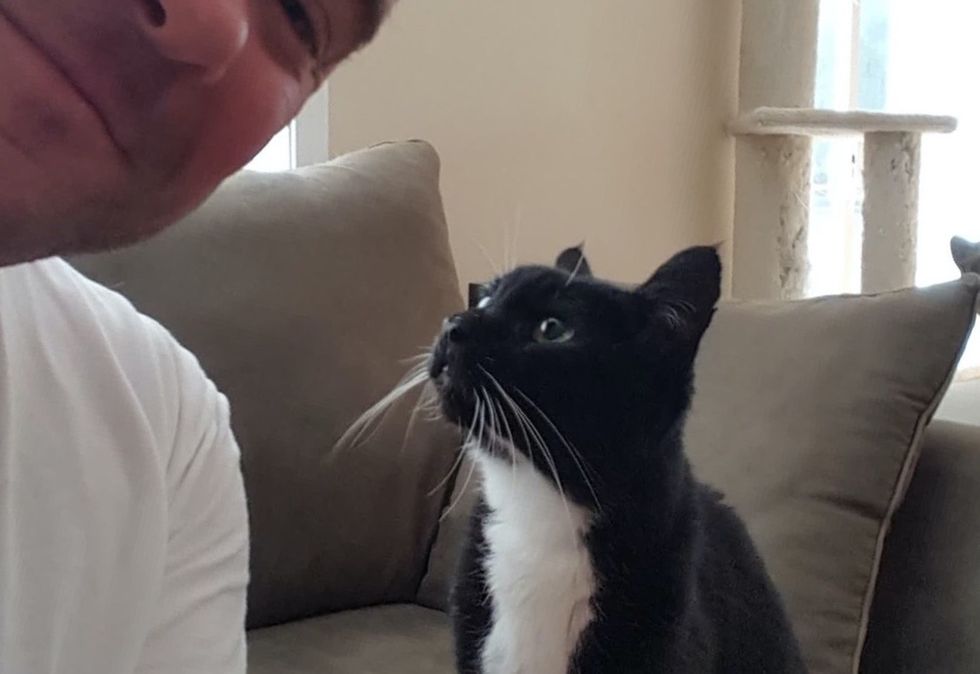 Tim Adams, who had a senior cat of his own, was captivated by Sammy's story and fell instantly in love. "I know that people don't generally want to adopt senior pets. I decided to go see him," Tim shared with Love Meow.

Upon arrival, he saw Sammy sitting alone at the adoption center, looking a bit dejected. When he walked up to Sammy, the tuxedo perked up and took quite a liking to him.

"Sammy rubbed his face on my hands over and over. He bonded with me right away," Tim said. "I knew I would be taking him home." 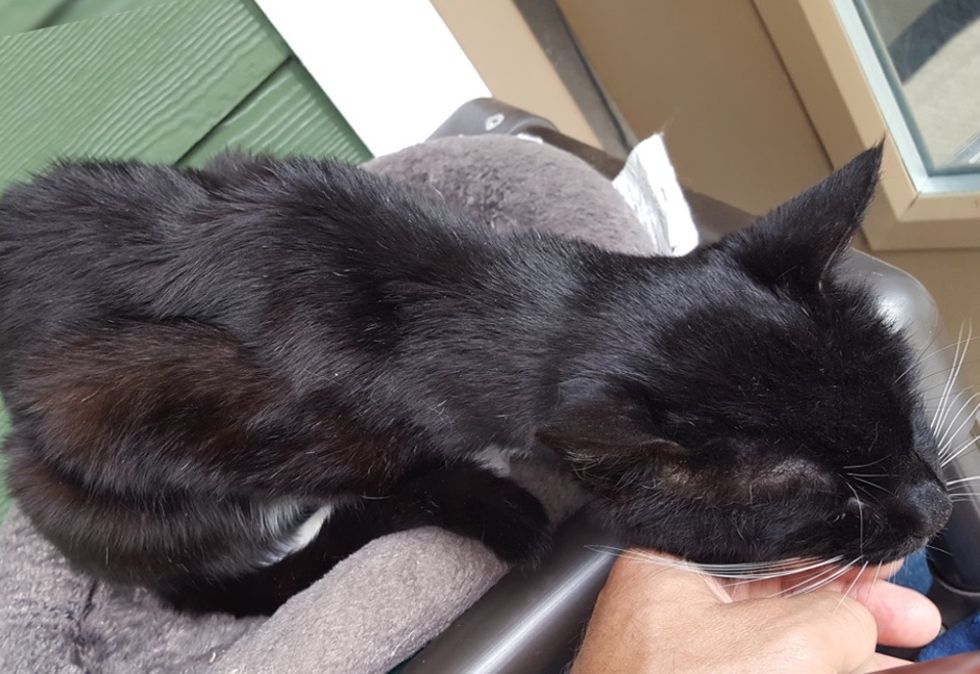 At 18 years old, the tuxedo came with some chronic medical issues which required him to be on a specific diet, but that didn't deter Tim at all, whose own cat had the same special needs.

Sammy bid farewell to the shelter life and moved into his new abode. For the first few days, he clung to human dad, following him everywhere around the house. He would curl up in his lap or wrap his arms around him whenever he got a chance. 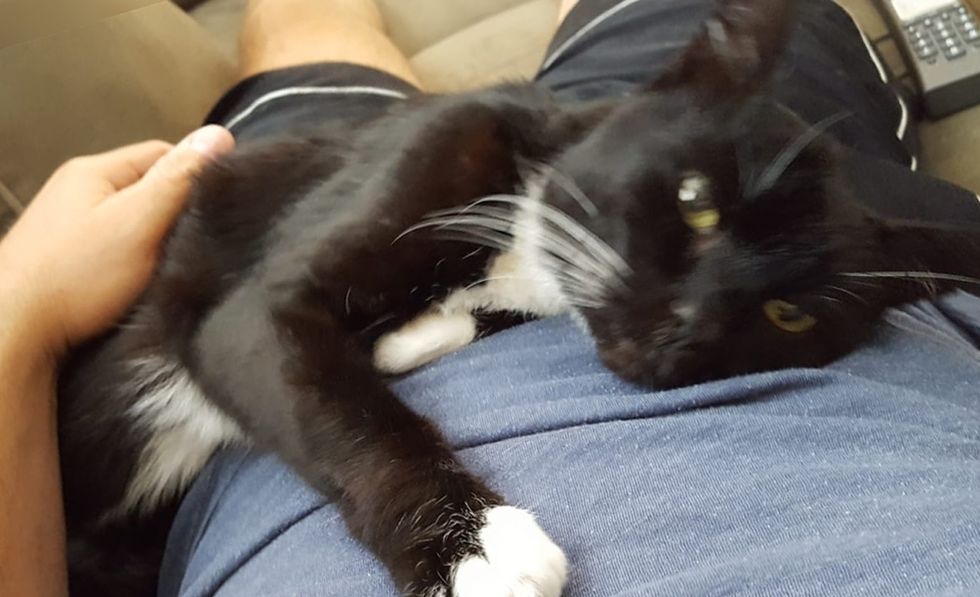 The sweet senior really blossomed at his forever home with all the cuddles he could get. Tim found himself waking up to a purring kitty in his arms in the morning, and his lap became Sammy's favorite napping spot.

The tuxedo has a distinct purr that sounds like a combination of purrs and chirps. When he gets chin rubs, he immediately switches on his purr motor, rumbling about in pure bliss. 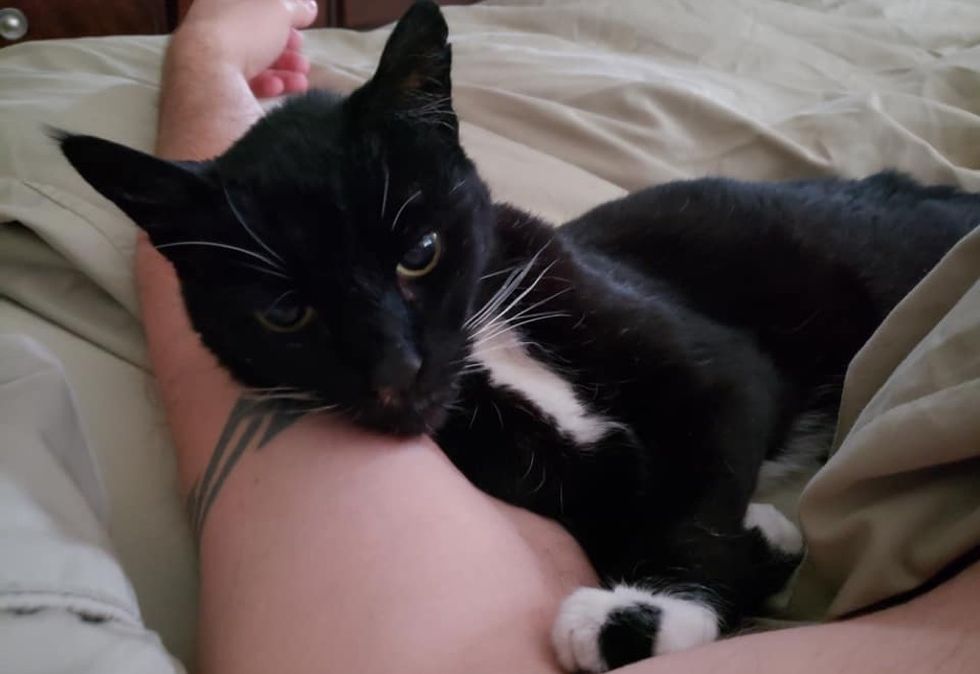 Sammy is not much of a talker, but he surely knows how to tug at his human's heartstrings with his adorable silent meow. Nothing makes him happier than having some one-on-one time with his dad.

"He is gentle, patient and super affectionate," Tim told Love Meow. "His favorite things to do are lay in the sun or lay in my lap." 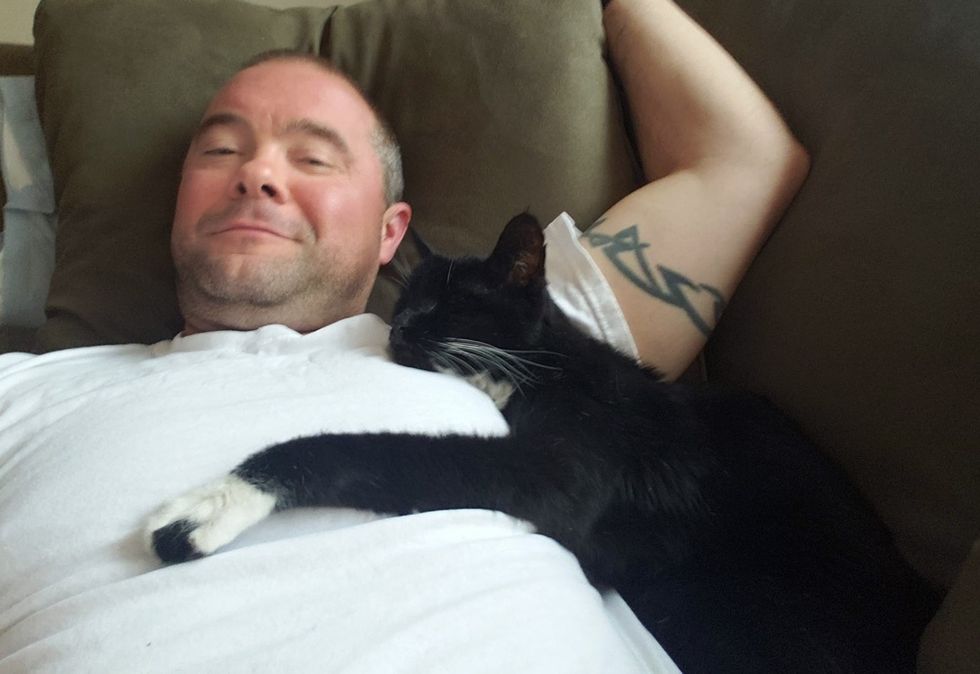 The tuxedo just turned 20 years old this May. Tim celebrated this incredible milestone with his best friend by making him a cake filled with his favorite cat food and treats.

After eating to his heart's content, Sammy snuggled up to his human dad before purring himself to sleep. 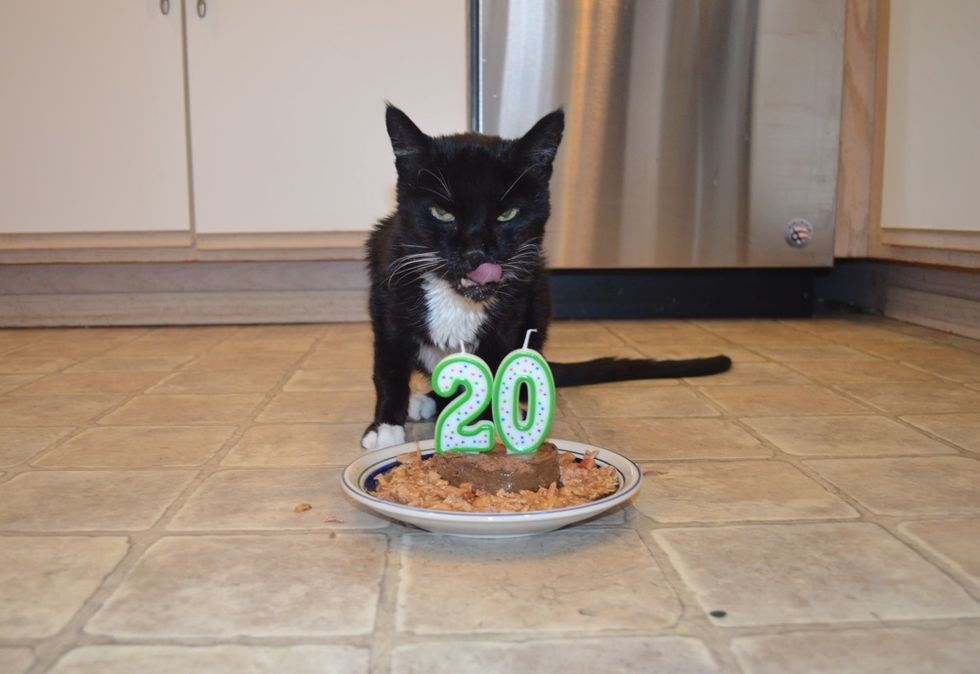 Over the last two amazing years, Sammy has been Tim's most loyal companion and lap warmer. He fills the house with his sweet purrs and chirps and is never in short supply of cuddles.

The cuddle-bug is so happy and content knowing he has a place of his own and a forever human to spend his retirement with. 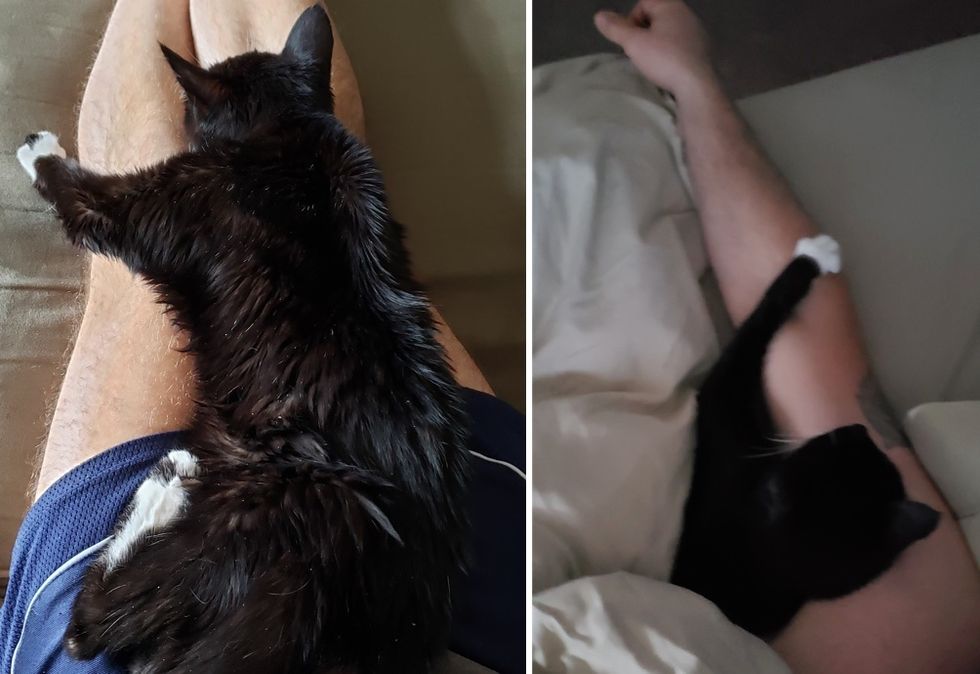 "I would tell others to take the chance and adopt senior pets. You're likely to get the sweetest, most loving, most thankful pet you've ever had. Sammy requires some extra effort, but I'm so happy to do it for him," Tim told Love Meow. 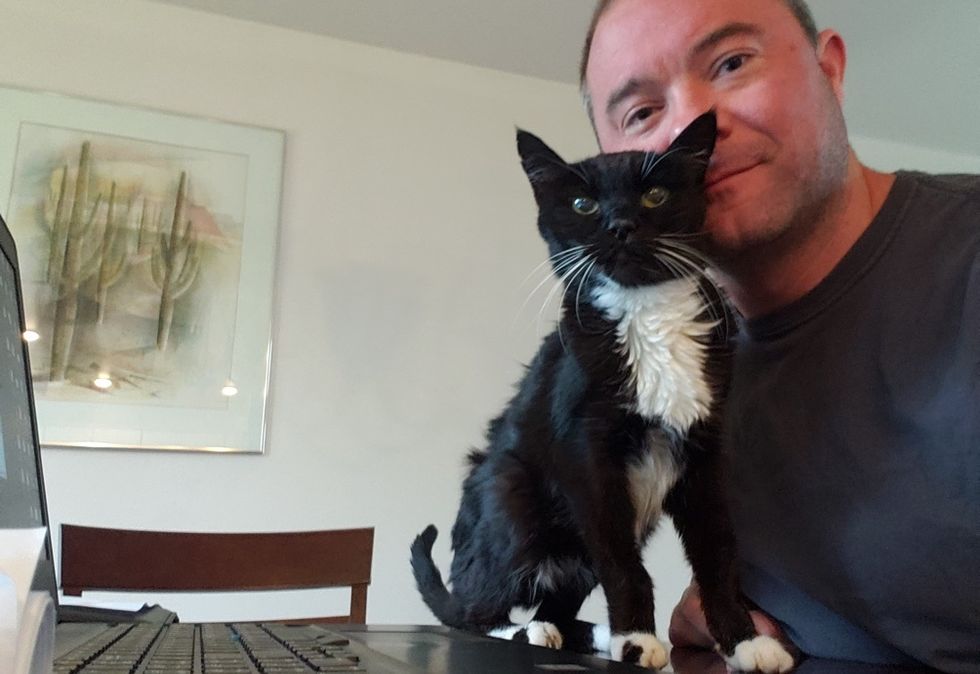 Related story: Cat Waves at Visitors at Shelter and Hopes Someone Can Take Him Home