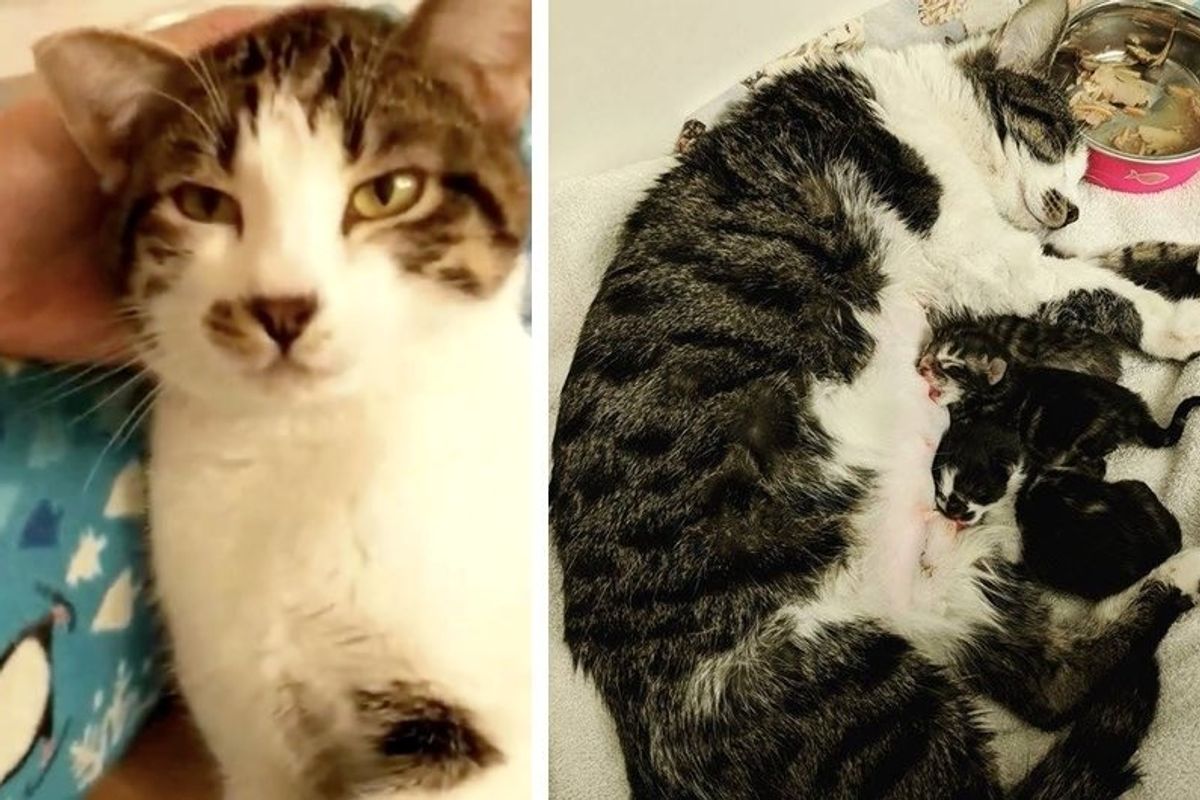 Cat Saved from Shelter, Surprises Rescuer With Newborn Kittens the Next Day in Their Bathroom.

A young woman saved a pregnant cat from a shelter. The next day, she was surprised when she heard tiny meows coming from her bathroom. 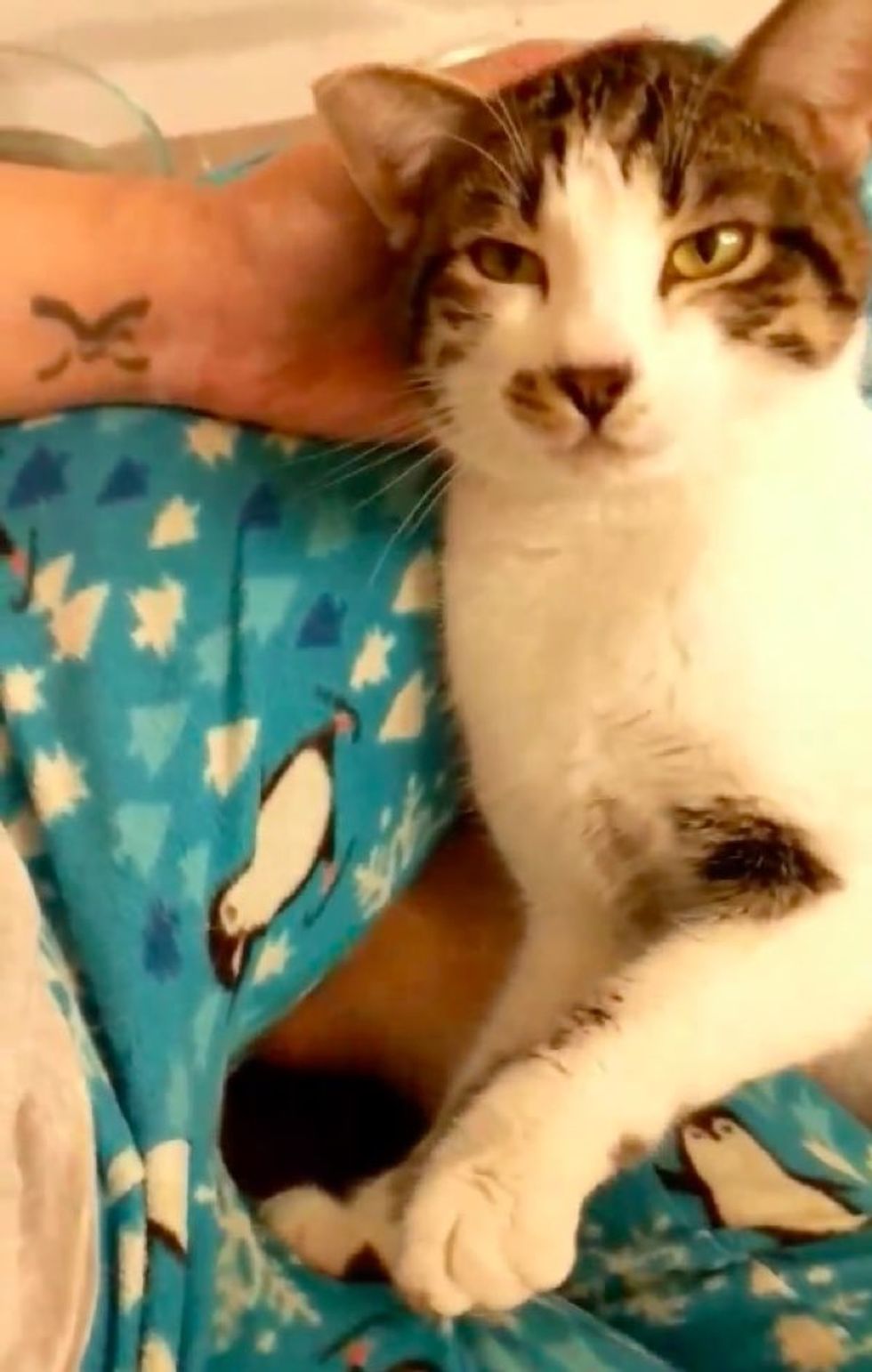 Jacqueline DeAmor, co-founder of Friends for Life Rescue Network in Los Angeles, came across a Facebook post about a very stressed pregnant cat at a shelter. Knowing that newborn kittens would be at risk at the shelter, she arranged transport to rescue the expectant cat.

"She was examined and found to be in overall good health except an upper respiratory infection. I was told she could give birth any day within the next two weeks," Jacqueline told Love Meow.

Fennel was temporarily placed in Jacqueline's bathroom while she was working on getting the kitten nursery ready. The sweet tabby was so happy to be out of the facility that she kept rubbing against Jacqueline's legs for attention and cuddles. 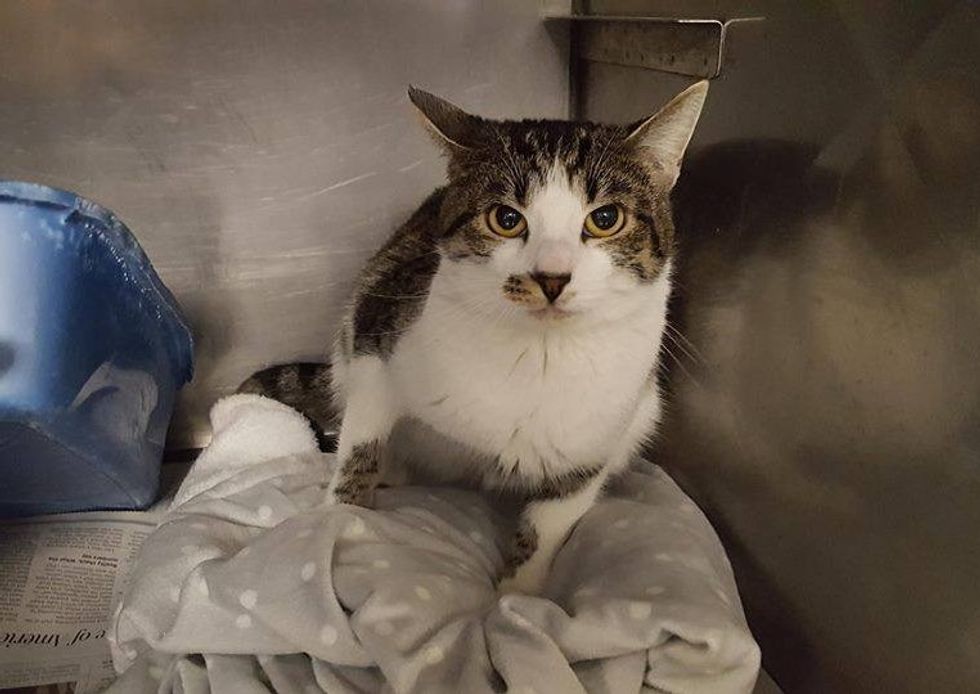 At the shelterFriends for Life Rescue Network

"She was so happy to have been saved. She ate a ton, was super affectionate, and would lay her head down on my lap while kneading," Jacqueline told Love Meow.

The next day, Jacqueline placed a birthing box in the bathroom "just in case" as the nursery room would be ready the following day. She did not expect to see kittens that soon, so went about running errands after feeding Fennel that evening. 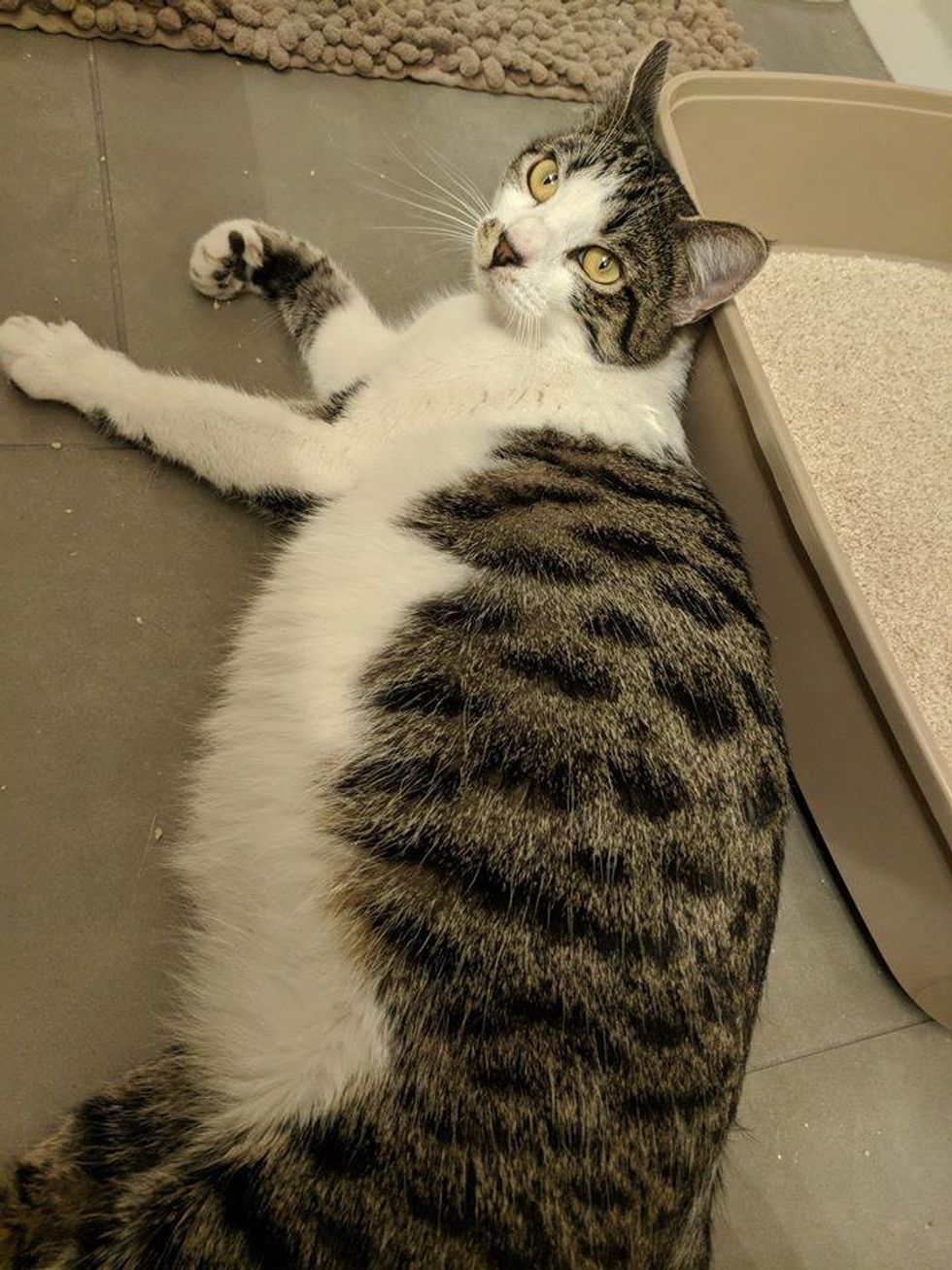 When she came back, she heard a tiny squeak that sounded like a kitten. "I kept thinking I should go check but then doubted myself because I had just been in there to feed her and she was fine."

An hour later, she heard another tiny meow. Jacqueline jumped out of her bed and went to the bathroom. 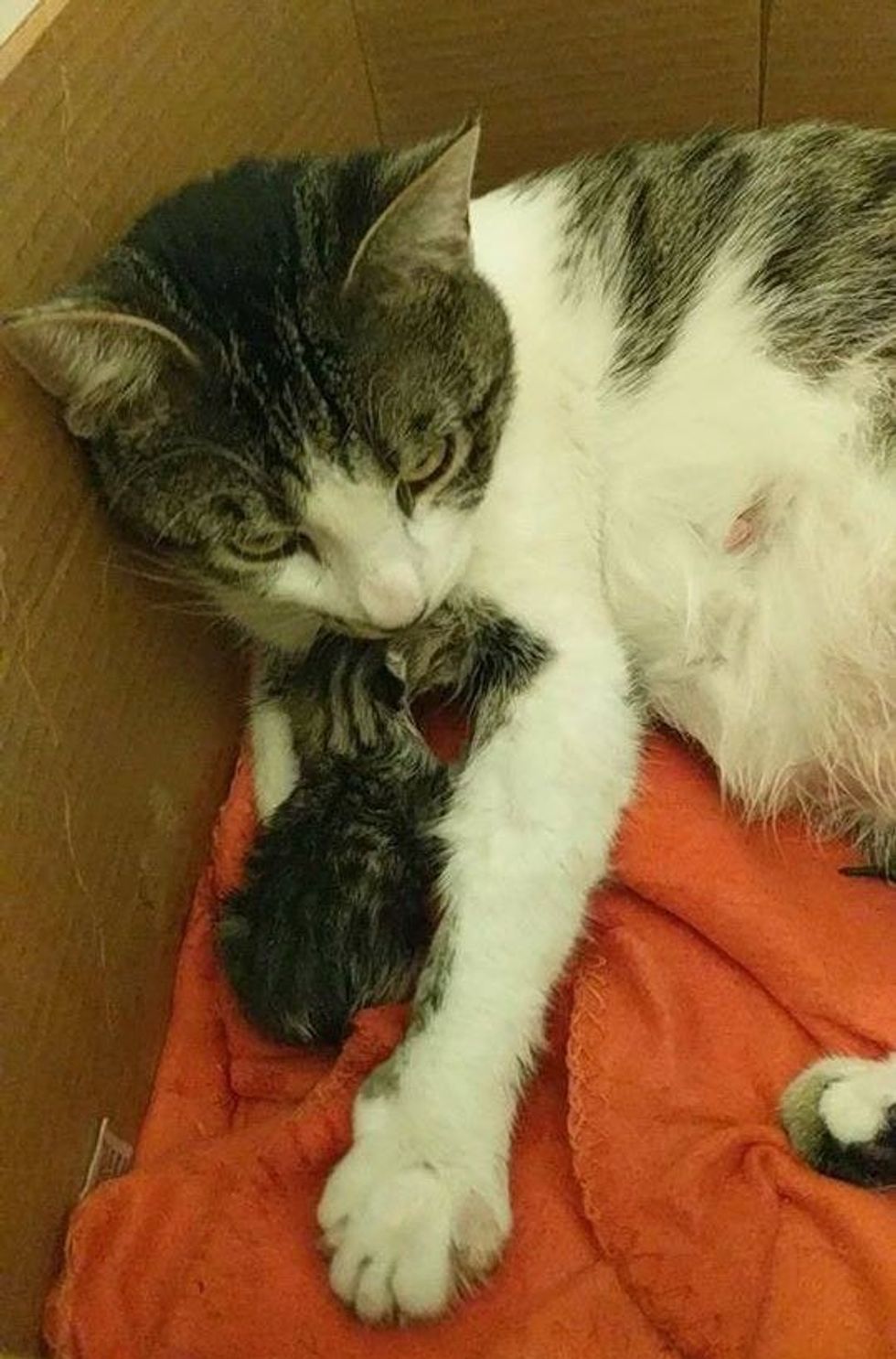 "It was around 11:30PM. I walked in and she already had given birth to three kittens in the kitten box," Jacqueline told Love Meow.

Two of them survived and had already begun nursing. 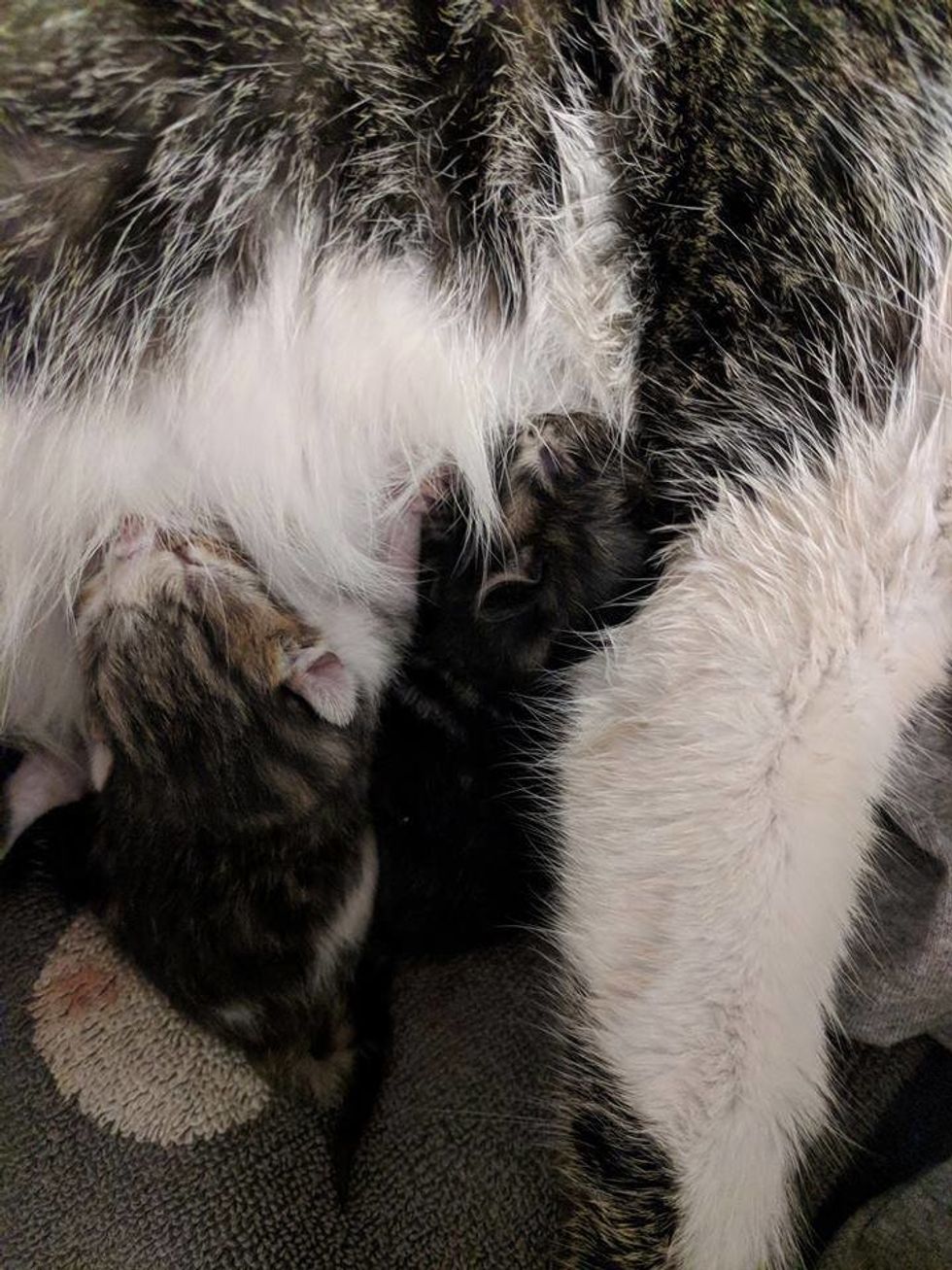 "I literally said to her 'Oh okay so we are doing this right now'." She ran out to bring all the supplies into the bathroom.

"I just sat with her on the bathroom floor, helped clean up the babies and gave her lots of food and water to drink. She then gave birth to a 4th kitten but was too tired to clean her so I aided in getting her nice and clean." 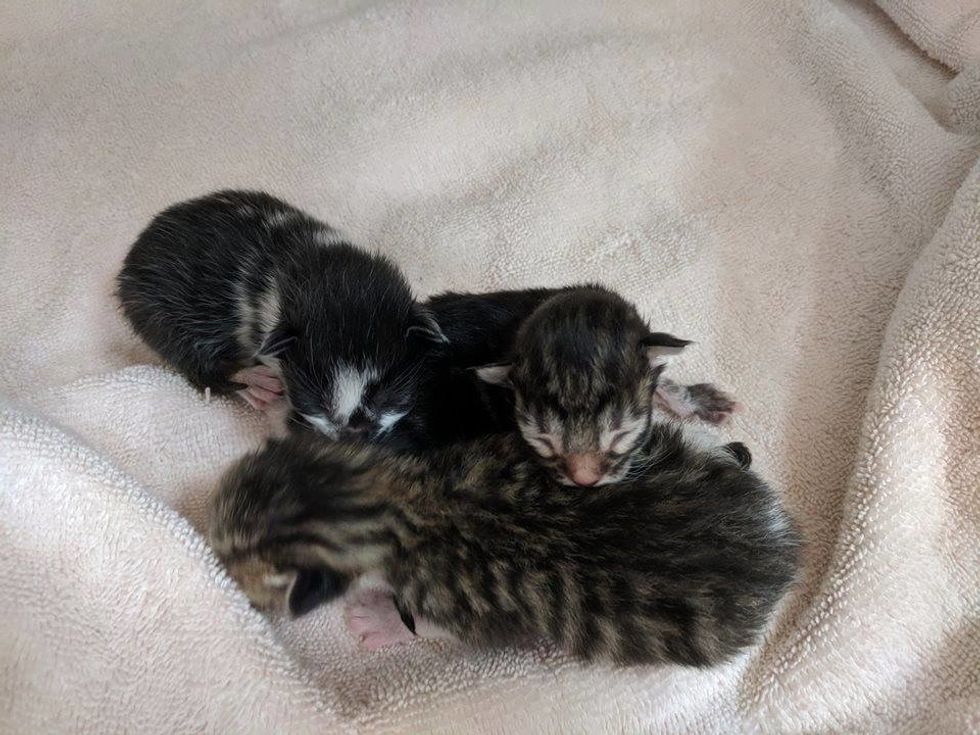 She transferred the feline family of four from the box to the bathtub covered with towels, blankets, and a heating pad, and she stayed with them in the tub until 4:30AM.

Hours later, Jacqueline discovered one final kitten lodged in her belly that needed to be taken out through a c-section. Fennel made it through the long ordeal with Jacqueline by her side. Three out of her five kittens survived and were eating like champs. 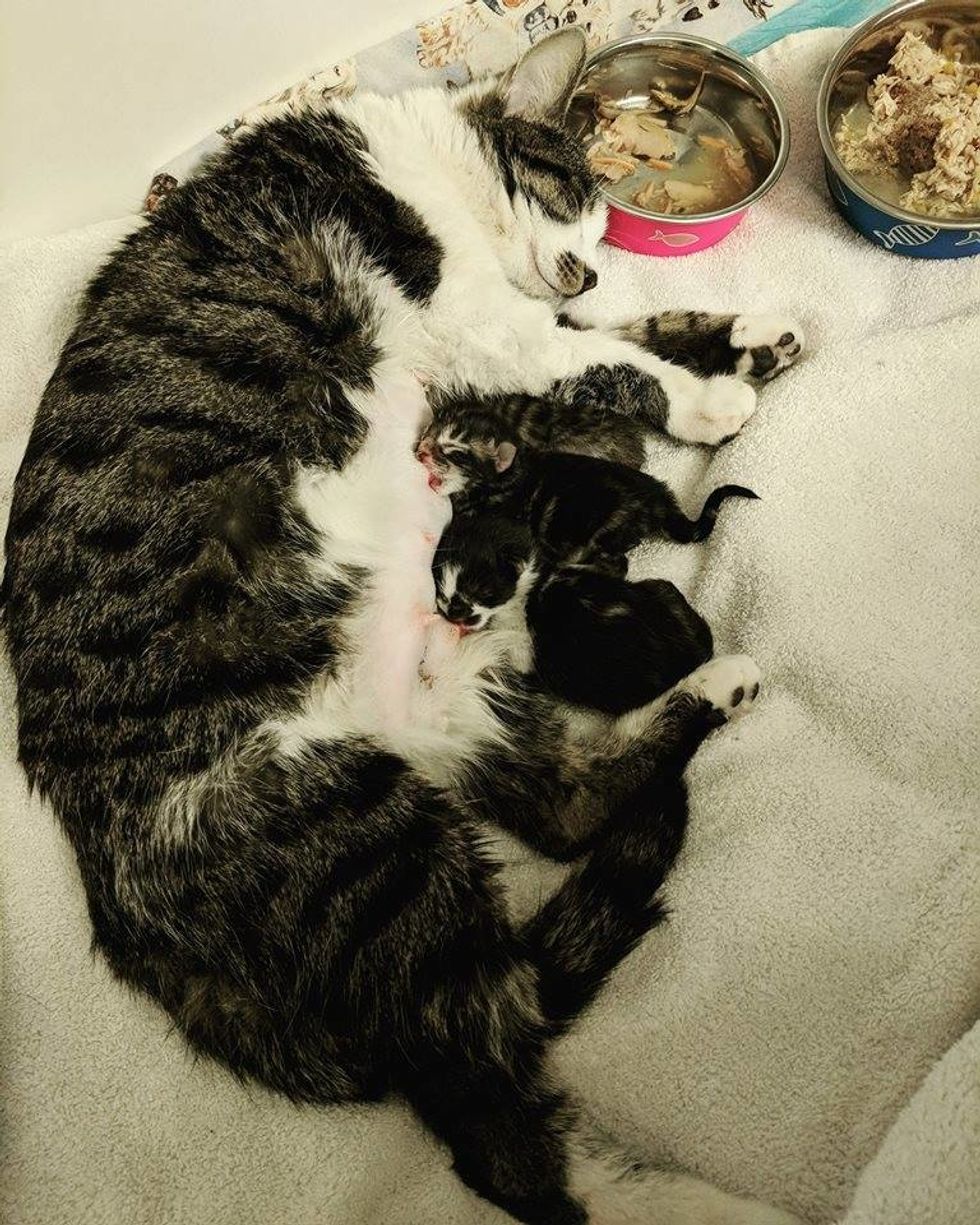 "The first two days, I aided in bottle feeding the kittens to give her a break. We also syringe fed her lots of nutrients including calcium to bring back her strength," Jacqueline told Love Meow. 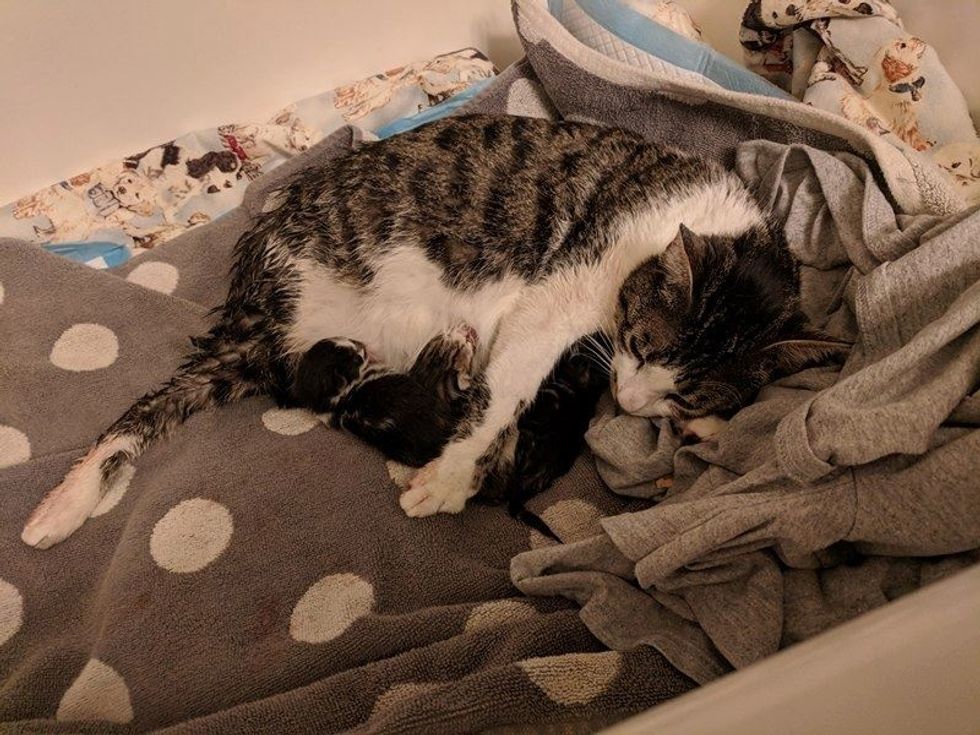 As soon as Fennel felt better, she jumped right back to nursing and caring for her kittens.

"She's now full-time tending to the kittens and healing really well. She has two boys and one girl - Thyme, Basil, and Alfalfa." 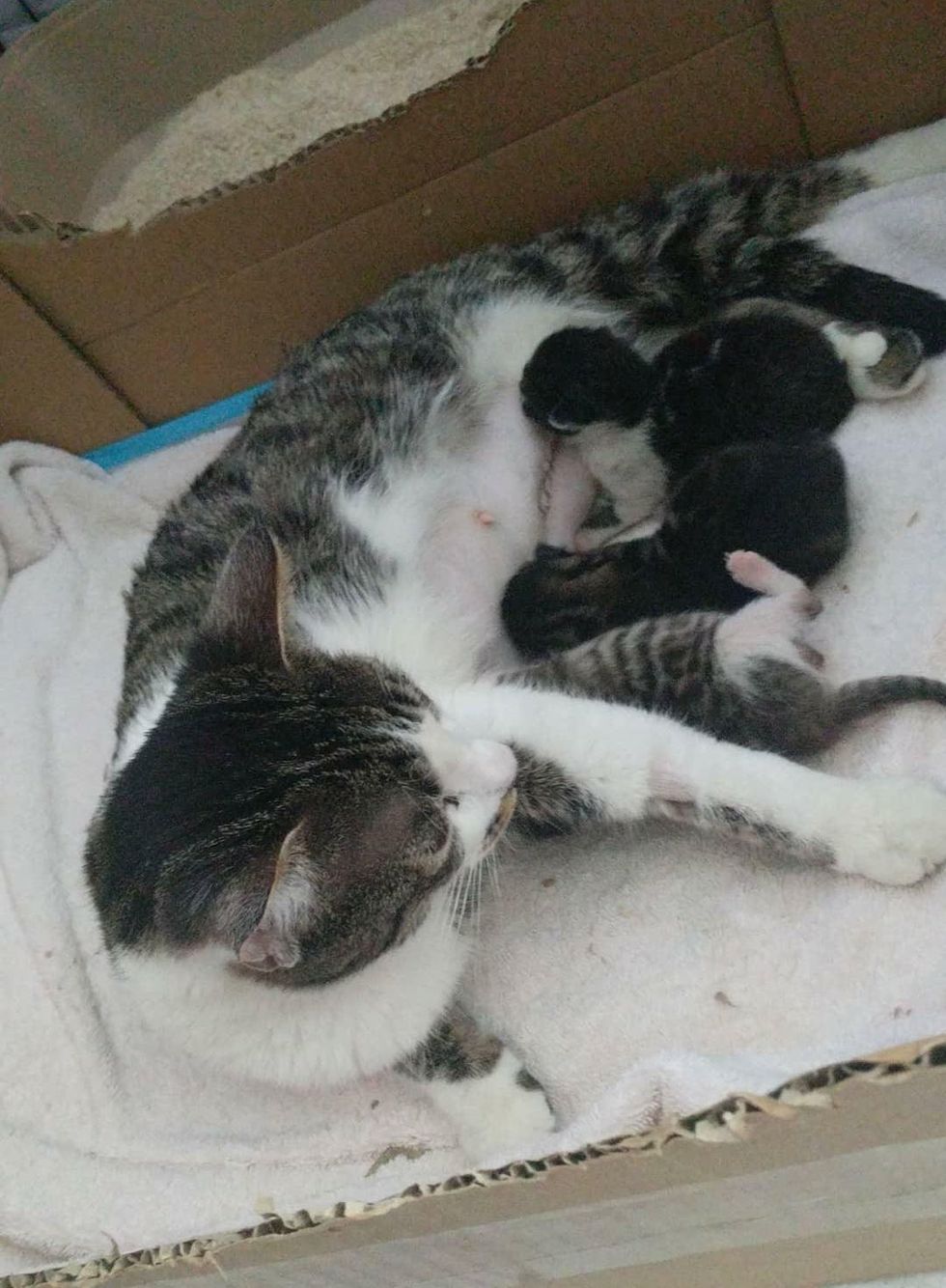 Mama and her three babies are thriving in foster care.

Fennel somehow knew when she found someone she trusts!

Related story: Stray Cat Mama Keeps Her Babies Safe and Fed Even When She Has Nothing to Eat

"This mama cat in need was found at the perfect time! This is why spaying and neutering is so important for all cats - indoor, outdoor, stray and feral. It helps save lives," Jessica of Cole and Marmalade told Love Meow.