Cat Surprises His Humans When He Becomes Dad to Every Orphaned Kitten They Bring Home..

This cat with a big heart knows what it's like to get a second chance at life, and he's returning the love by giving others in need their second chance. 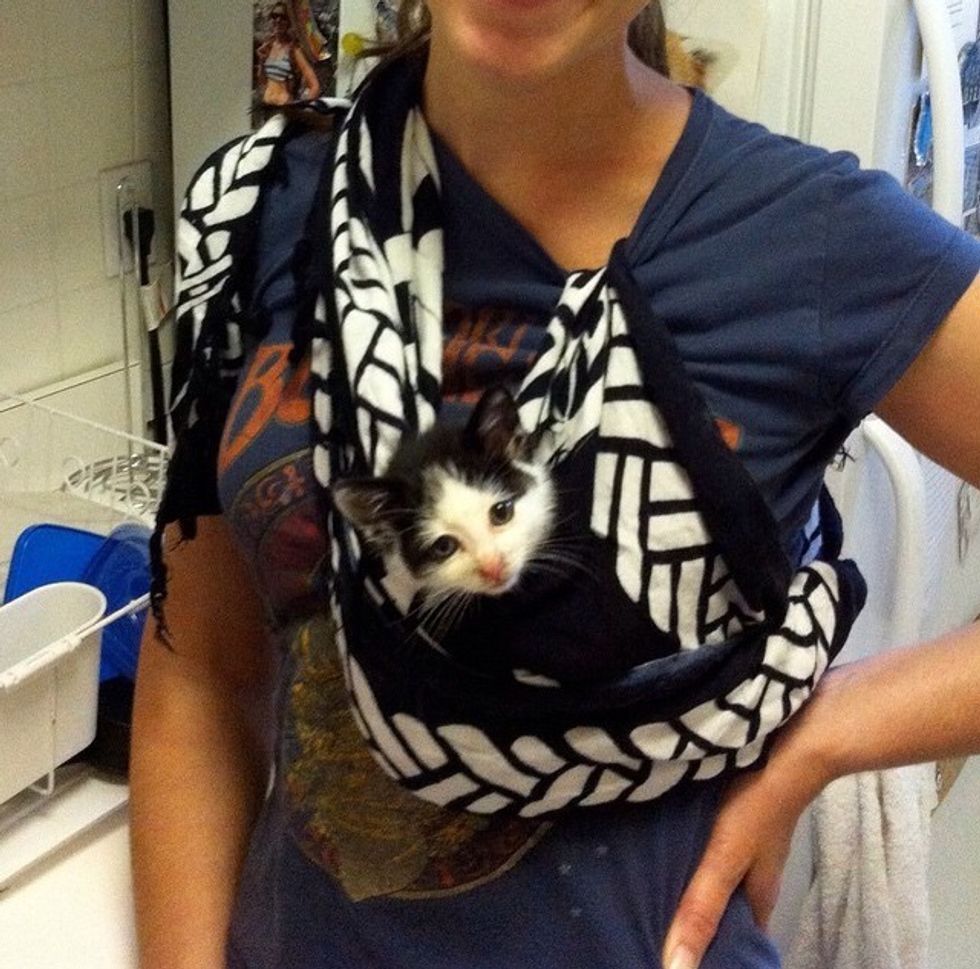 Pokey was found motherless alongside a deceased sibling back in summer of 2012. The tiny three week old kitten weighed less than a pound.

Jen (@pokeypotpie) went to the Animal Rescue League of Boston to pick up her new foster--Pokey who was dirty, hungry and very loud. He kept meowing nonstop until Jen cuddled him in her loving arms. "He cried and cried if I left him alone, so I started swaddling him and carrying him around the house," Jen told Love Meow.

The tiny kitten who never wanted to be alone any more, quickly crept his way into their hearts. "The longer we fostered him, the more we realized we could never let him go. And we didn't! He was our second 'foster failure'- Dora was our first."

As they brought home new fosters, they discovered that Pokey would try to cuddle and nurture all the orphaned babies and stay by their side watching over them every step of the way. 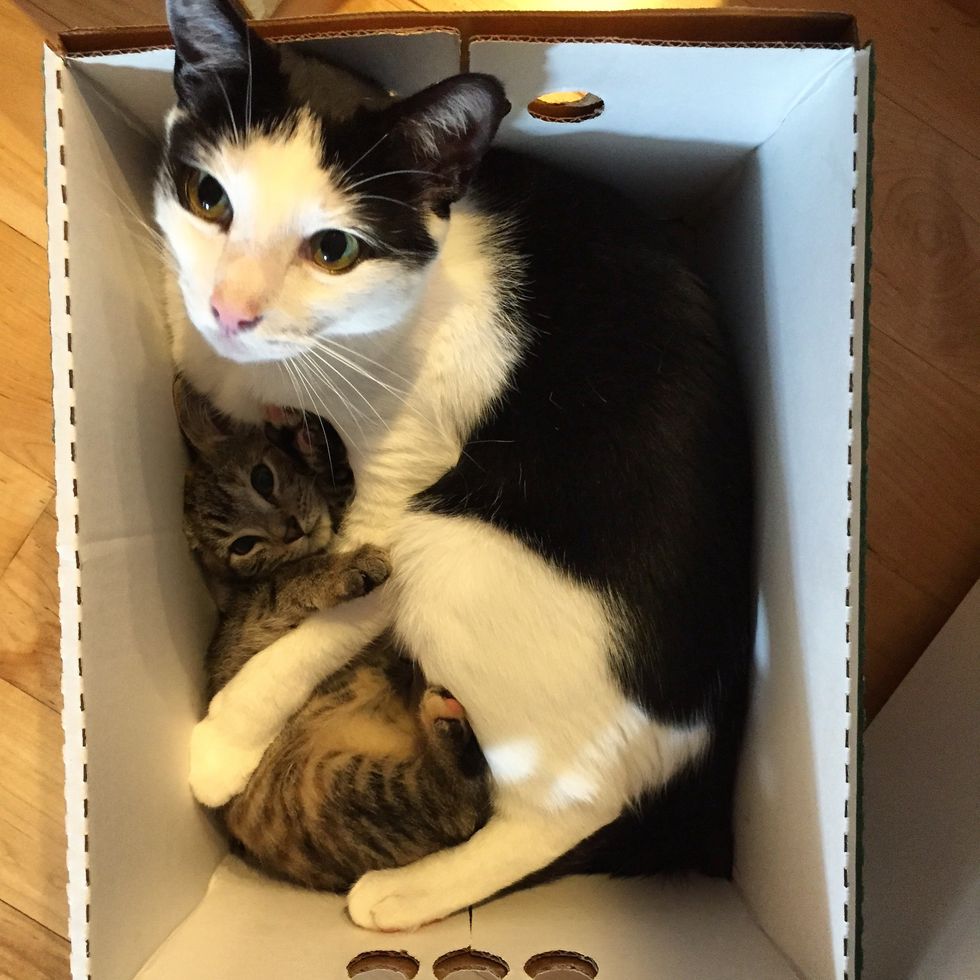 "We started fostering kittens again once he was about two years old. He took to the kittens immediately. He groomed them, played with them, and intervened when they got too rough with each other," Jen told Love Meow.

Pokey was very gentle with Sprout, a tiny orphan, who still hadn't figured out how to groom herself. He followed her around the room like a very attentive babysitter.

The kittens love having their cat dad Pokey around.

"They climbed all over him, snuggled up with him, and chased him around the house." 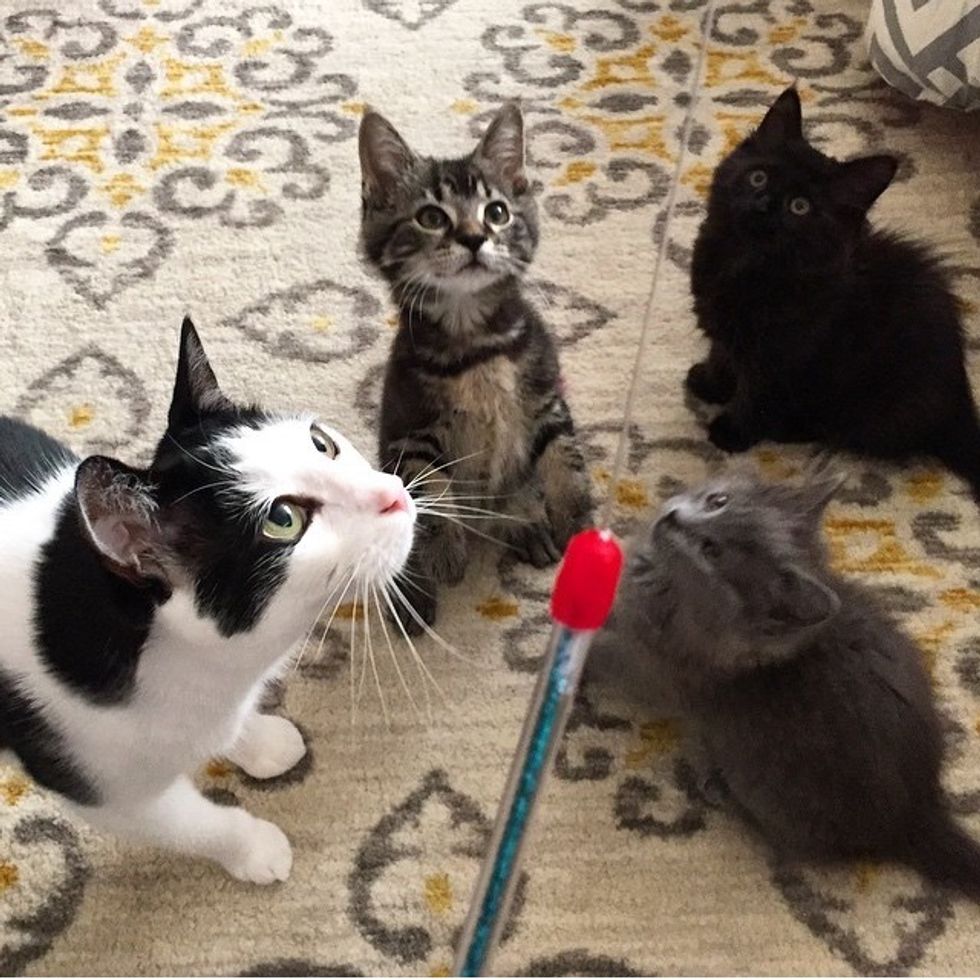 While Pokey does great with litters, he's even more amazing with single kittens. He cares for them and keeps them company at all times to make sure they feel loved.

"It's almost like he knows they need more love and attention. And the younger and weaker the kitten- the more his instincts kick in," Jen told Love Meow. 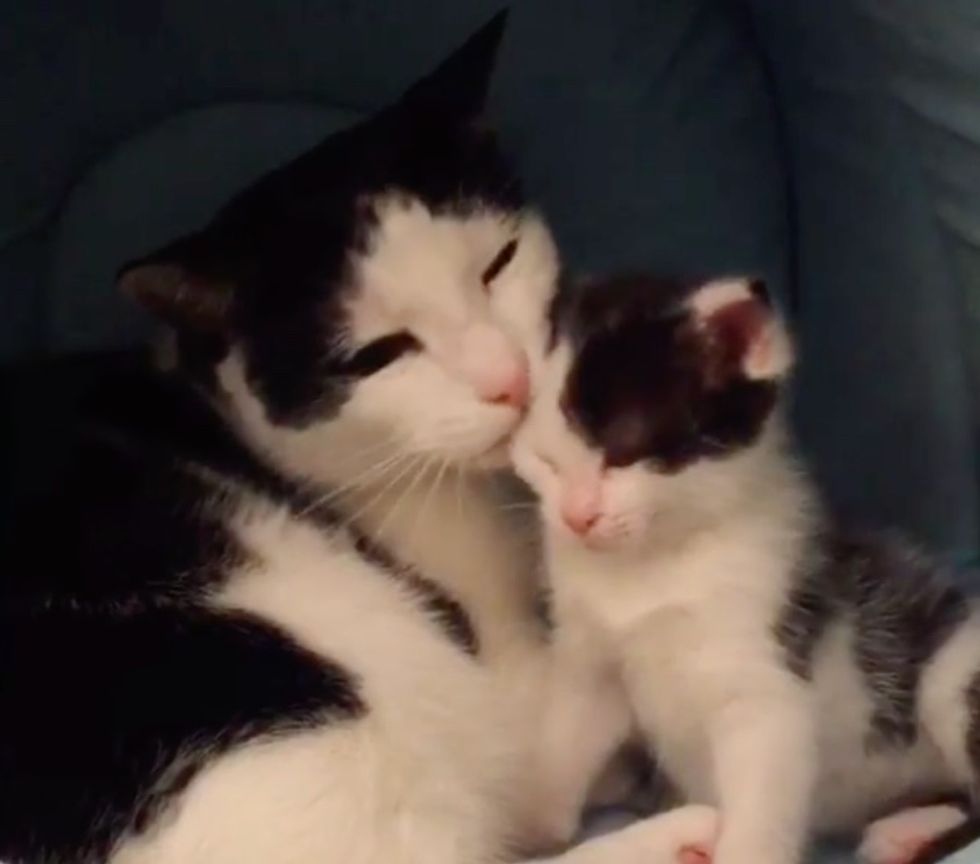 "He's a fantastic 'nanny-cat' and has helped nurture more than 20 kittens (and has been a great foster-brother to lots of adult foster cats)."

"All of our fosters now come from Lost Dog and Cat Rescue Foundation in Virginia. When Pokey knows there are kittens in the foster room, he stands outside the room, whines, and paws at the door." 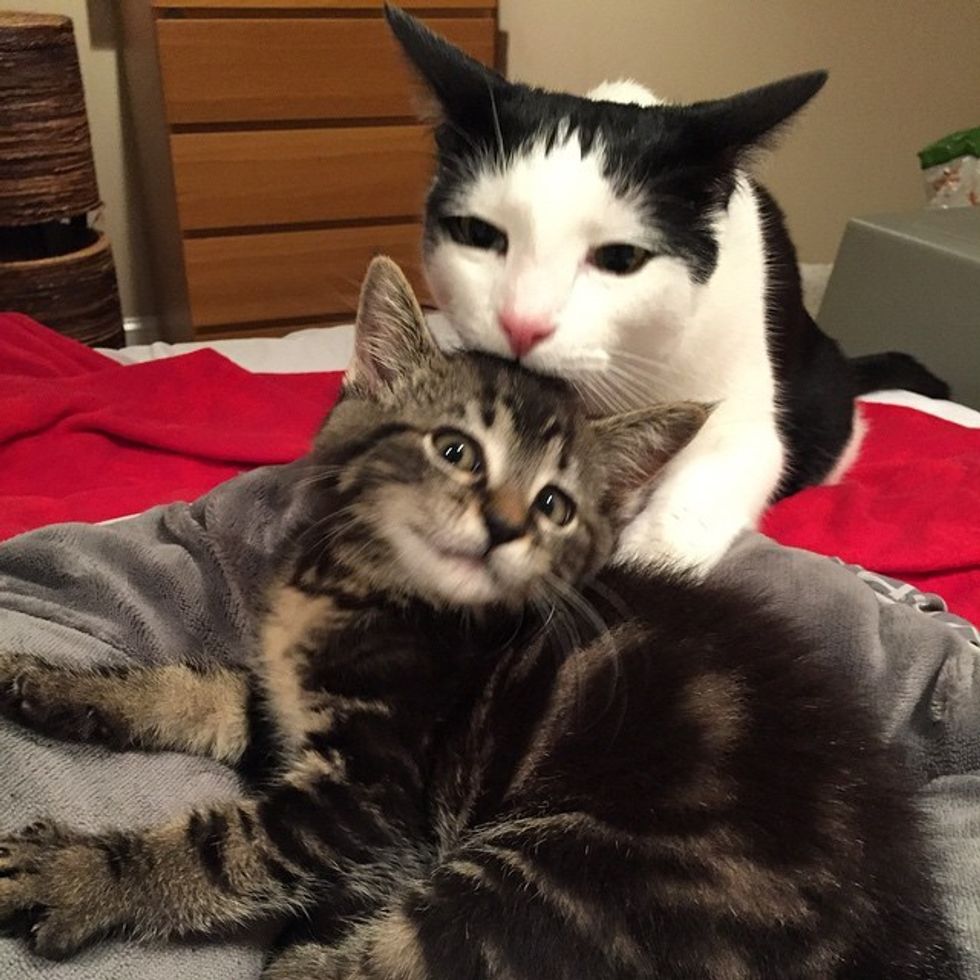 They keep the kittens in the foster room for the first 7-10 days to make sure they are medically clear, but Pokey is so anxious to meet and care for them that he waits by the door and tries to get in.

"He has figured out how to open all the doors in the house so we have had to get creative in order to prevent him from jailbreaking the kittens!" 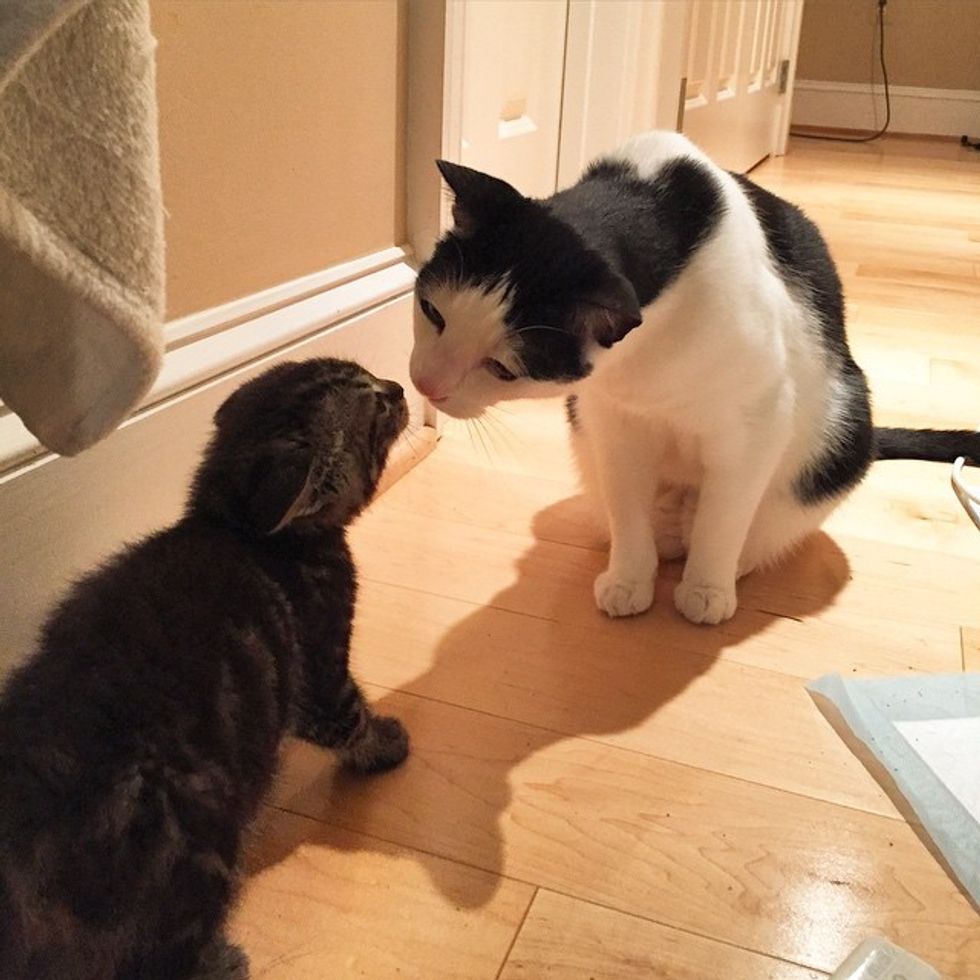 "When he sees new kittens for the first time, his gets his 'Oooh, Kittens!' face- his eyes get big, his ears perk up, and he just oozes excitement!"

"Pokey has more purrsonality than any cat I've ever met. He's intelligent, mischievous, quirky, and cute. I could not love him more," Jen told Love Meow.

Nothing makes Pokey happier than loving on his fosters. He's doing everything he can to make sure these orphaned kitties will never feel alone again. 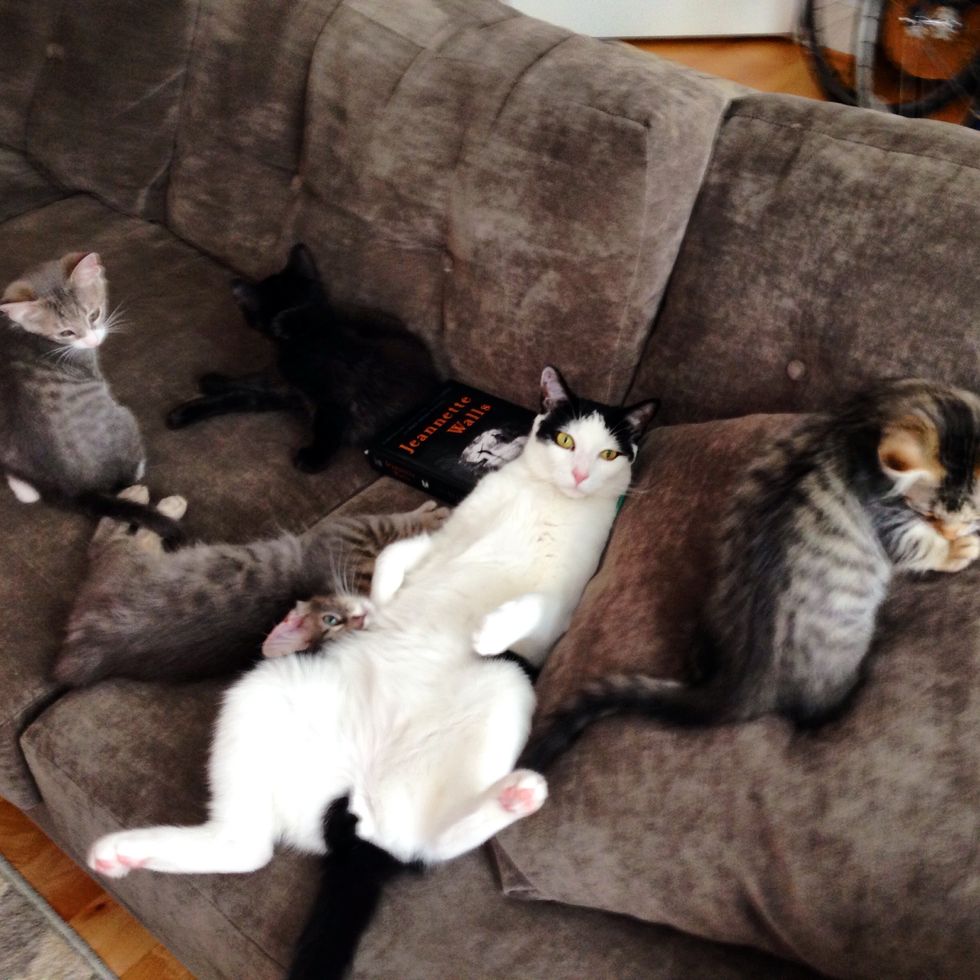 Pokey doesn't want to go anywhere but to be with his foster babies.