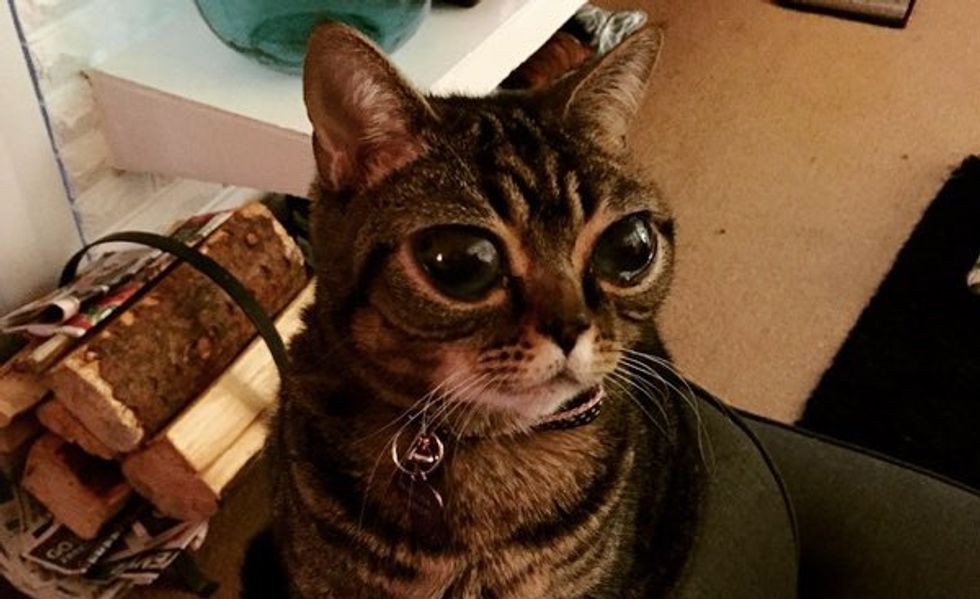 Cat with a Pair of Mysteriously Big Eyes

This beautiful cat with very very big eyes has a story that is quite mysterious on its own. Her name is Matilda, a 2-year-old tabby whose eyes began to enlarge after her first birthday. But this young lady lets nothing slow her down. (Matilda's instagram)

Before Matilda's eyes began to change.

"When she found her forever home she was only 12 weeks old and the cutest, teeniest thing that anyone had ever seen! She came home from the vet that day with a cone on her head and showed no fear when she met Dog who was about 10 times her size," Matilda’s human wrote on her site.

"Shortly after her first birthday, her right pupil became enlarged and stayed that way for several minutes." They rushed her to the vet, but when they arrived at the clinic, the eye had gone back to normal.

Matilda checking out her human's fashion and taste.

This reoccured several times after and they were at a loss. Matilda’s humans began to seek help from different veterinarians. "After she saw a specialist we learned that it is a spontaneous lens luxation, which means that the lens detached from the rest of the eye for no known reason," the family told People. "This is the mysterious part of the problem since she is an otherwise healthy cat.”

Watching cat TV. The squirrel channel is on that day!

When the other lens detached as well, Matilda’s eyes began getting bigger. The reason to her mysterious ocular condition is unknown. Fortunately, Matilda isn't in any pain according to the family and she is very much a normal cat, living a normal cat life just like other kitties. The humans are in regular contact with the veterinary eye specialist and keeping her physical up to date.

The family is looking for clues to the cause of this mysterious condition. If you have ever seen anything like this, let us know in the comments.

Nothing makes her happier than snuggling with her humans!

Watch video: Matilda inspecting her human's finger and giving it a bath

Watch video: Playing hide and seek with her human. Isn't she adorable?