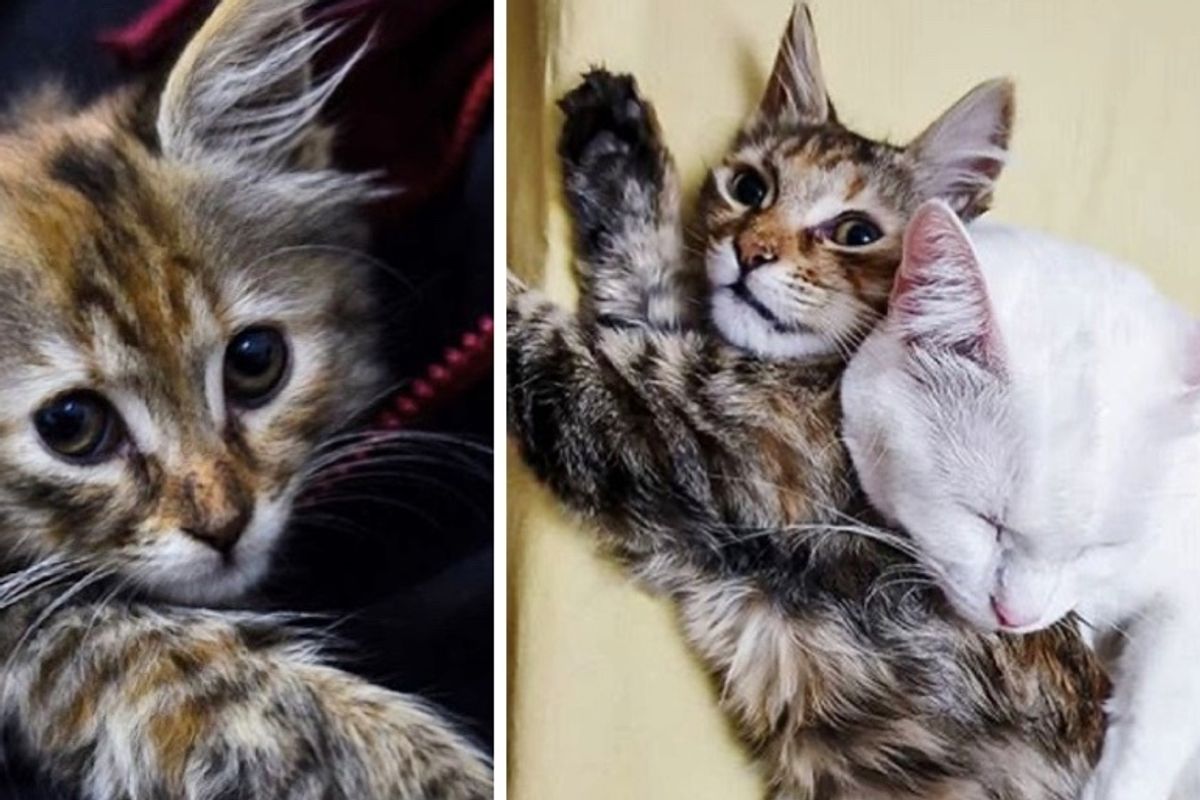 A couple tried to help a stray kitten find a good home, but their cat had a different plan. 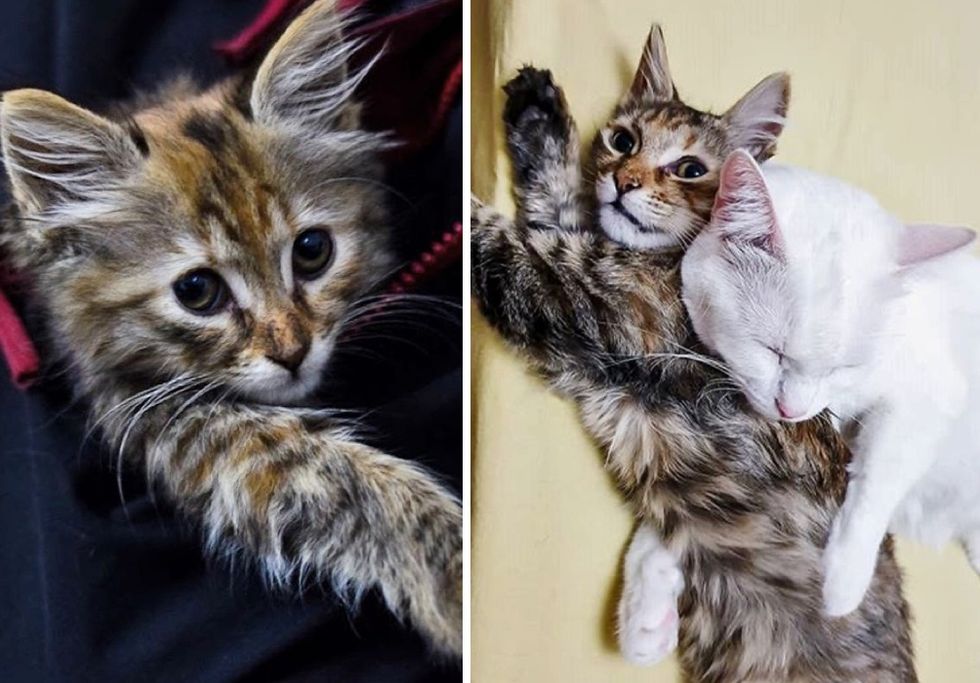 Sorin Popa and his girlfriend from Romania moved into their new home with their beloved furry duo, a cat named Abyzou and a dog named Dante. Soon after they settled in, they began to hear meowing coming from outside.

They went out and traced the sound all the way to a car parked nearby. A tiny kitten was hiding under the vehicle and was too afraid to come out. "She was very scared, and she would run if you would try to catch her," Sorin shared with Love Meow.

One of their neighbors managed to catch the kitten but returned her to the street the next day. "They took her back because she wasn't accepted by their other cat."

"We decided to rescue the kitten and try to find her a loving family. After a long hour of hiding under the car, my girlfriend finally got her out to safety." 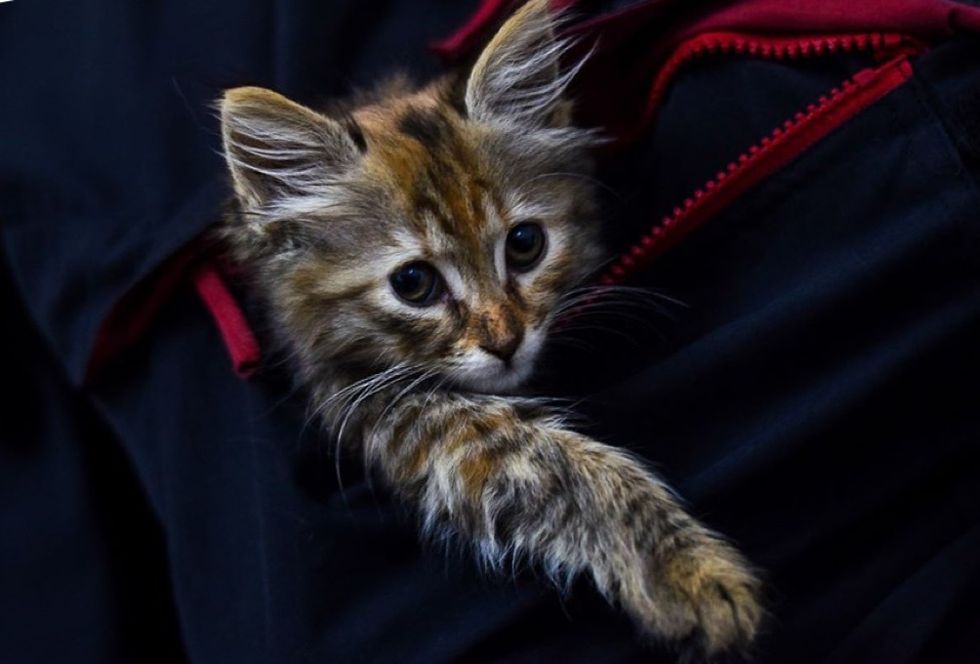 They wrapped the kitten in a jacket and brought her home. The little tabby was just skin and bones and shaking in fear. After quickly scarfing down some food, she darted behind the fridge to hide.

"She stayed there for three days and was scared of every sound and movement in the house," Sorin told Love Meow. "She would only go out at night to eat or drink water when no one was around." 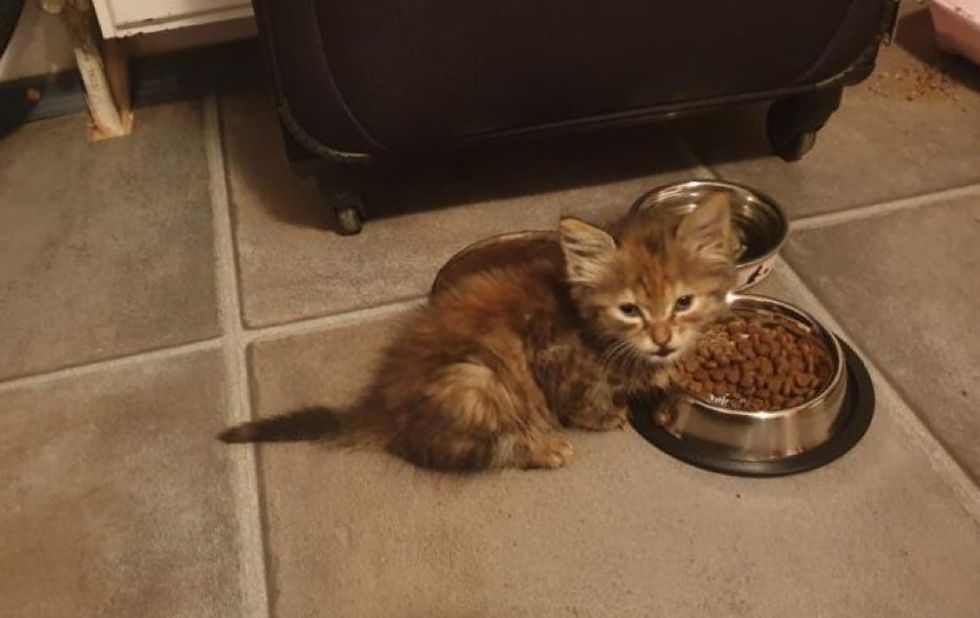 The couple managed to take the kitten to the vet and got her all cleaned up. With lots of patience, love and plenty of food, the tabby began to come around. Meanwhile, their resident cat Abyzou had been waiting by the door to meet the little newcomer.

Abyzou quickly took to the kitten who was a bit startled by her at first. Within a day, the couple found the two cuddled up together on their bed as if they had always been best friends. 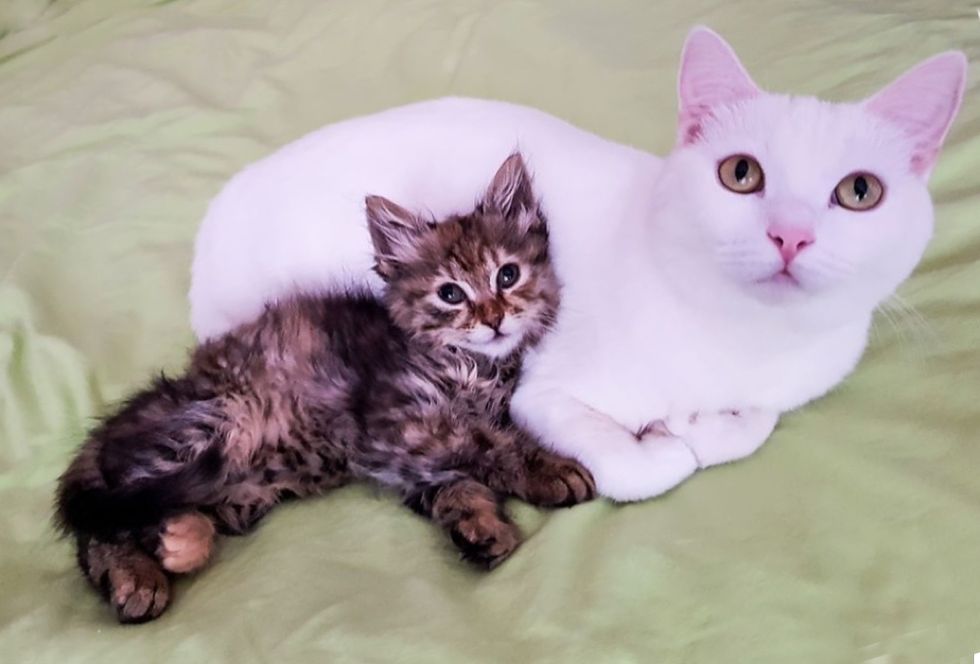 They initially planned to find the kitten a good home, but their cat Aby made the call and took the little one under her wing.

"From the beginning, Abyzou would let the kitten play with her toys and even eat from her plate. We decided to keep her and name her Shax," Sorin shared with Love Meow.

"They are best friends, and they sleep all day and play all night." 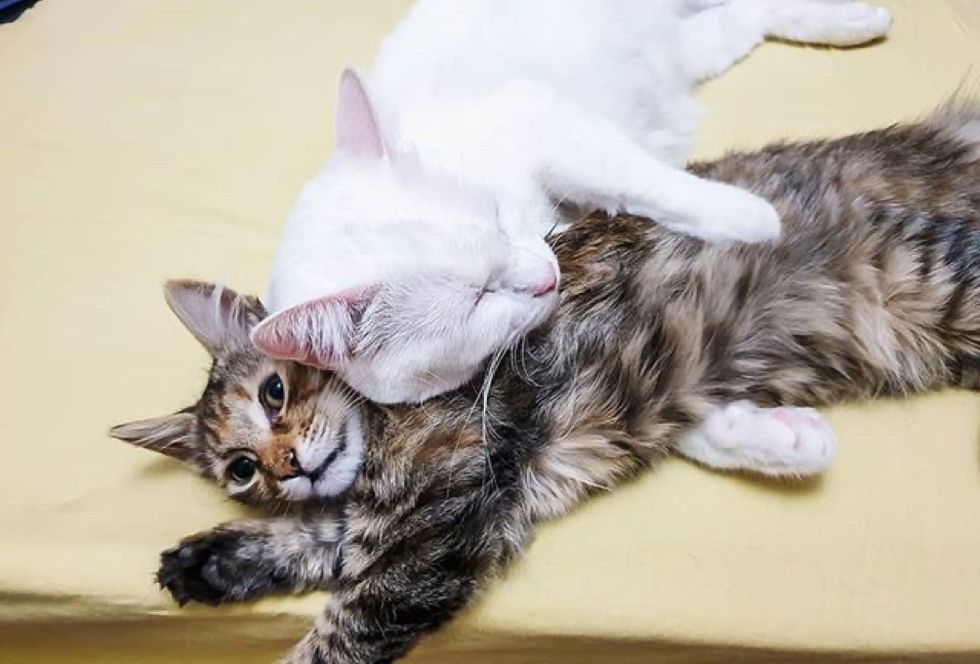 Aby showed the kitten the ropes and taught her to be brave and not to be afraid of Dante the dog. Shax grew to enjoy his company and even started playing with his tail.

"All three of them now sleep together in our bed, and life has been amazing with these fur kids." 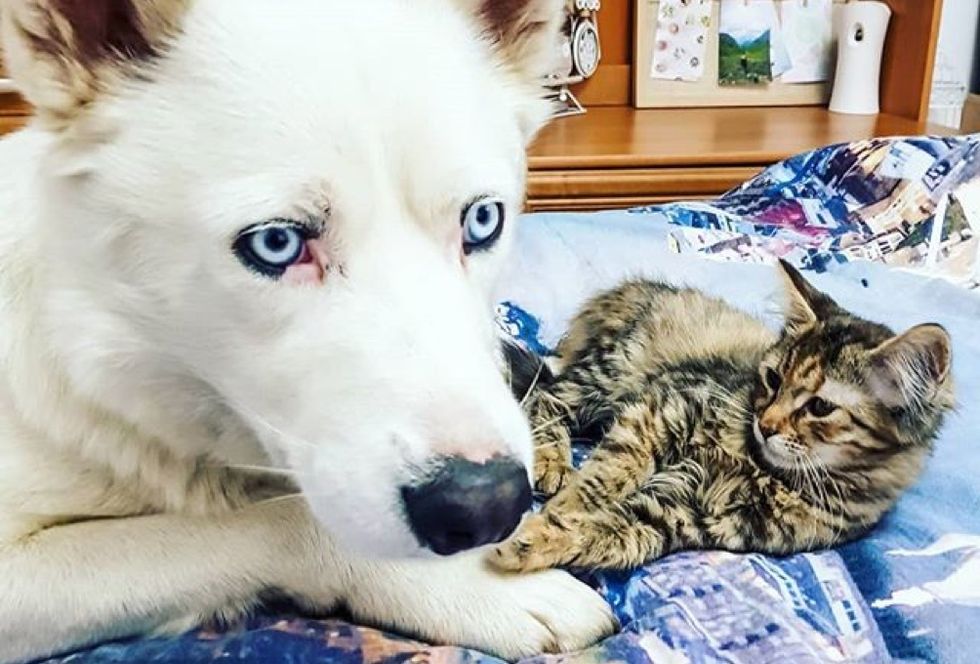 Aby has taken the role of big sister, showing her little protege how to eat, play and sleep like a cat.

Just like the kitten, Aby was found outside near a construction site when she was a kitten. Dante took her under his wing, and they grew up together. Now with the new kitten, she's showing her the same love she received when she was rescued. 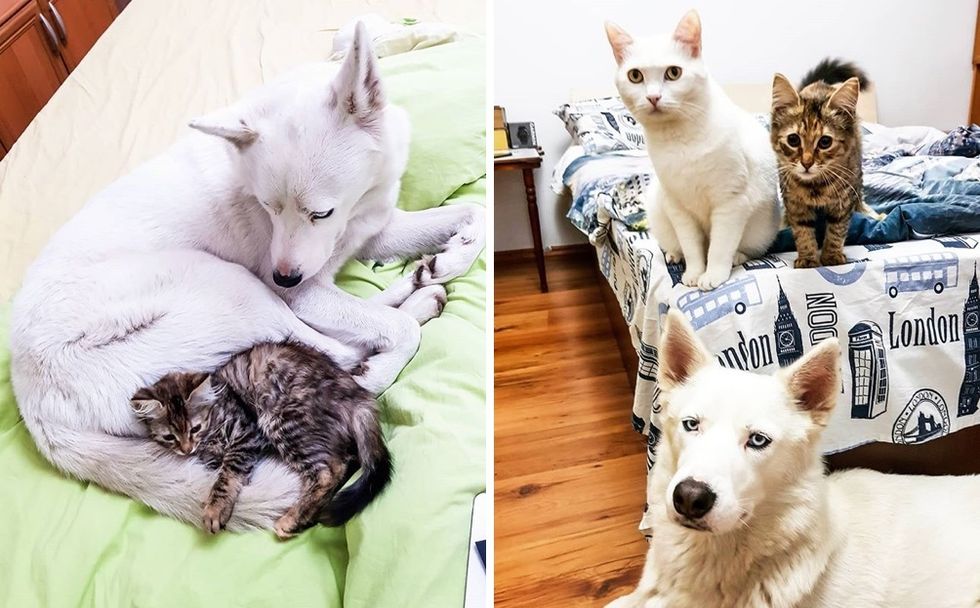 Shax has discovered her love for fetch. Whenever she is retrieving toys to her human, Aby is always near, watching the action.

When they are not scampering around the house or wrestling with one another, they are curled up next to each other, ready to nap. 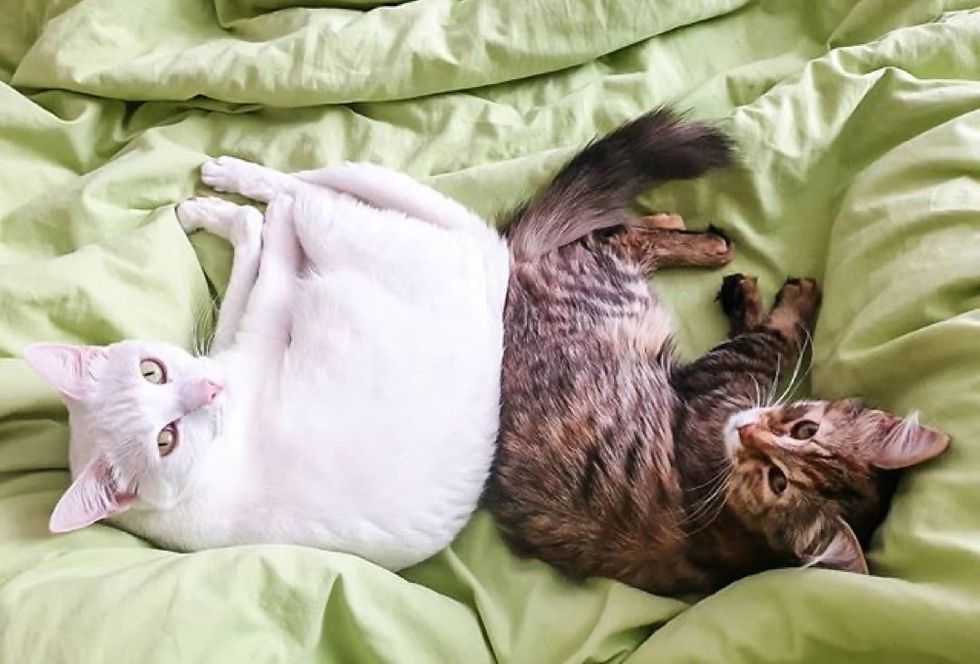 The trio gets along beautifully. They demand breakfast together early in the morning and enjoy watching the day go by.

Dante the canine adores his feline sisters and guards them wherever they go. 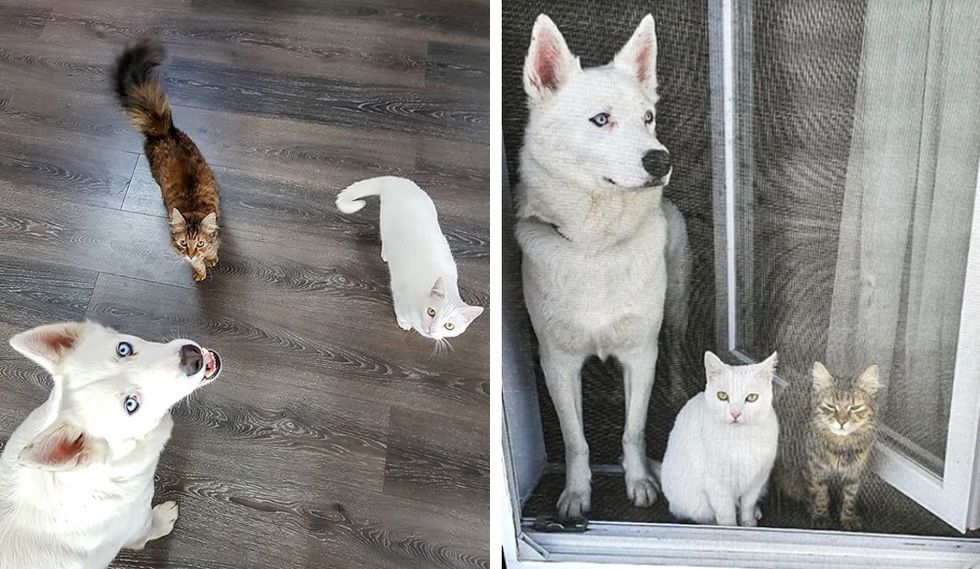 The little former stray has blossomed into a gorgeous, confident cat. She will never have a day of worry about food and shelter, and has a big family to lean on. 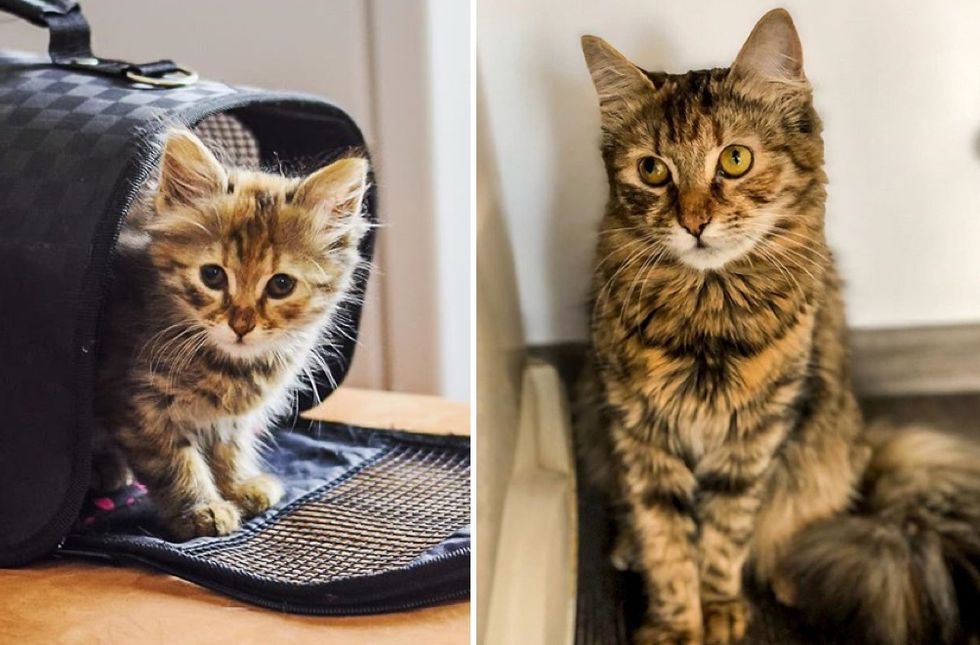 Related story: Kitten with Extra Toes Took to Family Cat and Insisted on Being Her Friend