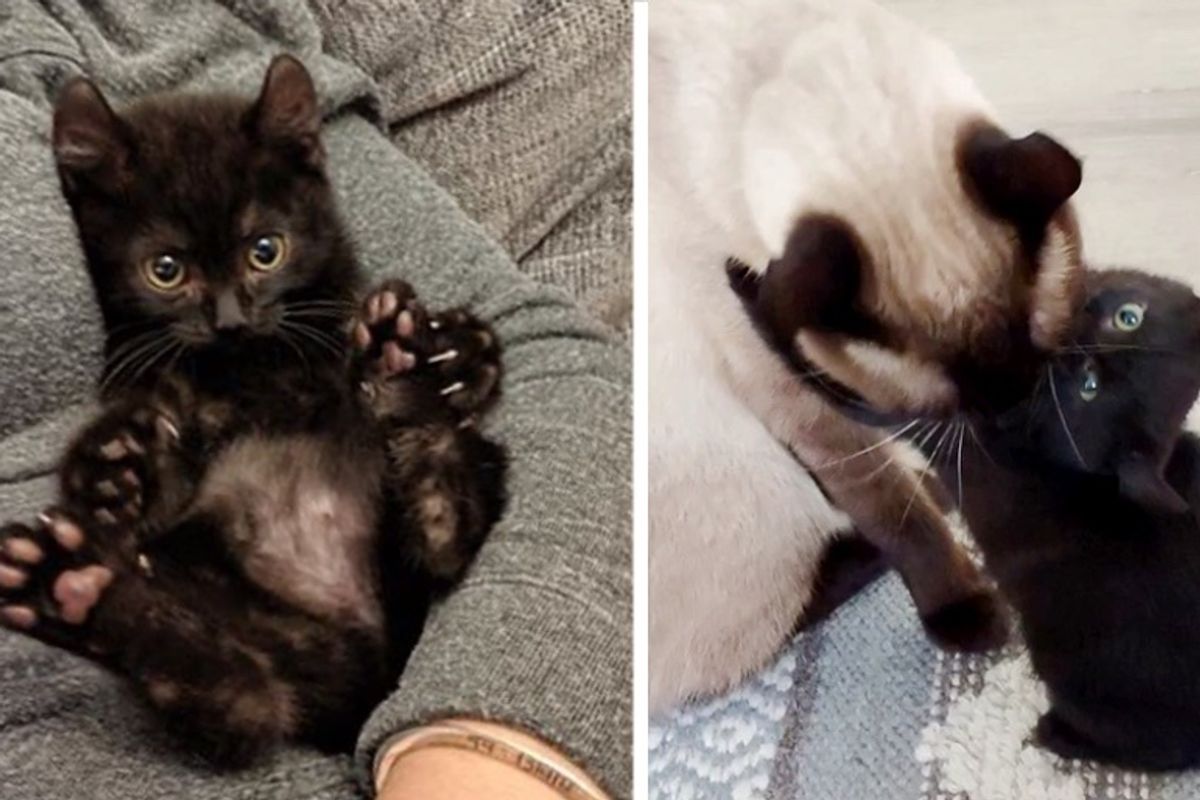 A family planned to foster a kitten for a few weeks, but the kitty had a different idea.

A stray kitten with extra toes and curly ears was brought to a shelter in Los Angeles, last year. She was very scared and overwhelmed by the noise in the shelter and needed a foster home.

Jacqueline DeAmor, founder of Friends for Life Rescue Network, offered to help. "When I first got the kitten, she was hissy and spitting. But it was all bark and no bite," Jacqueline shared with Love Meow.

That tough exterior quickly melted away when the kitten arrived at her foster home. Erica Goren and Nic Pappas planned to care for the little one until the right home came along, or so they thought.

The kitten whom they named Domino, came out of her shell when she realized she was in safe hands. She warmed up to her foster parents and nuzzled her way into their arms.

Charlotte, the resident cat, was intrigued but hesitant to meet the newcomer. She kept her distance for a while, but little Domino was excited and couldn't wait to run up to her new friend to greet her.

"She was the first to fall in love with Charlotte way more than her foster humans. She immediately wanted to be her friend," Erica shared with Love Meow.

"Charlotte was afraid of the little fluff but she was allowing her closer proximity."

Charlotte sniffed around the little kitten to get to know her better, but Domino immediately rubbed up to her with her overzealous affection.

The little panther kitty took to the Siamese cat right away and began following her everywhere around the house.

The moment she saw Charlotte, all she wanted to do more than eat was be near her. Domino would come running to give her head snuggles, and wouldn't take no for an answer.

"Her personality started to come out and she really wanted to be friends with Charlotte. Every chance she got, she tried to run to the Siamese while the big silly cat started running away."

Initially, Charlotte wasn't so sure how to handle this kitten who didn't understand the concept of privacy, but Domino set her mind on winning her over.

After days of persistence, the vivacious little kitten really grew on the resident cat. One day this happened - she got her first bath from her new best friend.

The little spitfire completely melted when Charlotte groomed her and loved on her. The kitten was so happy to know that she would never be alone again.

When it was time to find Domino her forever home, Erica and Nic knew she had already found it.

They fell in love with the little panther kitty and couldn't separate her from her best buddy Charlotte.

"Domino has become a 'foster fail' and is now a permanent addition to our family. We love her and are forever thankful," Erica said.

Domino just turned one year old a few weeks ago. She's caught up in size with Charlotte, and the two are closer than ever.

They do everything together and never nap alone.

The little kitten with extra toes came to her foster home for a chance at a better life. Now she's living the dream with her best friend and humans who love her to bits.