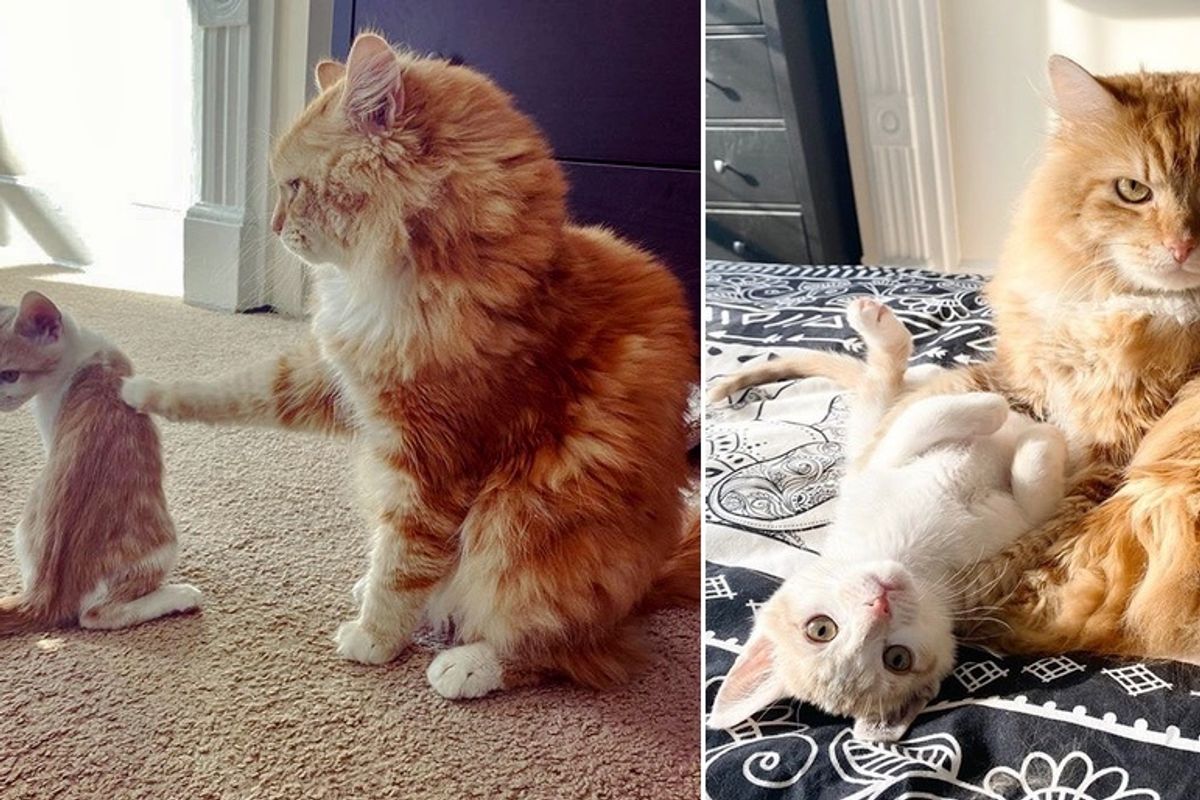 A fluffy cat insisted on being friends with a shy kitten and wouldn't take no for an answer.

Earlier this year, a 5-week-old kitten named Bernard came to a foster home with his siblings after they were found on Staten Island without a mom. Bernard was underweight and needed the most help.

Their foster mom, Jess Thoren, worked tirelessly around the clock to nurse him back to health. He was still the smallest of the litter but was finally catching up to his siblings.

"Tiny Bernard always seemed to get the whole bed to himself while everyone else slept on the floor," Jess said.

Around that time, Jennifer Geoghan from New Jersey was looking to bring home a new addition, so her 3-year-old cat Henry could have a buddy.

"I recently moved into my own apartment (the week the stay-at-home order was set into place). I was originally going to wait to adopt till I was settled in. Then one day, I realized this was probably the best time to adopt a kitten," Jennifer told Love Meow.

She did some research and came across Jess' foster kittens. Little Bernard and his adorable, quirky personality immediately caught her attention, and she was completely smitten. After filling out the application and getting approved, the kitten, now renamed Oliver, moved into his new home.

"He was instantly a mush and snuggled with me on the bed. The moment Henry realized what was going on, he was so curious about Oliver."

Henry came running to the room where Ollie was at, and was very intrigued. He was eager for a meet-and-greet, but the same enthusiasm was not reciprocated.

Ollie was a little frightened by the fluffy cat who was about twice his size. Henry wanted to interact with his new friend, but the kitten resisted, retreated, and took refuge behind the comforter and pillows.

"Anytime Henry tried going near him, he got scared and would hide. Henry would not give up though, he really wanted to play," Jennifer shared.

The ginger cat was determined. He would stay outside the kitten's hiding place and patiently wait for him to come out. After almost two days, the kitten finally caved and decided to accept Henry as his new friend.

"I'm convinced that Ollie just gave up and surrendered. They were finally playing!"

Watch Ollie and Henry in this cute video:

Henry immediately took the little guy under his wing and showered him with cuddles and licks.

He showed the kitten the ropes and taught him everything he knew about feline mischief.

"They love to chase each other back and forth. They dart from one end of the apartment to the other for hours," Jennifer told Love Meow.

Henry who was always clingy to his mom, has shifted his attention to the new kitten and taken on the role of big brother.

"Henry was always needy and loved snuggles and attention constantly, but now that he has a brother, he barely pays attention to me," Jennifer said.

"I get a snuggle here and there but he's mainly playing with Oliver or sleeping after they play. I feel like Henry is the old wise brother just guiding Oliver through life."

The two best friends are like two peas in a pod. Henry makes sure he is always present when the kitten needs a hug.

"I catch them cuddling and cleaning each other, and my heart just melts."

Henry who likes to sit upright like a person, watching the day go by, now has a buddy to share his favorite pastime with.