A tri-pawed ginger kitten has found the perfect friend to help him thrive. 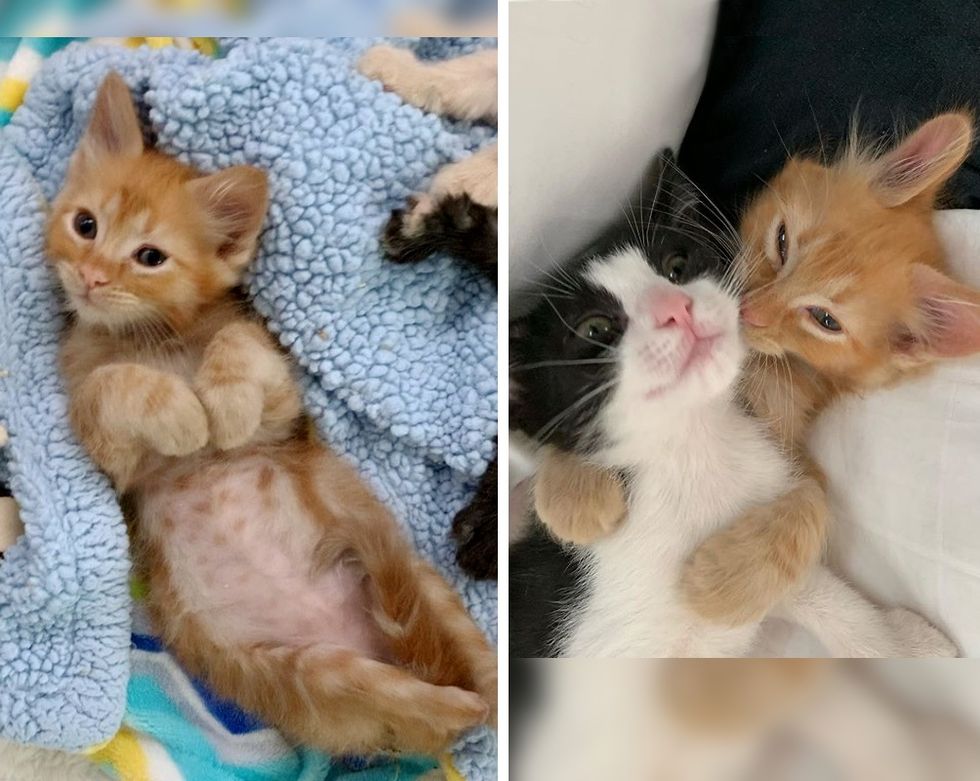 Rooibos (aka Roo) the ginger kitten came to Alley Cat Rescue in Los Angeles along with his siblings and mom. "He was born with both back legs wrapped around his body and badly deformed," Alley Cat Rescue shared with Love Meow.

Through physical therapy, massages, laser treatment and exercise, his left leg improved and straightened, but he eventually lost his right paw. Despite only having three feet, he was determined to do anything just like other kittens.

"Roo was the smallest of his litter, but still tried really hard to keep up with his bigger siblings and was using his little leg to get around. He is the epitome of 'tiny but mighty.'" 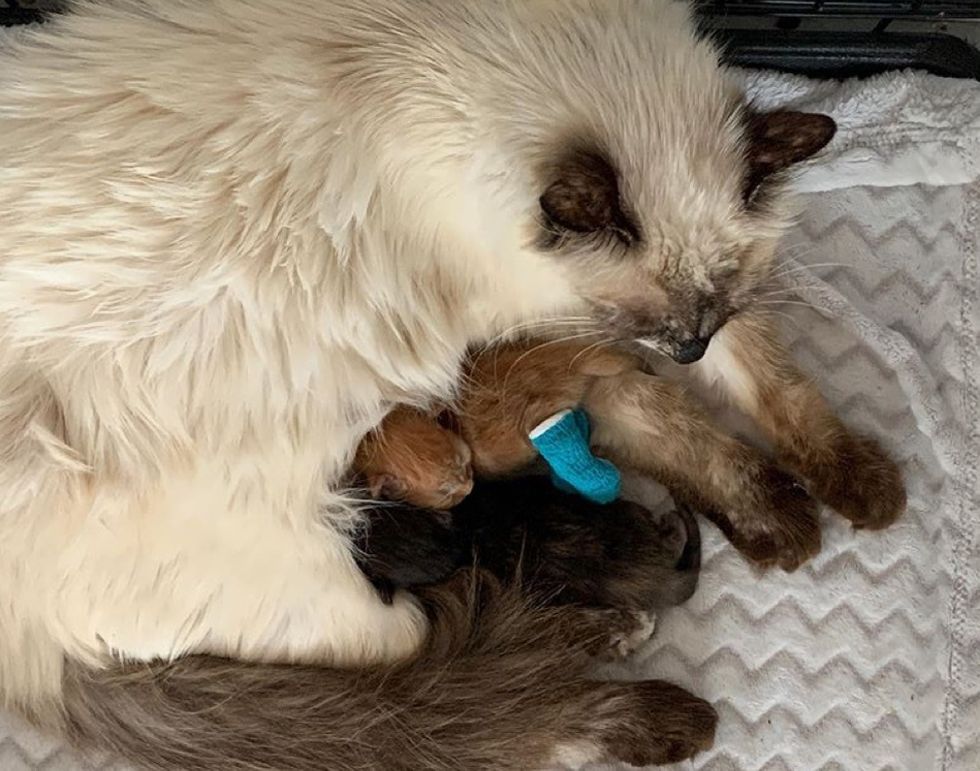 The ginger boy was always on top of the cuddle puddle with his siblings and never wanted to miss out on the action. He had a great appetite and was getting plenty of supplemental meals.

When the other kitties started to waddle and learn to walk, Roo got some help from his caregivers so he could take part in the wobbly clowder. 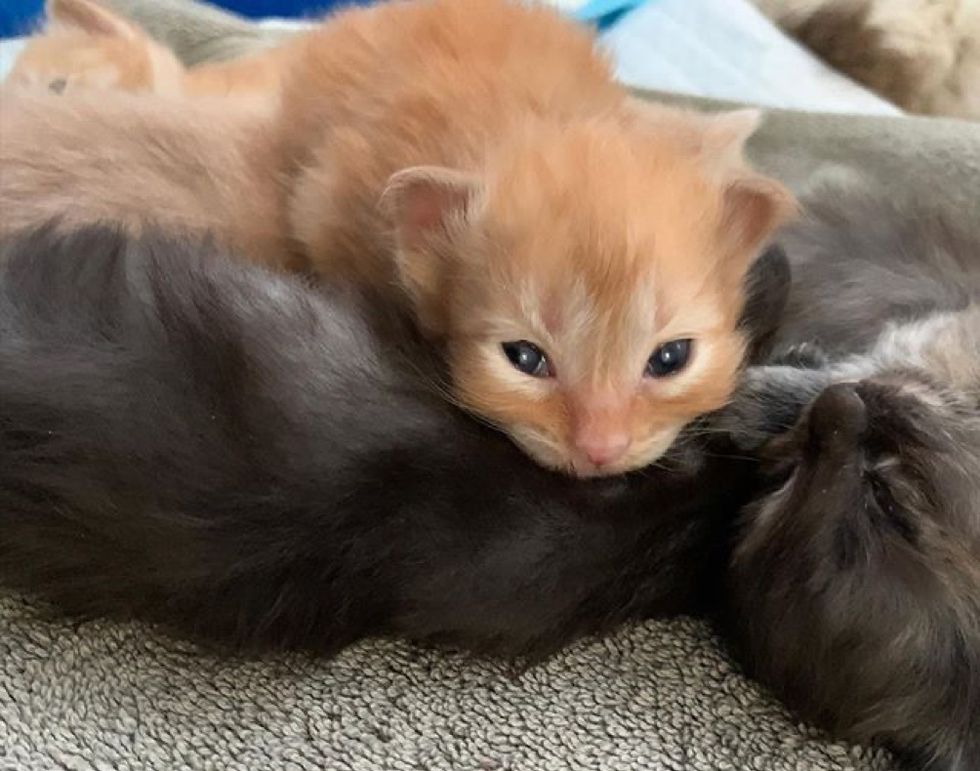 "We gave him support under his belly and encouraged him to move around. Between that support and watching his siblings play and walk, he started to wobble in his own way," the rescue said.

Roo was much smaller in size but wanted to join in the fun whenever he saw his litter mates play. "It's so good seeing him play, this helps him get even stronger and builds up his little muscles." 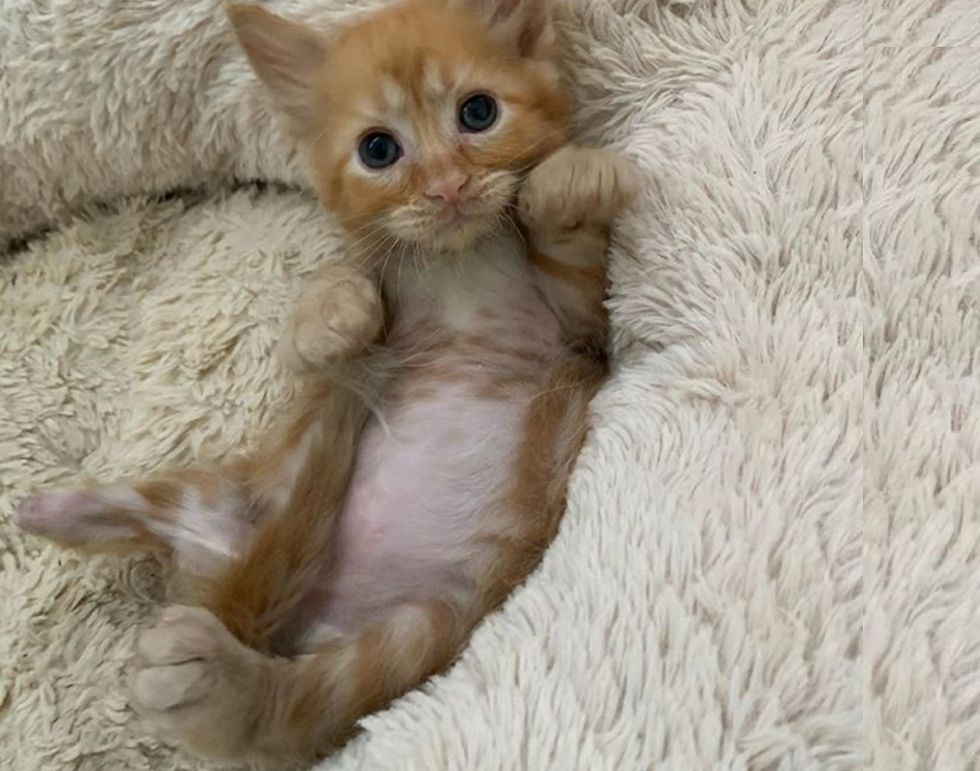 To keep his little stump guarded when he walks and explores, the rescue got some snazzy kitten-sized socks for Roo.

"Every day, we are in awe of this little guy. Nothing holds him back! We have made sure all the surfaces he walks on are as soft as possible, but still being something he can balance and walk on." 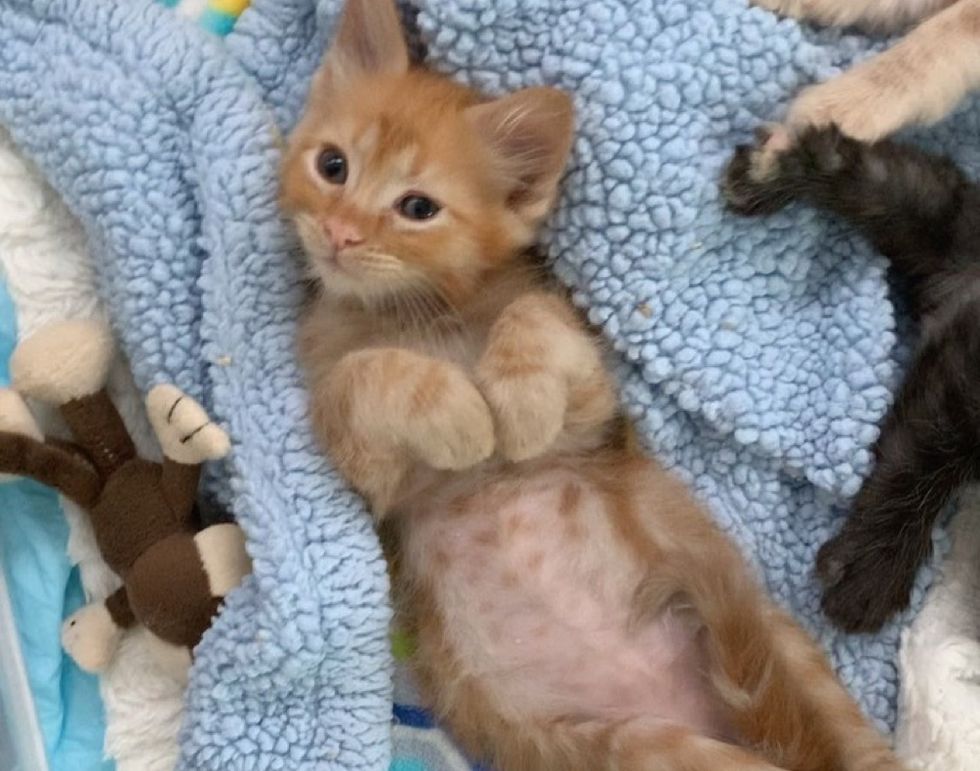 Around that time, a new kitten named Buttercup was brought to the rescue for a chance at a better life. Just like Roo, the tuxedo was born with abnormalities in his legs and needed daily physical therapy to help him improve quality of life.

The sweet polydactyl was just as determined. When he saw other kitties climb up the walls of their play pen, he tried to follow suit. In less than a month, he showed great progress in his walk and mobility. 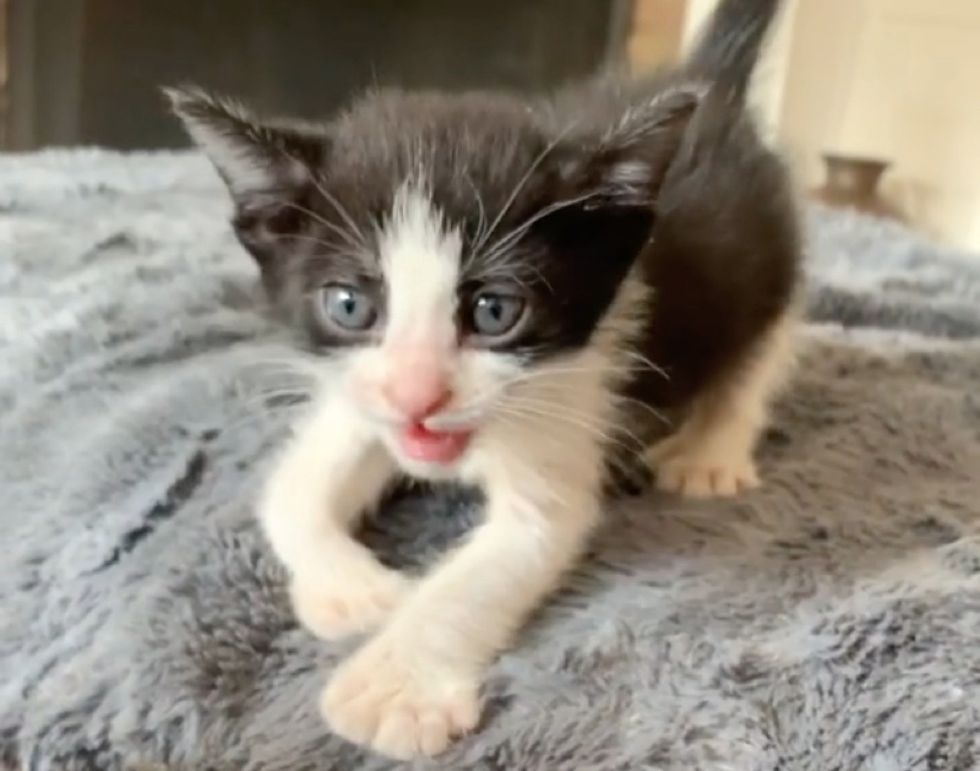 "(When he arrived), he could not use his right foot at all! After weeks of laser treatment to get inflammation down, heat and massaging and stretches, he is now climbing screens!"

Watch Roo and Buttercup in this cute video:

Roo the kitten and his perfect friendwww.youtube.com

Buttercup met Roo when he was introduced to the little family. Right away, the two buddies connected. The sweet tuxedo became the therapy cat to Roo.

He will snuggle up to his ginger friend when he naps, and get his buddy to play and exercise his legs when he is awake. 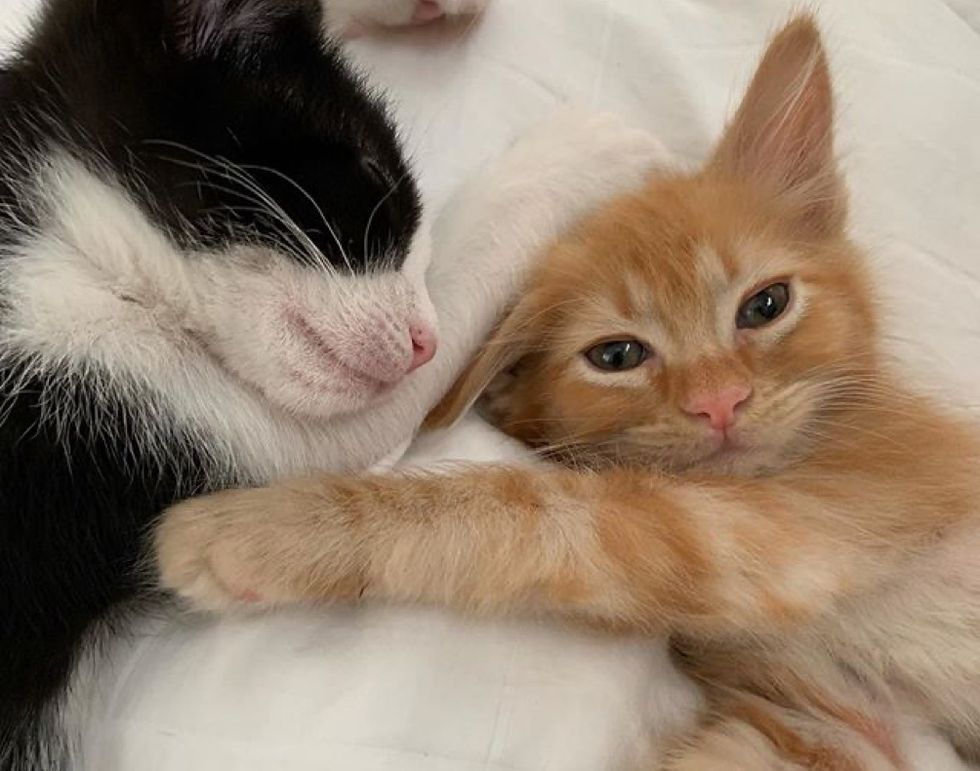 "Buttercup has been adopted but is staying for six weeks to help Roo," Alley Cat Rescue told Love Meow. "He encourages Roo to explore the house, and Roo is definitely getting stronger and braver under his guidance."

Roo has turned into an intrepid warrior kitty who holds his own and even wrestles with bigger cats. 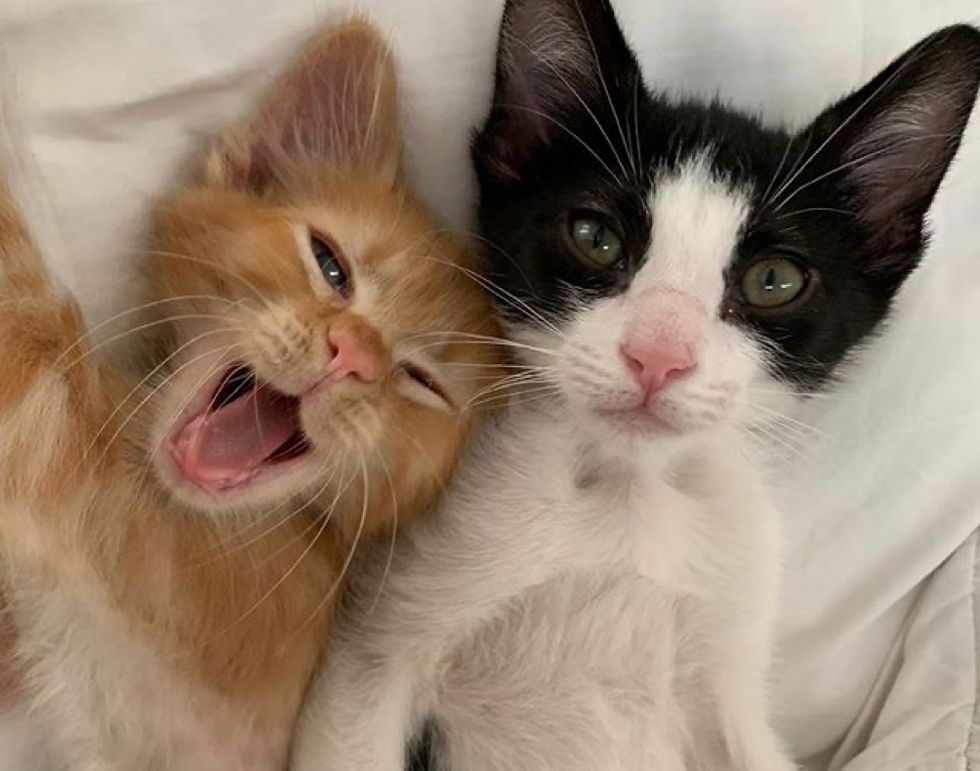 "He can do what everyone else does! Even with three feet he climbs the highest," Alley Cat Rescue said.

"He occasionally needs help, but is always happy to engage and have a discussion about his adventures. He is also a cuddle-bug and loves sleeping on your chest, or next to your head." 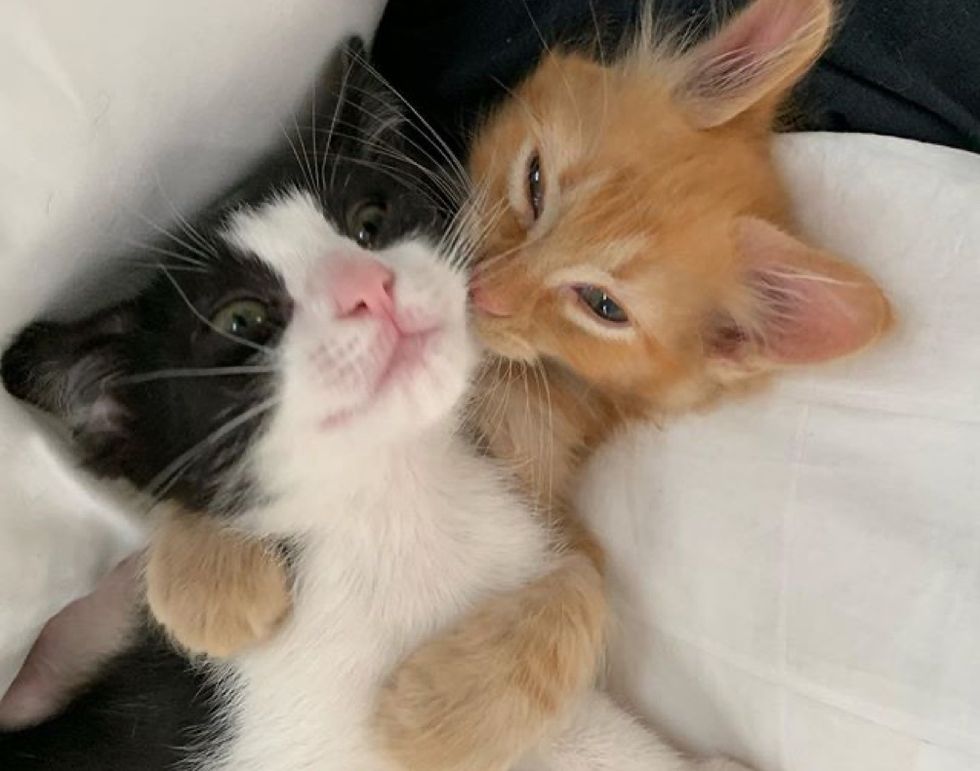 The little ginger boy is thriving in foster care and so happy to have the perfect buddy to exercise and nap with.

Roo is now ready to find a place of his very own. 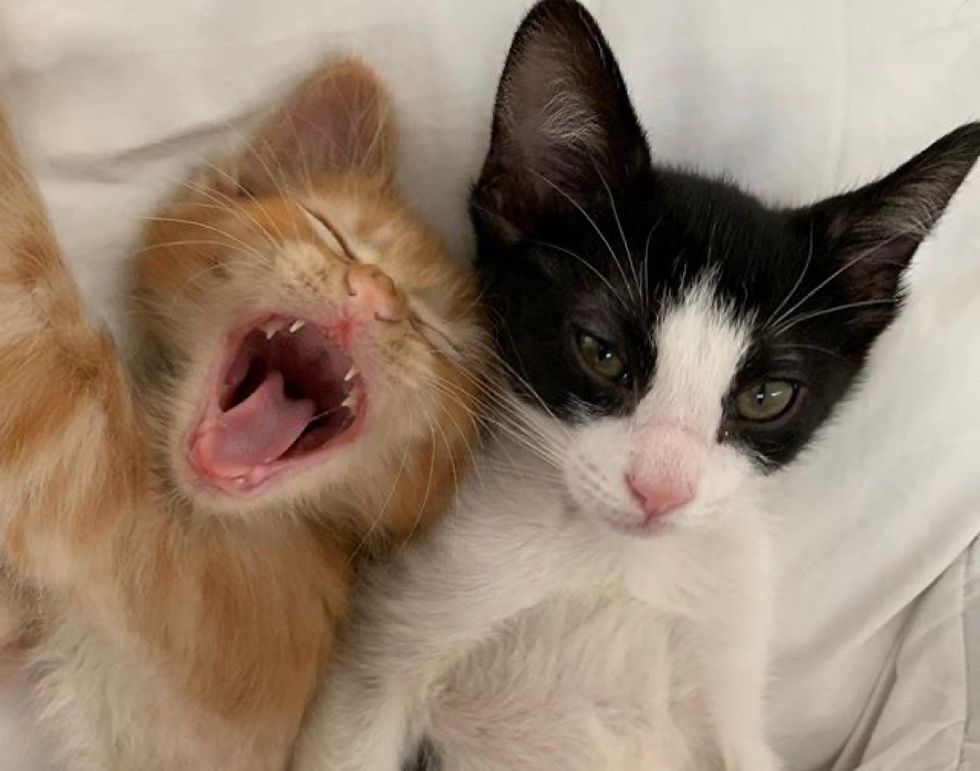