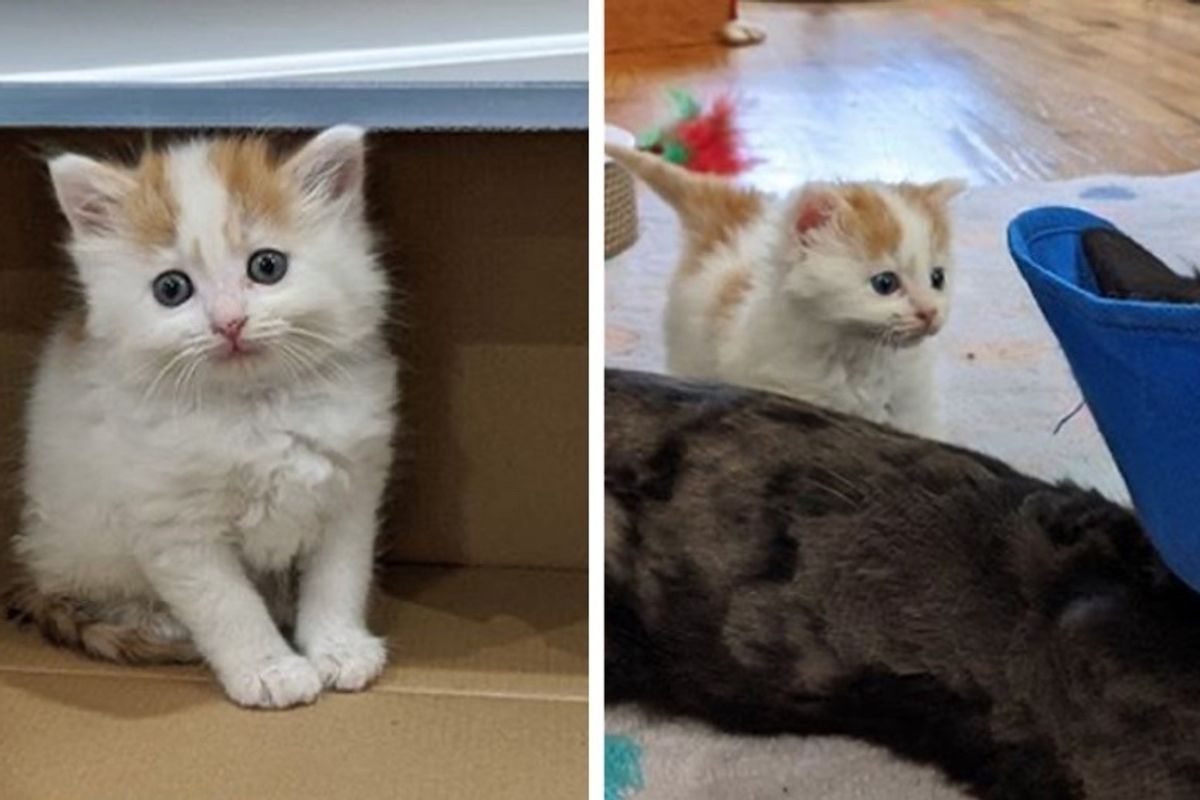 A little kitten met a cat at his foster home and made it his mission to win her over. 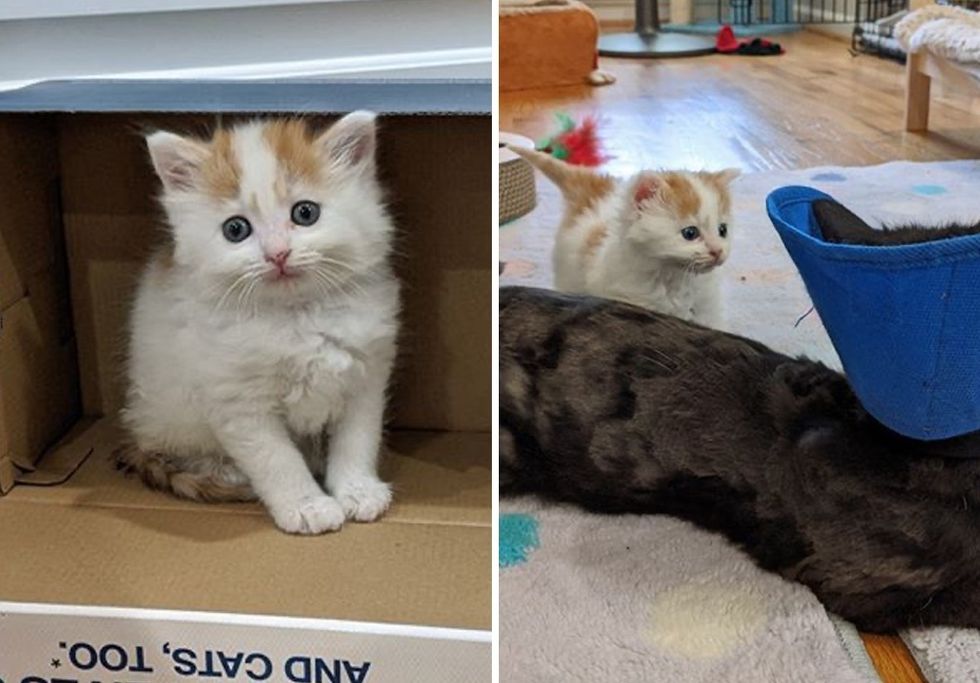 Two months ago, Forgotten Felines of Huntsville, a rescue group in Alabama, took in a very scrawny, scruffy looking cat who was found in someone's garage.

She was covered in matted fur and had a bad wound under her chin. While they were shaving off the knots and mats, they were surprised to discover that the cat was pregnant. Within 10 minutes, she went into labor.

The tuxedo whom they named Bunny, gave birth to six kittens in the comfort of a safe home. The mom wasn't producing much milk at first and required assistance to raise her kittens.

Robyn Anderson, a foster volunteer, took the little family into her care. She started supplemental feedings so the cat mom could begin to heal. 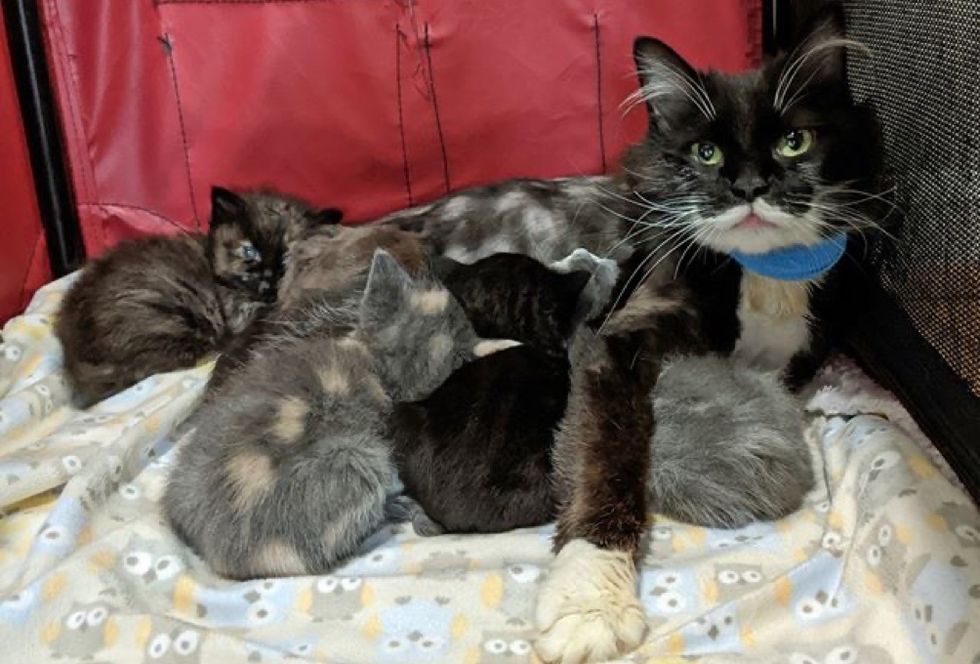 A few weeks later, Robyn was contacted about two new kittens (Clyde and Cutey) from a rural shelter that needed help. "They were turned in as strays, and though they were being bottle fed, the shelter is no place for small kittens," Robyn said. "We thought we'd see if Bunny wanted to take on another couple of kittens."

Robyn set up a meet-and-greet for the cat mom and the feline duo. As soon as Bunny sniffed the newcomers, she immediately expressed her disapproval with hisses, and promptly left. 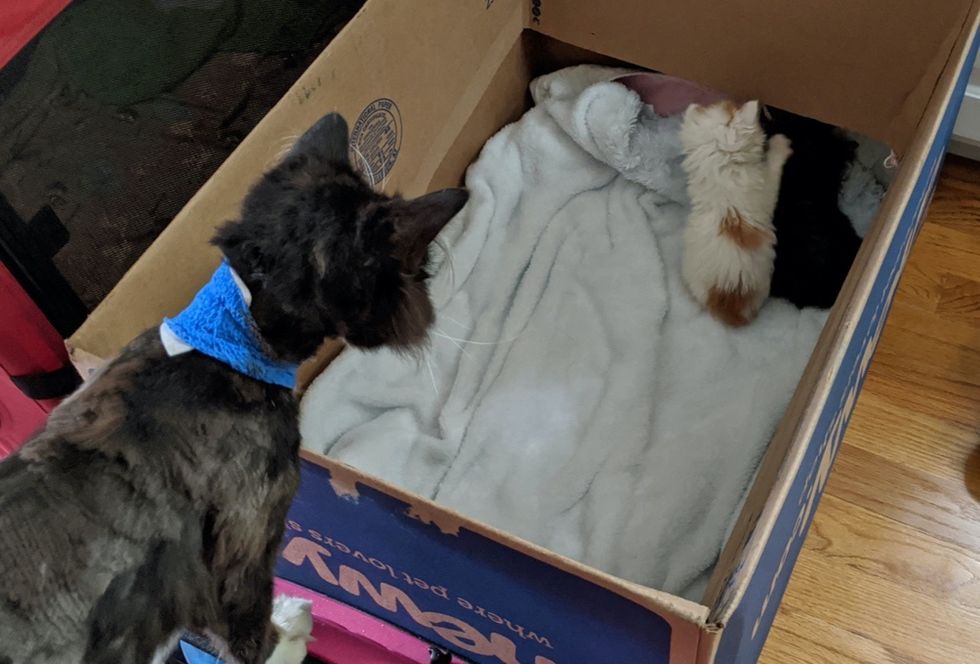 However, she didn't complain when the kittens snuck into the cuddle puddle of her own feline babies. "There was zero hissing or growling when they met Bunny's kittens. It was immediate playful friendship," Robyn wrote.

Clyde the ginger and white kitten quickly took to the cat mom and started brewing a plan of his own. Despite not being accepted right off the bat, he was determined to win Bunny over. 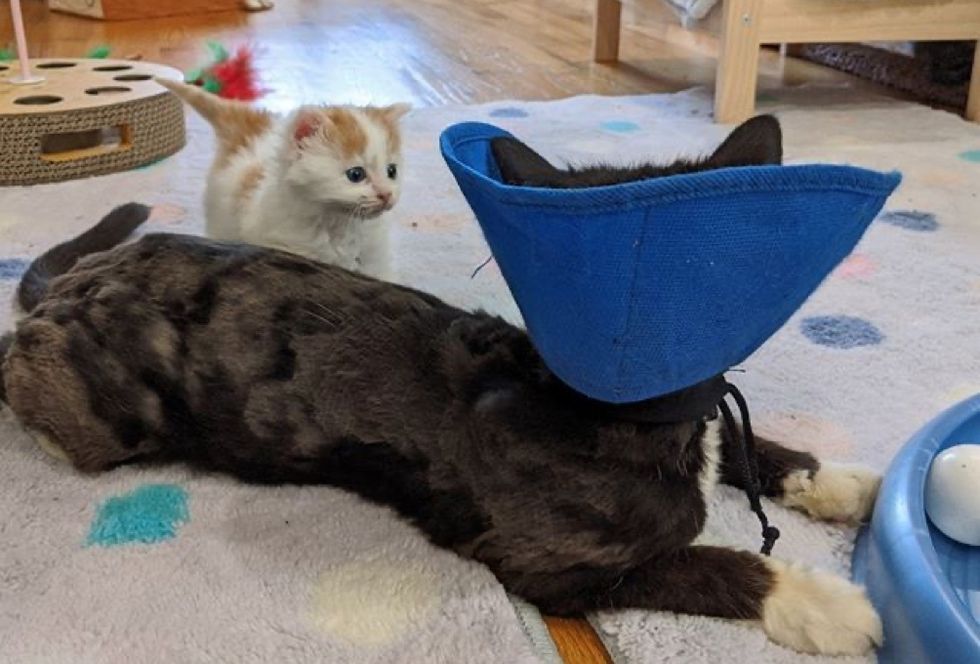 Clyde took every chance he could to get close to the cat mom. He would walk around her to make himself present, and then stealthily swoop in for a snuggle.

At first, he was met with some hisses, but the little kitten wouldn't take no for an answer. 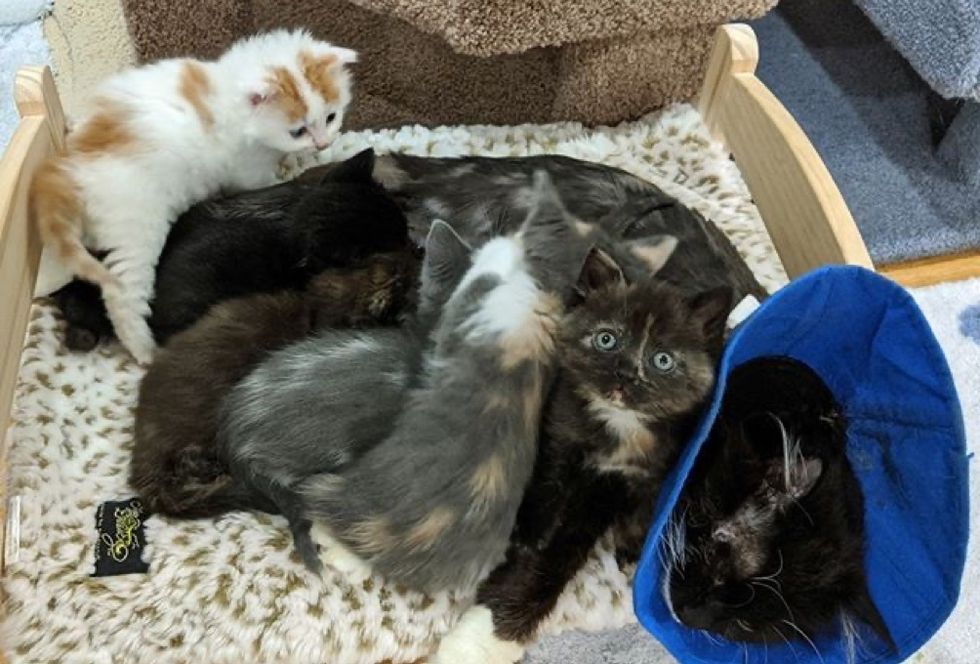 The more he hung out with Bunny's litter, the better he blended in. While his sister Cutey was more interested in playing with other kittens, Clyde made it his mission to win Mama's acceptance.

The persistent little kitten followed the cat mom everywhere she went. A couple of days later, Bunny began to lower her guard and even exchanged a few nose greetings with Clyde. 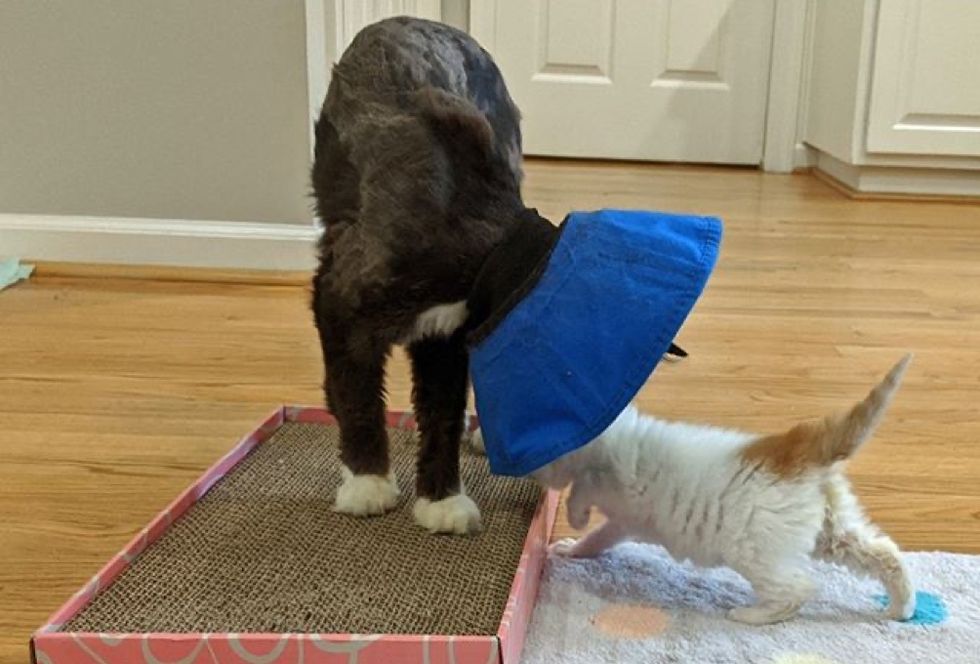 Whenever Bunny was on break from her babies, Clyde would come running in hopes of getting her to notice him. When Bunny was busy nursing her kittens, the ginger boy would sneak in a cuddle along with the litter.

Before she knew it, Clyde nuzzled his way to her belly. 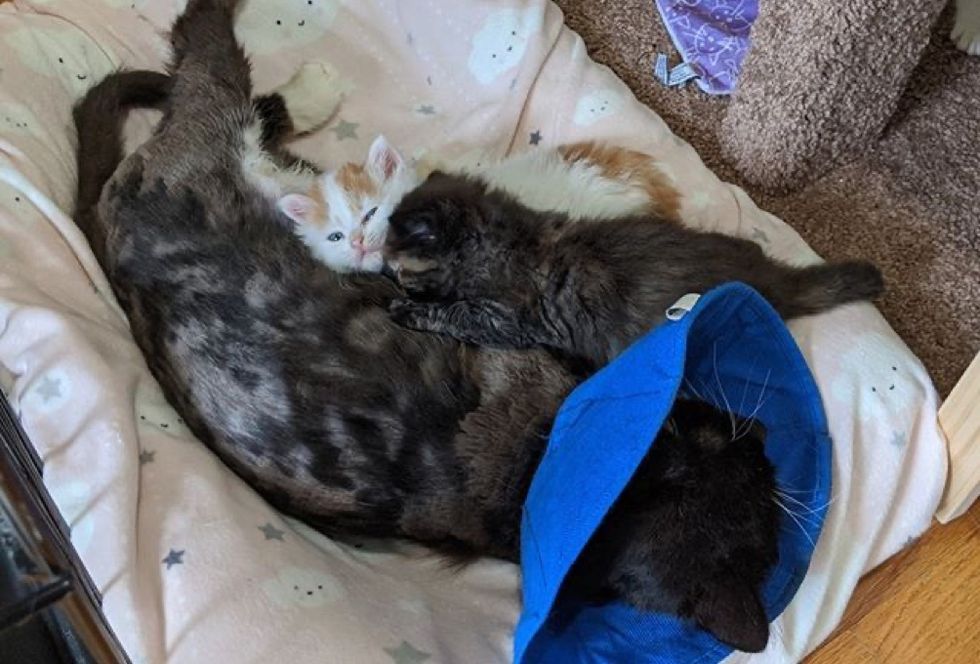 Clyde spent plenty of time on and around Mama Bunny, always trying to get her attention. He would climb on her back, play with her tail or just meow at her. 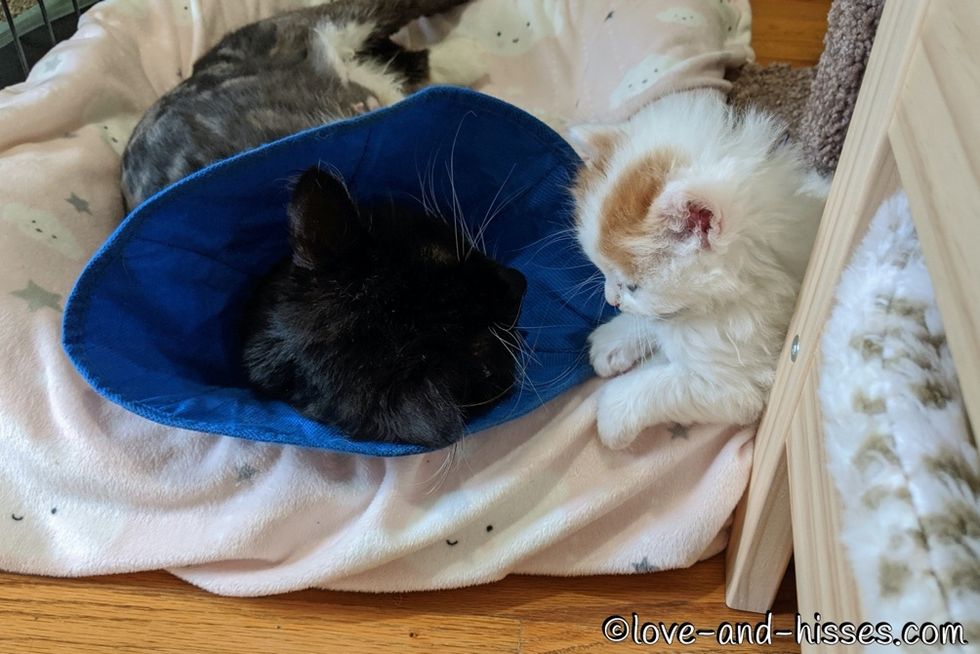 "When Bunny was hissing at him back in the beginning, he'd approach her, and she'd hiss. He'd come closer, and she'd growl. He'd smile and shrug and toddle off," Robyn said. "He is the most cheerful little guy and doesn't take anything personally."

Now, Bunny welcomes him to cuddle whenever he wants, and Clyde couldn't be happier. 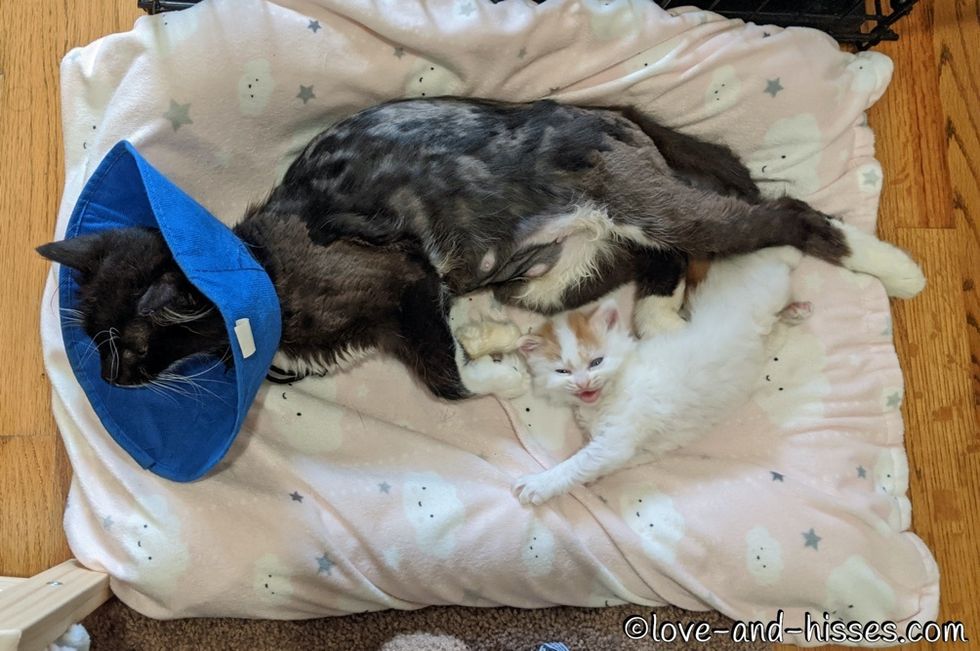 Clyde has become Bunny's little shadow. When he is not cuddling with other kittens, he is with the cat mom, soaking up the love.

Just when Bunny thinks she can have some alone time, the little mischief-maker is always near. 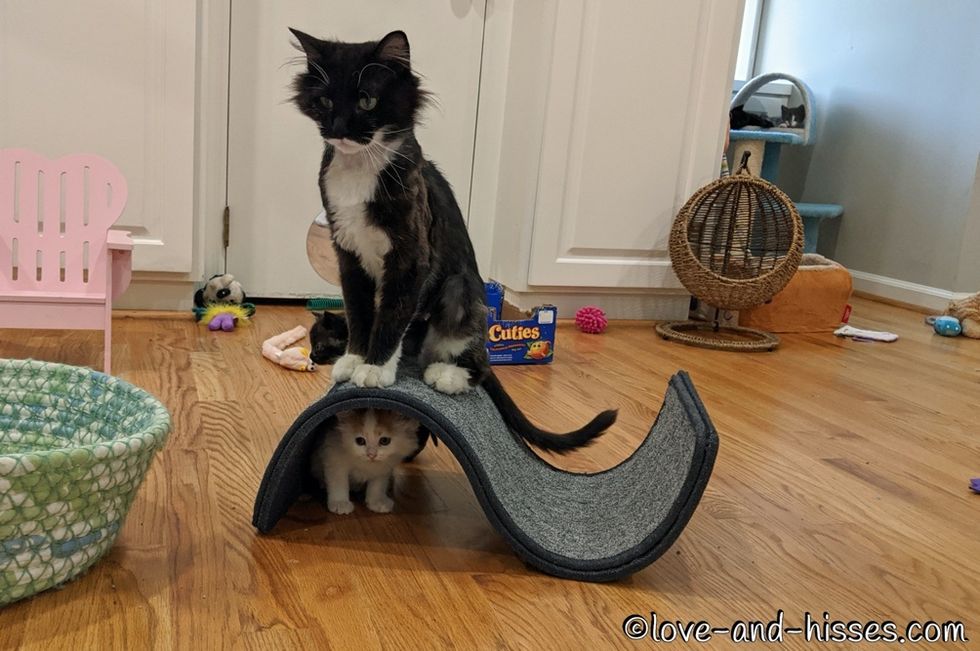 When Bunny licks him on his forehead, Clyde immediately looks up to her with admiration.

The sweet boy is so happy to have a mom to cuddle and many siblings to play with. 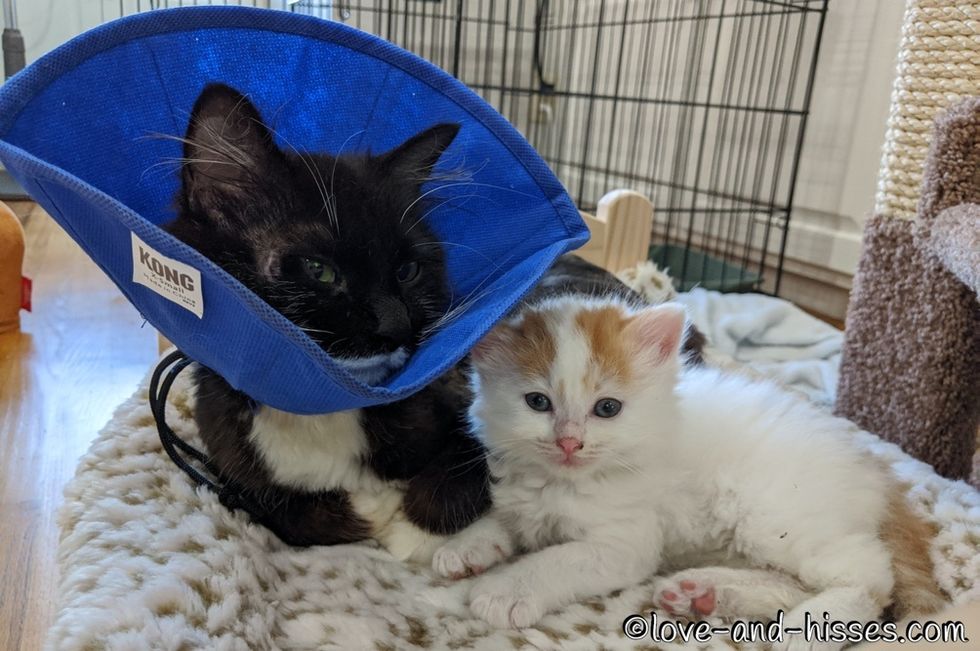 Bunny has grown to love her new kittens, especially Clyde.

Now she always has a purr buddy snuggled up to her when she naps. 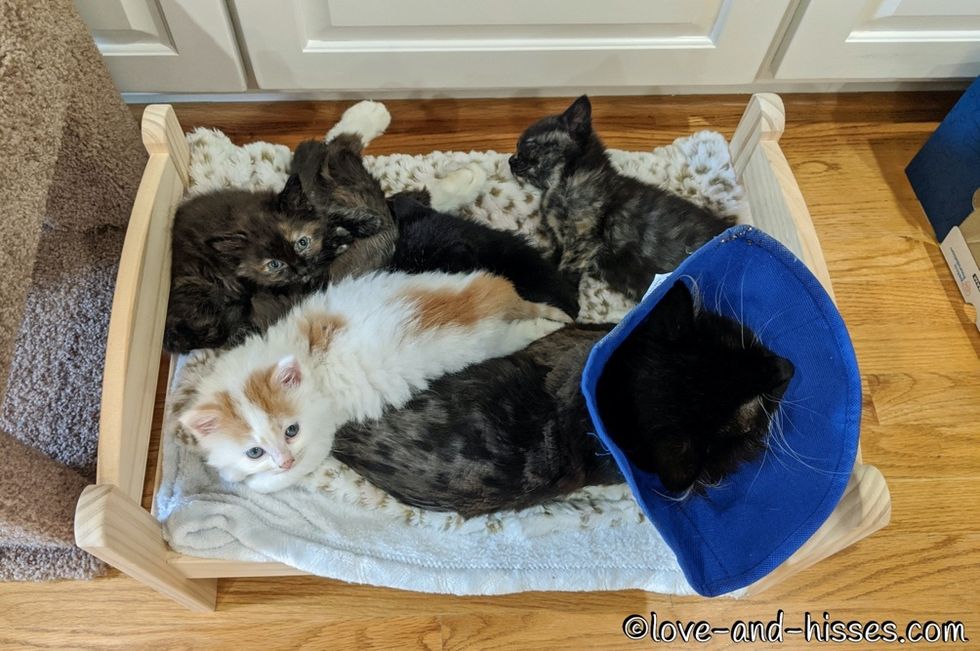