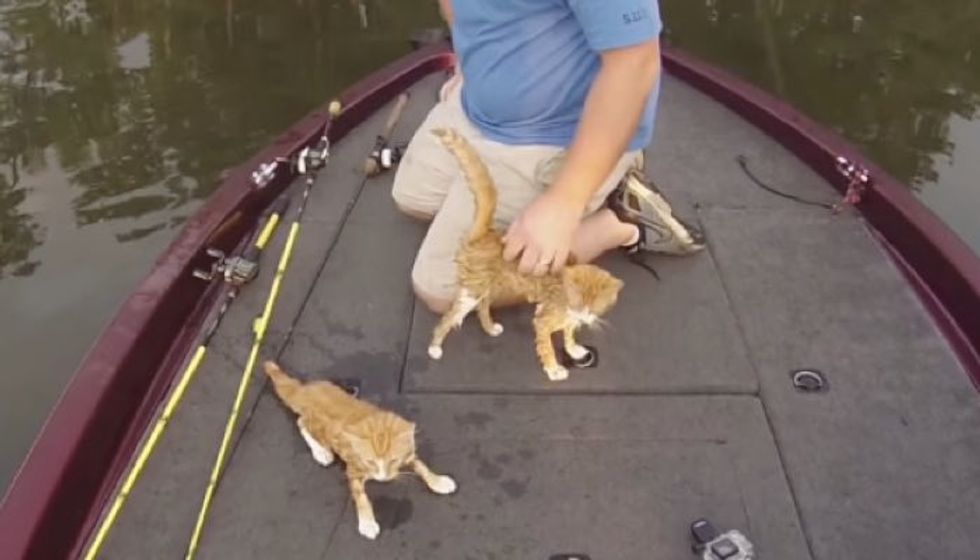 When two fishermen, Jason Frost and Brandon Key, were out fishing Saturday morning on the Warrior River in Alabama, they saw not one but two kittens jump off the river bank and swim towards their boat.

"We were sitting there, fishing, facing the bank, and then behind us we hear a splash," Frost told Buzzfeed News.

"I thought it was a fish jumping out of the water. I turned around and saw something swimming in the water - and then we heard it meow."

"This is by far the craziest thing I've ever seen," he added. "Nobody I've spoken to has ever seen anything like this. Nobody even knew cats could swim."

As he pulled the ginger cat to safety, his friend Key heard another splash and saw a second cat making his way to their boat.

"There were no houses for miles," he said. "Somebody probably dropped them off there in the middle of the night. They were so desperate they swam all the way out to us and almost jumped in the boat."

They dried off the kitties and gave them some water to drink, then the two fishermen spent some time hanging out with their new feline friends.

"They played with us all day," Frost said. "They were loving on us and people went by and thought we were these crazy people who took their cats fishing."

By the time they got to shore, a family with two little girls saw the kittens and fell in love. They offered to adopt them.

"Everybody always has a crazy fishing story, and that's all it is, is a story," he said to AL. "If I wouldn't have had this on video, everybody would have thought I was crazy."

Updates! The kitties have been named Warrior and River, and are living happily at their forever loving home.

They are doing well and both have been fixed.

Warrior and River are never apart.

They have grown up so much! Happy and loved!

Kitten Who Can't See, Now Has Another Cat to Help Him Navigate and Learn to Be Brave