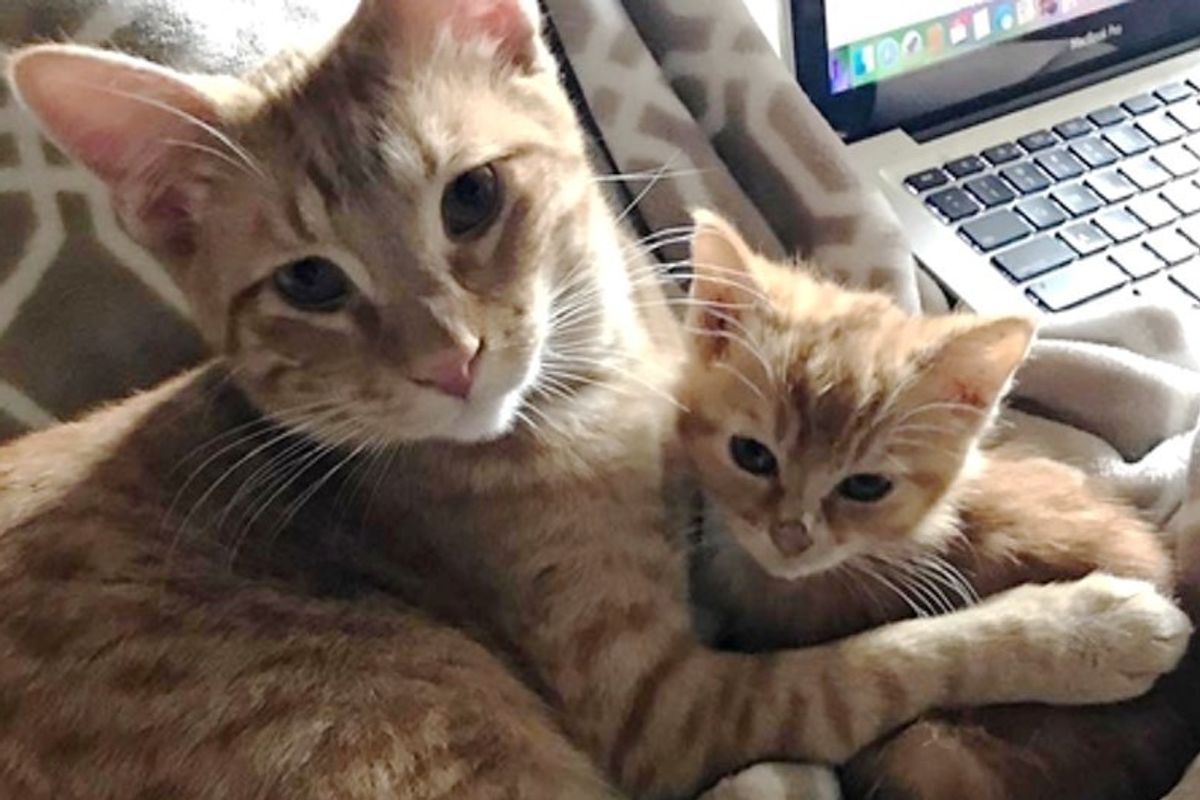 Ginger Cat Becomes Substitute Dad to 4 Foster Kittens Who are In Need of Love.

A ginger cat took on the role of a substitute dad to four foster kittens whose mom was away for treatment and could't be there.

Leo, the resident cat at the foster home, stepped in to help.

Two weeks ago, a feline family of five (all gingers) were spotted at a mobile home in Oregon. The mother cat and her four kittens were living on the roof or in the pipes of the property. Krissy, who works at a veterinary clinic, offered to trap the kitties and get them help.

Five minutes after they set a trap, the mama cat came down from the roof and went into it. Krissy and her fellow rescuers placed another trap on the roof. They hoped to get all the kittens to safety by nightfall.

"I set traps on the roof to catch the kittens one by one," Krissy told Love Meow.

Many hours later, they got the last kitten. "We checked back on the trap around 5PM (right before it got dark and things would get tricky), and the last kitten was in there!"

At the vet, they discovered something fluid-filled inside the cat mama's belly. "We suspect that she might have either a pyometra or mucometra… and we wanted to make sure she stopped producing milk so her mammary glands would shrink in case we had to do an emergency surgery on her," Krissy told Love Meow.

While the mama cat, named Noodle, was being monitored at the clinic, Krissy brought the kittens home to foster. She and her boyfriend began to socialize them by giving them cuddles and lots of pets and head scritches.

After a week of intense cuddling, the kittens started to warm up to the couple. Though still a bit timid, they couldn't help but purr when they were held.

Krissy introduced her resident cat, Leo, to the foster kittens. Sweet Leo immediately took a liking to his tiny lookalike friends and started purring aloud while trying to greet them with nose kisses. (Scroll down for video)

"He's the nicest 7.5-month-old kitten ever, and they seem to think he's their mom. When we have them on our lap to socialize, Leo comes up and grooms them. He also plays with them through the playpen they're in," Krissy told Love Meow.

"He teaches all the new cats and kittens that other cats are okay! They're sometimes terrified of other cats until they meet him, because he's so nice, will give them whatever space they need, and reassures them. He's the one kitty in my household that is universally loved by everyone!"

The shyest little boy, Roni, found himself snuggling in Leo's arms, purring up a storm.

Just like the four kittens, Leo is also a rescue, who found Krissy when he was four weeks old. He was saved from a feral colony in a rural area.

"Originally I was going to adopt him out, but he loves other dogs and cats, so I just couldn't let him go! He's everyone's favorite foster brother in the home."

Leo after he was saved from a feral colony.Krissy @fosterkittenmemoirs

"All of the kittens absolutely love Leo! The second he comes around, they start purring. He's just such a nice guy, and will pin them down to groom them," Krissy told Love Meow.

"When the kittens would try to leave, Leo would grab them to stop them!"

Leo continues to look after the four kittens (Roni, Tini, Lini, and Toni) while their mama is getting the help she needs to recover.

Despite being a kitten himself, he's helped foster many kittens and even a puppy that Krissy has brought home. Leo shows them the same love that he received when he was rescued.

Watch this cute video of Leo and his foster babies. "Roni even tried to nurse on him!"