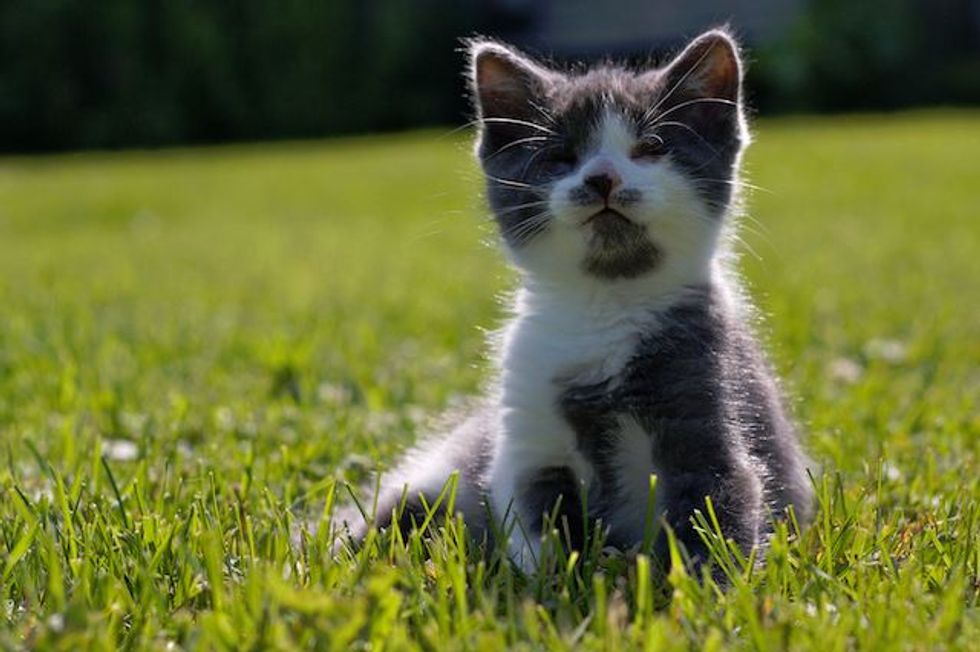 My mom and I were actually looking to adopt a new cat when we got Jack. I have a friend who boards her horse at a local riding stable and one of the barn cats gave birth to a kitten. It seemed that spaying didn't work on the cat, so she gave birth to a single, deformed kitten and was not able to produce milk. Luckily the owners recently had her fixed, so I'm hoping this doesn't happen again.

Jack (at the time he was known as Stevie Wonder) was born without eyes. He's very lucky with his timing. He grew up having other kittens to play and socialize with, and was used to people from the moment he was born since there are always kids hanging around the barn. He was a favourite amongst the students at the barn. However, when it came time to find the kittens homes, no one knew where Jack would end up. Although some of the kittens already had homes, the ones they couldn't find homes for would go to the local vet's to be put up for adoption. They didn't want to do that with Jack. There was no doubt any of the "normal" kittens would find homes there, but Jack was special.

That's when I got an e-mail from my friend. All she asked was "Do you still want one of the kittens? There's one here with no eyes and no one can take him." She knows me too well. Without thinking I told her that I did want the kitten. I wouldn't be able to put him in the barn, but who cares?

I changed his name from Stevie Wonder because I used to have a cat named Stevie who passed away a couple years ago. I'm a huge fan of old TV shows and thought Jack Tripper was a good name for a kitten who couldn't see. He has done a few classic "Jack Tripper" moves, too. Although he gets around very well (especially now that he knows the layout of the house) but he sometimes does trip or fall over things.

When we first brought him home Jack stayed mostly in my room. He walked cautiously around, sniffing everything. After about a day he had no issues running around, jumping onto my bed and climbing on everything. It wasn't long before he mastered the rest of the house, either. He went through a time where he could climb the stairs, but couldn't get down. He would sit at the top and cry until someone came and got him. He's big enough now that he can get down on his own. Every now and then when he gets disoriented he'll stop and cry. But we just call his name and talk to him and it isn't long before he finds his way back to us.

He also went through a period where he would wake me up every morning between 5 - 6 by licking my nose. I'm not a morning person and like my sleep, so I would try everything to get him to stop. I'd pull him away, but he'd come back up and start licking again. I'd turn over, but he'd walk over to my other side and lick my nose some more. I'd even try lying on my stomach, but he'd crouch down, turn his head upside down, and keep on licking my nose! He's stopped that for the most part now. He'll still lick my nose, but usually waits until I'm awake now.

Also, a few weeks after getting Jack, we got a new barn cat named Bear. Bear is very friendly and likes to come sit outside with us in the evenings. I always take Jack outside at that time for some fresh air and exercise. He loves to run (at top speed!) around the back yard and gardens. Bear and Jack have become best friends. It doesn't matter that he can't see, Jack always knows when Bear is around. He'll run across the yard straight to Bear and wrap his front legs around his neck in a big hug. They chase each other around and wrestle, and when they're tired they'll lie down in the grass together.

He has absolutely no eyes at all. Because of that, his eyelids are too long since they have nothing to cover. His eye holes tend to get weepy because that irritates them a little. As he's growing, he's started to grow into his eyelids and may have no issues there at all. But if they're still irritating him, our vet may consider sewing his eyes shut. Other than that, he's perfectly healthy.

Jack is truly an inspiration. I've owned a lot of kittens in my life, but Jack is the happiest, most playful of them all. He doesn't feel sorry for himself. Heck, for all he knows, all cats are just like him. People who know Jack don't feel sorry for him. They cherish him for the treasure that he is. I have talked to a few people who haven't met him personally who tend to pity him, but they just don't understand. Jack doesn't need pity. I think Jean (who has Gumbo the eyeless ginger) said it best when she told me that cats don't have disabilities, they have adaptabilities.