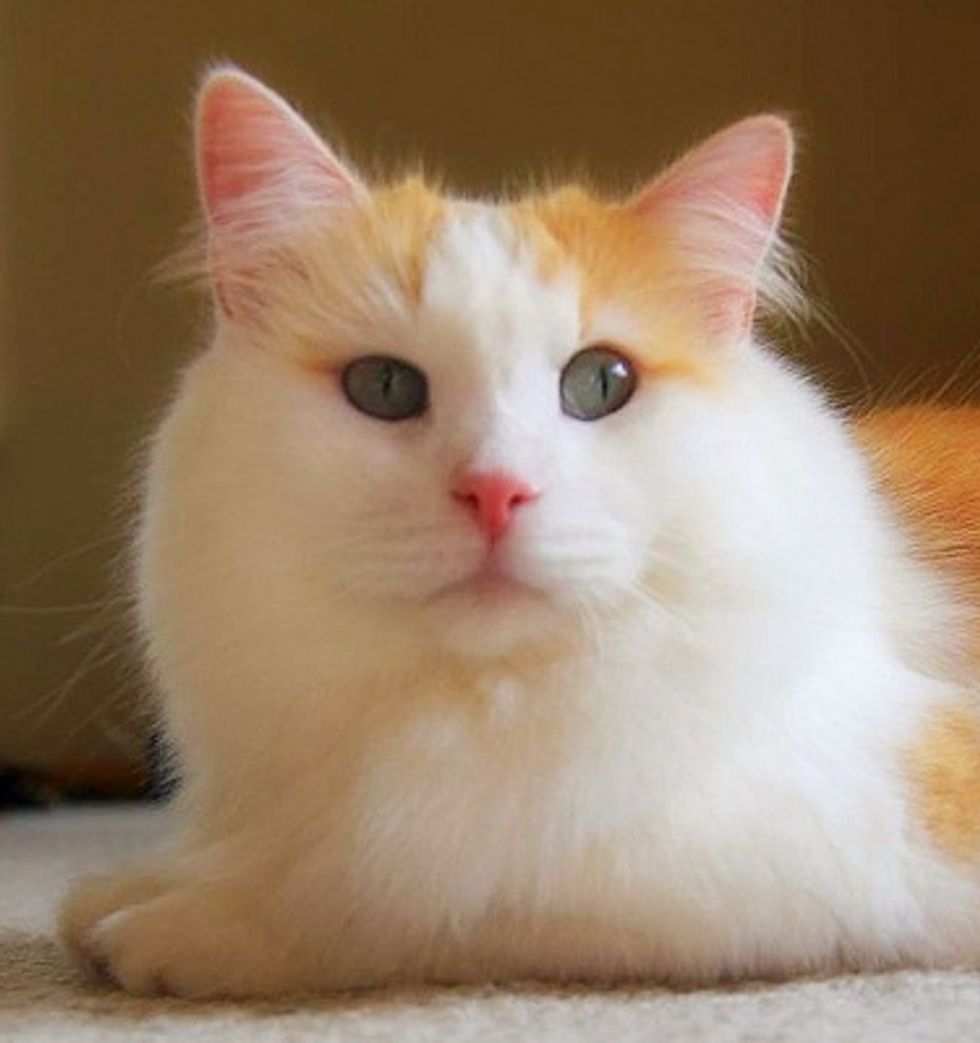 Jackie the Beautiful Cat Inside and Out

Jackie a fluffy ginger and white cat was rescued hours before he was about to be put down at a kill shelter in southern Illinois. Jackie met his best friend Shadow before they were rescued. " They aren't litter mates; they were put in the same cage at that shelter and bonded with each other to the point that they could not stand to be out of eye-shot of each other. Maybe because they saw other cats taken away and not brought back; we took them right before they were going to be put down," said Felicie Anderson-Wilson, who used to foster Jackie and Shadow.

"Just from the way they behaved and looked, we think Jackie was an owner give-up. He was very protective of Shadow and also very nurturing and 'motherly' to kittens when we brought them in," said Felicie.

Jackie and Shadow stayed at a no kill shelter (Fur Keeps) for a very long time. Every day they were transported to a local PetSmart and placed in a glass cage, hoping someone could take them home. Unfortunately, having to adopt two adult cats together was not an easy decision for most people, but whenever someone stopped by their cage, Jackie was always eager to meet and greet.

My husband and I shop at the same PetSmart several times a week. The first time we saw Jackie, we thought he was full of personality, very sweet and round and fluffy. My husband would bring a laser pointer and put it against the glass to play with him and Shadow. They were always excited about any attention they could get from people.

Every time we went to PetSmart we would drop by and say "Hi!" to them. Many weeks went by, we thought it was time to adopt another cat or two so our cat Flip could have a friend to play with. We immediately thought about Fur Keeps. For the very first time we got to hold and pet our two fur friends. Jackie purred immediately after I touched his little nose. He gave me a little head bump and wiped his scent on my finger. As soon as I picked him up and put him in my arms, I knew he and Shadow were coming home with us.

Jackie and Shadow are the most loving and affectionate cats we have ever had. Whenever I call Jackie's name, he runs up to me and follows me around. Jackie adores our attention. He grabs us with his tiny little paw to let us know that he needs something. When he is in his crazy, playful mode, he will run across the living room back and forth many times, chasing invisible critters and randomly running into very tight spaces.

When it's bed time, he likes to curl up against daddy's shoulder. Sometimes he'd take over the entire pillow. Daddy often wakes up seeing himself having no pillow at all because Jackie has pushed him to the edge of the bed. It's one of those cute things he does that always puts a smile on our face.

I am so thankful that we have Jackie and our other kitties in our life. They were given a second chance and now they are part of our family.

Jackie and his best fur buddies inspired me to start Love Meow and the Commentathon project to share cat stories and rescue stories from all over the world and to help rescue groups in an effort to bring better lives to our furry friends. It's wonderful and encouraging to know that there are so many cat lovers out there.

Check out Jackie's blog at MeowFamily.com.