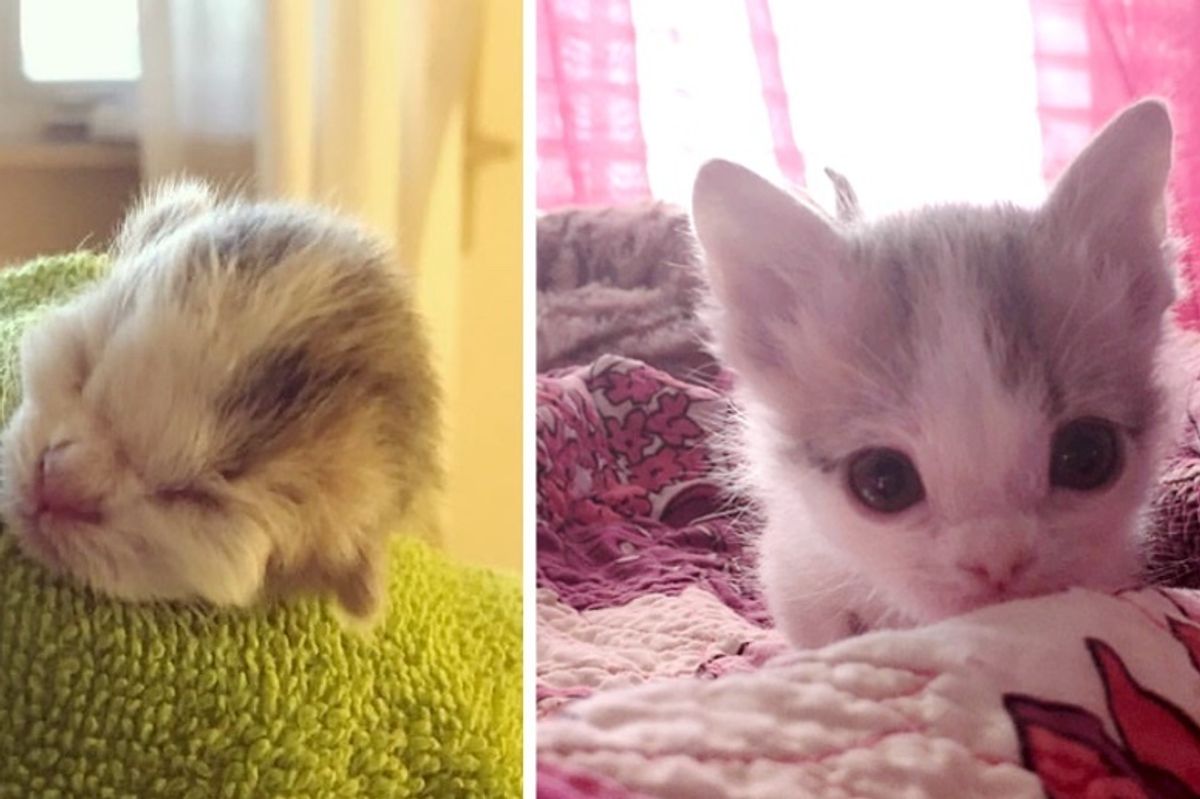 A few weeks ago, a stray cat was spotted wandering outside a family's home in Idaho. The next morning, the home owners found two newborn kittens in a sagebrush, but only one had survived.

While Annalise Burke and her mother were looking for more kittens, they found the cat mama. They tried to give the kitten back to her but she was not interested in nursing the baby. As the kitten started to fade, they rushed them to a local rescue group in hopes of getting them the care they needed.

When they came home from the shelter, they were stunned to hear yet another kitten's cries. "I thought I was hallucinating, but lo and behold, we found a third kitten underneath our shed. She looked identical to the one who had passed," Annalise told Love Meow.

"We dug to get her out. Her face and mouth was covered in dirt, with dirt all inside her throat. She was coughing and wheezing."

The shelter and the animal hospital were closed at the time, so they went to get fresh goat milk from a local goat farmer and started feeding the kitten through a syringe.

The tiny bundle of fur (whom they named Gemma) was in terrible shape and barely holding on. The family stayed up all night, taking turns feeding her every hour, trying everything they could to keep her alive.

The next morning, when they contacted the shelter, they learned that the cat mom hadn't been nursing. Despite their very best efforts, the other kitten who was with the mama, didn't make it. Gemma became the sole survivor of her litter.

"We decided that even though we didn't have room, we would find a way to raise her. We took her to the vet and he said she had a high chance of dying. The vet asked if we wanted to put her down peacefully, or see if she had a small chance of living," Annalise said.

Annalise put her summer part-time job on hold so she could care for the kitten. "My older sister drove down six hours and used her vacation days to come help me. Those first two weeks, we both had 12 hour shifts, feeding, wiping, and putting her to sleep," she told Love Meow.

"I remember the beginning was so exhausting. I never knew what day it was, or the time in the clock. At this point, we took the situation feeding by feeding. I didn't know if she was going to live or die, and she scared us several times after that by stopping breathing, having crazy colored poop, and getting dehydrated."

But somehow, the little miracle kitten pulled through. "I didn't have confidence in her living until one month in, when her problems began to go away and she was acting like a normal kitten."

Gemma never ceased to amaze her humans with her fight to live. As soon as she got better, she began to explore and play.

She met her new sister Nova and became her biggest fan.

Despite all the odds stacked up against her, Gemma bounced back and started to thrive.

"Her name comes from 'Gemini' — after the sibling she has that looked identical to her. I am really regretful we couldn't have saved the sibling that was with mom, but we didn't know any better and did our best," Annalise said.

"It was worth putting my life on hold for Gemma. She is truly an angel. I am very thankful to my parents and sister for their help and support. I couldn't have done it without them."

Sweet Gemma just turned five weeks a few days ago. "Everyday we are so amazed by her progress and growth from a blind bean to a playful girl! There are still so many more hills to climb but we are looking forward to taking them down together."