Two little kittens were found abandoned in a basement of an empty house. They were cold to the touch, struggling to stay alive until they found a cat mom who would save their lives. 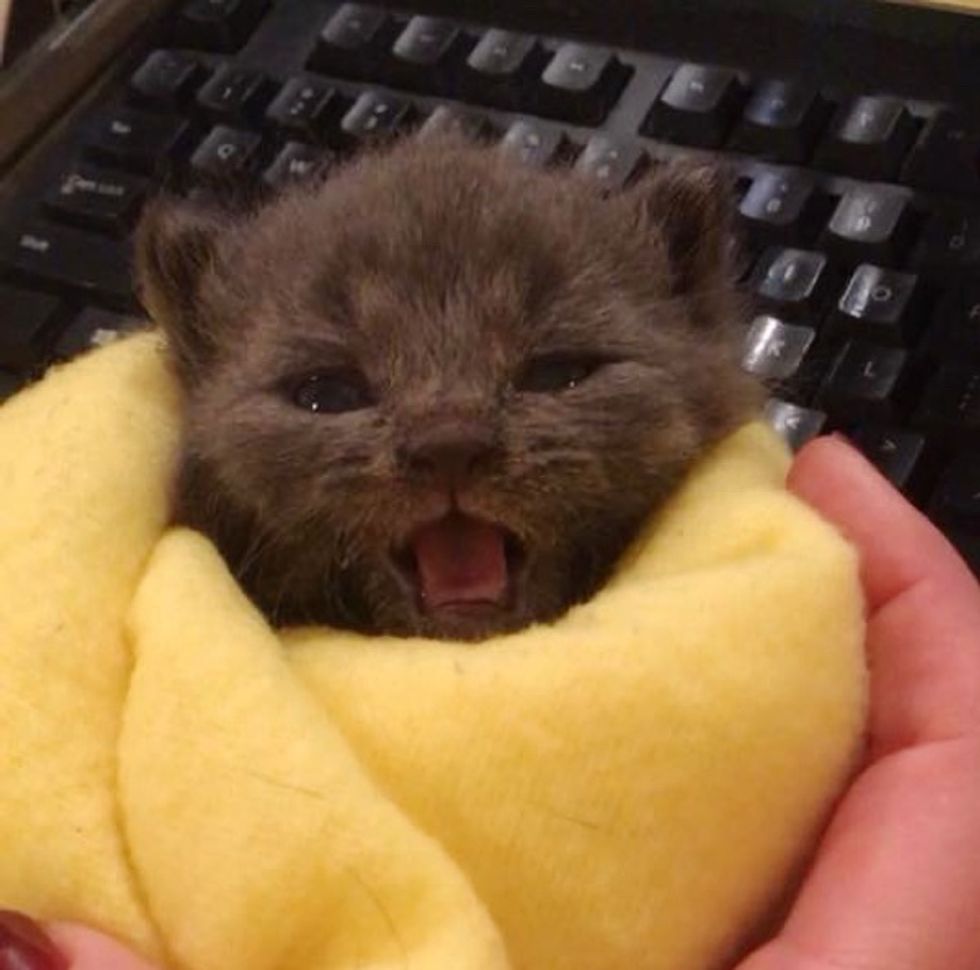 Karen Timmons (rescuer/foster based in Philadelphia) and her husband (Nate) were contacted about a litter of kittens that had been left behind in a basement. When they arrived at the property, they were stunned by the horrid condition.

"There was human waste, maggots, dead cats. We heard squeaking and I thought it was mice," Karen told Love Meow.

To her surprise, the sound came from a tiny grey kitten (Grey Hulk) who was lying on top of his listless brother (Whitey). Karen immediately put them in her shirt to warm them up while trying to wake the weaker kitten with some sugar water. 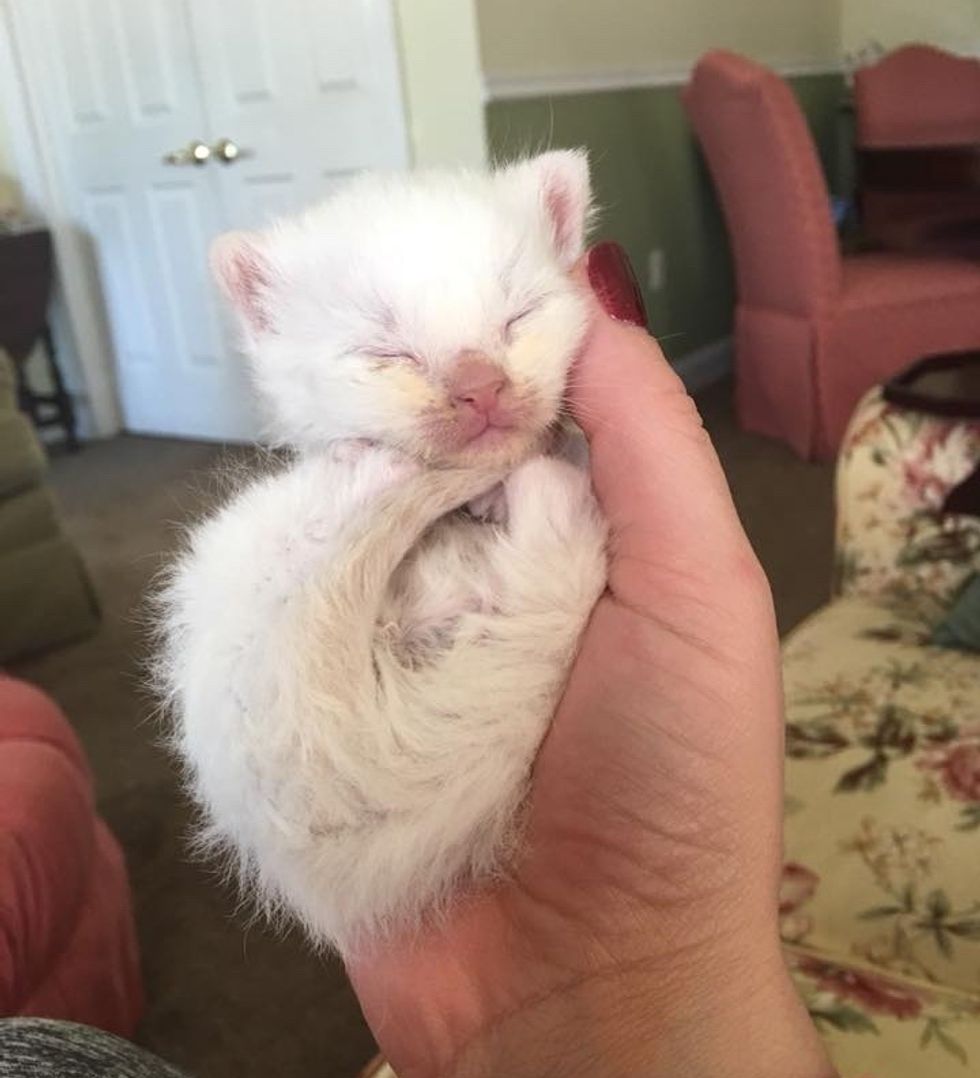 "The weaker kitten was not thriving at all and I had to make several ER visits with him," Karen added. "I was watching him fade, and there was nothing I could do."

Knowing that kittens that age could benefit tremendously from having a cat mom, Karen decided to seek help from the Philadelphia cat community. 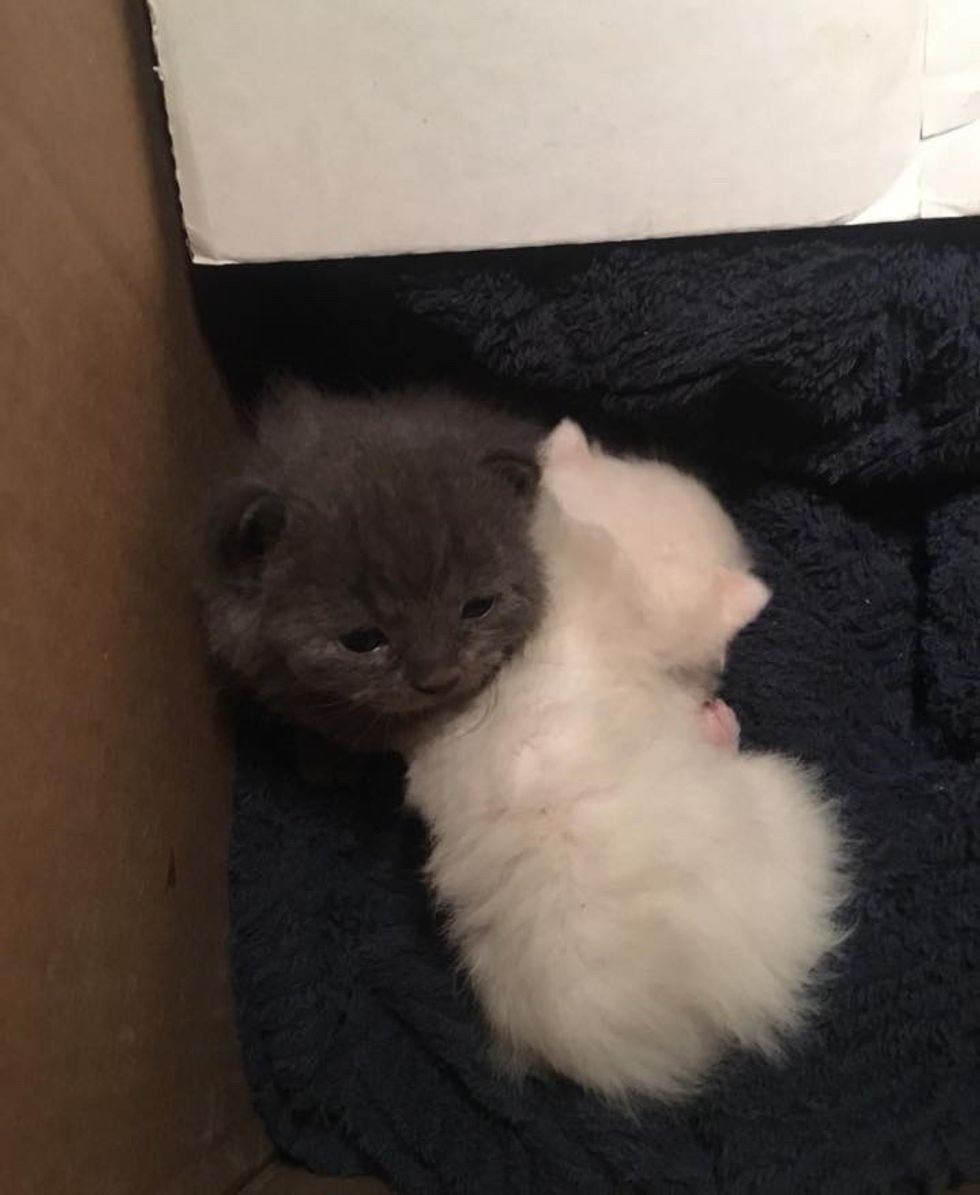 Around the same time, a family reached out to Karen about a stray cat named Nubby that they had rescued. She had recently lost all her kittens and was not doing well.

They asked if they would help the mama heal by letting her nurse the orphaned kittens. 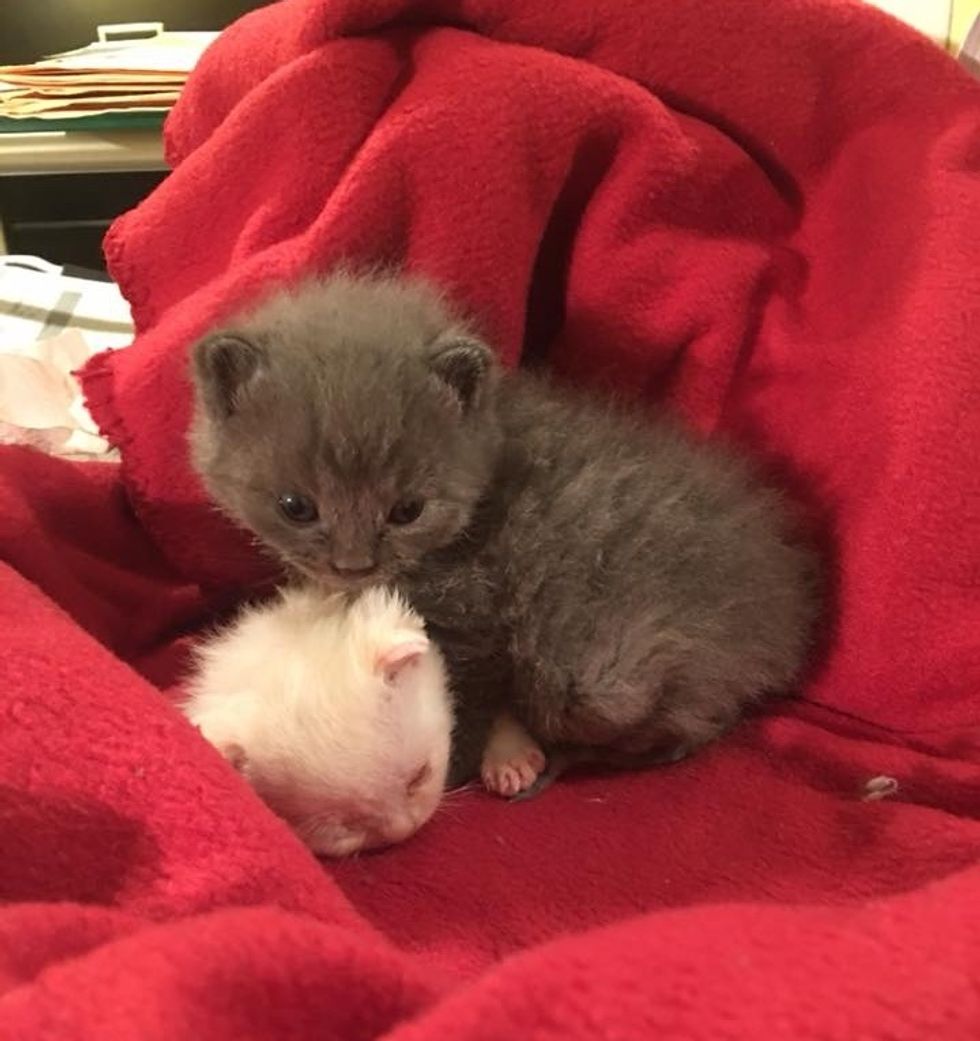 "We brought the grieving mom in and she immediately began cleaning Whitey. Their interactions were just beautiful. She needed them and they needed her," Karen told Love Meow.

Incredibly, the kittens bounced back as they continued to nurse and receive tender loving care from their surrogate mom. 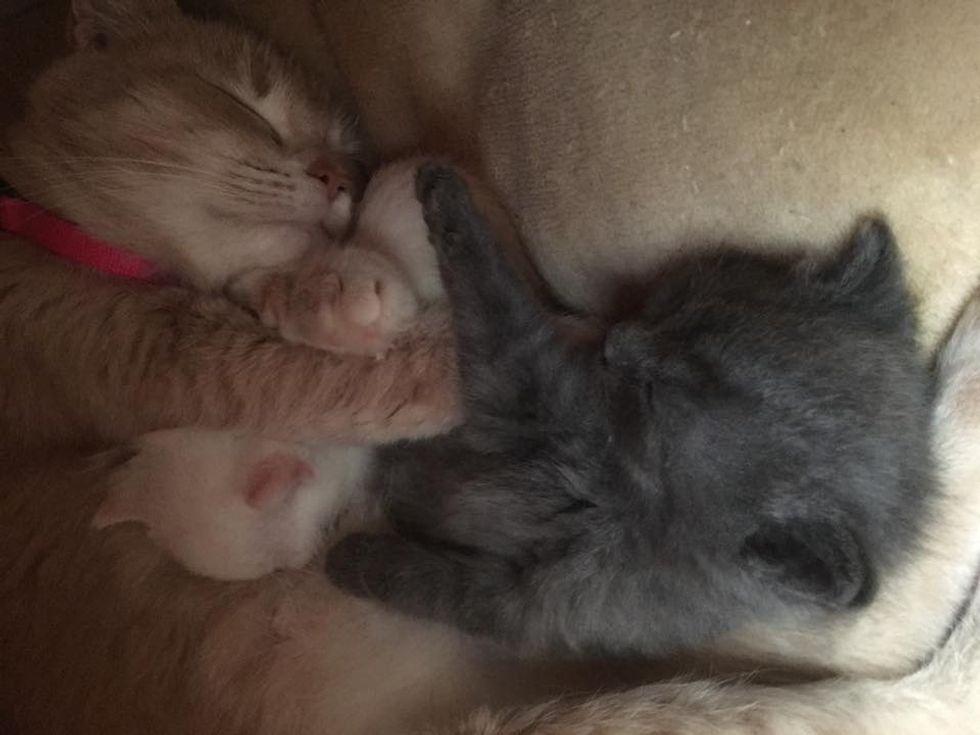 "She knew that Whitey was fragile so she kept him all wrapped up and hugged him all day long, so he stayed warm. She didn't even like to get out of her house to eat because she liked to make sure the kitten was OK and warm," Karen added. 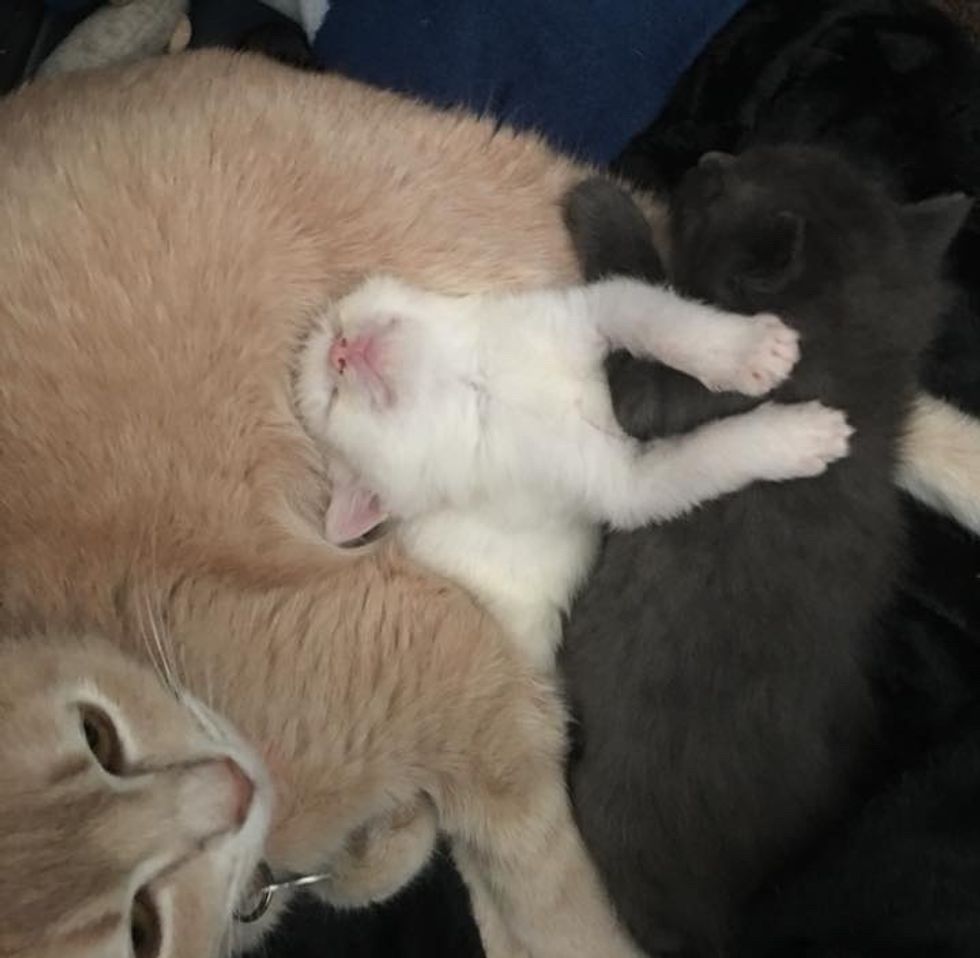 Nubby taught them how to use the litter box and eat solid food.

As they grew, they became more playful and adventurous, but after playing, they would snuggle up to Mama Nubby and fall asleep together. 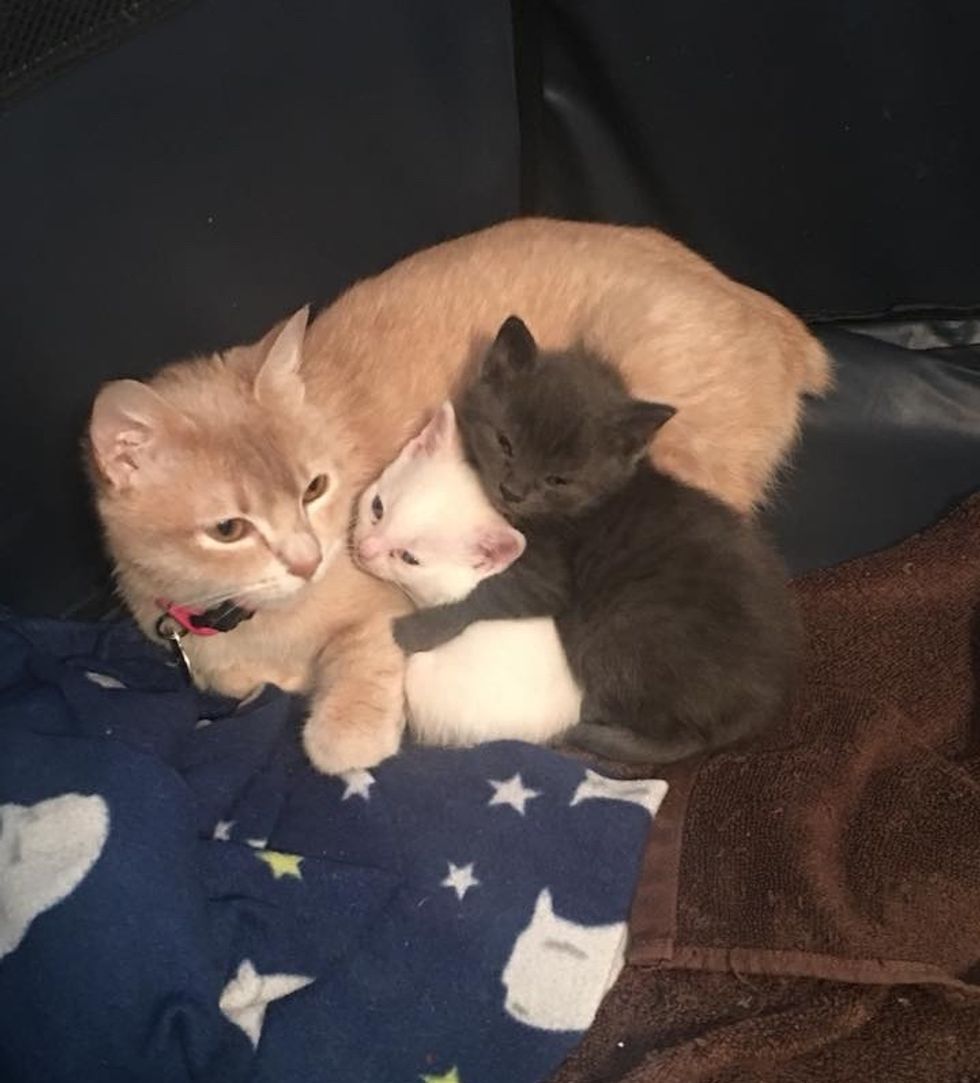 "These kittens saved momma as much as she saved them," Karen said. 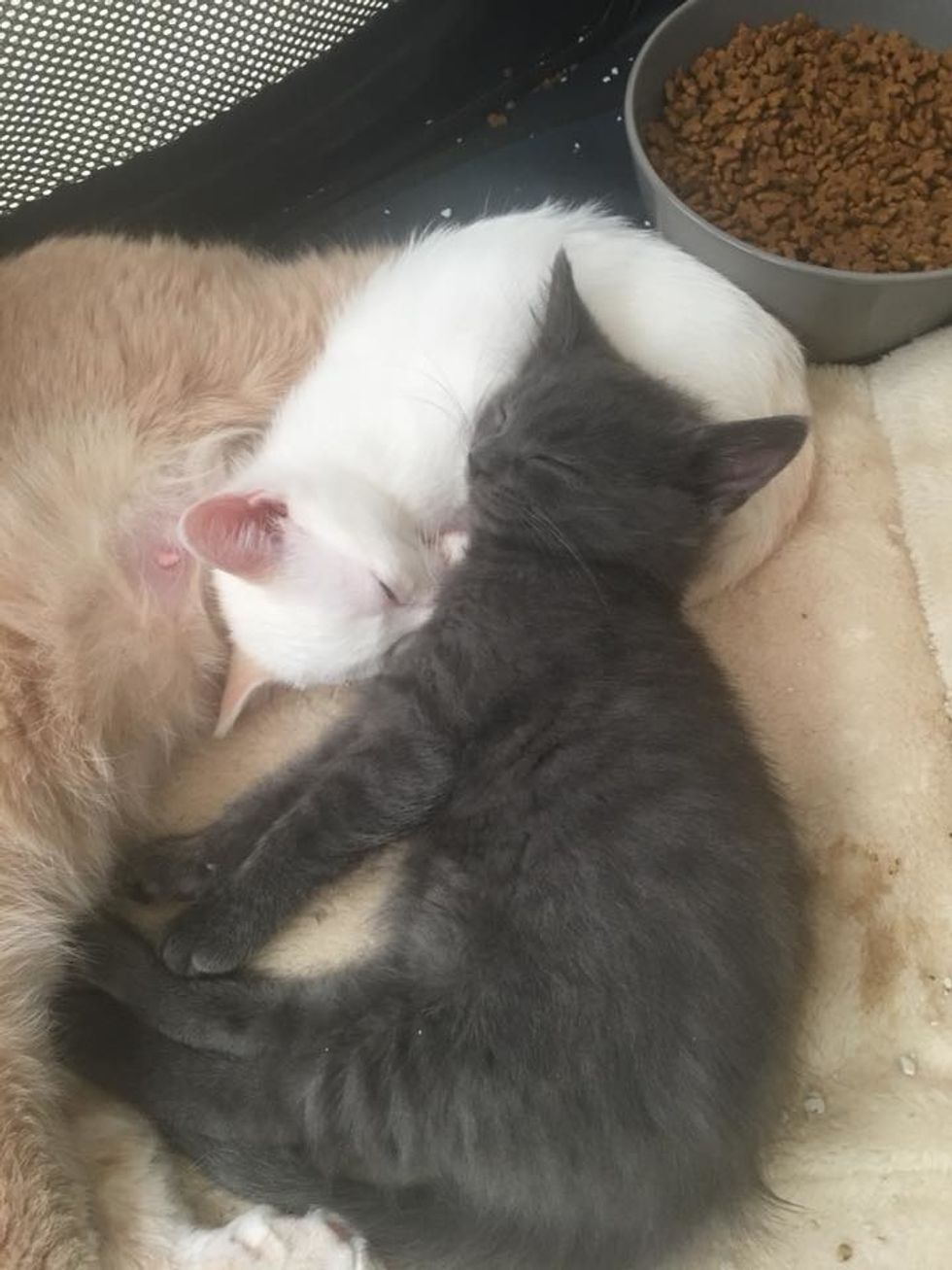 When the two brothers were old enough, they became more independent and spent more time on their own.

Mama's heart was full and she was so proud. It was time for her to be reunited with her family. 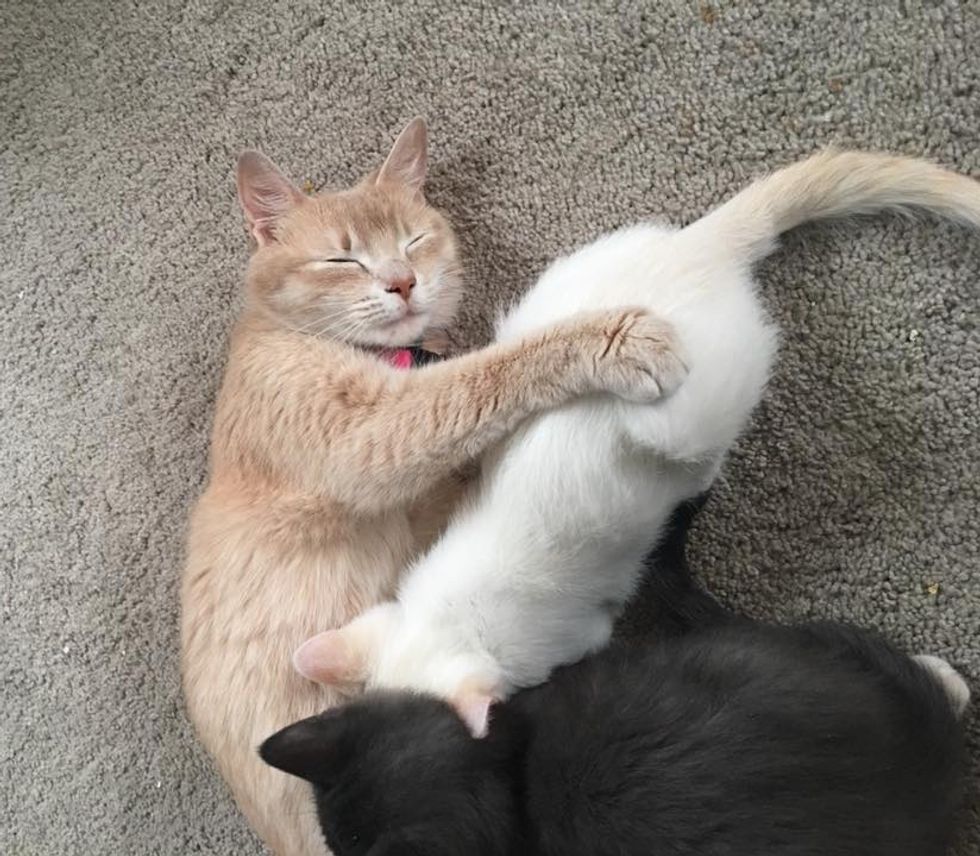 The two kittens became friends with Sr. Walter the resident cat and they welcomed him to join their cuddle sessions. 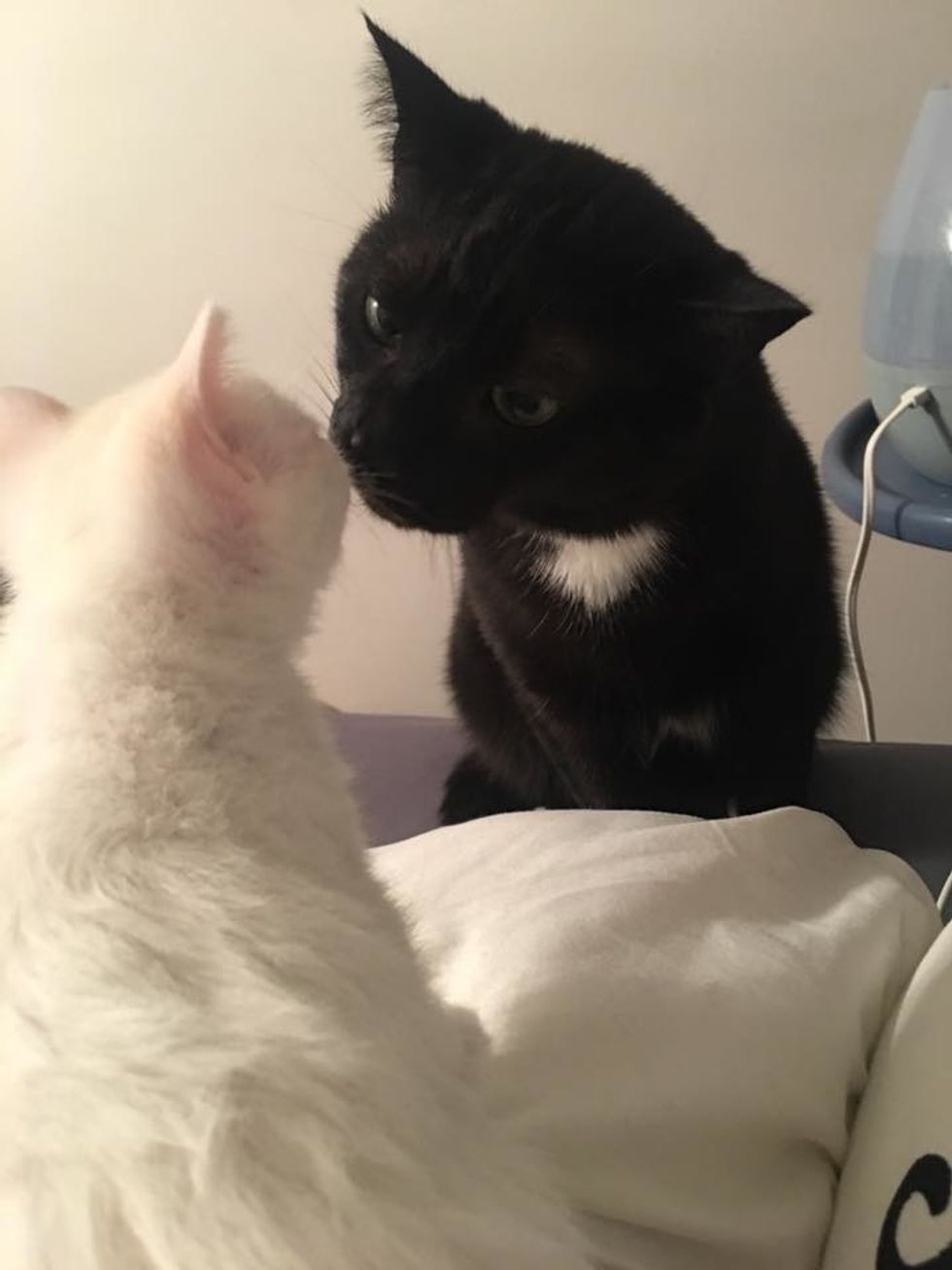 Karen and her husband were planning to find them a forever home, but the kittens had already found it.

They crept their way into their hearts, and the couple couldn't part with them. 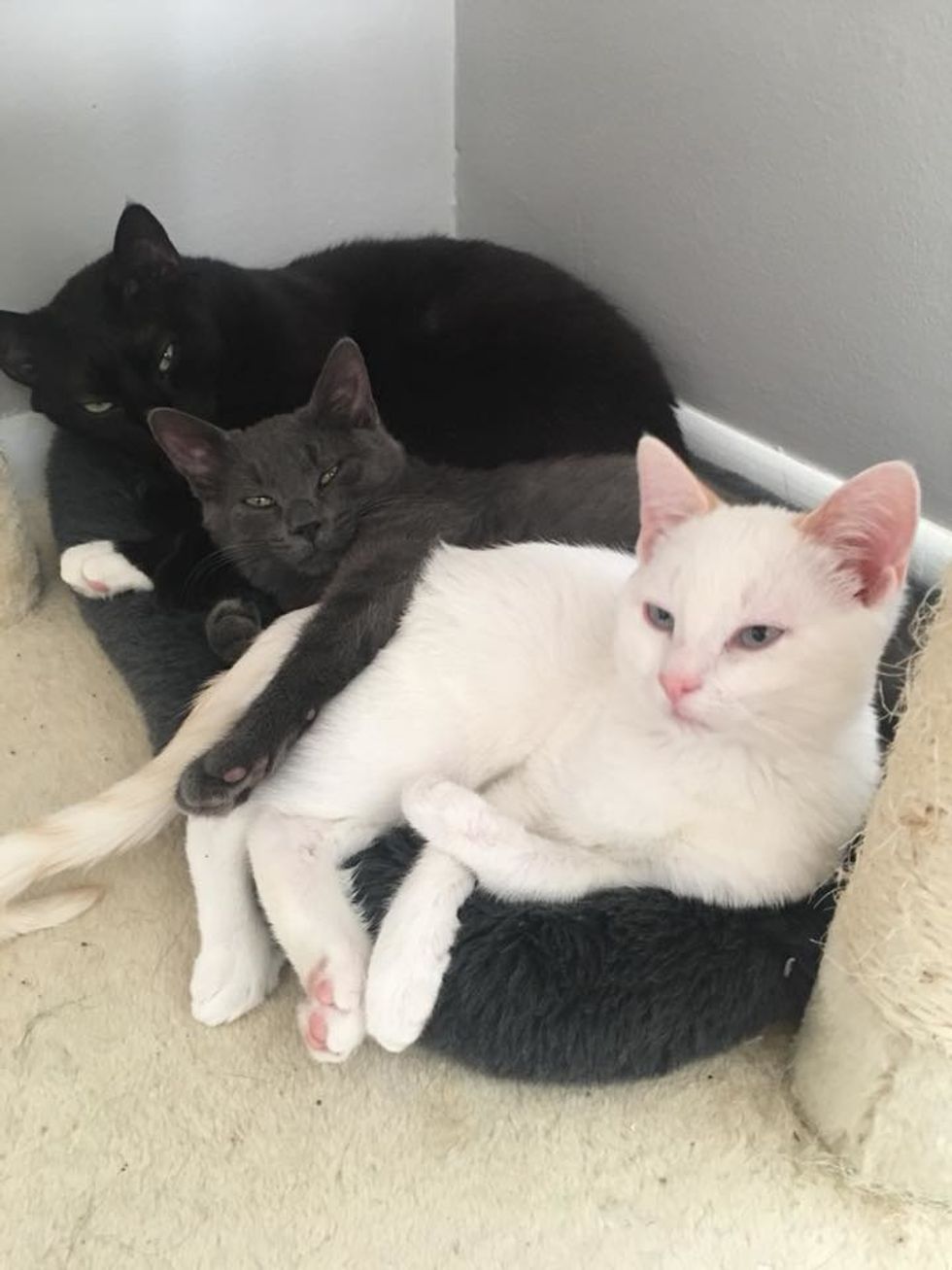 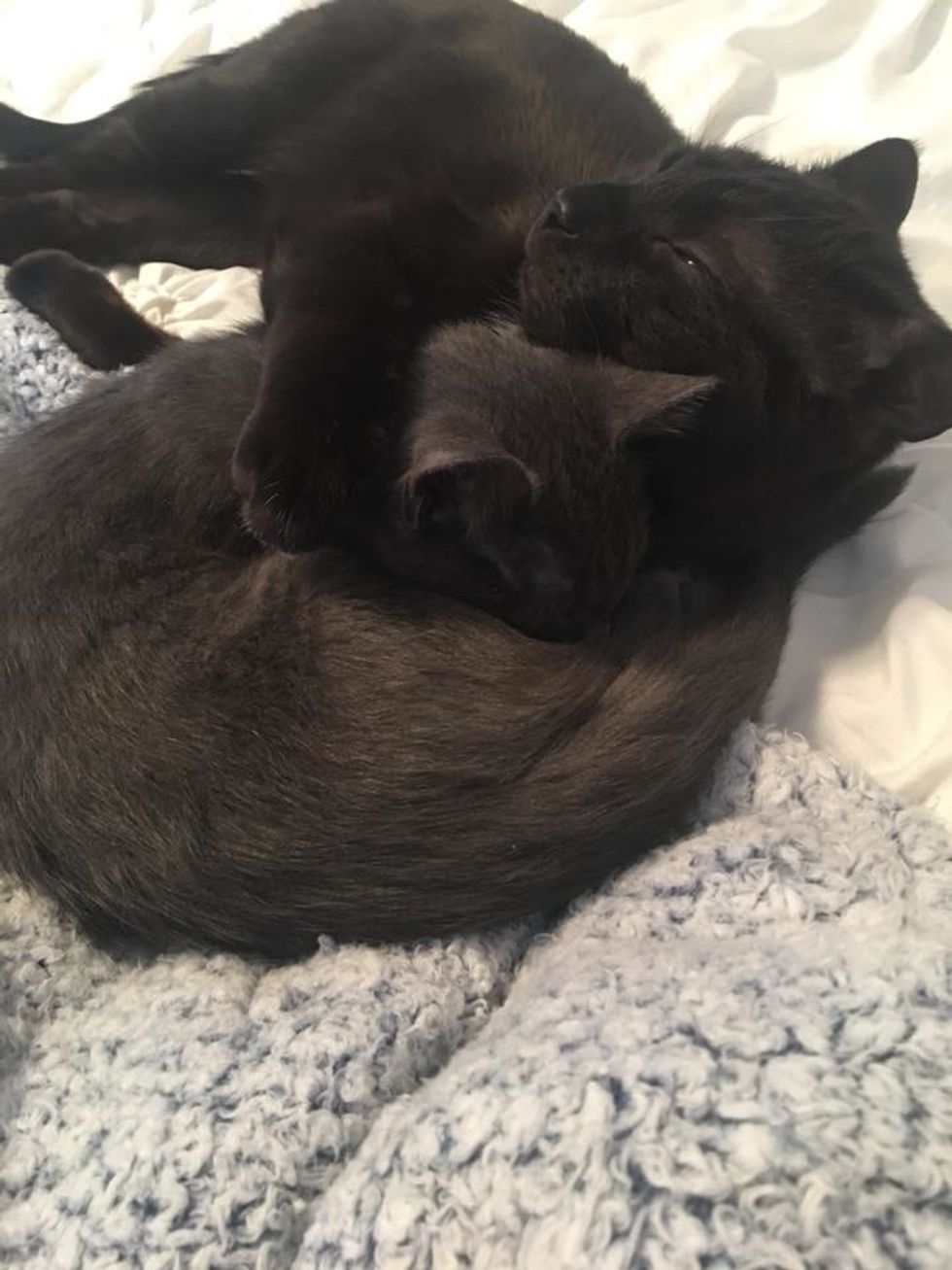 Share this story with your friends. Follow this beautiful feline family on Facebook. If you would like to support their rescue efforts, visit Noah's Ark Rescue Project and Sanctuary and Whiskers of Love Cat Rescue & Sanctuary to see how you can help.

Related story: Kitten Found Abandoned in a Bush Just Hours Old, Has Her Life Turned Around by Loving Couple