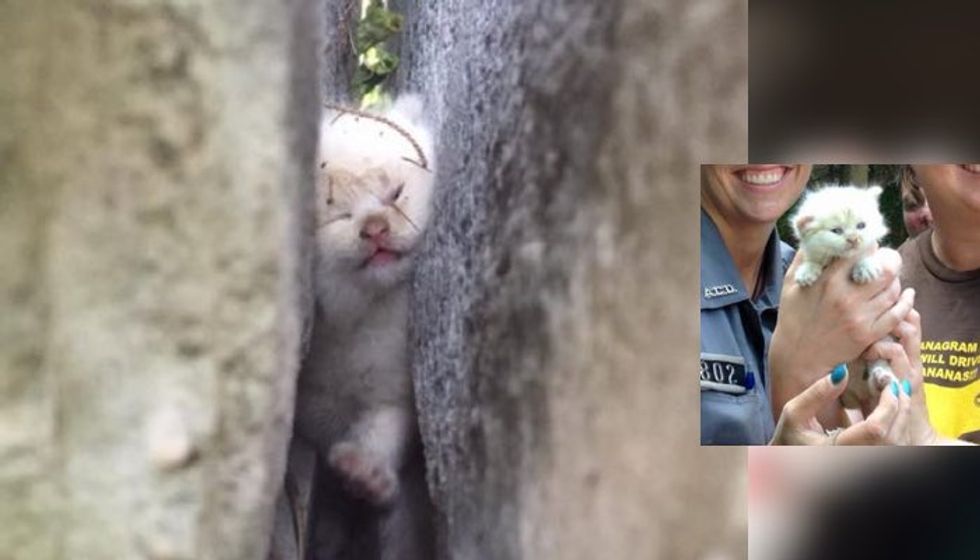 After at least two days being trapped between two large construction boulders, a tiny kitten was freed by the rescuers thanks to the homeowner who was determined to find the kitten.

The cream-colored kitten somehow managed to become wedged in a gap between two large rocks just a few inches apart. When the homeowner from Greenville Avenue in Johnson, Rhode Island heard kitten wails, they adamantly set out to find the source, Patch reported.

When they discovered the kitten pinned between two large rocks, they immediately called for help.

Firefighters and officers from the Johnson Police Animal Control pried the two large boulders apart with the Jaws of Life. The kitten was terrified so they took turns stroking the little furry buddy until the he was freed from the rocks.

"He was quiet when we did that," Officer Erin Medeiros said.

"All the guys tried to figure out the best way to handle the situation and some guys got on one side, others got on the other side, so even if something cracked, we had multiple firefighters holding on," she added.

"He's a little trooper!" They have been calling him Soldier.

The kitten was riddled with fleas and dehydrated, "but we got some fluids right away, gave him a bath, a flea dip, and everything he needed," Medeiros said.

Getting a flea bath!

"What an incredibly hectic but amazing day saved multiple dogs but this kitten known as Stunner which means miracle topped the list! Thank you to JFD and the jaws of life in helping me save him also thank you Julie Ring for taking him no questions asked," Medeiros added via Facebook.

What a stunner! He's doing very well now in his foster home.

Updates: the kitty has been adopted!!!

"Soldier AKA Jaws is comfy and Happy in his new home with Firefighter Anthony Rainone."