Kitten from the Street Finds Family Cat to Hold onto, and Determined to Win Him Over

A kitten was determined to win over the heart of a family cat, after he was rescued from life on the street. 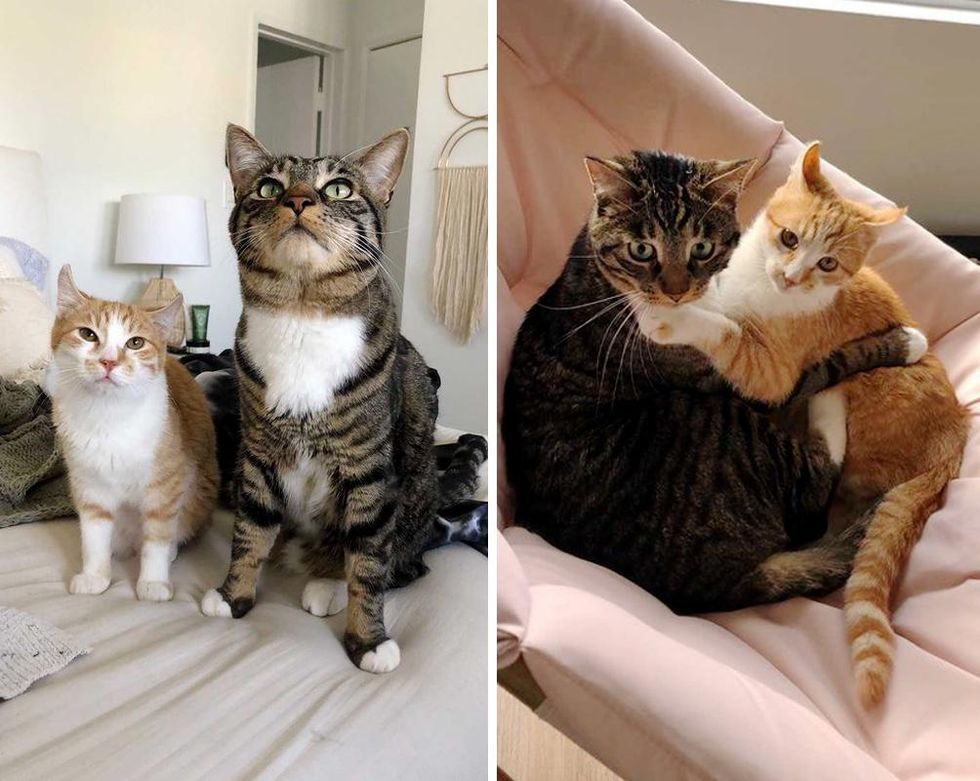 A 5-month-old orange kitten was found roaming the streets of Los Angeles, along with a few other cats. Friends for Life Rescue Network sprang into action and brought them to safety.

Allie Malin came across a post from the rescue, seeking volunteers to foster the cats. "I immediately applied to become a foster, and I was approved and sent a picture of this adorable orange cat with curled ears."

She picked up the kitten the next day and was instantly smitten with the little guy. The tabby named Lyric was a love-bug from the start and quickly settled into his new abode, as if he'd been there all his life.

It didn't take long for the kitty to notice that there was another cat at the residence. 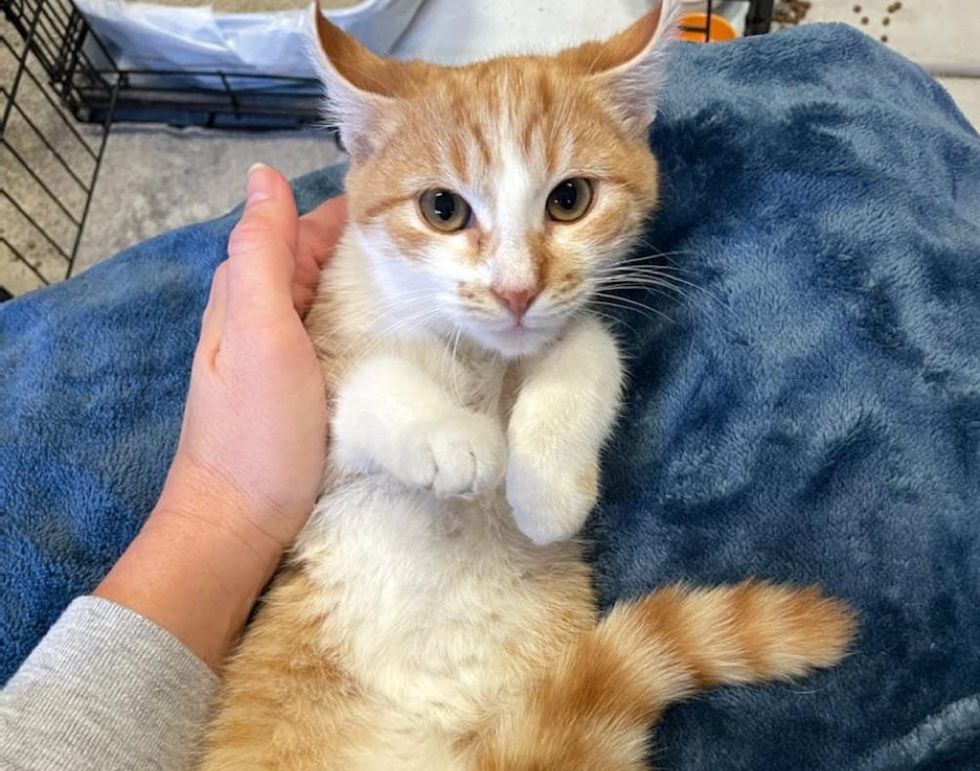 Lyric could smell the scent of another feline through the gap underneath the door and started meowing enthusiastically. Allie's resident cat Marley heard the cries and came to investigate. He was curious but alert, trying to figure out who was making all the ruckus.

Once the door was opened, the orange tabby walked right up to Marley and insisted on a meet-and-greet. Marley wasn't so sure about this over-zealous kitten at first, and turned away to maintain some personal space. 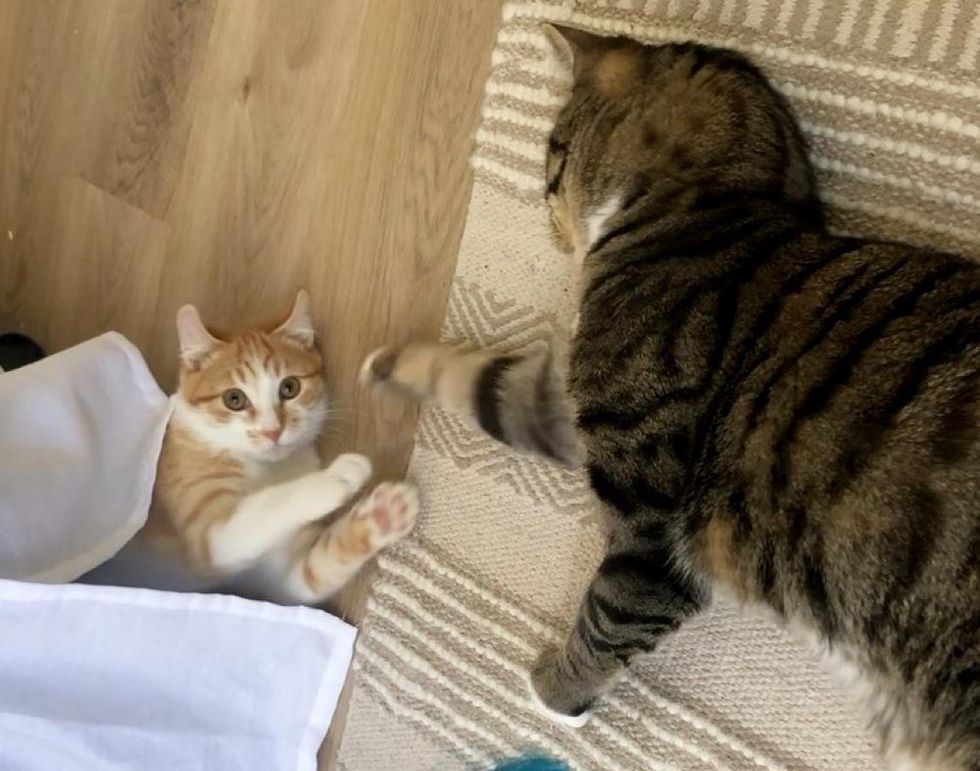 He was hesitant about sharing his home with another feline roommate, but Lyric was persistent and wouldn't take no for an answer.

The playful, rambunctious ginger boy followed Marley everywhere around the house. He would echo Marley every time he made a sound, mimic his every move, entertain him with his silliness and even wrap his tail around him for a hug. 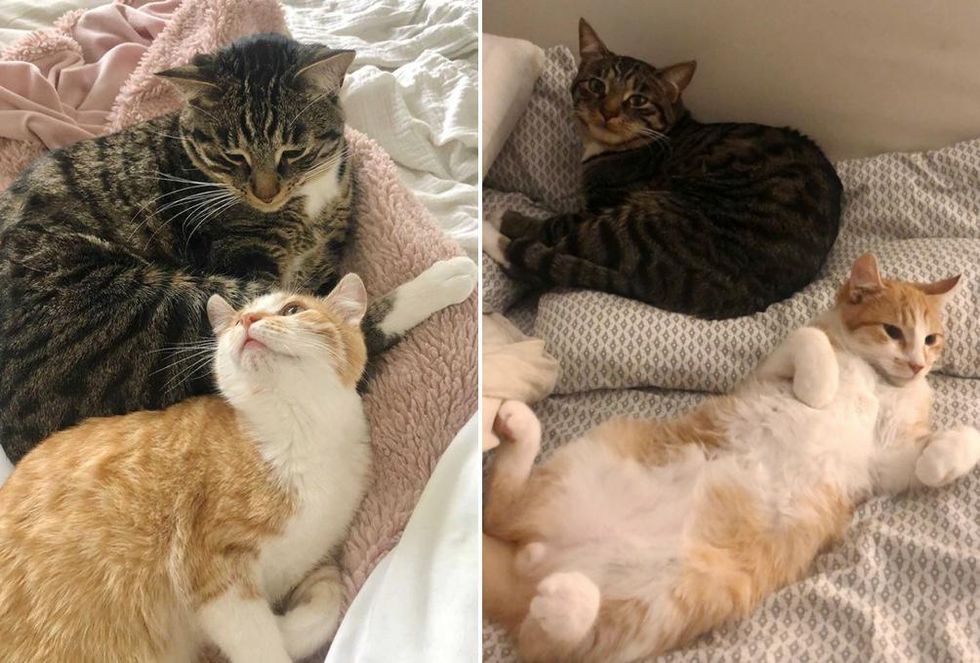 The kitten wanted to be a part of everything Marley was doing, and would squeeze in next to him to force a cuddle. Marley began to tolerate the kitten who had no concept of privacy or boundary. Before he knew it, the kitten started growing on him.

"When I watched him cuddle with Marley for the first time after only two days of knowing each other, I knew he would stay with us forever," Allie told Love Meow. "They bonded so quickly it seemed meant to be and I realized I needed to adopt him." 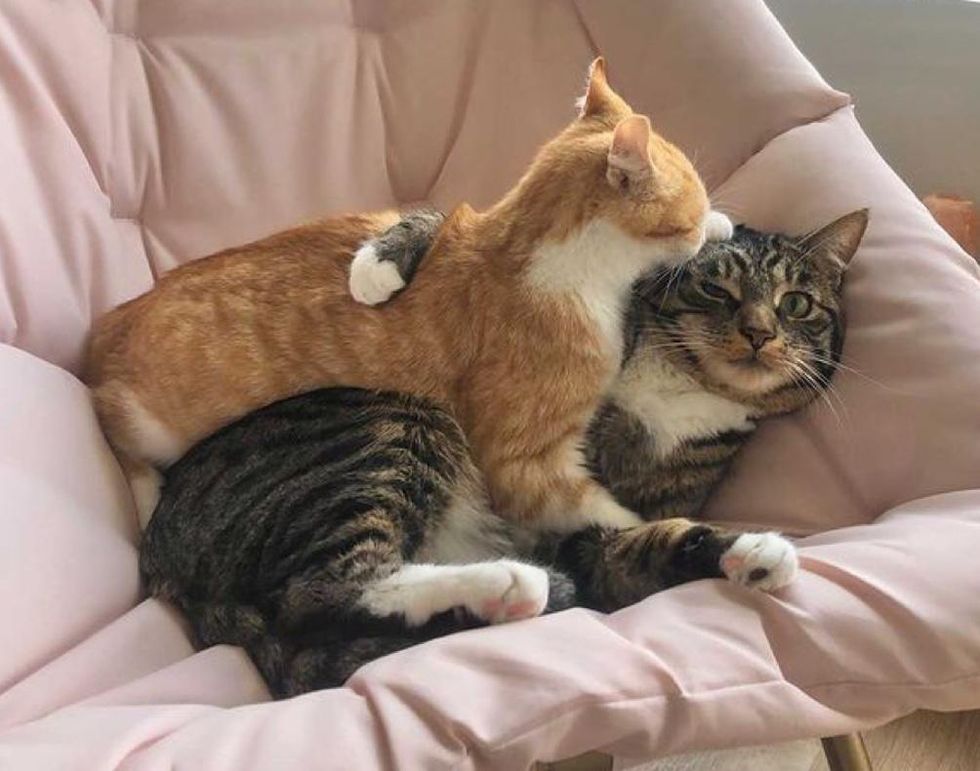 The orange tabby (now renamed Pumpkin) officially became a permanent part of the family, and Marley's most loyal sidekick. He continued to tag along with his bestie and show him how to play like a kitten again.

"Pumpkin is wild, hilarious and cuddly. One second he is running around and playing like crazy, and the next, he is purring and cuddling like a sweetheart," Allie said. 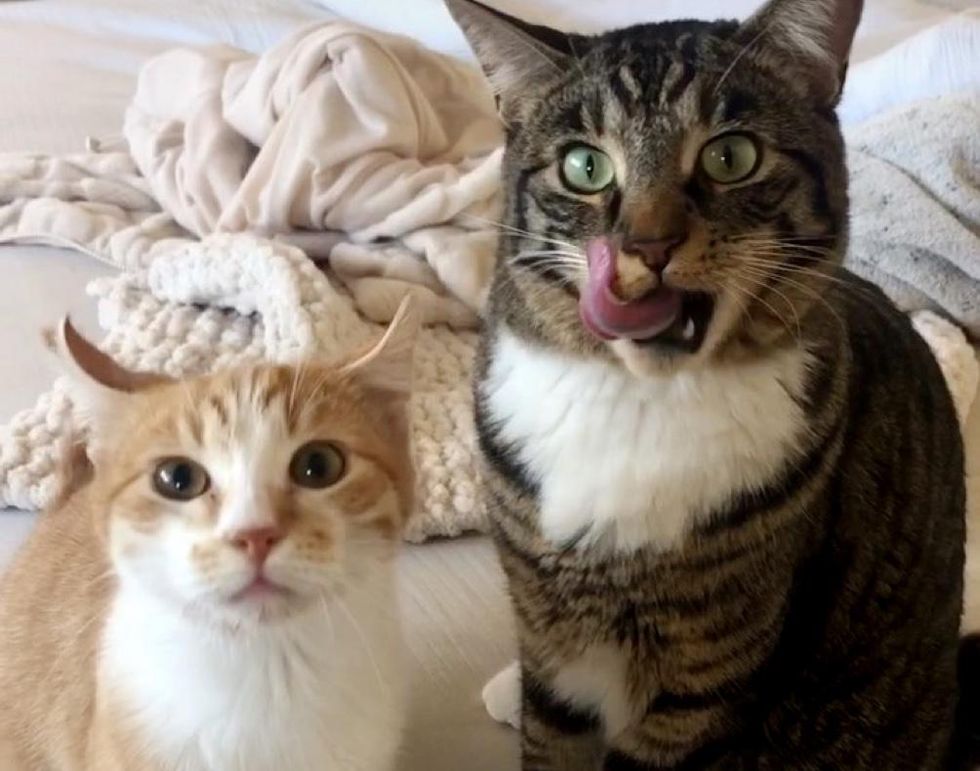 Their bond has really blossomed in just two weeks — they do everything together and are always within each other's eyesight.

"They love play fighting and chasing each other around. They play peek-a-boo around corners and get into trouble together. They love plotting together to get into their treat bags and going through the trash," Allie shared with Love Meow. 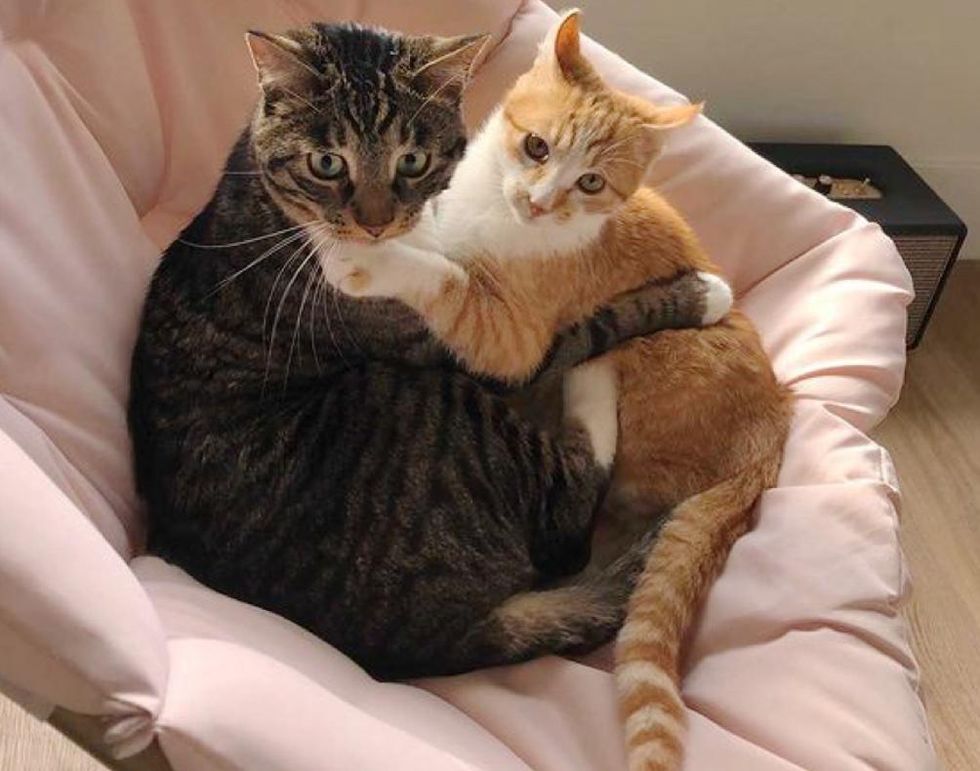 Now, Allie has two kitties to wake her up every morning, and sing the cutest duet in the kitchen for breakfast.

Pumpkin's larger-than-life personality is rubbing off on his big brother. 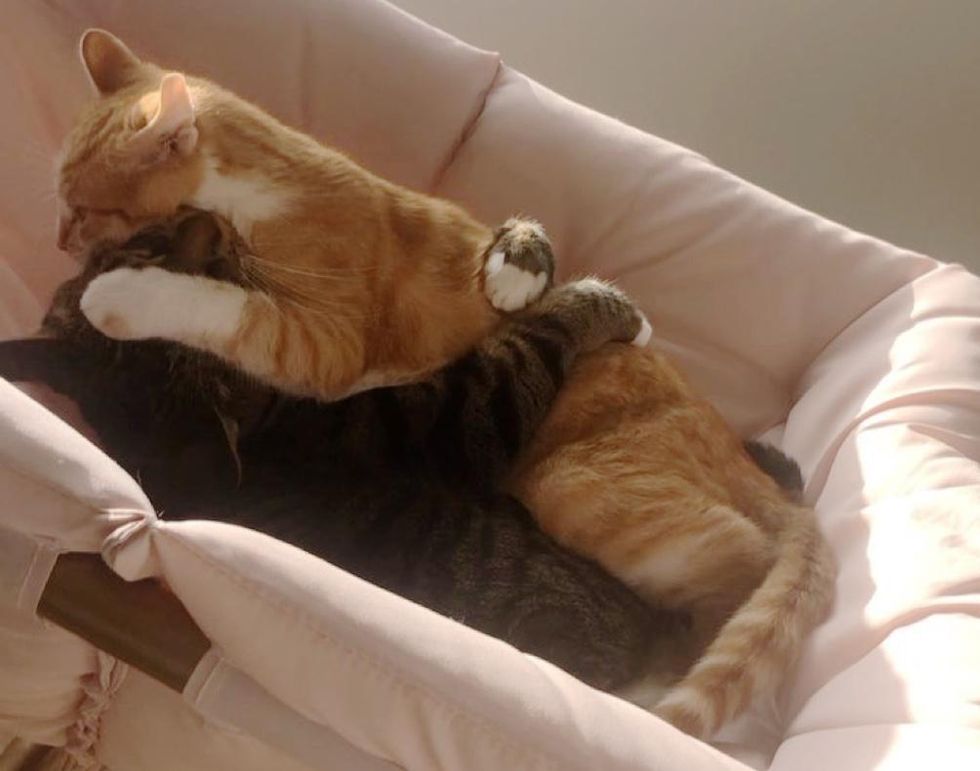 "Marley tries his best to keep up with Pumpkin's kitten energy. When they're done playing, they love cuddling and cleaning each other." 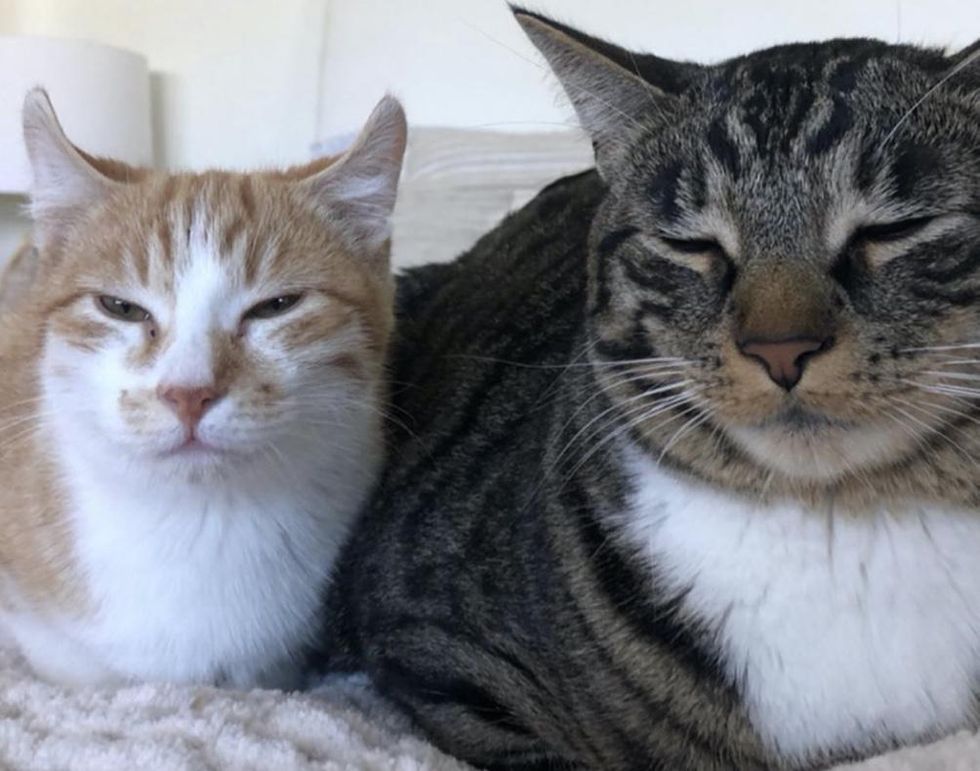 They fight and wrestle but they always make up and cuddle. The two best friends have become an inseparable pair in a short period of time.

Pumpkin adores his big brother, following him around like his shadow. 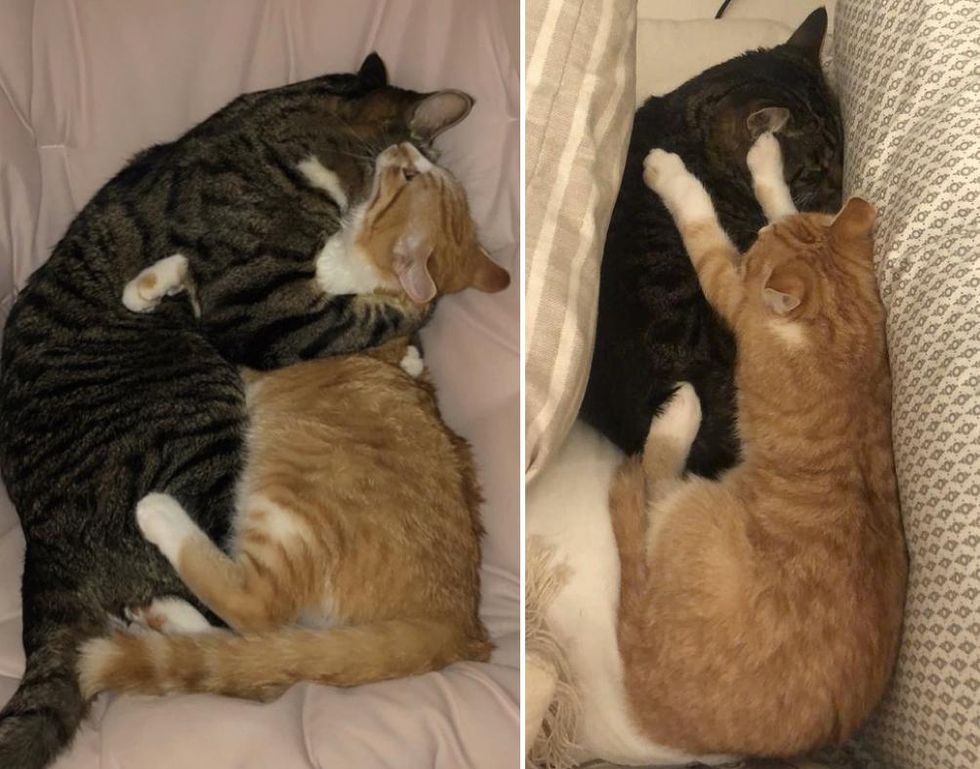 The former street cat is loving his VIP life with his partner in mischief. Together, they are filling their home with constant joy and laughter. 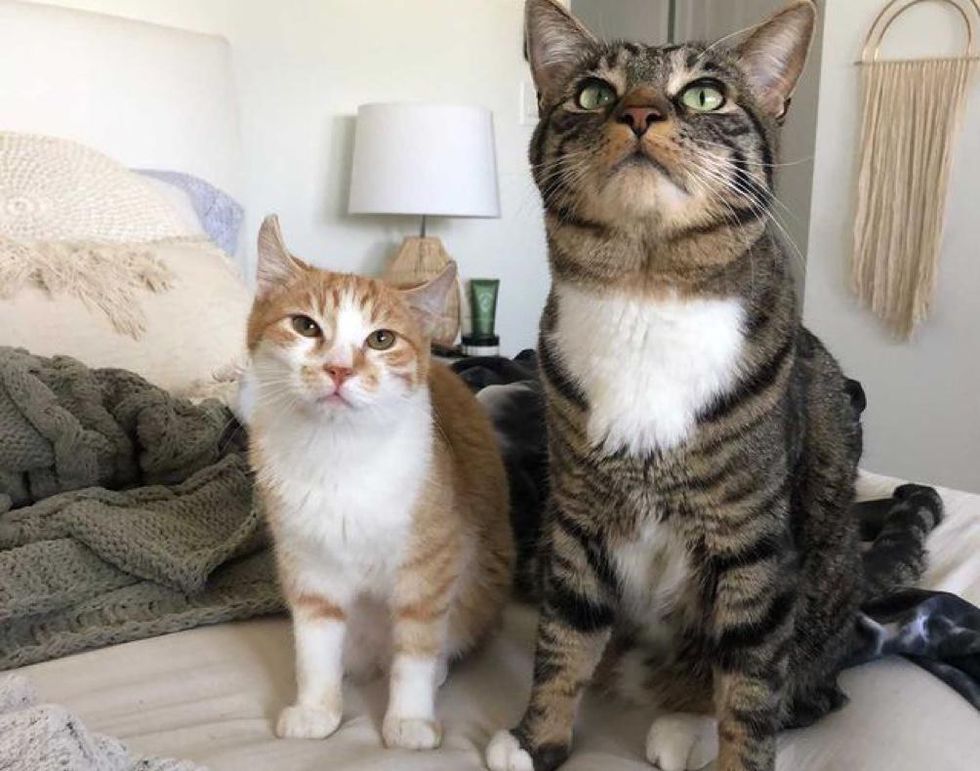