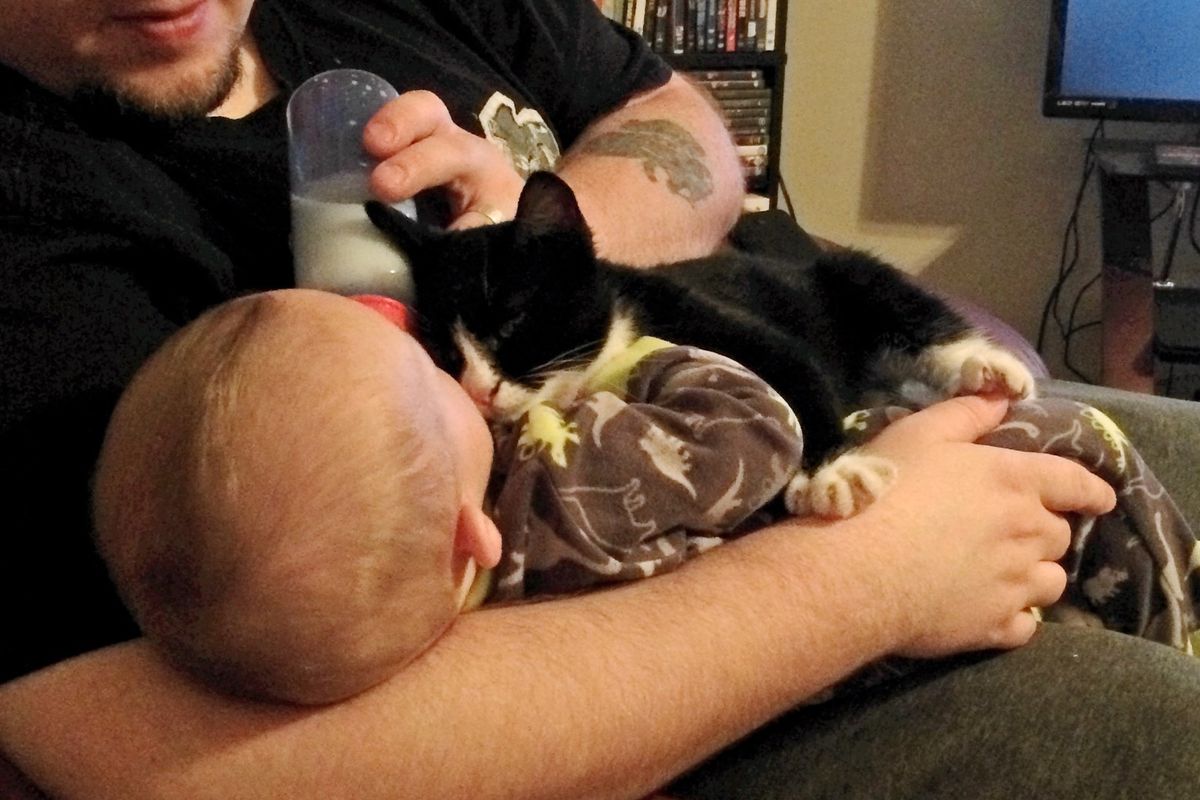 Matt Davis spotted a sad little kitten crying under the porch at daycare. As soon as he walked up to him, the kitty came out from hiding and started following him around. 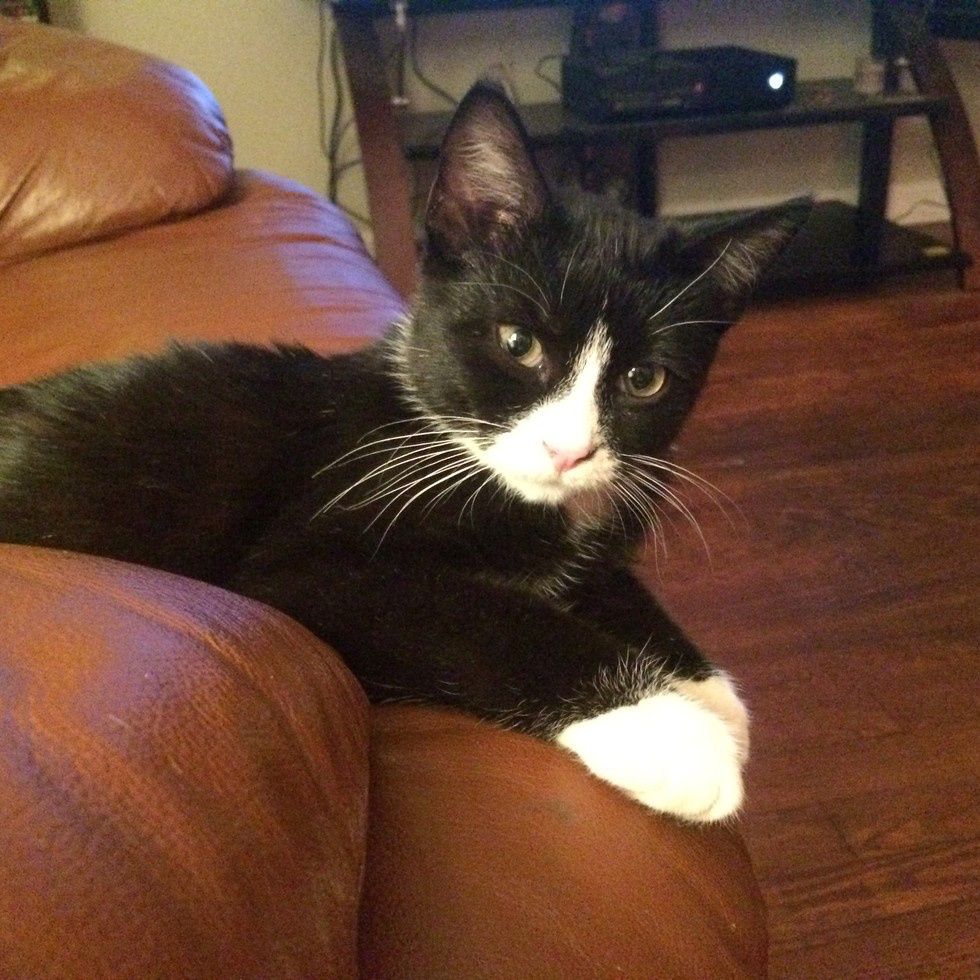 "My husband found Doug while dropping our daughter at daycare. It was pouring raining that day and the kitten had taken refuge under the covered porch," Jessica Davis told Love Meow. "Doug immediately followed my husband (Matt) back to the car."

The kitten was discovered all alone. When he found Matt, he became imprinted on him, tagging along with him wherever he went. The tuxedo wanted to go home with his human friend, so Matt scooped him up and took him home.

"He said he was so pathetic and skinny, he couldn't just leave him." 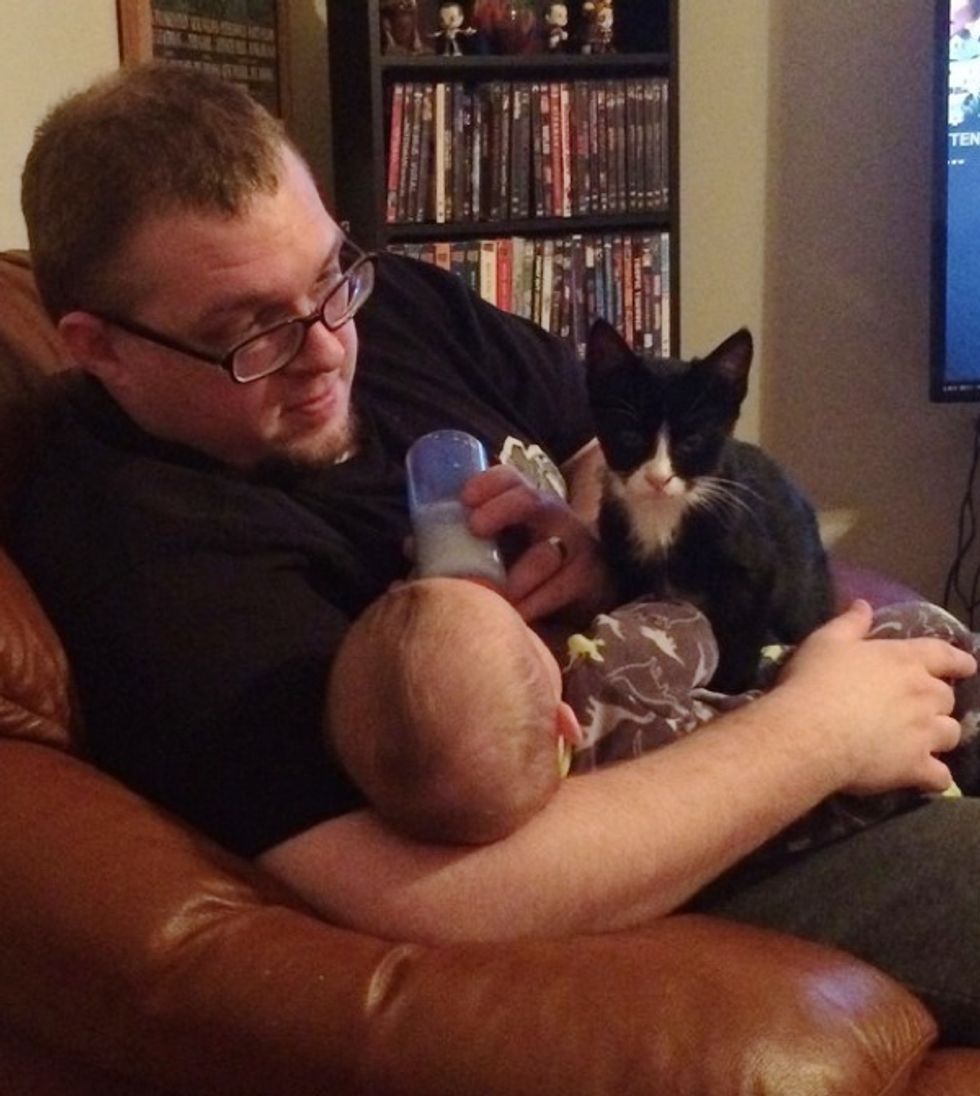 The little buddy was very hungry as if he hadn't eaten for a while. After a bath, a big meal, and lots of cuddles, he perked up and cuddled up to his humans for a long nap. "We were intending to find his possible home. After asking around the neighborhood it became apparent that he didn't live in the area," Jessica told Love Meow.

After a trip to the vet, the 12-week-old kitten got a clean bill of health. Not only did he fit right into his new home, but he became quite attached to their tiniest person in the family. 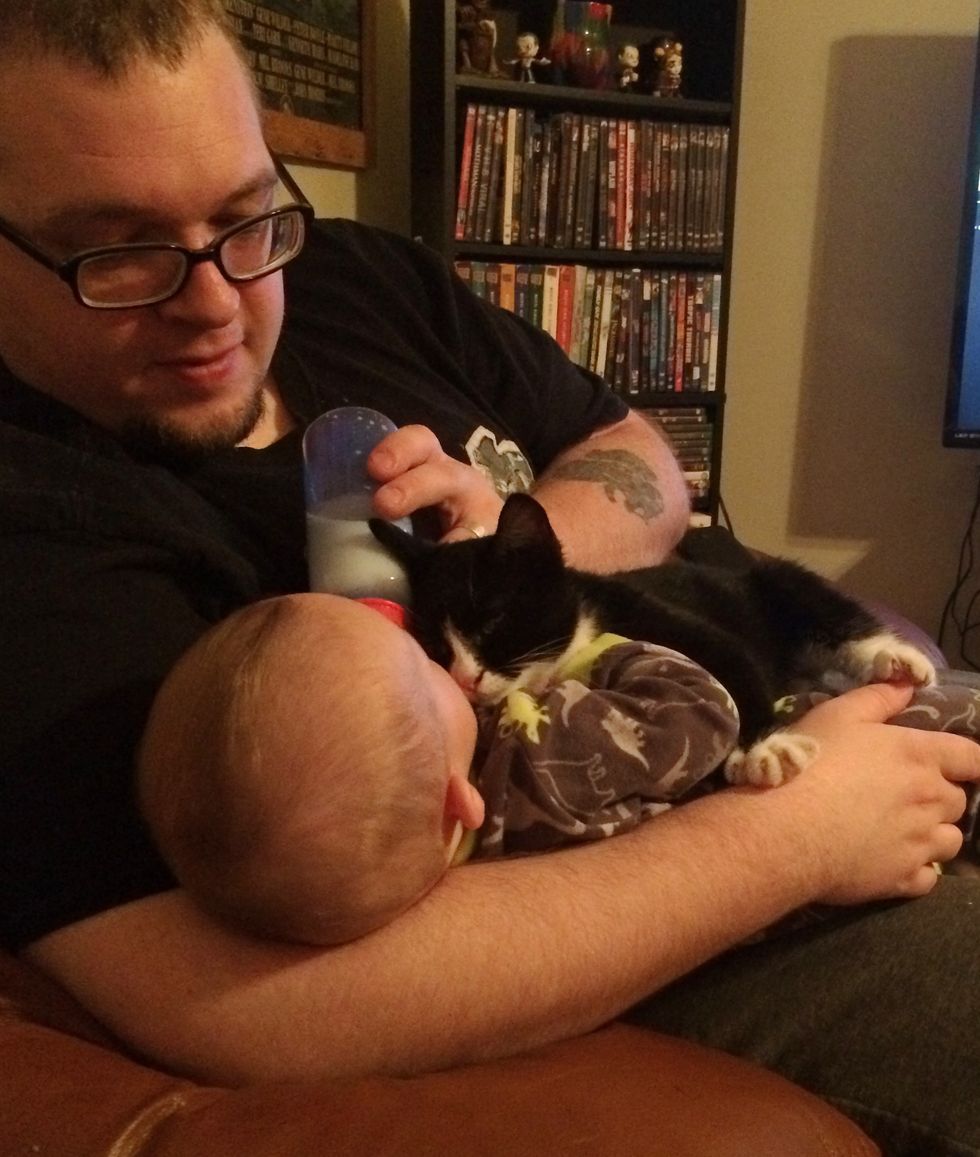 When Matt sat down to give his son Rowan a bottle, Doug decided that he would "help".

"My son Rowan was eating and Doug came right up and made biscuits on him and laid down. Rowan stroked his ears. They were very gentle with each other," Jessica told Love Meow.


The two little buddies bonded instantly and have since become inseparable friends. 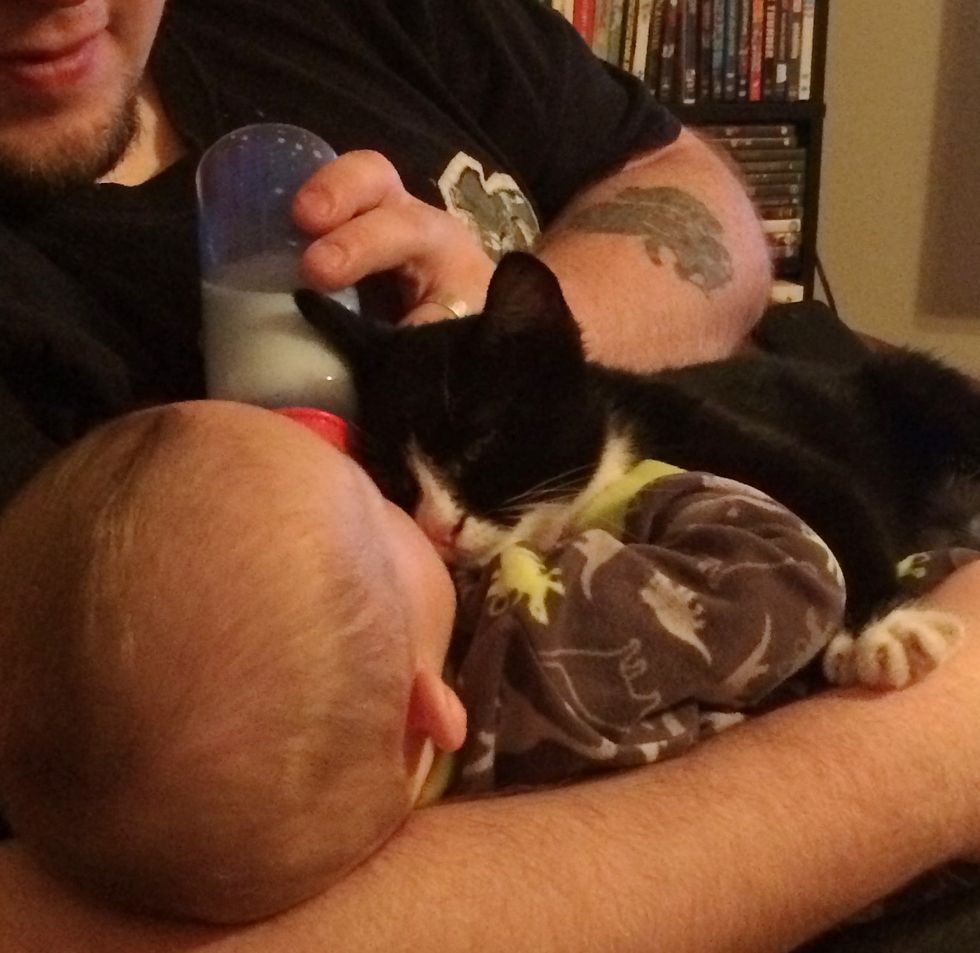 "He watches him while he eats, plays with him during tummy time and, meows when he cries. It's adorable," Jessica said.

"Doug has become an instant part of our family, purring and curling up on us. Now he follows us around the house, sleeps on my head and purrs."

They gave the tuxedo a forever loving home, and now he is guarding and protecting their little boy for life! 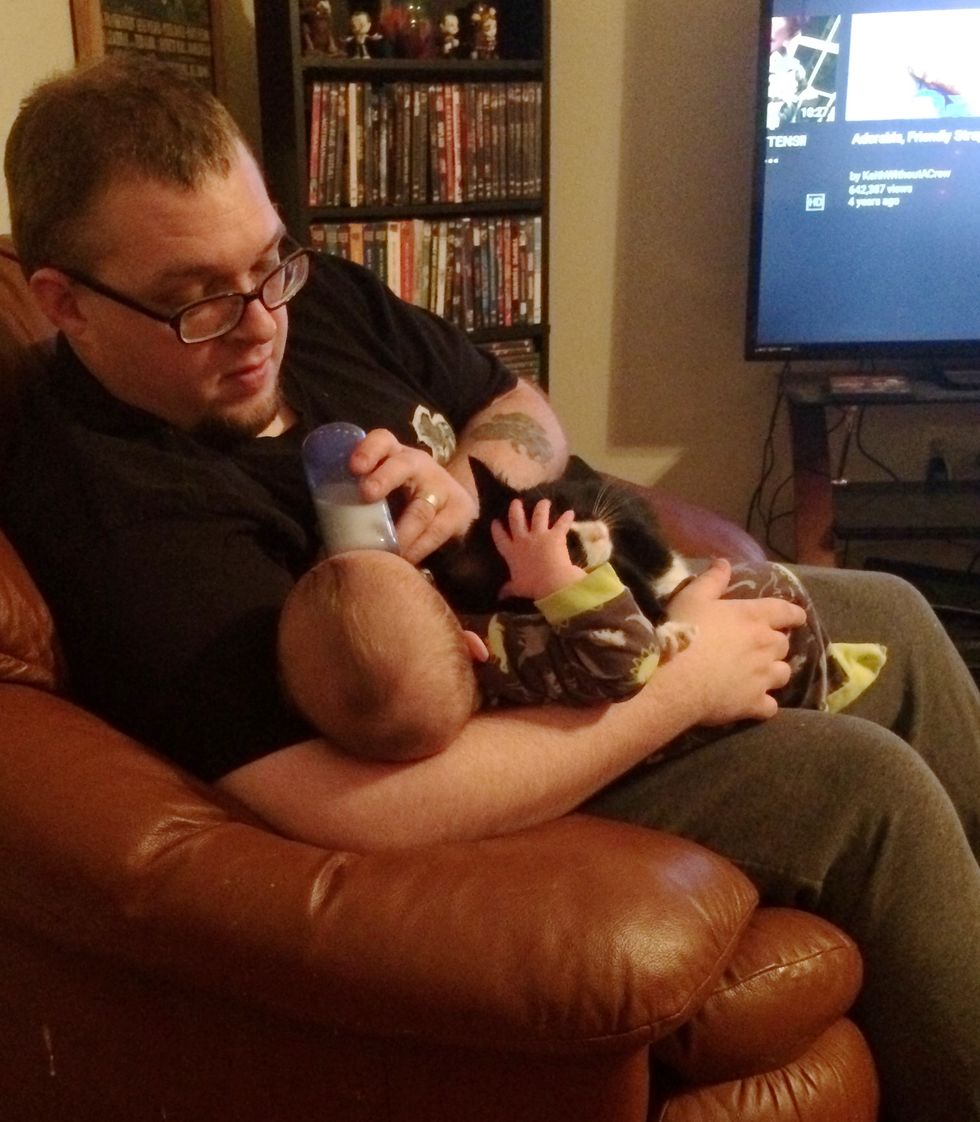 Related story: Cat Kept Baby Safe for 9 Months inside the Belly and Now Does the Same Outside