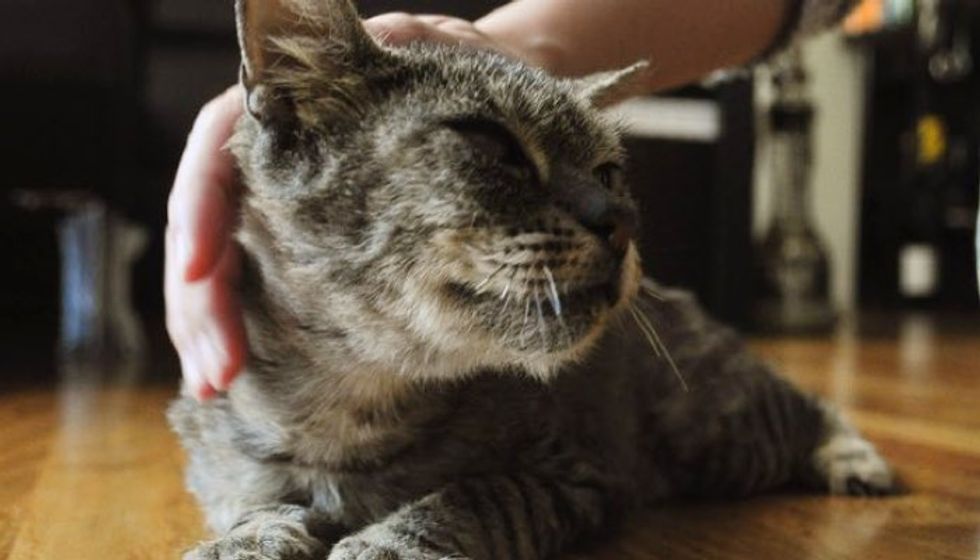 Mr. Cat - The Incredible Rescue Journey and Recovery of a Blind Cat

This is an incredible rescue journey and recovery of Mr. Cat who was once blind but now can see again.

It has been nearly a month since they discovered Mr. Cat. "We gave Mr. Cat the opportunity to live and thrive as the kitten that he should have been. This is Mr. Cat's story and we would like to share it with the world," reddit user darkkon wrote via imgur.

"While heading to my car, my colleague and I discovered a small furry thing plopped on the grass near where I worked. When we went up to inspect it, we discovered that it was an emaciated, blind, and dying kitten, much less than a year old. We were able to coax it to slowly get up and walk a few meters where it stopped. My colleague brought a can of cat food and fed it a portion while gently petting it's skeleton-like frame."

"We initially did not want to bring in the cat because we had two indoor cats of our own. We also did not know what kind of disease, parasites, and other pests the cat may have," they wrote.

"Although we knew the cat was likely feral, he seem to understand we were trying to help him. His fear of us waned and he began acting as if we were his guardians. "

"Despite the risks, we created an outdoor shelter made of cardboard to keep it from the cold. Some more food and water, and the cat seemed to be thankful."

"After discussing it with my partner, we decided to bring him in. A level 10 containment field was setup in our bathroom and a force field was established in the shower."

They took the cat to the vet the next day. "The cat was in very poor health and severely underweight, but we knew surrendering him to the shelter would only result in him being euthanized," they wrote. "There were many problems with the him besides the obvious malnutrition, fleas, and dehydration. A severe scabie and mite infestation made him vulnerable to bacterial infection and as a result his eyes were infected and sealed. There were also skin infections caused by lacerations probably from other animals."

With support from Reddit and hitbox, they were able to raise fund to cover his major care and bring in the supplies needed to keep him comfortable.

"As time passed on, we knew Mr. Cat was getting healthier. The parasites were dying and he was gaining weight. However, one major thing we wanted to overcome was his blindness," they added. "Lesions and scabs continue to fall off as we aggressively treat the scrabie and mite infestation on Mr. Cat."

"Nearly three weeks after we discovered Mr. Cat, we did something we would have never imagined when we first got him: We actually touched his fur and gave Mr. Cat a belly rub!" they wrote. "After a final cleaning and haircut, Mr. Cat was beginning to look more and more like a playful, happy kitten. He will be forever blind in his right-eye but with luck, Mr. Cat has full vision on his left-eye. 'One is better than none'..."

"We took Mr. Cat out to our living room for the first time. A few sardines to get him acquainted outside of the quarantine zone seems to work rather well."

"Mr. Cat has so strongly associated safety with his box that we created a second vacation home for him outside of the ward. He immediately walks in and makes himself comfortable."

"Mr. Cat has come a long way, but rehabilitation will be key in getting him comfortable with his new guardians. He may have recovered physically to an extent, but he deserves the kitten-hood that was taken away from him."

"Mr. Cat shows his affection and gratitude for a little head scratching. At this point we know that he's happy and comfortable in his new environment."

"Mr. Cat will always have guardians to watch him now, until he grows and lives a long and happy life."