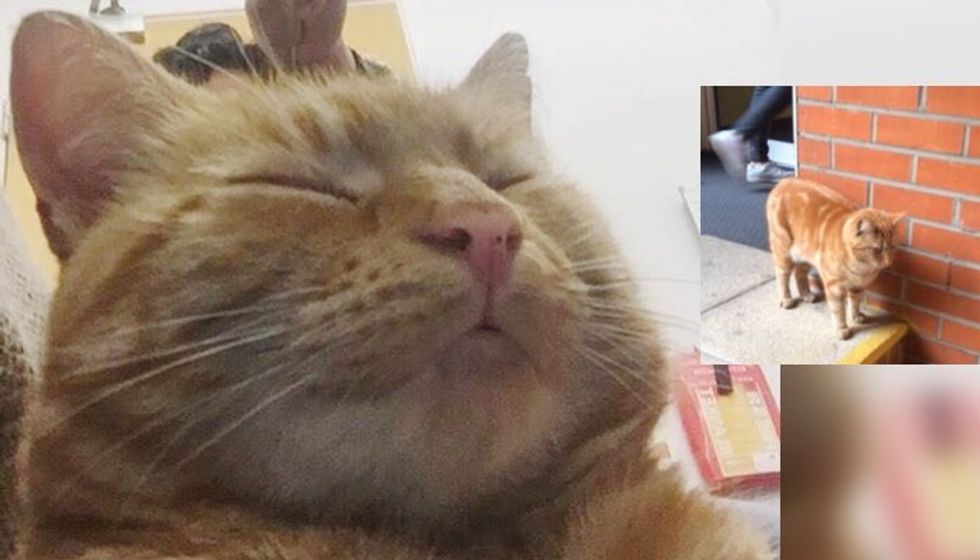 A mysterious ginger cat has moved into the student halls at King's College London at Stamford Street since the end of October. No one knows where he came from, but one thing they know for sure, this ginger feline loves his rent-free new home.

Just like Bubba the cat, this 4-legged furry friend also has a penchant for school. Students have been speculating the true identity of this friendly ginger cat.

He was first discovered by Andy Ab Butler and Chloe Fasel, Stamford Street residents at KCL. They named him Nando's after the restaurant where the cat was found outside.

They shared the story with the Tab: "We first met Nando's about 2 weeks ago when we were walking home, outside of Nando's - hence the name.

"It was raining and he looked scared and wet so we petted him and he took a liking to us. He followed us to Stamford Street and we decided to give him some food and dry him off. He then stayed with us and loved it."

"We decided to return him to Nando's as we thought he could be someone's pet, but later that evening we heard him again in the courtyard and found that he had returned.

"We fed him again and he just kinda stuck. He now goes from block to block just getting food from students and seems to like it. People have made him beds and even bought cat food.

"Nando’s is the most amazing cat. Friendly and loving, he just wants to be around people and thoroughly enjoys the attention he gets." they added.

The students love having their feline buddy around and are keeping cardboard boxes just for him.

"At night he plonked himself in my flatmates bed without waiting for permission which was pretty cute," Melissa told the Tab.

Nando's the newest resident at Stamford Street is loving all the love and attention from all the students. In return, he brightens up their day with a lot of snuggles, purrs and endless supply of cute.