A little hungry 1-week-old kitten was found outside alone, crying nonstop. She was scrawny and very feisty. 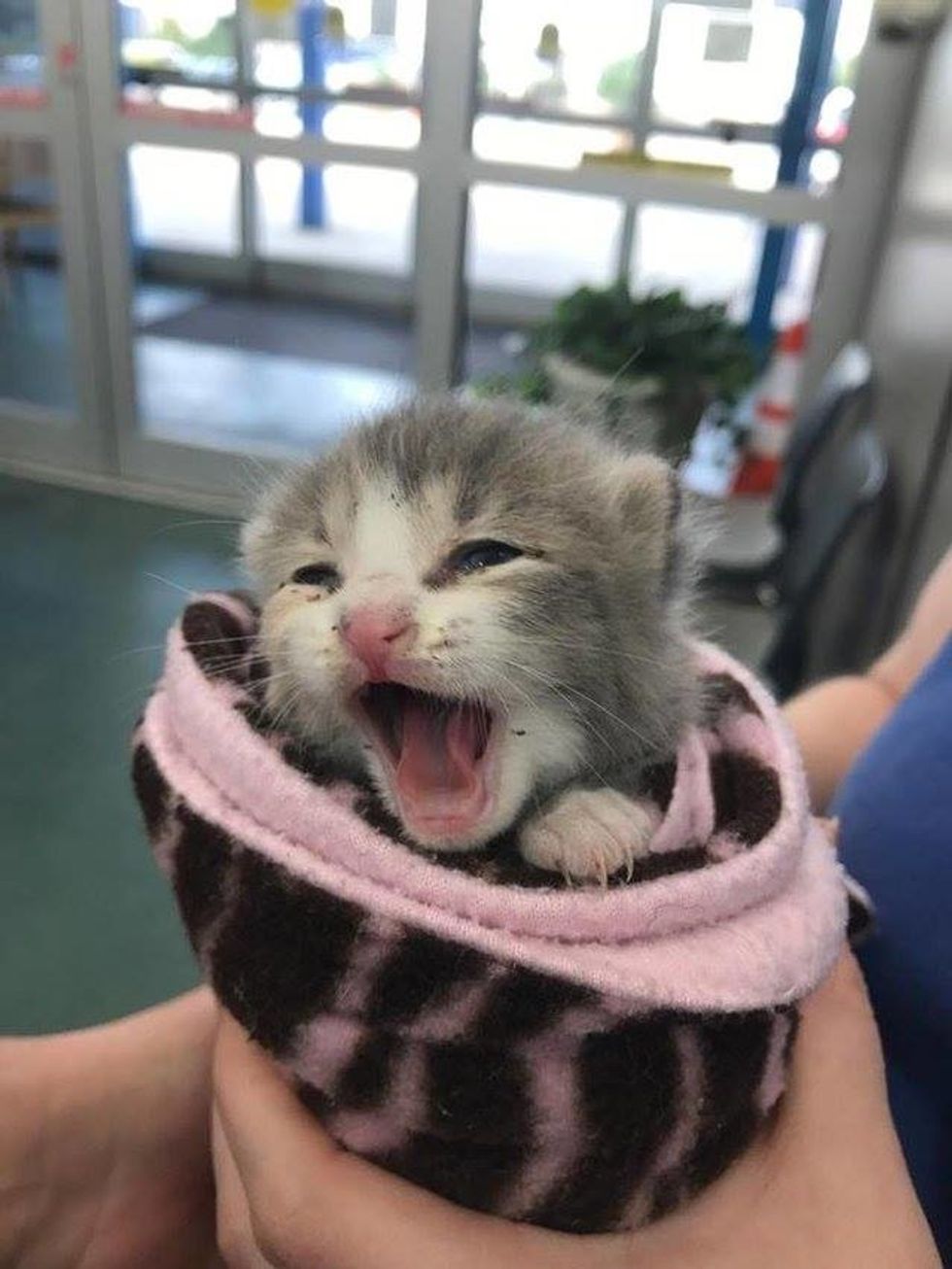 When the kitten arrived at Dallas Animal Services, she needed a lot of help. Gabi Vannini, foster mom, took the kitten into her care. While trying to wash off all the fleas, Nebula threw a tantrum, trying to fight to get out of the bath.

Gabi knew that the kitten would do much better with a nursing mom and thought about her rescue dog, Pirate. "Nebula was very pushy and loud and I had a crazy thought that she might be able to fit in with Pirate's puppies," Gabi shared with Love Meow.

She placed the kitten in the nursery pen, and immediately Pirate took to the little feline baby and started caring for her. "She was happy to accept a new baby, and the puppies seemed to think their new littermate was perfectly normal." 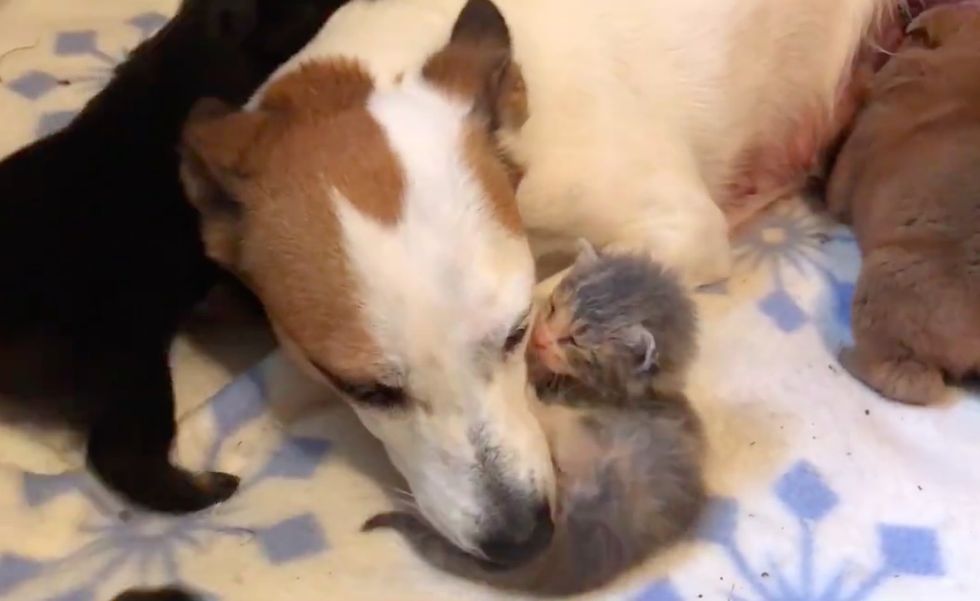 They were worried that the kitten might have trouble nursing alongside the puppies because they were much bigger, but the little feisty kitty surprised them by pushing the puppies out of the way to nurse.

Nebula was thrilled to have a nursing mama that she could latch on. 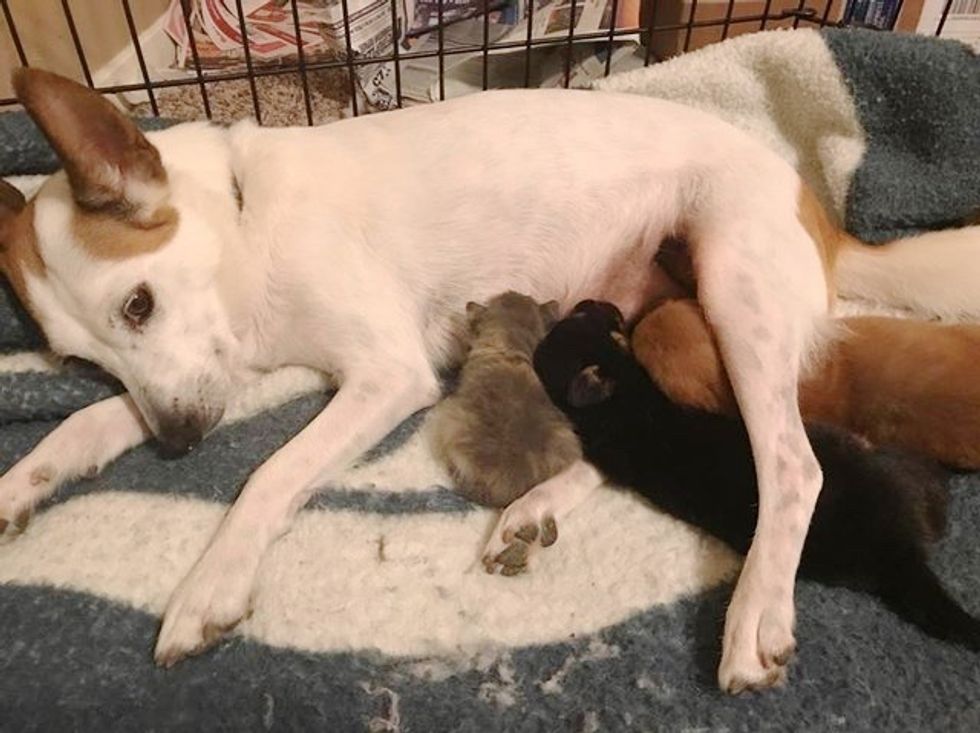 Gabi supplemented with some KMR to make sure the kitten had enough food and nutrients.

The puppies were very sweet and gentle with their feline sister. As they grew bigger, Nebula began to think she was part pup.

"She seemed extremely happy to have some 'littermates' to snuggle up with and Pirate was happy to care for her weird noisy puppy," Gabi said.

Watch Nebula and her surrogate mama in this adorable video:

Nebula was thriving with a mother's care.

When Gabi tried to introduce her to other foster kittens, Nebula wouldn't stop crying until they put her back with mama Pirate and the puppies. 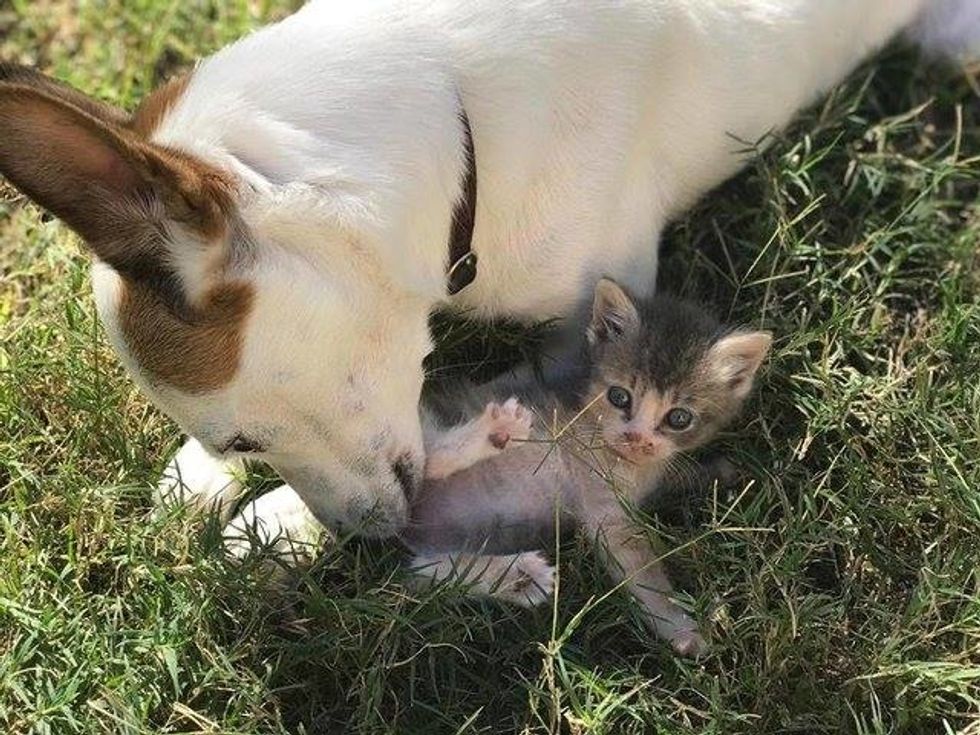 Pirate is very nurturing to animals in need and has helped foster numerous pups and kittens. When Gabi brought home a little calico, she immediately offered to mother her.

Nebula and another orphaned kitten nursing together.

Nebula has grown by leaps and bounds.

"She is about four months old now and still thinks she can nurse," Gabi told Love Meow. 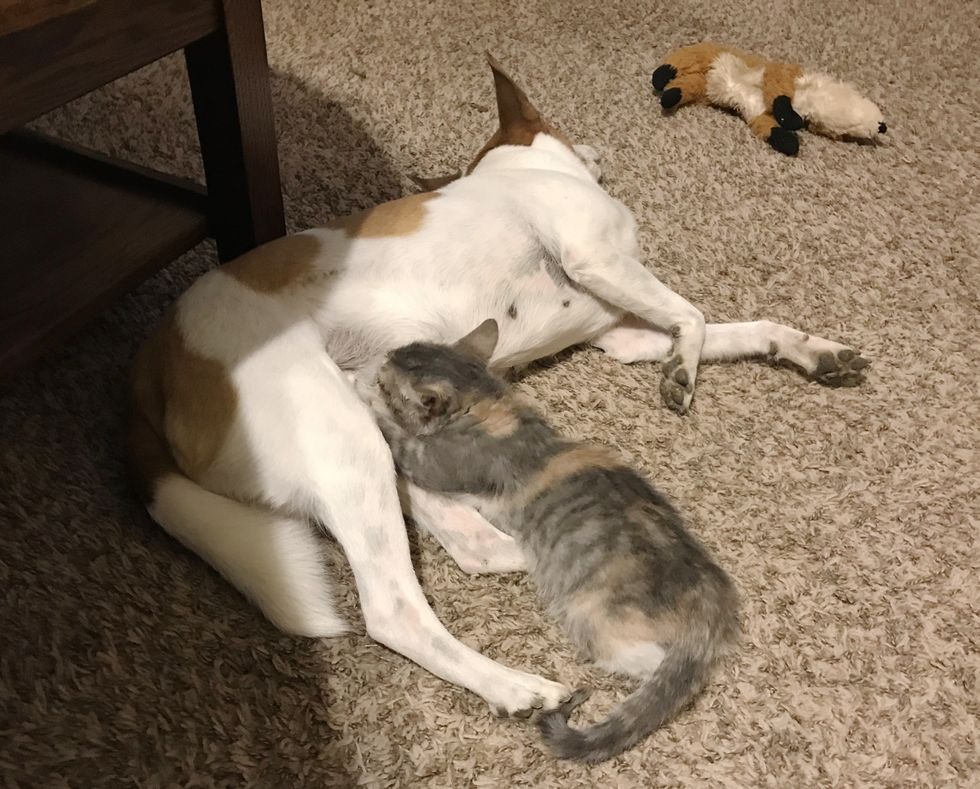 They wanted to find her a home with dogs, and that's when one of Gabi's friends offered to adopt her.

"She will be getting adopted by a friend of mine who has dogs, whose elderly cat recently passed away." 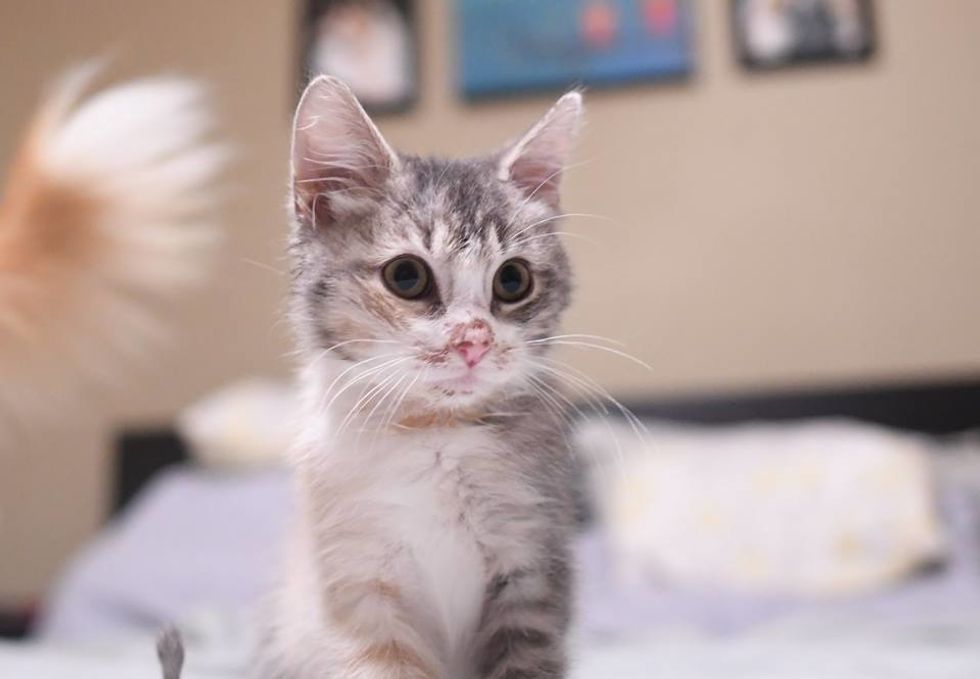 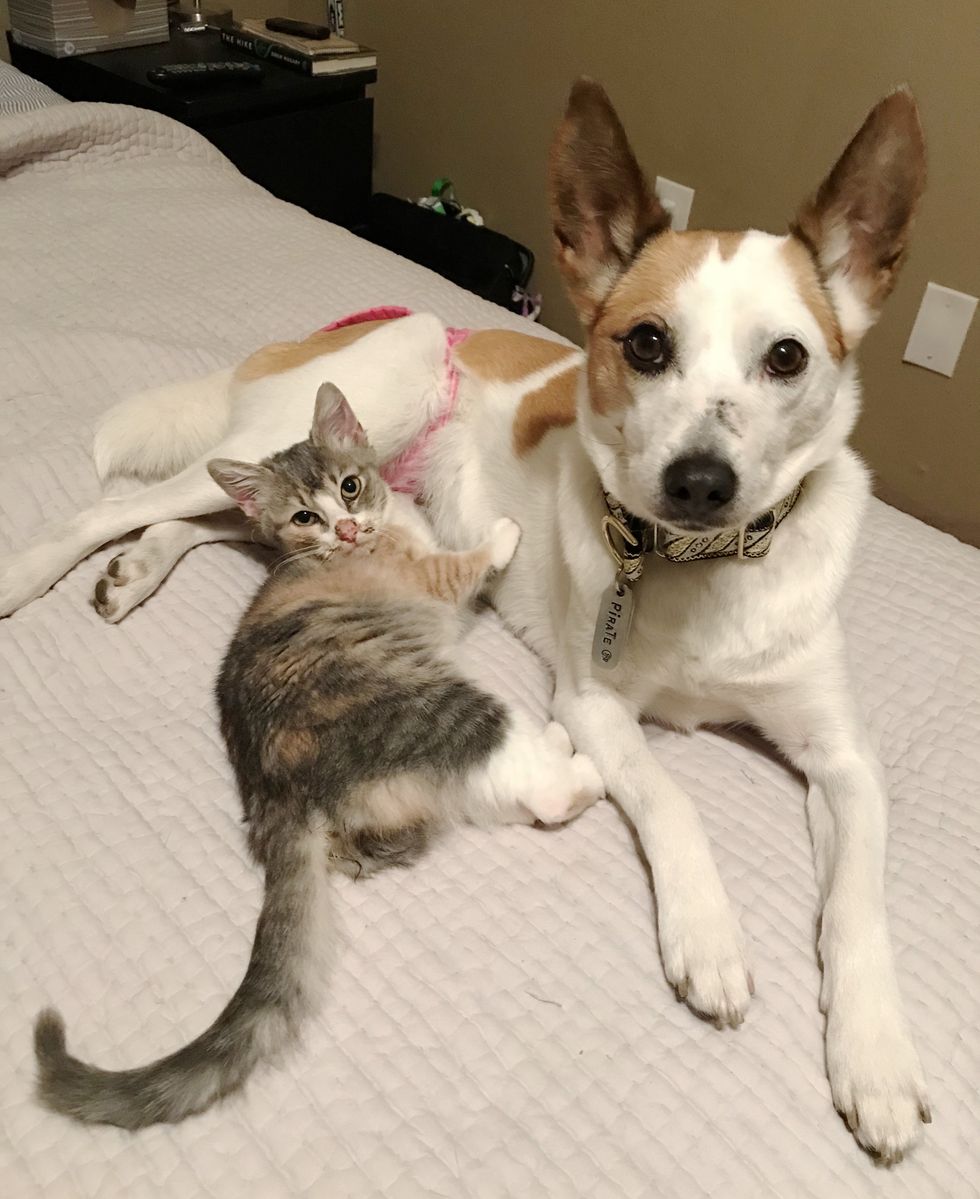