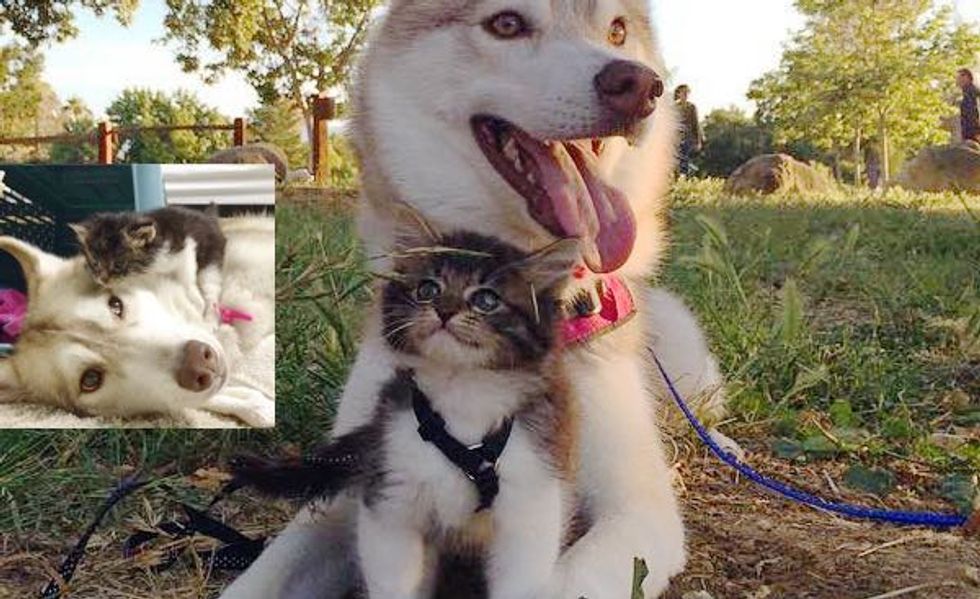 Husky Dog Mothers Rescue Kitten and Raises Her Like a Pup

Rosie is a rescue stray found at just 3 weeks old. She was a sickly little kitten until they paired her up with Lilo, a gentle Husky who changed the little kitten's life forever.

"She almost did not make it through the first night... Even with round the clock care. She was lethargic and limp. So we decided to go out on a limb and let her cuddle extensively with Lilo (the Husky)," Rosie's human wrote at Instagram.

"By some miracle, she started suckling on Lilo and Lilo went full 'mom mode'. Even stimulating it to go to the bathroom... Since then, Rosie's been getting much better and her eyes opened!

Lilo has always had an innate motherly instinct, but she really surprised us when she went full surrogate mode! Even letting Rosie suckle on her and stimulating her to eliminate! Lilo has never had puppies of her own, and never will. But motherhood may just be her calling"

Lilo has taught Rosie many skills. One of them is to walk with a pack of dogs. I think deep down Rosie thinks she's a puppy too.

"Rosie's first outing to the park! She's so adventurous and confident, just like her mama!"

The most purrfect pack! The little buddy on the right is still growing :D!

Watch video: Rosie and her surrogate mom Lilo the husky

Watch video: Rosie had an adventurous day at the park with her surrogate mom!

Watch video: Rosie plays with Lilo! So much cute!