Dog Takes in Motherless Kitten and Raises Him as His Own, Now 2 Years Later

Before Tuukka the kitten and Brady the dog met, the little feline had a rough beginning. He was found all alone stuck in a tree, hanging onto the branches in a Texas neighborhood. A good Samaritan rescued him and took him home to foster.

"She took him home but couldn't keep him, so we knew we had to adopt him," Taryn Choquette told Love Meow. 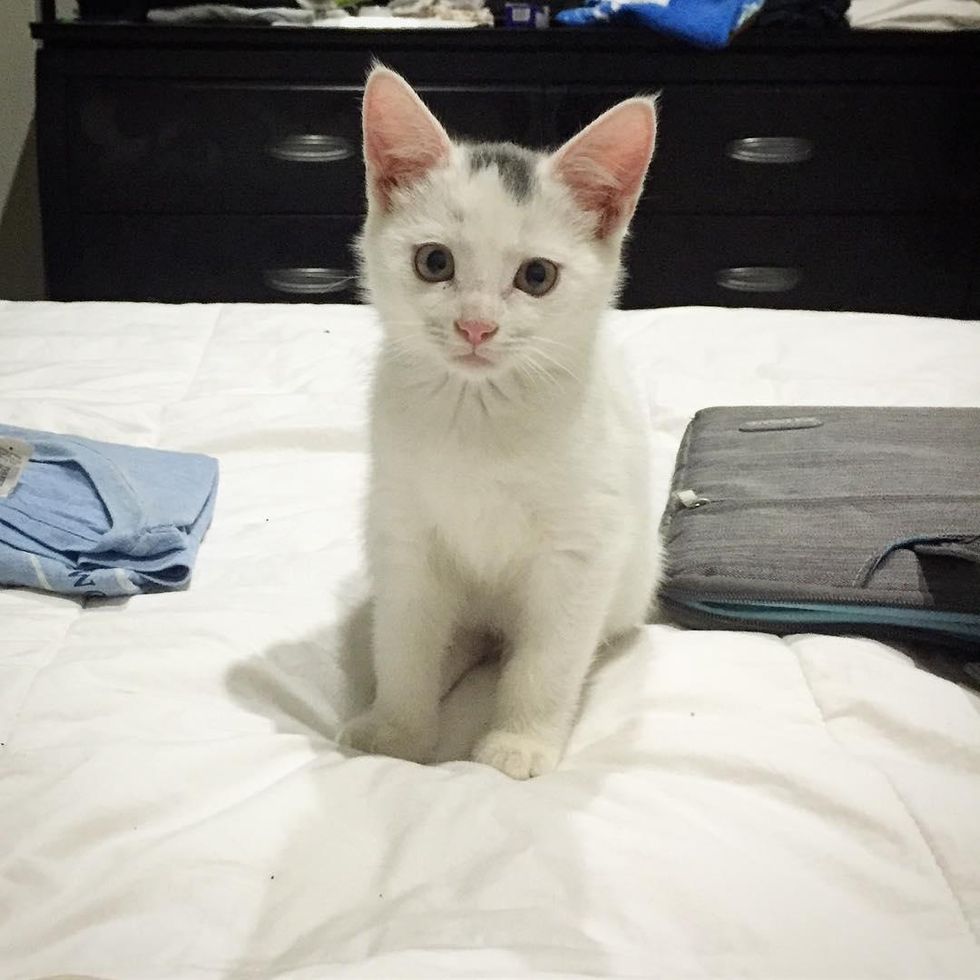 The tiny one-month old kitten was very timid when he first came to his new home. He would try to hide from everyone including their Golden Retriever Brady.

Tuukka was scared of the new surroundings and unfamiliar faces. Choquette knew that the little buddy just needed some time to adjust, so they settled him into a comfortable room where he could relax and feel safe.

"Brady was interested right away because he loves all creatures great and small, and he wants to be best friends with anyone / anything he meets," Choquette told Love Meow.

There is a sliding glass door separating his room and the one next to it. Every day Brady would sit by the door, patiently waiting for his tiny friend to warm up to him. 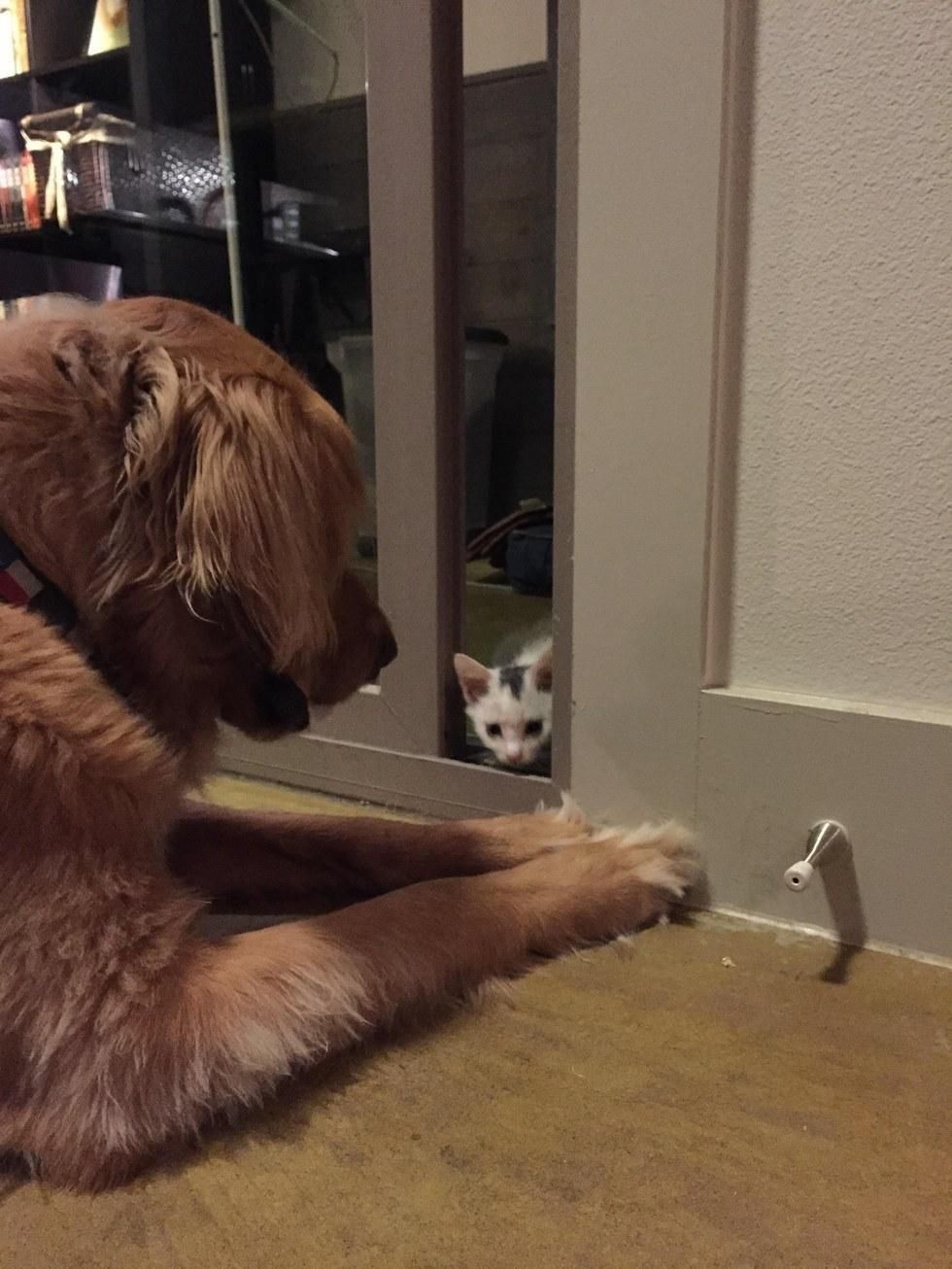 "Tuukka was really scared at first because Brady is giant compared to him even now, and he was only one pound when we got him."

Brady's patience finally paid off when Tuukka decided one day that he was no longer afraid and he would make Brady his buddy for life! 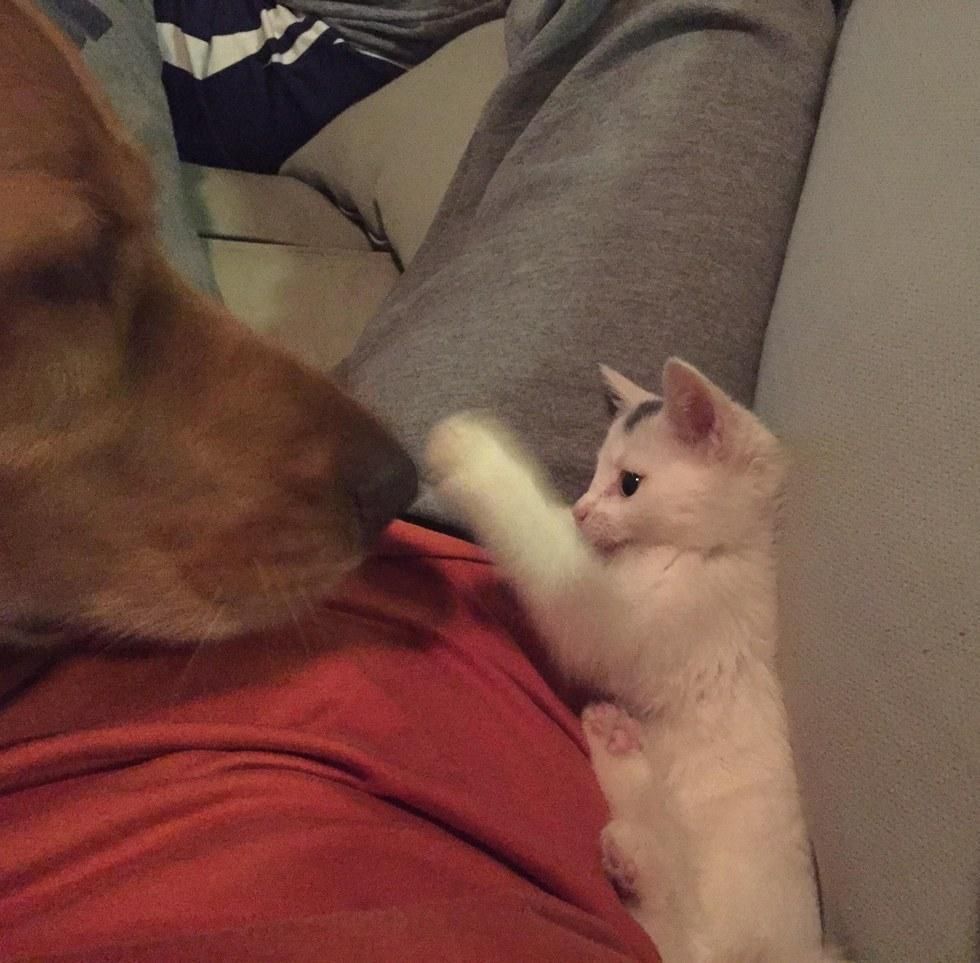 "It took about a week to introduce them but as soon as we did, they were fast friends," Choquette told Love Meow.

Tuukka gave Brady a kiss on his big snout and a few face rubs, and the rest is history. 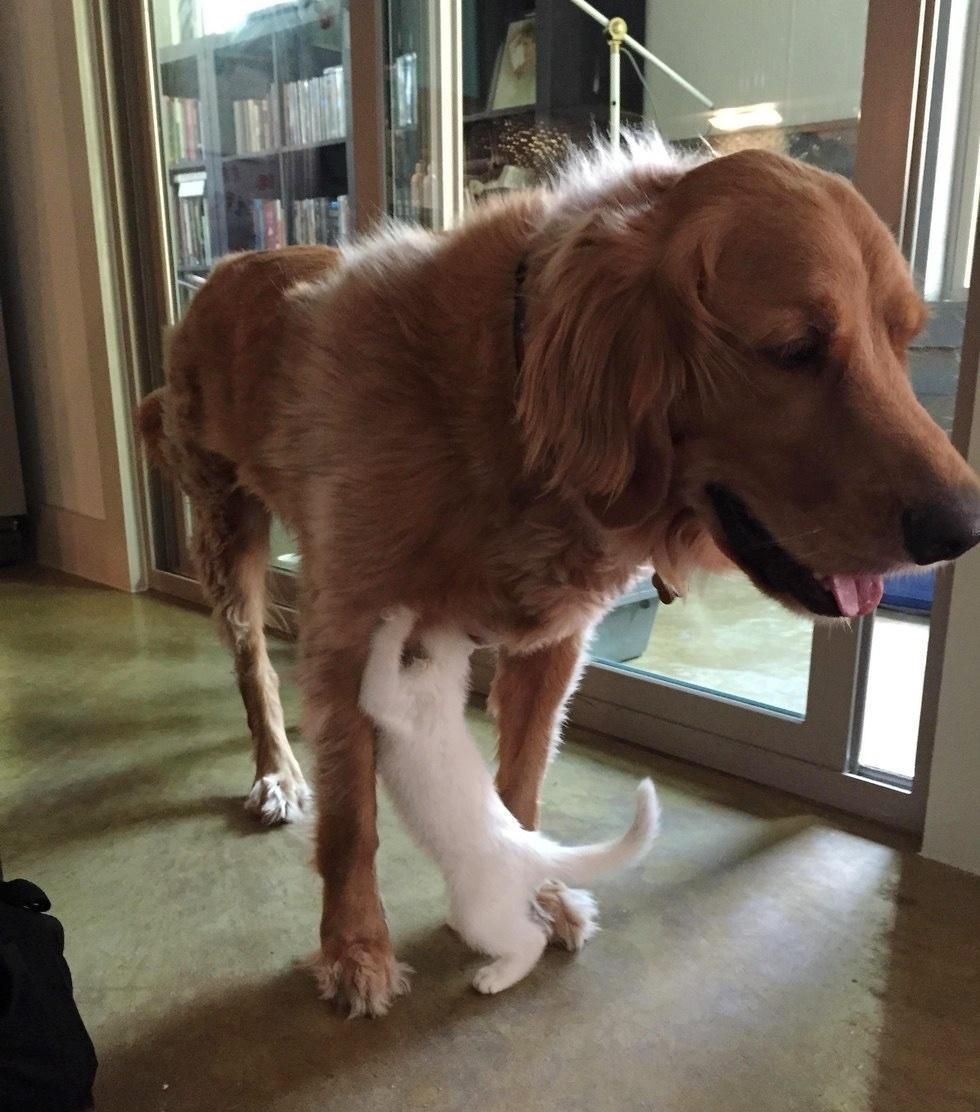 "And now, they are absolute best buds, brothers, and totally inseparable."

Tuukka thought Brady was his 'mom' and would nurse on him for comfort and love. The gentle Golden Retriever didn't mind at all. 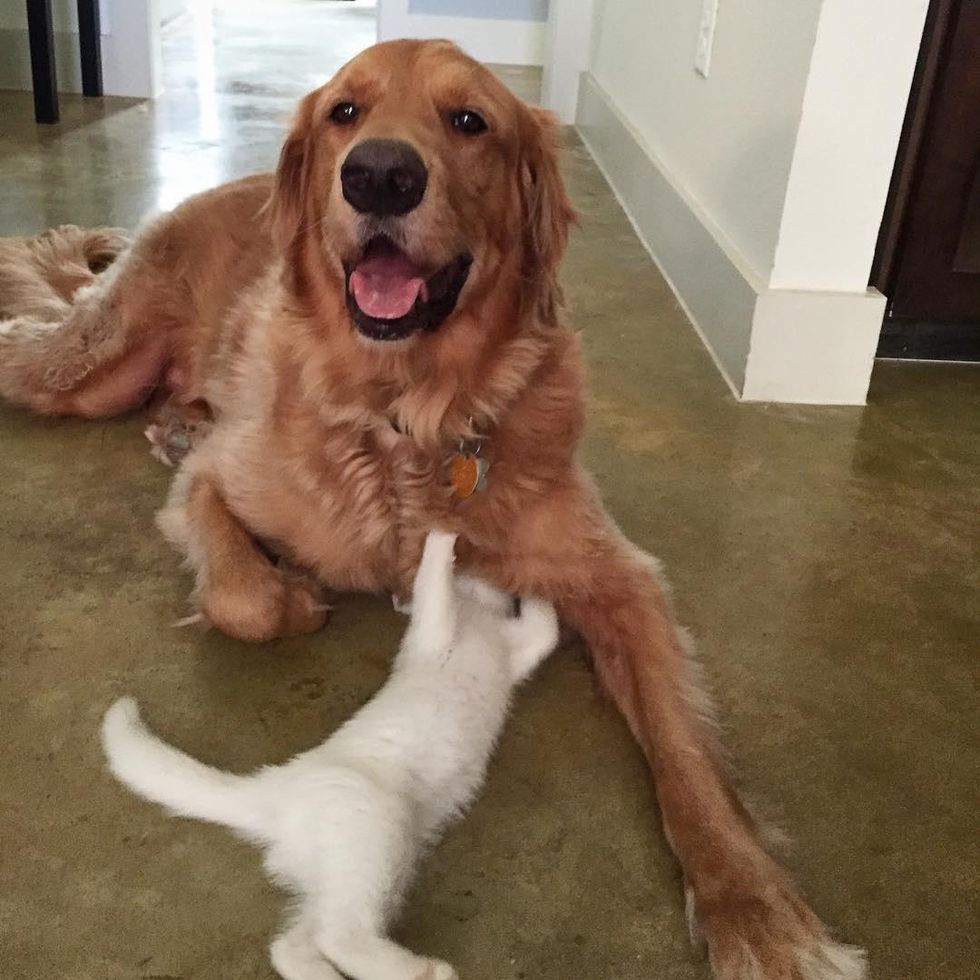 Tuukke was orphaned at a young age. Having Brady there by his side, taking on the motherly role, really made a big difference for the little feline.

Brady was so happy when his kitten finally accepted his love, and has been his protective big brother since. 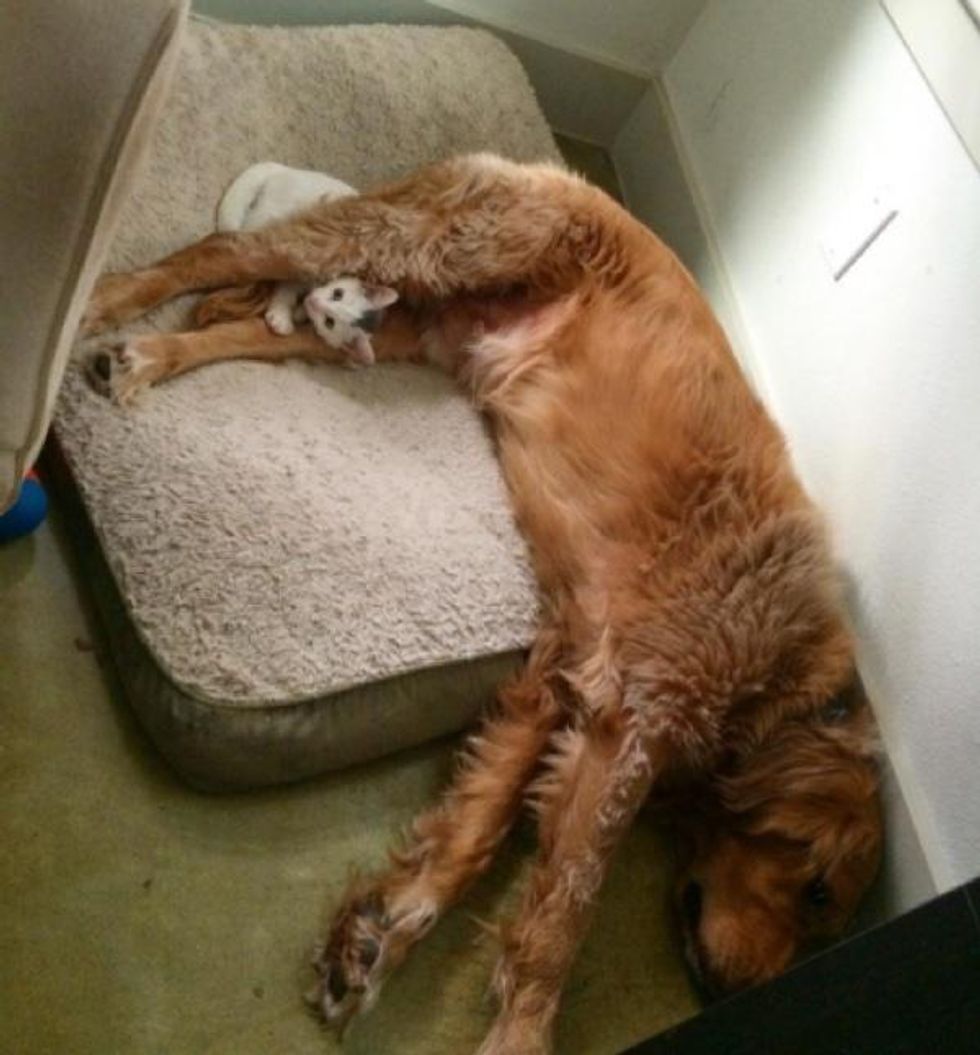 As Tuukka grew bigger and stronger, Brady would teach him the ropes around the house.

He showed him how to drink water from a bowl and how to clean up a plate the canine way. The smart little kitty learned fast, and to this day, he prefers drinking out of Brady's large water bowl instead of his own cat bowls. 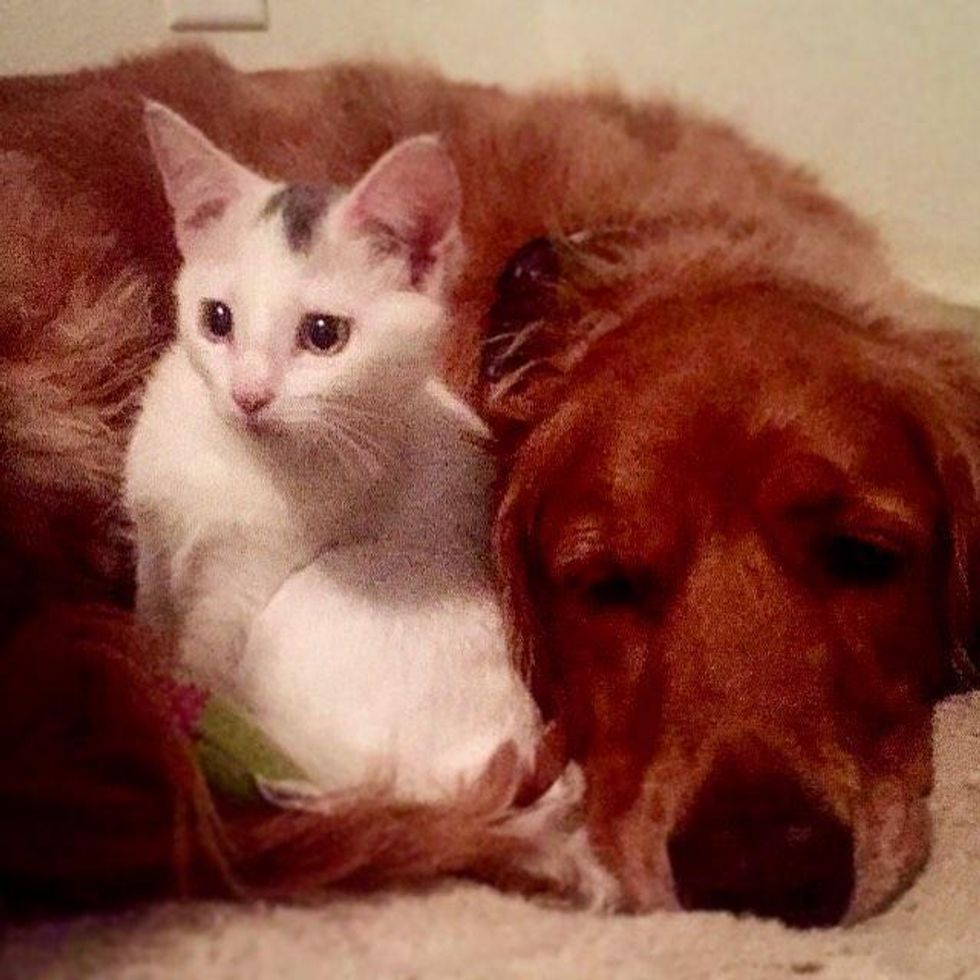 They like to play "hide and seek" and "chase" every morning and night. Tuukka is much smaller and very nimble compared to his giant buddy who tolerates his every antic. 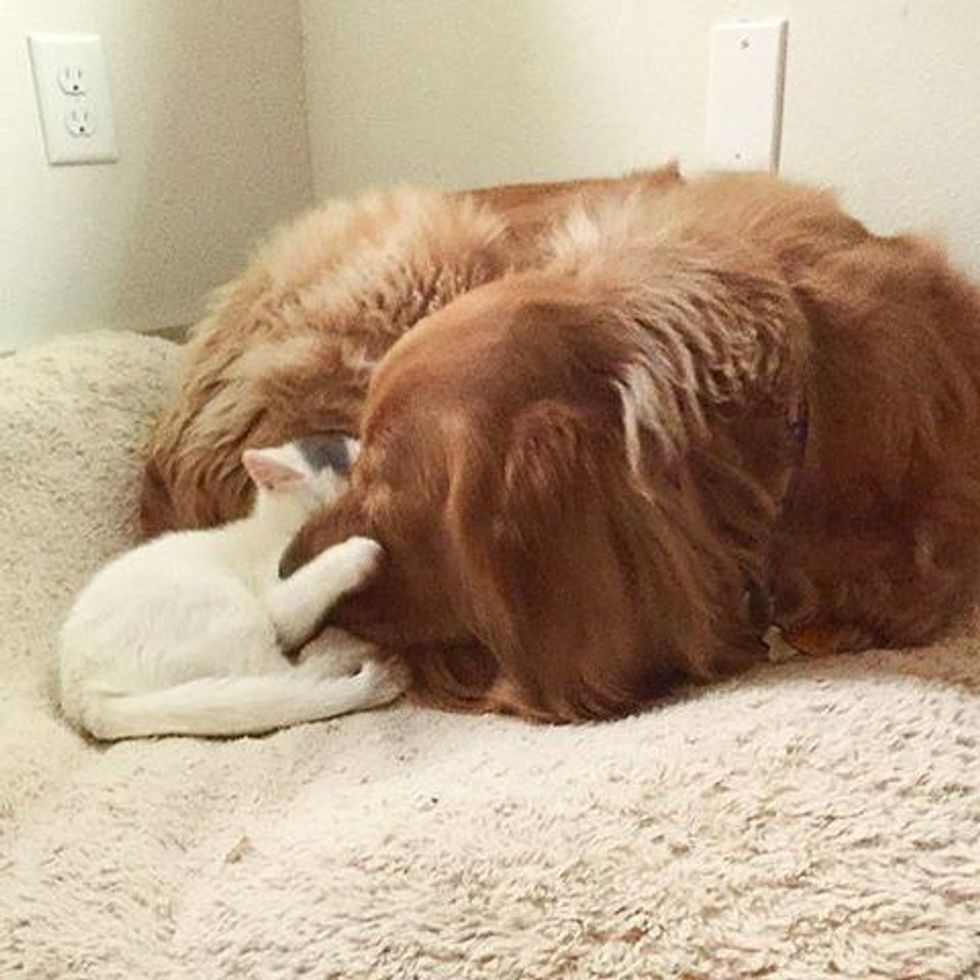 The two are also partners in crime. Tuukka has learned to get food off the kitchen counter and knock it off so Brady can sneak a snack. 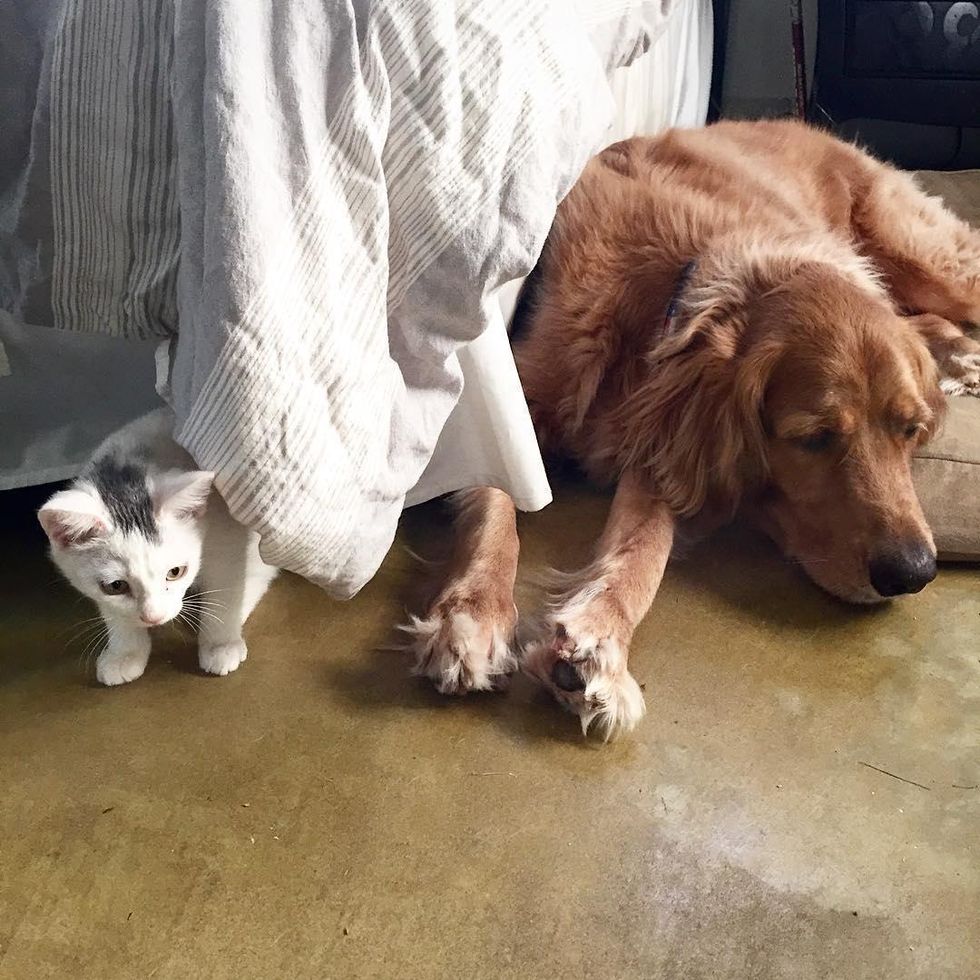 The bond they share is truly incredible. Tuukka can't stand being away from his best friend.

If Brady is gone for awhile, when he returns, the sweet kitty will cling to him and curl up in his arms as if to say "you are all mine!" 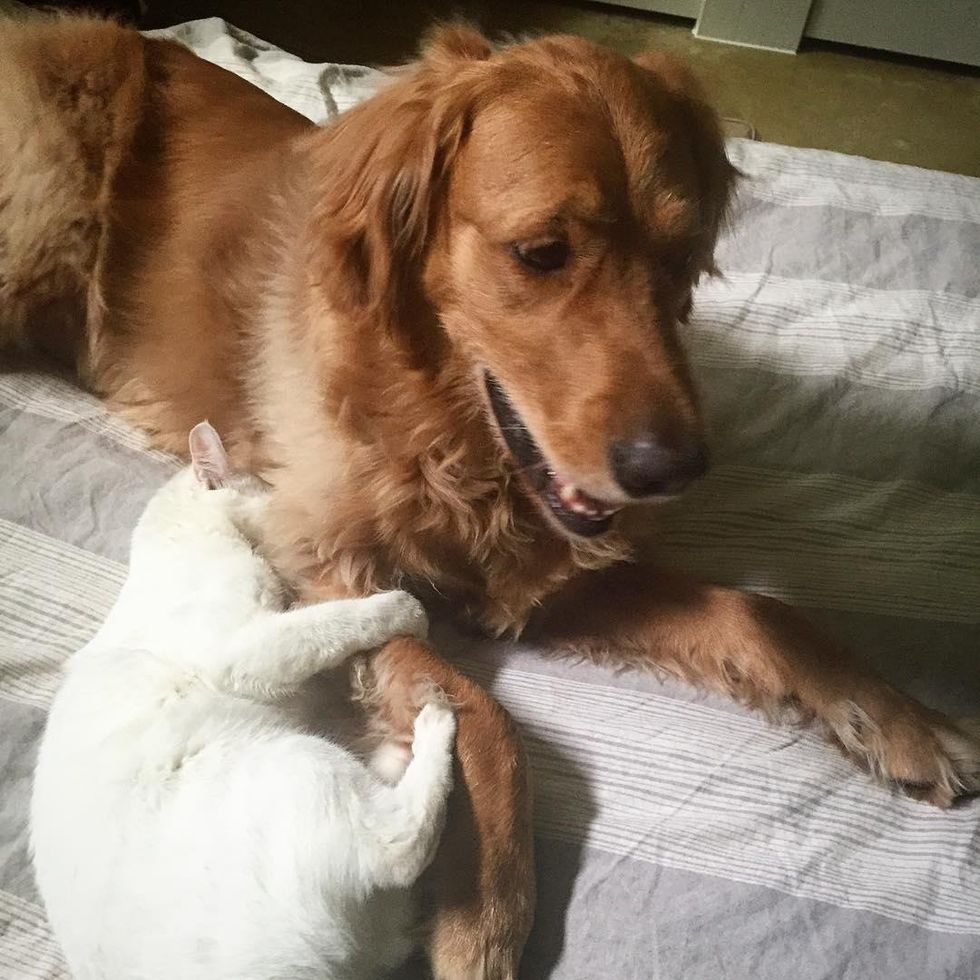 As the kitty grew bigger, the spot on his head started to fade. "White kittens may have a small spot of color on top of their heads when born. This color should be noted as it is the color that the white is masking," CFA said. "The spot of color may be visible for several months, but often disappears as the kitten matures." 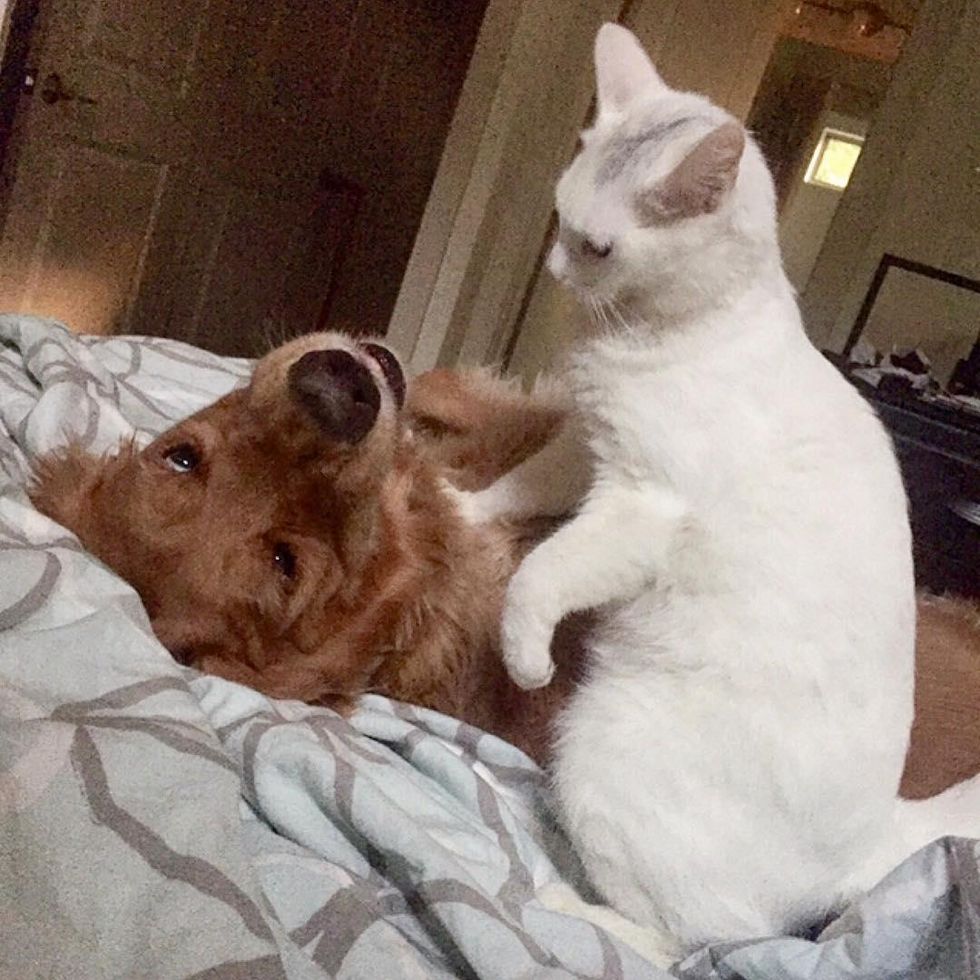 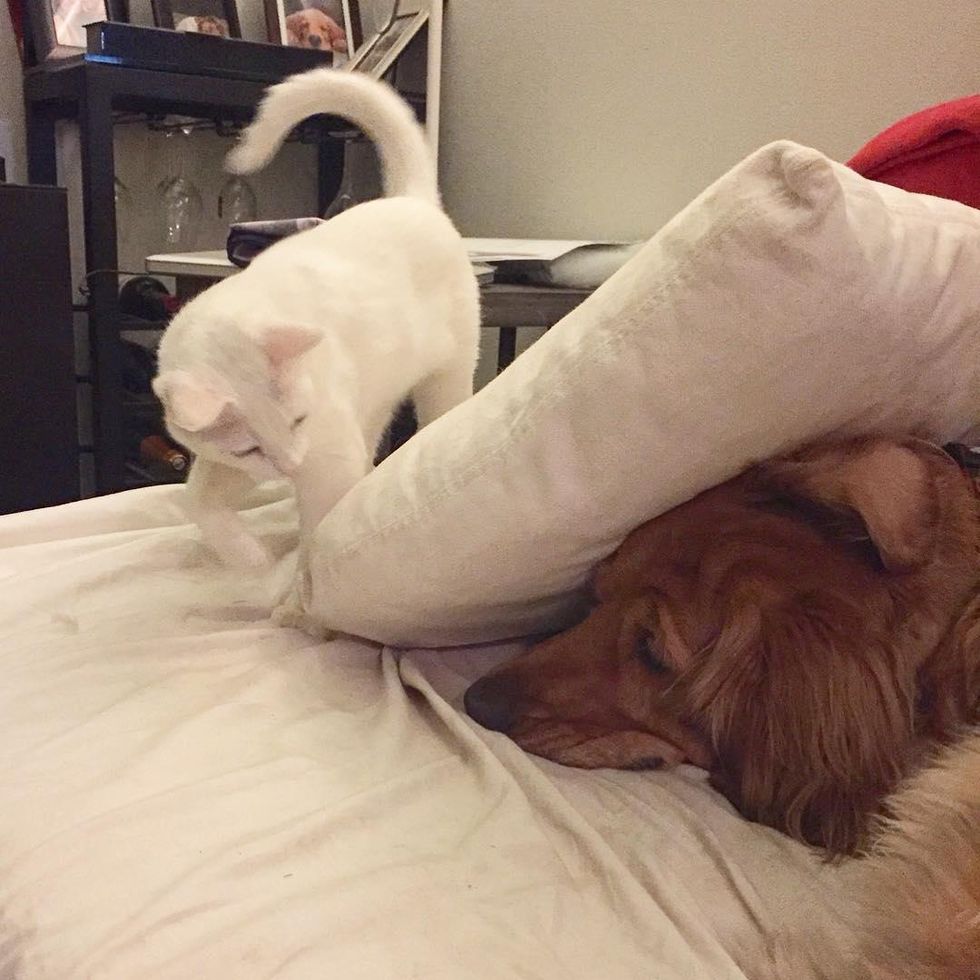 It's been over two years since they found each other. Now Tuukka has become the protective one of the two. He thinks like a dog and sometimes even tries to sound like a dog.

"Every time Brady gets back from a walk, Tuukka has to sniff him all over to see where he's been." 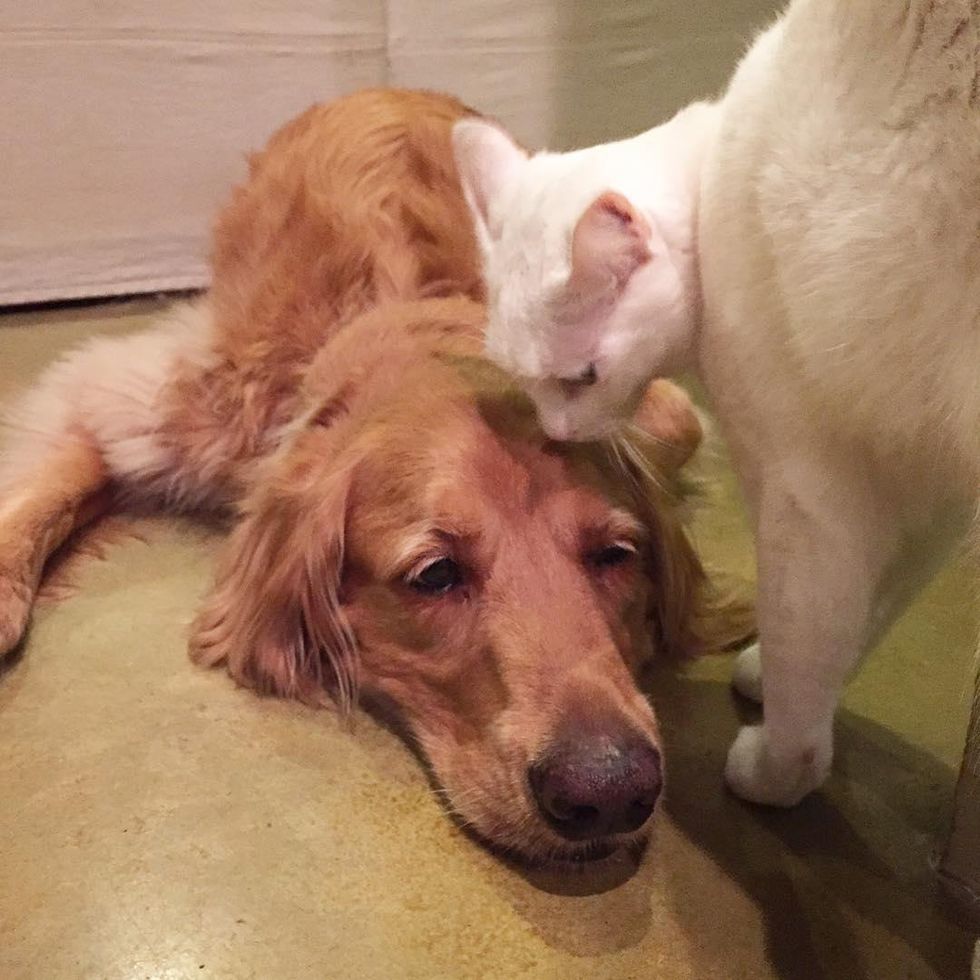 "We adopted Tuukka when he was teeny tiny and Brady immediately took him under his wing," Choquette told Love Meow.

Now two years later, their friendship is stronger than ever. Tuukka thinks he's a canine that meows and Brady loves him no matter what. 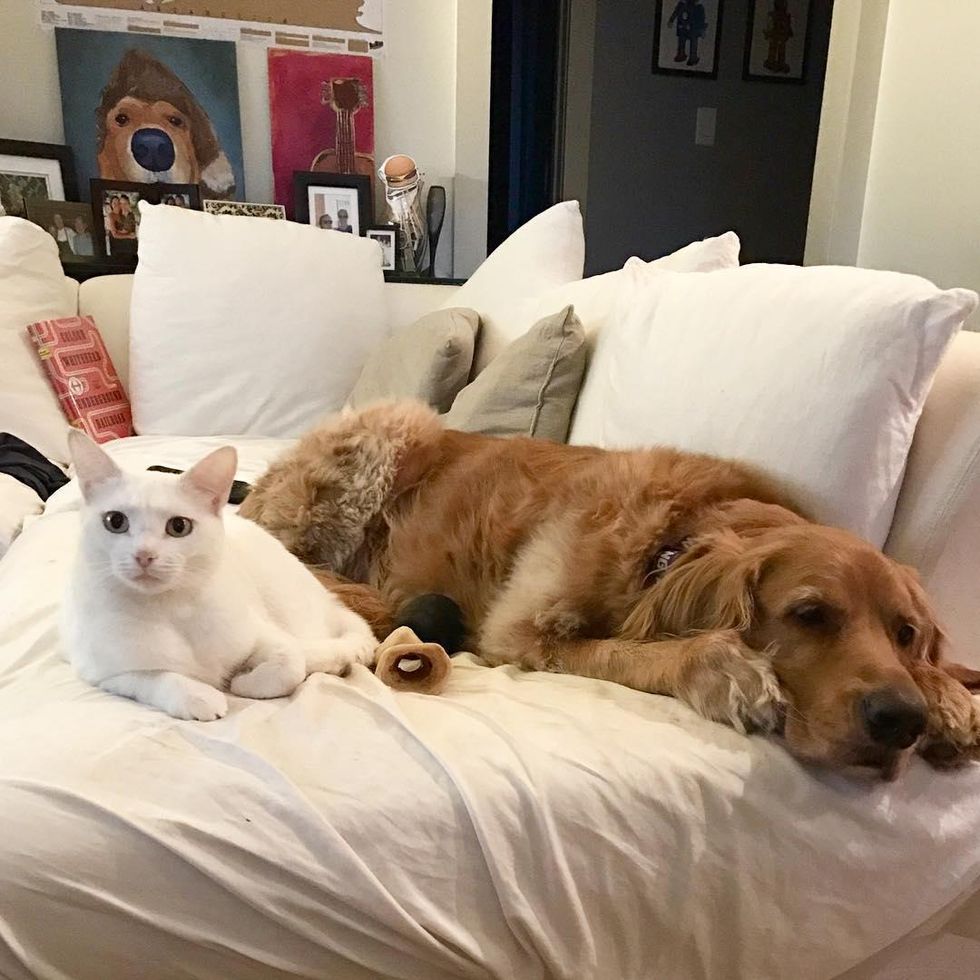 Brady and Tuukka on Instagram: “The nap partners 😴🐶🐱 #bradyandtuukka”