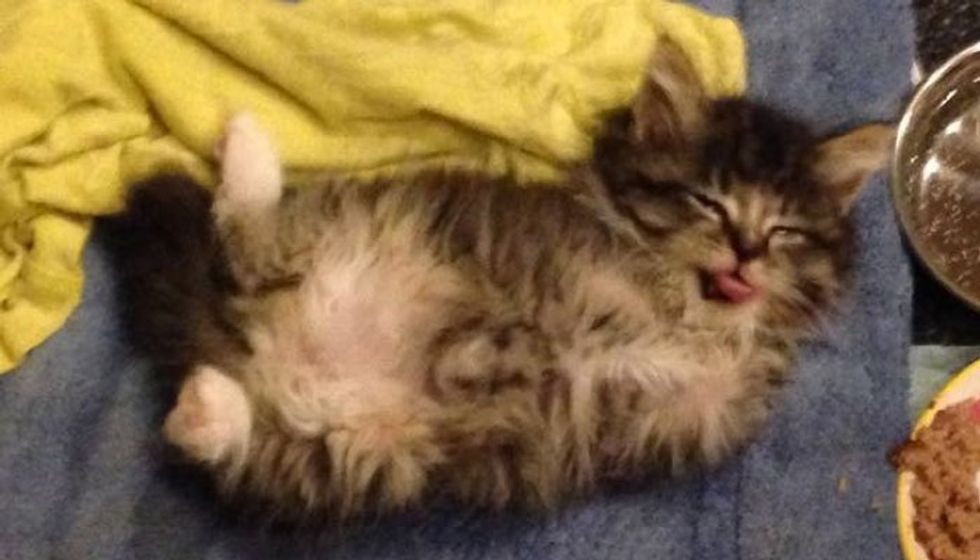 Pancake's mom shares her story at Facebook: "She was born in a litter of kittens, and she only had two back legs. I was told it was a struggle finding a home for her. I immediately said I wanted her and by Friday that week I had her.

When she came home with me she was 8 weeks old, and she wasn't very active. She spent most of her first week on her back, looking up at us. When I fed her I spoon fed her because she didn't (wasn't able to?) roll over to her tummy. She would wake up in the middle of the night, a few times a night, so hungry. So I would get up and feed her. She very quickly started moving around and standing up though. And she hasn't stopped since!

The day I got her my sister noticed that she has a third leg, the front left one, that is restricted by the skin. I took her in for a vet appointment and scheduled her spay and shots, and asked about the leg. He says that it should be easy to correct, and he will do that during her spay surgery. However, he says that she may not be able to use her leg fully. Even if it's not fully functional he says it should help with mobility and play. She already tries to use it a lot when she's running around the house and playing. Her tail is deformed as well, that is why it is shorter and has an irregular bone growth at the end, which you can feel. The vet says that won't be an issue for her. At that first vet appointment, four days after I got her, she weighed less than a pound. She was so teeny!

As far as naming her went, the few days before I got her I called her Teenysauraus Rex (inspired by pictures of Mercury running and playing!). And then I wanted to call her Chicken because it's a term of endearment used by one of my best friends. Then I wrote out a whole list of names, which most were food related. Sausage, Kimchi, Dumpling, etc. I picked Pancake because it was the cutest. Pancakes are fluffy! I thought it fit well.

'You're sure you want to read this?'

She stands up to play. She jumps on my bed! She eats a lot. She uses a litterbox. She likes to sleep on the bed with me. She chews on books. She likes to attack feet. I think she does things most any cat would do. Some people that see her for the first time say that it is heartbreaking that she can't do this or that. I can understand that, however I don't feel the same way anymore. Seeing how far she has come in such a short period of time is actually exciting.

She doesn't know she isn't like other cats. She is just being a cat the only way she knows."

All grown up now! "Pancake has great balance. She can sit like this very well if she's trying to see something or play with something. Her preferred sitting technique is on shoes, still."

Cuddle time after chasing a duck toy around the room.

WATCH VIDEO: Pancake plays with a toy. Look at that poofy tail!