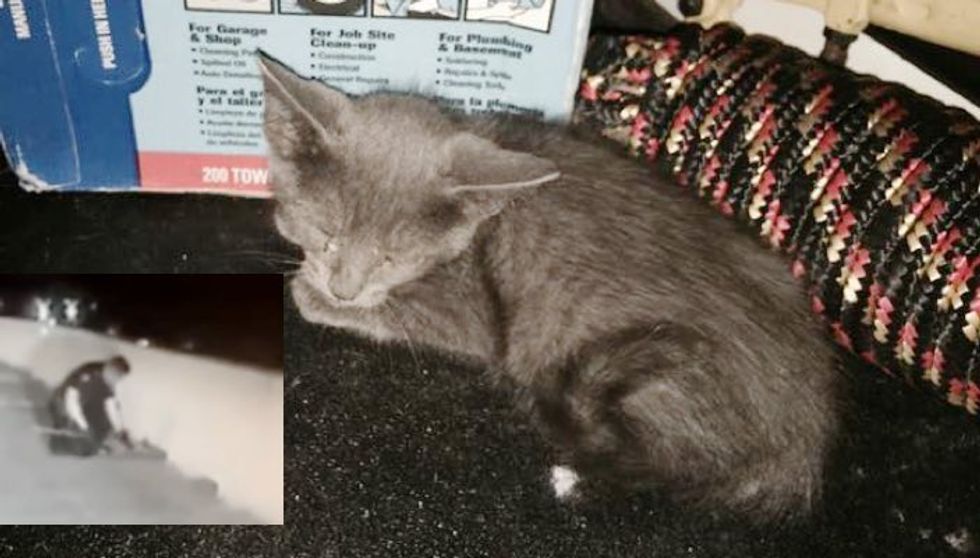 A Texas police officer stopped in the middle of a busy highway overpass to rescue a tiny kitten that was stuck between drain openings.

Officer Alberto Galvan heard the kitten crying above him on a highway overpass in Pasadena, Texas. He drove up to investigate.

Pasadena Police Department shares the story: "Officer Galvan was at the Exxon at Red Bluff and Beltway when he heard what sounded like a kitten crying. The crying sounded like it was coming from the Beltway. After shining his light up on the overpass, he could see the kitten's eyes reflecting back. The kitten was stuck on the Beltway 8 overpass over Red Bluff and could not get down.

The angle was too steep for Officer Galvan to walk up to the kitten, so he had to drive to 225 and U-turn back onto Beltway 8 and back to the Red Bluff overpass. After searching for a bit, he located the kitten wedged in between the drain openings at the bottom of the barriers. He could see the back of the kitten sticking out on the other side of the barrier and reached over in attempts to grab it. Apparently this kitten was NOT in the mood to be rescued and began scratching and biting Officer Galvan.

As a result, Officer Galvan lost his grip and the kitten fell back onto the Beltway and ran back under the barrier. Determined to rescue the kitten, Officer Galvan regrouped, licked his wounds, grabbed his gloves and lock out device and made a second successful attempt."

Watch the rescue in this raw footage:

Already falling asleep in the back of Officer Galvan's patrol unit.

"After calming the kitten down, and making sure it received plenty of water, Officer Galvan took the kitten to the caring arms of the Pasadena Animal Shelter."

Pasadena Police Department told Love Meow that Kitty Galvan was adopted immediately. "Assistant Chief Bruegger attempted to adopt him but he was SECOND on the list."

We are happy that Kitty Galvan is now in his forever home and no more wandering outside! Share this story with your friends!