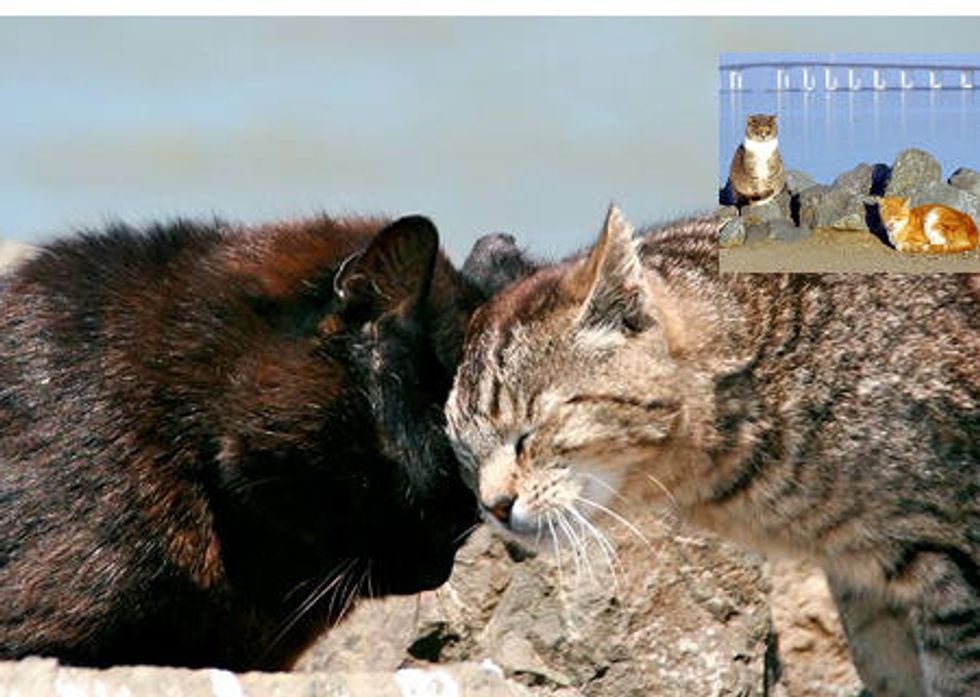 What would you do if you found 175 cats living along a popular hiking/biking trail? That's what a group of volunteers from San Francisco bay area faced back in 2004.

"They dedicated themselves to getting all the cats spayed/neutered to humanely stop their population from growing. They also began rescuing kittens and friendly adult cats and finding them homes. A feeding program was quickly developed, complete with feeding stations built by fantastic Homeless Cat Network volunteers, which were placed well away from wildlife habitats," Project Bay Cat wrote.

"It’s not your typical colony. Unlike most feral cats, who live in the shadows, at Project Bay Cat they’re right out in the open. Living along a popular recreation trail, hundreds of runners, kiteboarders, bikers, and walkers see the cats every day. It’s hard to miss the cats when they’re lovingly wrapping tails around one another and posing on the rocks beside the sparkling bay with a picturesque bridge glowing in the background," said Cimeron Morrissey, writer of Catster.

“It takes a community to take care of community cats. It’s not the cats’ fault that they ended up living outdoors, and it’s not the most ideal life for them, so it’s up to compassionate people to make it right,” says Project Bay Cat’s director, Mary Macdonald. “The colony is shrinking, and one day there won’t be any more cats at Project Bay Cat, which is all part of responsibly managing a colony. But until then, we’ll work hard to make sure that no other cats are abandoned and that those who remain in the colony get the care, love, and kindness they deserve, so they can live out their lives in peace.” (Catster)

You won't believe how far some of these feral kitties have come ever since thanks to Project Bay Cat.

Flo and Red sunbathing by the bay

All the cats are spayed/neutered. They rescue kittens and friendly adult cats and find them homes.

"Speckles has learned that if she accompanies her volunteers on the walk to her feeding station, she gets first crack at the wet food. Smart kitty!"

"Years ago, Comfort was terrified of people; who would have guessed we'd someday be getting pictures like this? It's all thanks to the love and endless patience of our volunteers."

"Hard to believe that only a year ago, Target was so shy that you'd only catch glimpses of her as she made stealthy, covert trips to the food bowl. Now she's turned into a Love-Seeking-Missile who often intercepts volunteers on the way to her feeding station, hoping to be petted. Just look at that smile! Looks like she accomplished her mission."

Croucher gives a volunteer her very best head-bumps and lots of love!

"Buster. As soon as the camera comes out, he climbs farther away on the rocks and closes his eyes. No amount of whistling or shaking the treat bag will help. But he somehow knows the instant the camera is put away... and then his eyes pop open, he comes close again, and naturally he starts doing something adorable."

Diamond and Funny Girl like the rest of the community cats there are affectionate with one another.

With her happy tail held high, Teddy welcomes a volunteer.

One of their volunteers built this cinderblock bridge for the cats. "Even when the waterway flooded last winter, the cats still had a way to get to the feeding station from the sheltered area where they sleep."

They wanted to see what the Bay Cats would think about cardboard boxes.... this happened :).

"Rise and shine! The minute Long Socks and TimmyBob wake up, they always start their day with head-bumps and love."