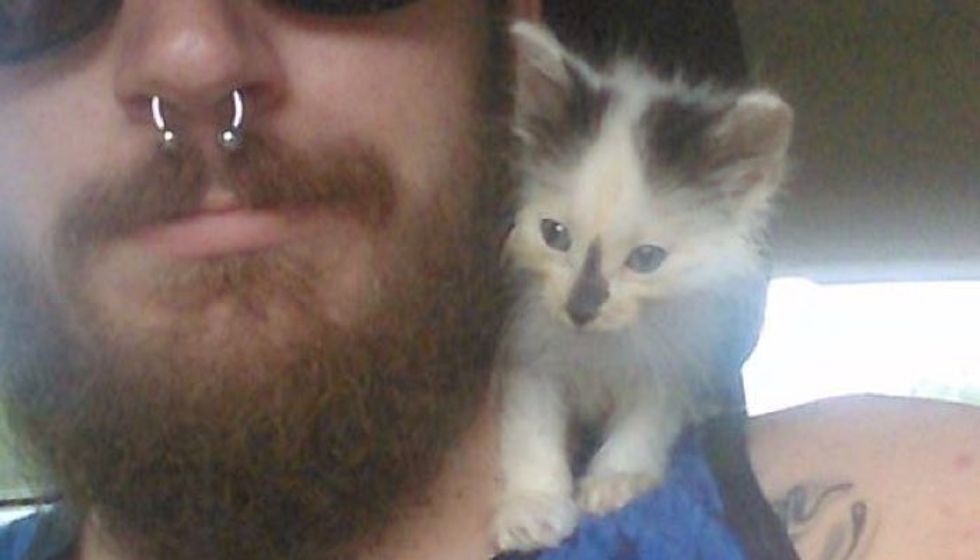 This man took in a tiny roadside kitten and gave him a long and happy life he always wanted.

When they met, the kitten snuggled up to him on his shoulder for a nap. It was love at first sight.

"So the little floof you see on my shoulder is a kitten who so far has had a pretty rough life. Luckily though we are able to give him a good one. This picture here is within the first 5 minutes of me holding him. He climbed straight up my chest and rested there. I decide to name him Abner, Headbutter of Evil, Destroyer of Worlds. Abner for short," he wrote via imgur.

"My friends found him on the side of the road, apparently abandoned by its mother, covered in ants, and seemingly hours away from death. They took him in, cleaned the ants off, and syringe fed him both food and water," he added.

"Shortly after this picture he climbed down into my lap and passed out for the hour car ride home."

When they were home, he quickly set up a feeding spot for the very hungry fur baby. "I put some wet cat food down and some kitten formula and he went for the wet food first then slurped down the formula. Eat and drinks all on his own and everything. Always comforting seeing when he has a full belly," he said.

Milk face! "Here he is freshly after eating and drinking the formula, still a tad bit of a messy eater but its cute watching him."

Look at the difference! "The day he was found to today. Little guy has made an awesome recovery and is full of energy. His weight is normal, curiosity is strong, and he loves to attack his big brother."