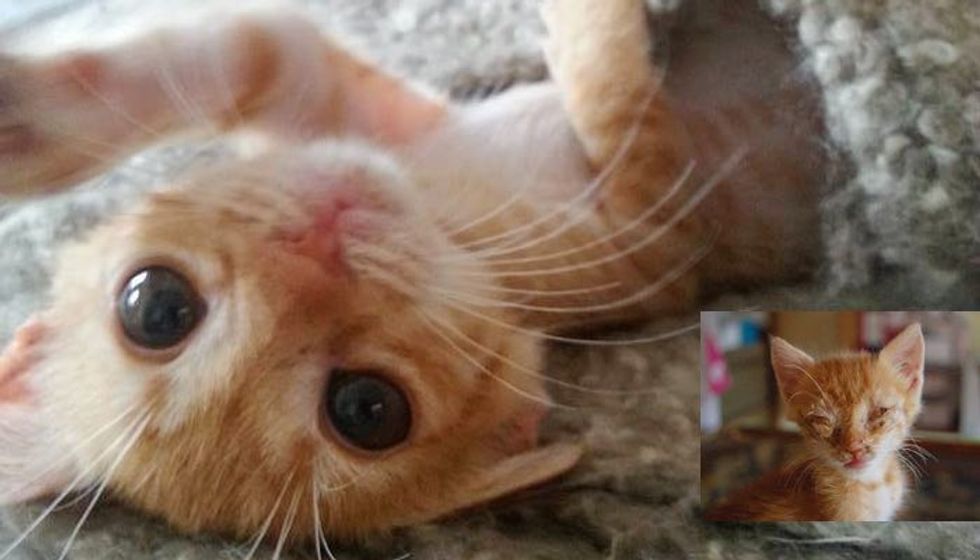 An animal rescuer helped a tiny kitten eat and nursed her back to health.

When they found Mira a month ago in Samos, Greece, she was a sickly little kitten who refused to eat. Her eyes were shut closed due to infection. The tiny ginger girl ran away when rescuers from the Greek Cat Rescue tried to feed her. With only skin and bones, the rescuers were not going to let her starve.

A kind woman from the rescue group took the kitten home and started hand feeding the kitten one bite at a time. At first, Mira didn't enjoy it and resisted eating with the little strength she had left. She was still very frightened, but the rescuers weren't giving up.

After a few weeks of hard work, Mira started to think that these humans aren't that bad. She began to enjoy the food asides from the medicine that she had to take .

Mira is now eating very well and growing leaps and bounds. She is not scared of her caretaker any more and even has tried to show a bit of dominance with the older cats.

When she turns on her purr motor, she is ready for some cuddle time with her caretaker.

Her eyes have completely healed up!

"Mira is doing very well, she is eating very much and plays in between and sleeps of course. Mira gained 400 grams in less than 3 weeks time. She is very sweet and walks after me everywhere I go, and prefers to sleep very close to me," Greek Cat Rescue told Love Meow.