A tabby kitten and her siblings stayed together until rescue arrived, and they left street life behind. 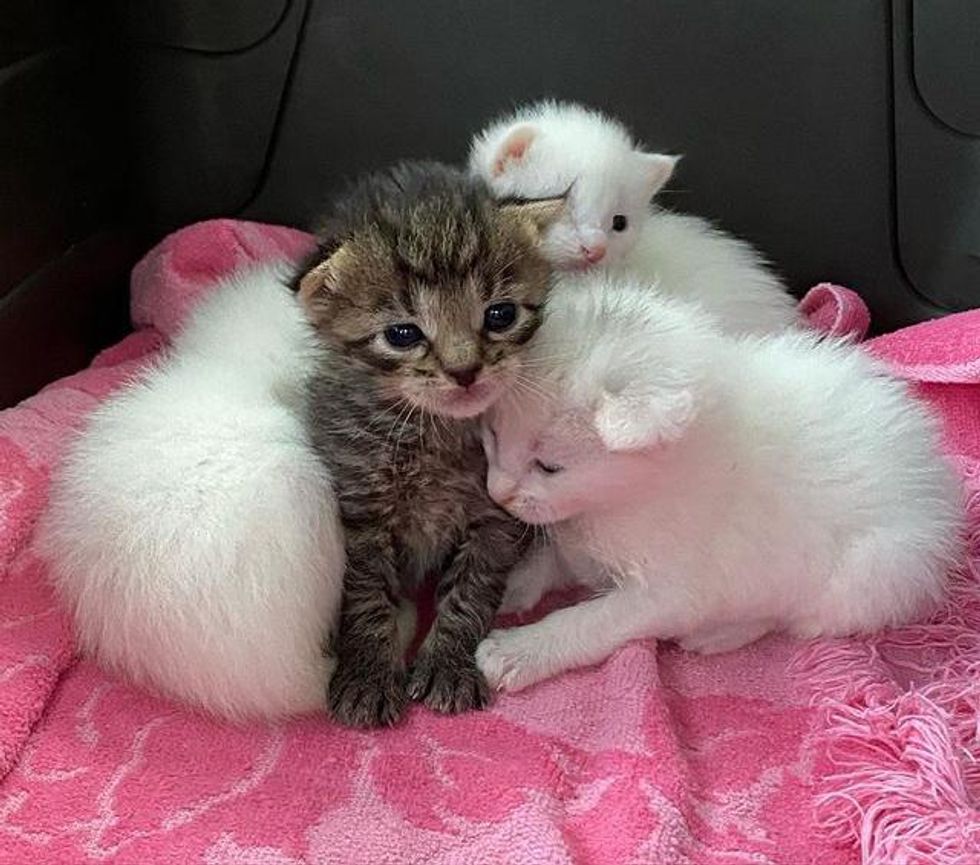 A litter of four kittens were brought to ARPO, an animal rescue in Indianapolis, Indiana, after their mother was found hit by a car. They were huddled up as a quartet the entire time as if to keep each other comforted.

They were estimated to be three weeks old and needed round-the-clock care and medical attention — one of the white kittens had an injured paw, and the other two were wobbly.

The sole tabby of the litter seemed to be the glue that held them all together. 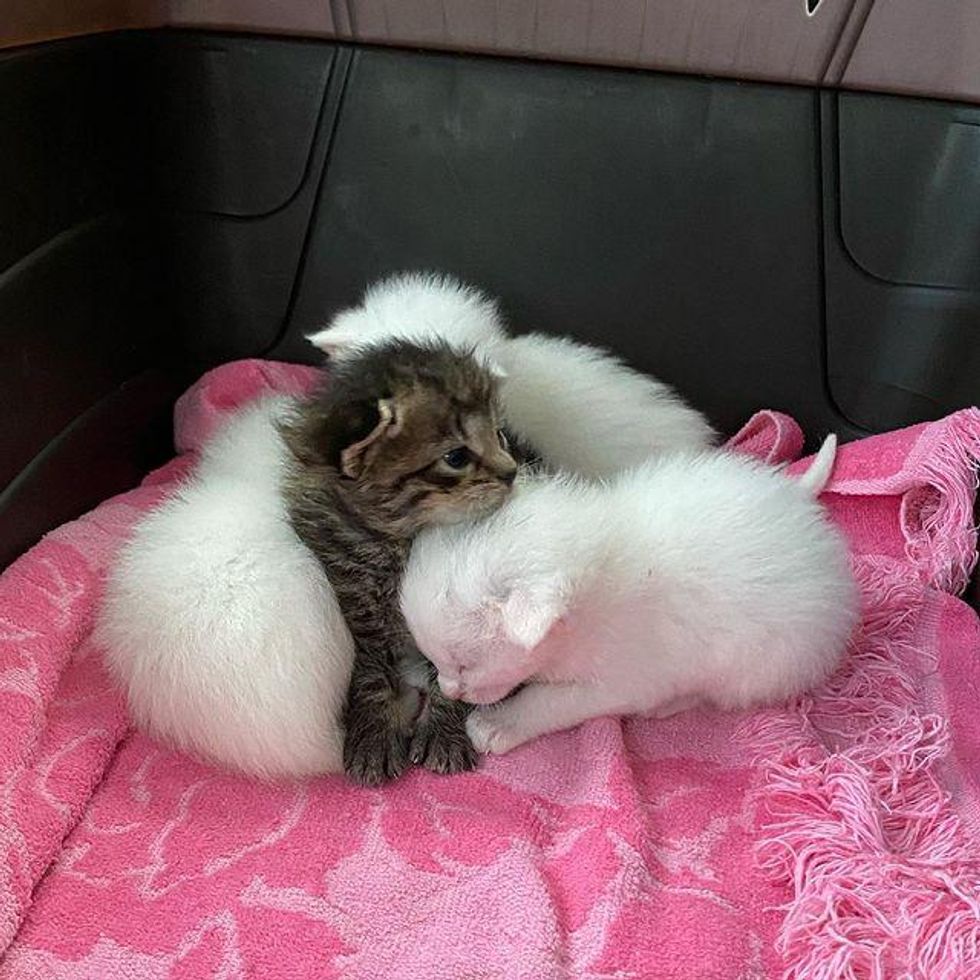 They kept each other comfortedLori White

"There are three girls and one of the white kittens is a boy," Lori White, foster volunteer of ARPO, shared with Love Meow.

With good food, supportive care, and a comfortable place, the kittens (Ducky, Cera, Petrie, and Littlefoot) came out of their shells. "Originally, we thought Cera and Petrie (the two wobbly kittens) had cerebellar hypoplasia, but as it turns out, their muscles just took longer to get strong." 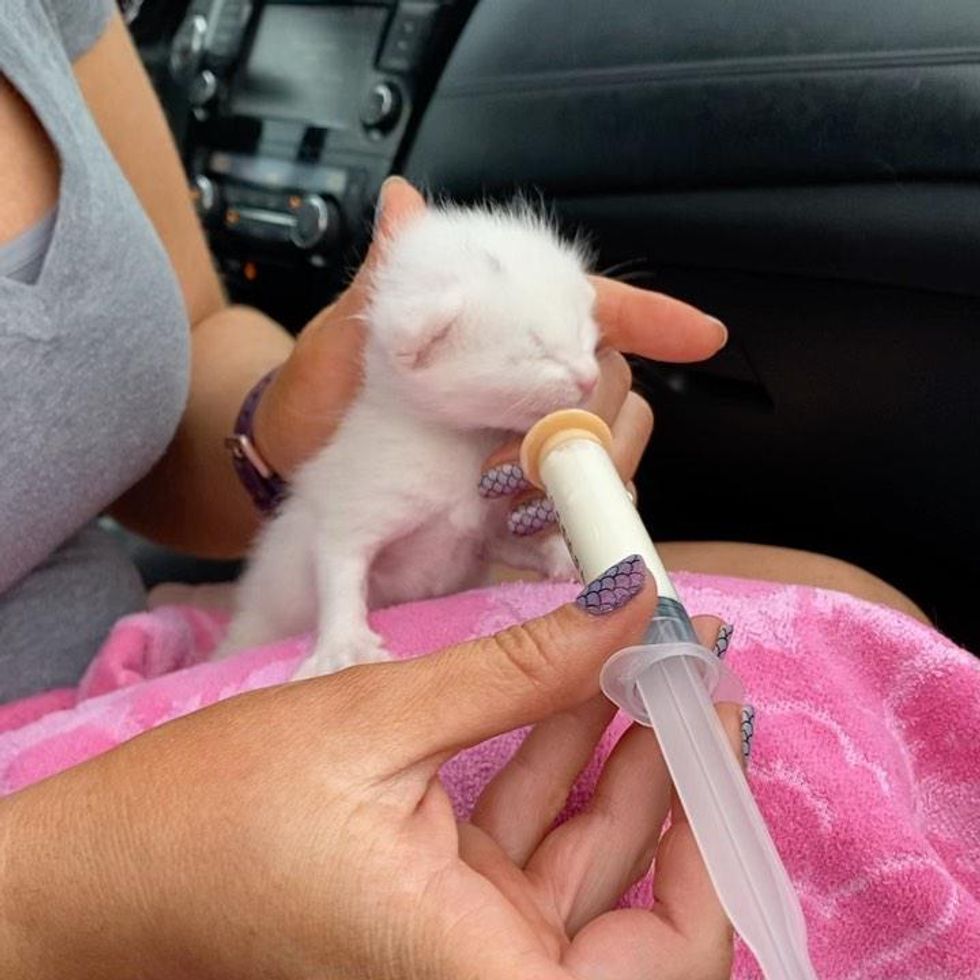 "Petrie had a warble that was removed from his neck and Ducky (the tabby) had a scare with aspiration pneumonia and was hospitalized for two days but thankfully recovered."

Littlefoot, the kitten with the injured paw, was able to heal up nicely after a week of wound care and antibiotics. She now sports a smaller mitten on her left front leg, but it doesn't slow her down a bit. She was the last kitten to start eating solid meals as she had a strong affinity for her bottle. 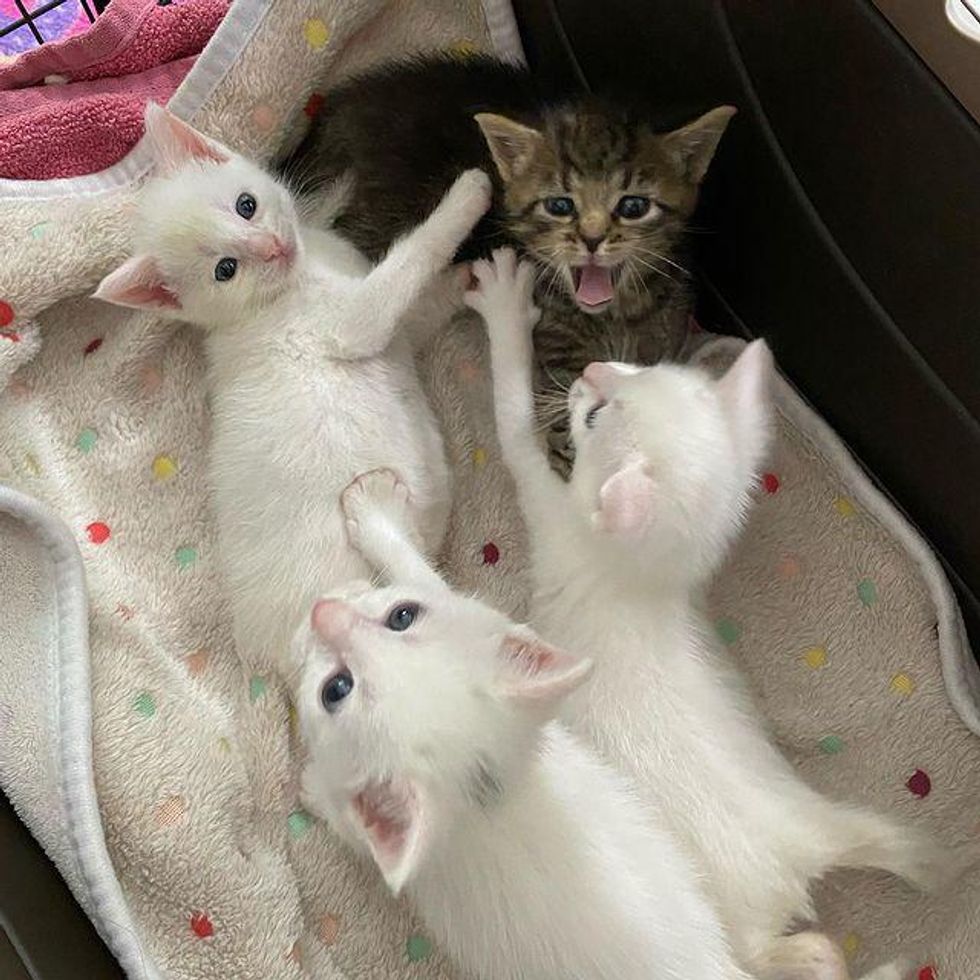 With proper care and good food, they began to thriveLori White

Ducky the sole tabby stands out amongst her siblings. She is very vocal about when her next meal should be served, and was one of the first kittens to figure out the litter box.

After getting her belly filled, she rolls on her back for some rubs and then joins her littermates for an extended cuddlefest. 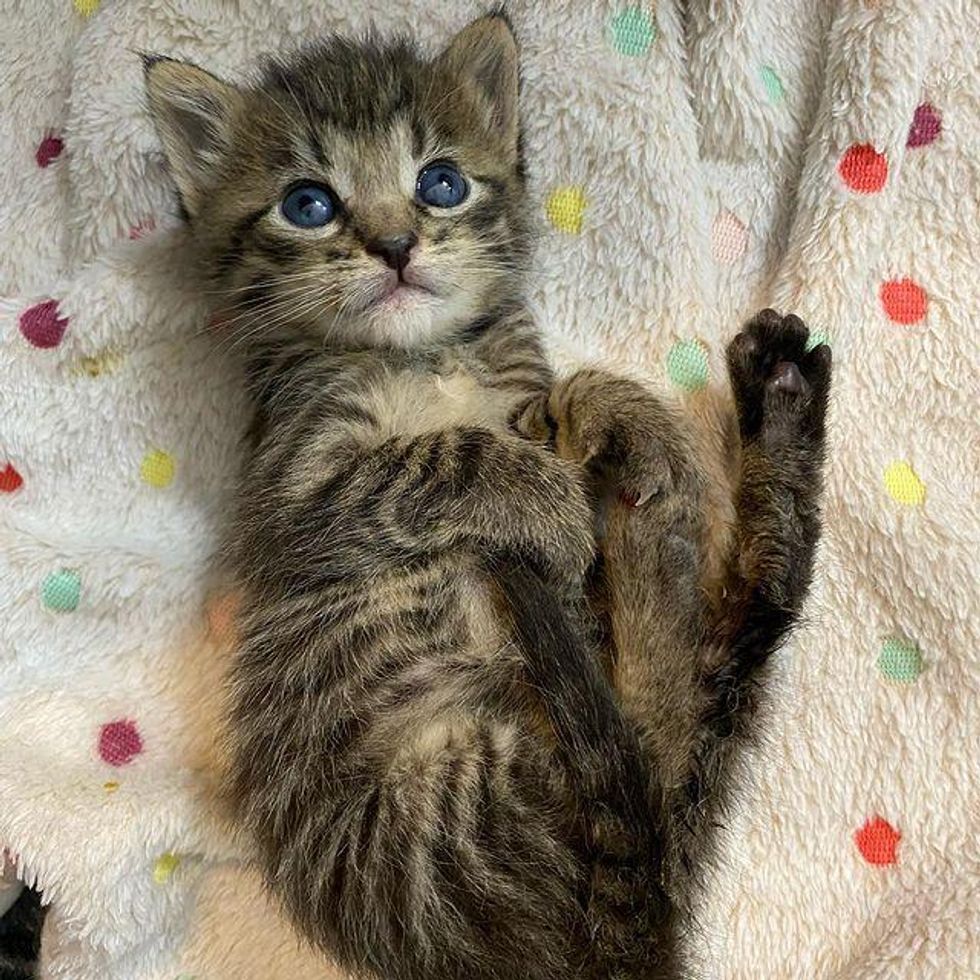 Ducky is the sole tabby in her litterLori White

The quartet have grown by leaps and bounds over the last few weeks. Their personalities are really shining through.

When they are not snoozing in a cuddly fashion, they are busy scampering around their room, wrestling with each other, and climbing anything they can lay their paws on. 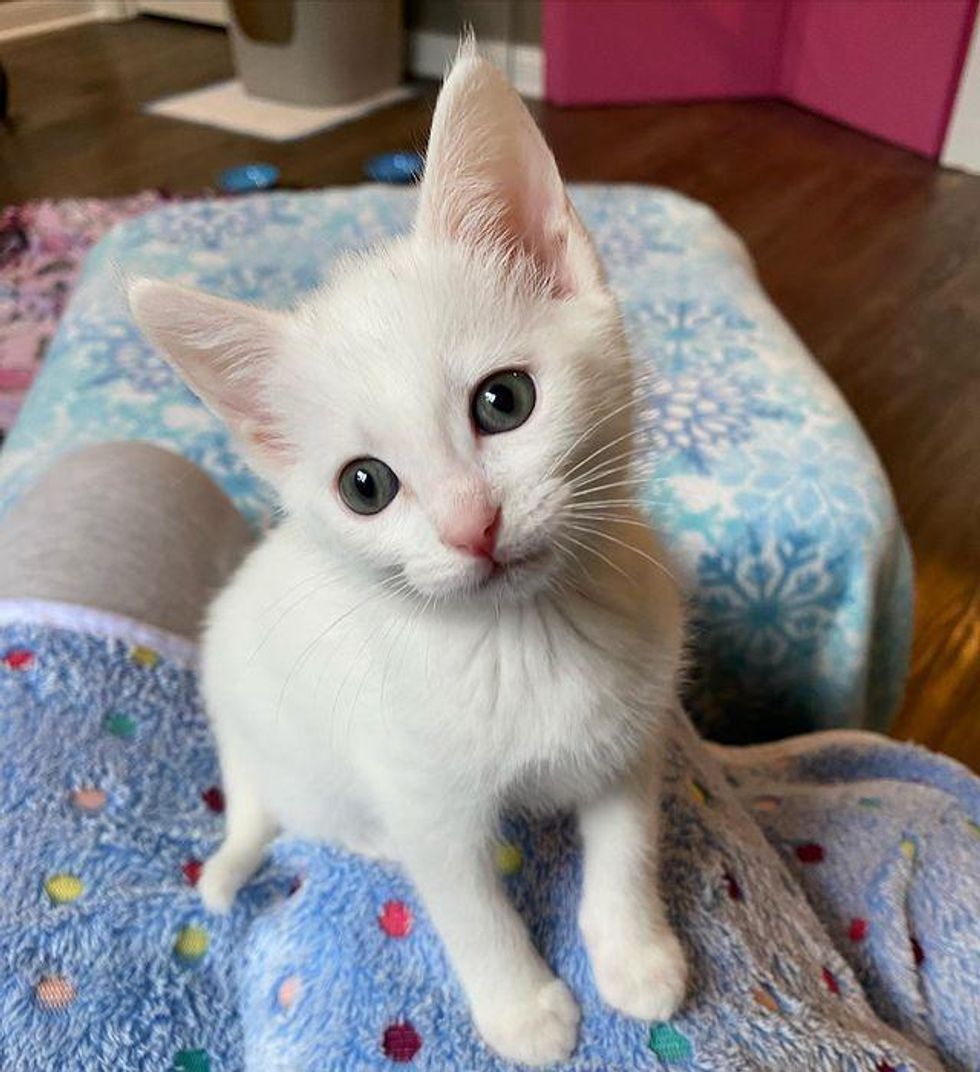 Ducky insists on being the center of the attention and isn't afraid of voicing her many opinions. She has discovered that she is a natural "supervisor" and "hair stylist" when she gets on her foster mom's shoulders. 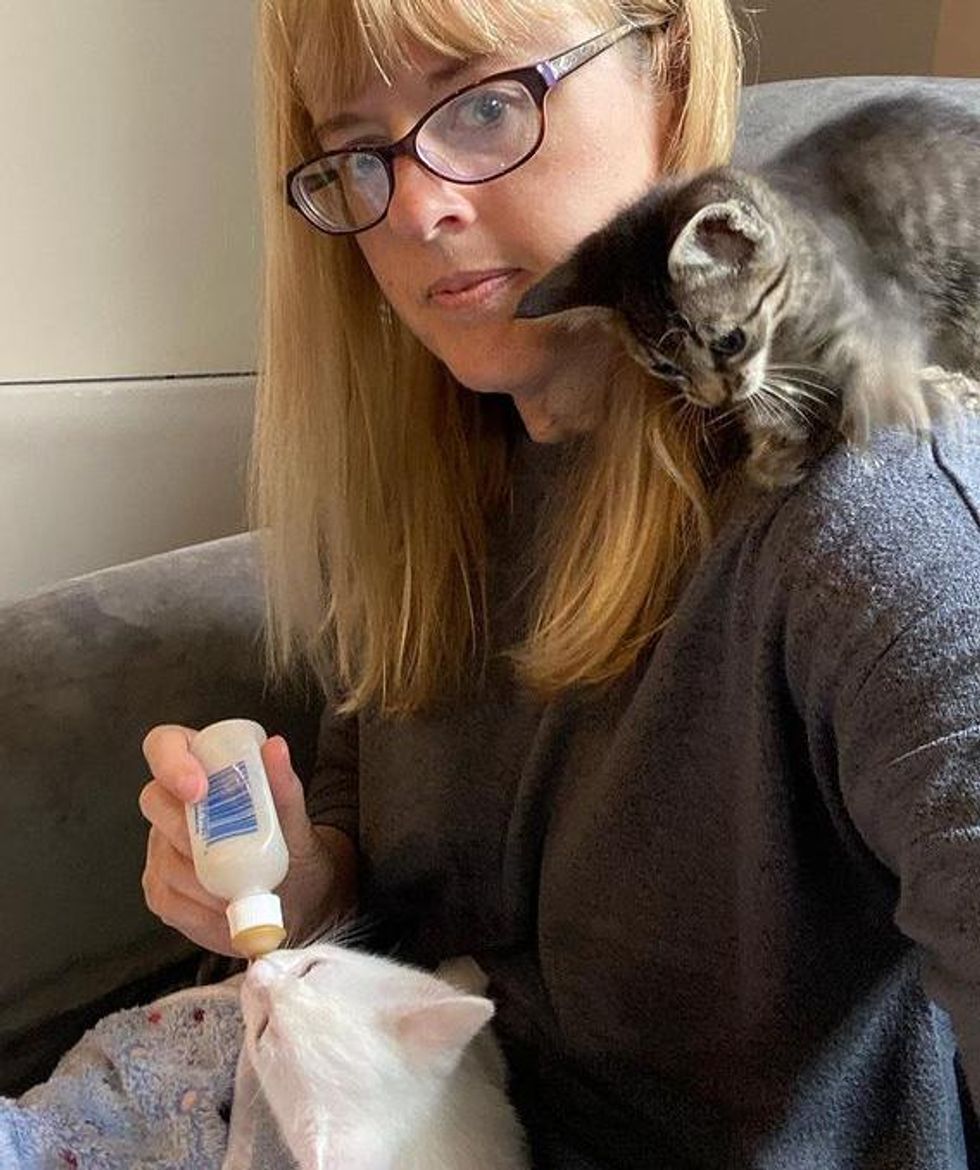 These kittens are the lucky ones as they will never have to go through another day on the street. With the help of a foster family, they have all fully recovered and are working on growing big and strong.

"Everyone is super playful and affectionate! They should be available for adoption through ARPO early September," Lori shared with Love Meow. 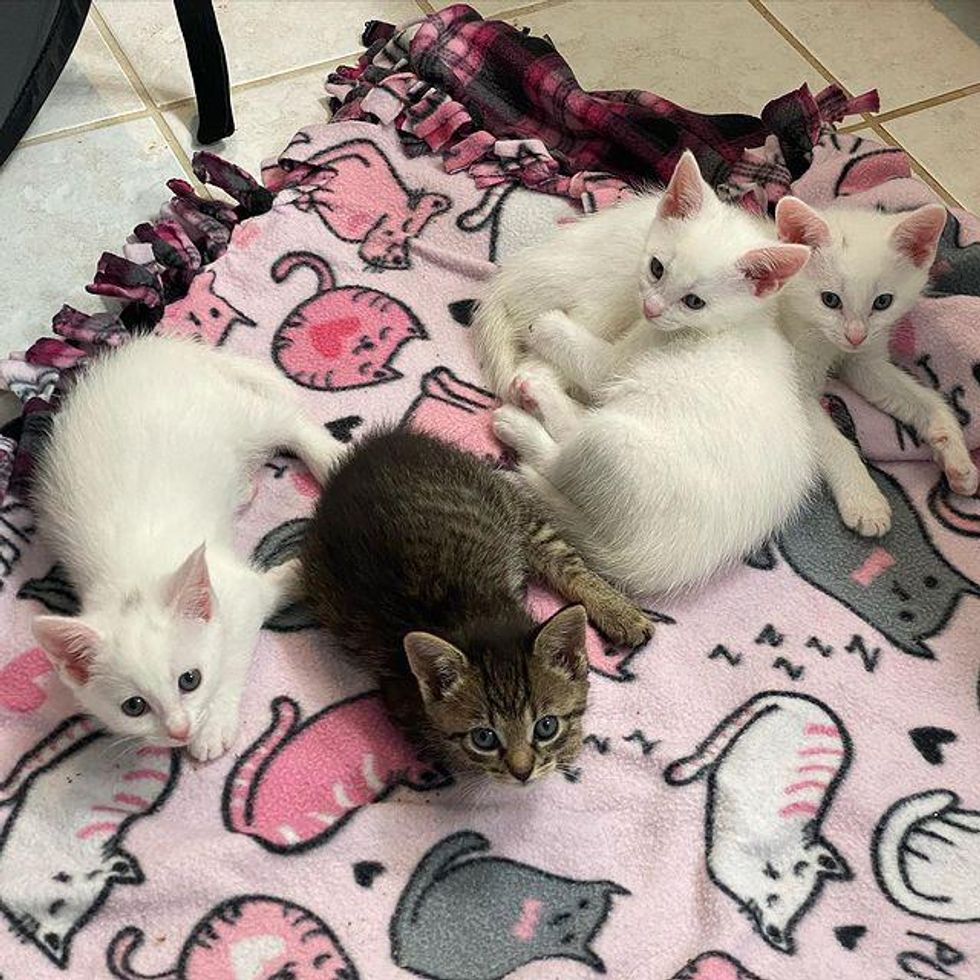 Littlefoot has blossomed into a gorgeous lady cat. She likes to show off her little nubby paw. "One of her favorite activities is playing on the stairs. She gets so excited to run up and down." 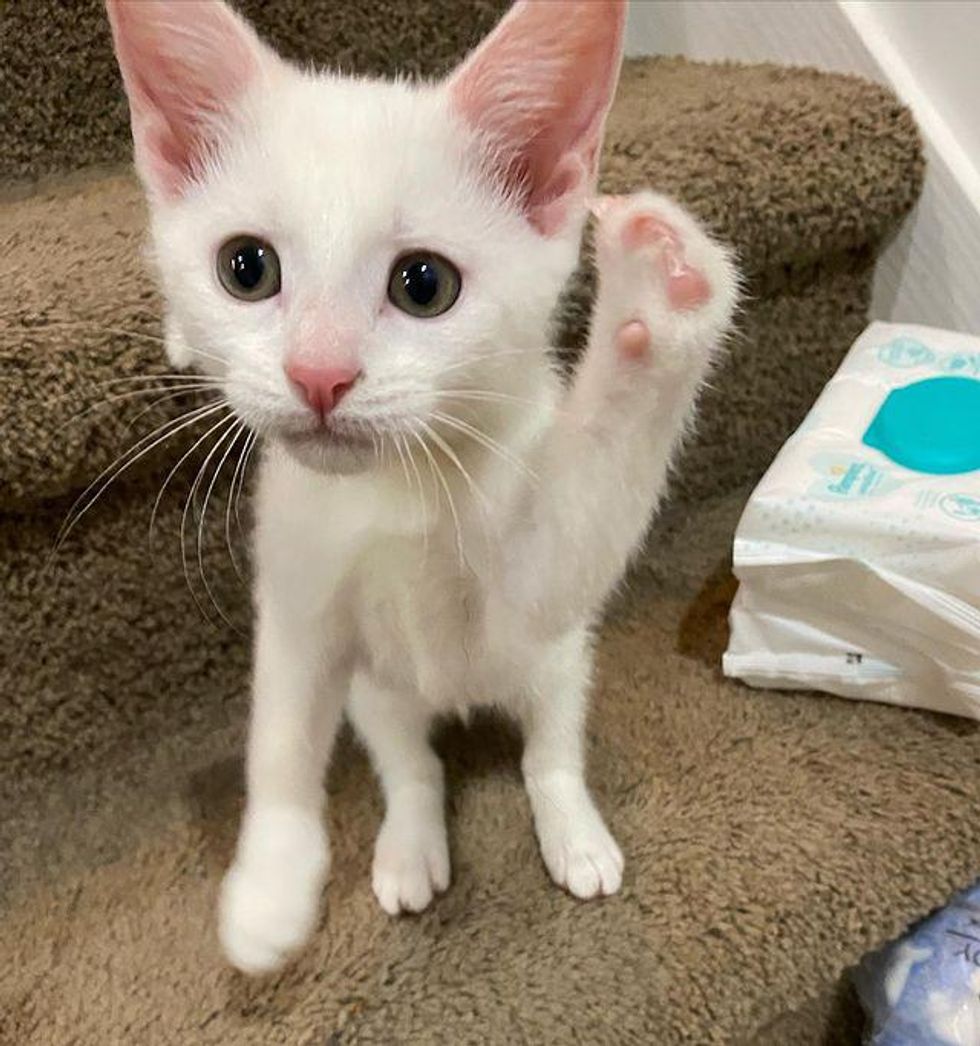 These little ones are having the time of their lives after a rough start. Ducky the tabby continues to be a little love-bug, offering everyone her signature cuddles. 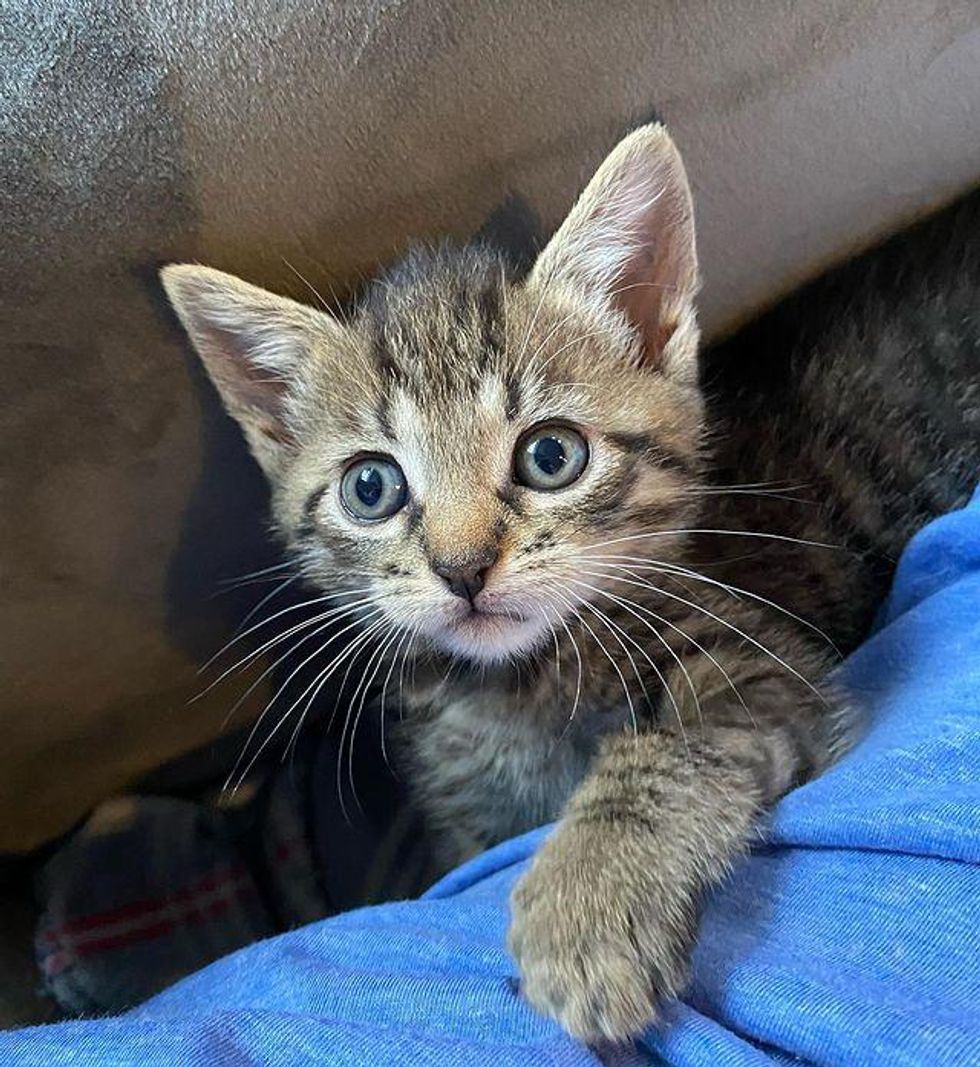 Related story: Cat Brings Kitten to Family She Trusts and Comes Back Next Day with Another One