Kelly the tabby was the smallest of eight kittens found outside, but she had quite the fighting spirit. 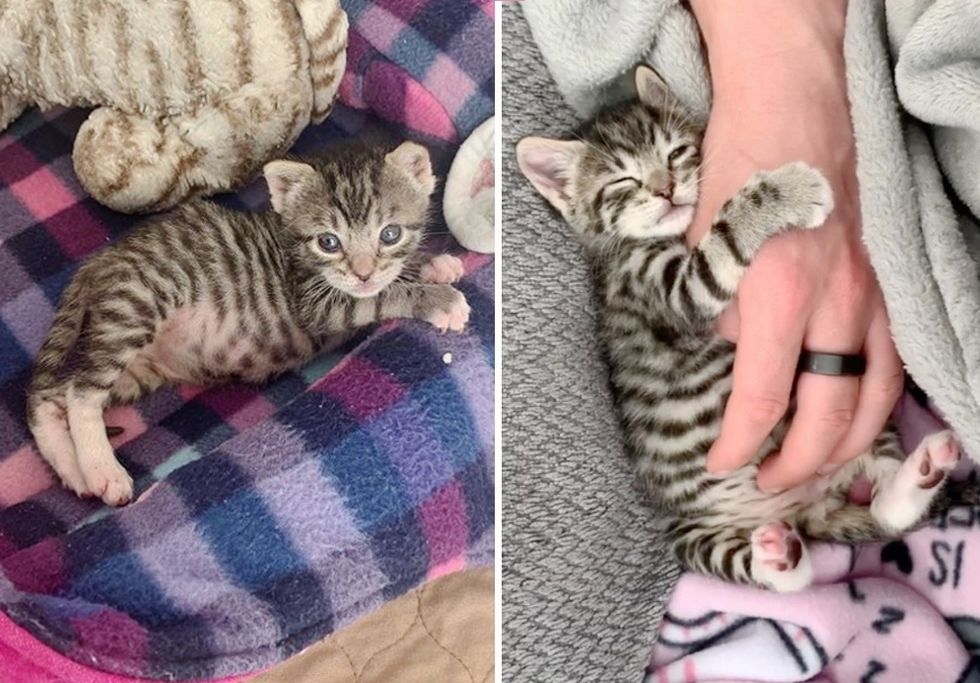 Two litters of kittens were found in a cat colony without their moms. They were brought to a local shelter for a chance at a better life. Jess Thoren, a foster volunteer based in New Jersey, stepped up to help and took all eight into her home.

She noticed that one of the kittens was much smaller than the rest. "I got the kittens when they were only one week old. Kelly (the tiniest tabby) was only 84 grams. She was very weak," Jess told Love Meow.

The palm-sized tabby had to be tube-fed every two hours as she didn't have the strength to eat from a bottle. Jess discovered two small wounds on her little body and immediately started treatment. The tiny fighter was brought back from the brink and started to perk up. 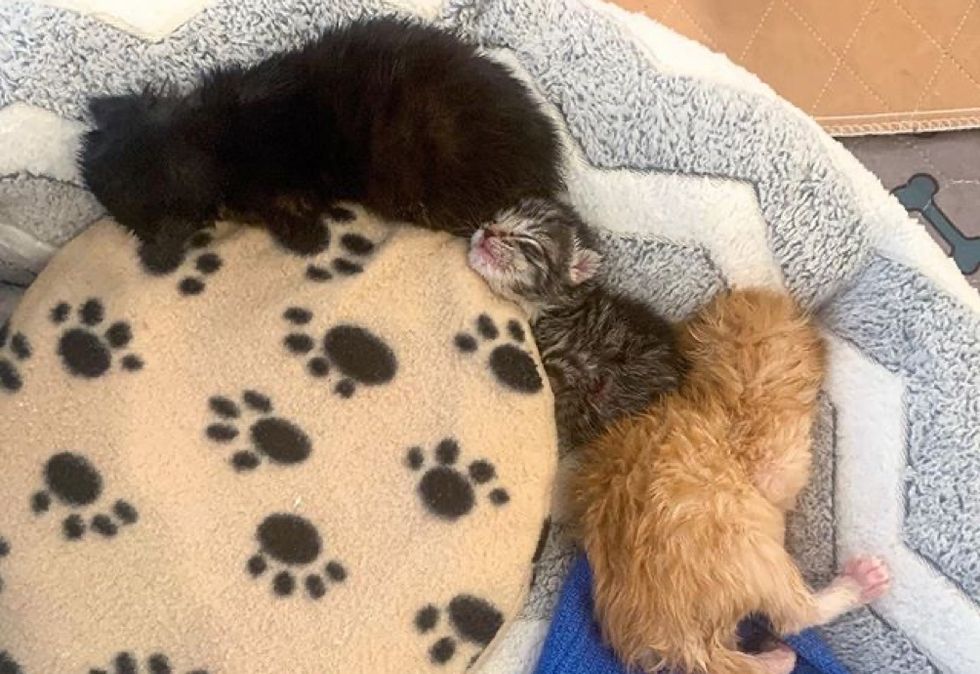 The warrior kitty was determined to get bigger and stronger. She was encouraged to eat with help from her foster mom, and she took long naps to help her little body heal.

Kelly's ginger brother Zack, who was almost twice her size, kept her company after every feeding. He cuddled up to her and even offered himself as her pillow.

After 10 days of round-the-clock care and many sleepless nights, the tabby girl finally hit 150 grams, the size of a one week-old. "That might not seem like the biggest accomplishment since all her siblings are at least 100 grams bigger than her, but I'm so proud of her," Jess wrote. 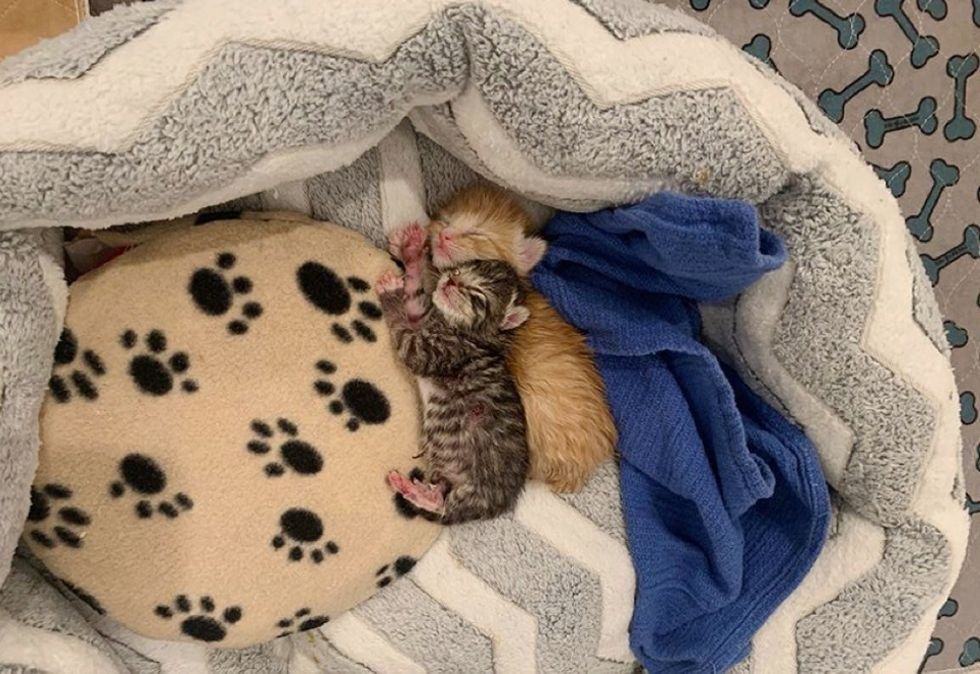 The little ball of fur continued to amaze her foster family with her incredible resolve. She became more active each day, and her appetite also improved.

As soon as Kelly was strong enough, she took to her bottle like a champ. She was significantly smaller than her siblings but she tried to match up to the bigger kitties in everything. 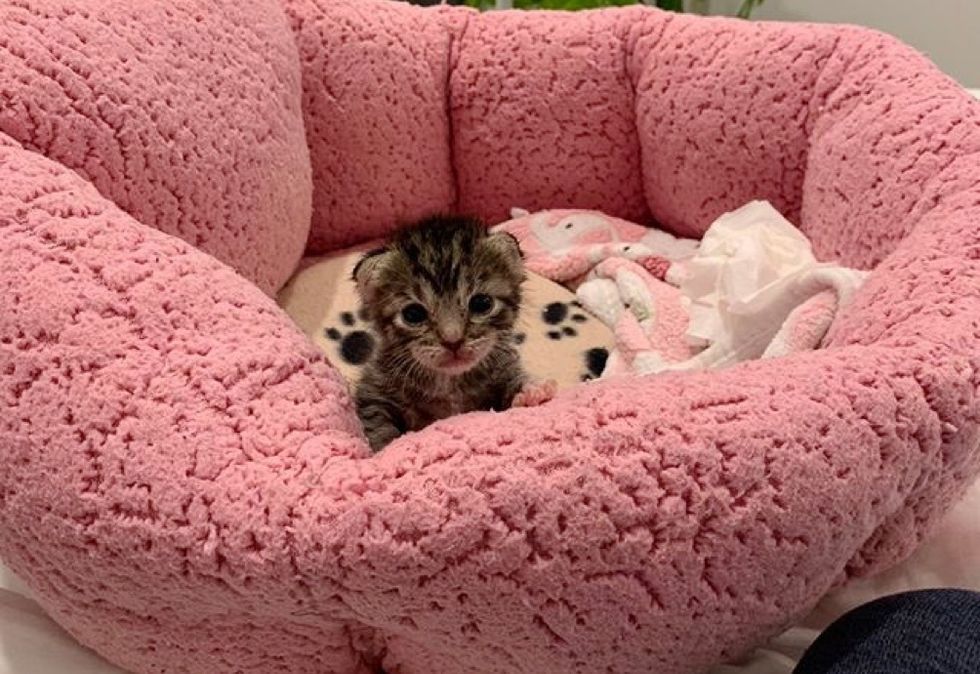 Over time, the little tabby healed up nicely. She continued to eat to her heart's content and would show off her round belly after every meal.

Kelly had a bit of delay in development and took extra time to figure out her coordination. While her siblings were running circles around her, she didn't mind the commotion and just wanted to join in the mayhem. 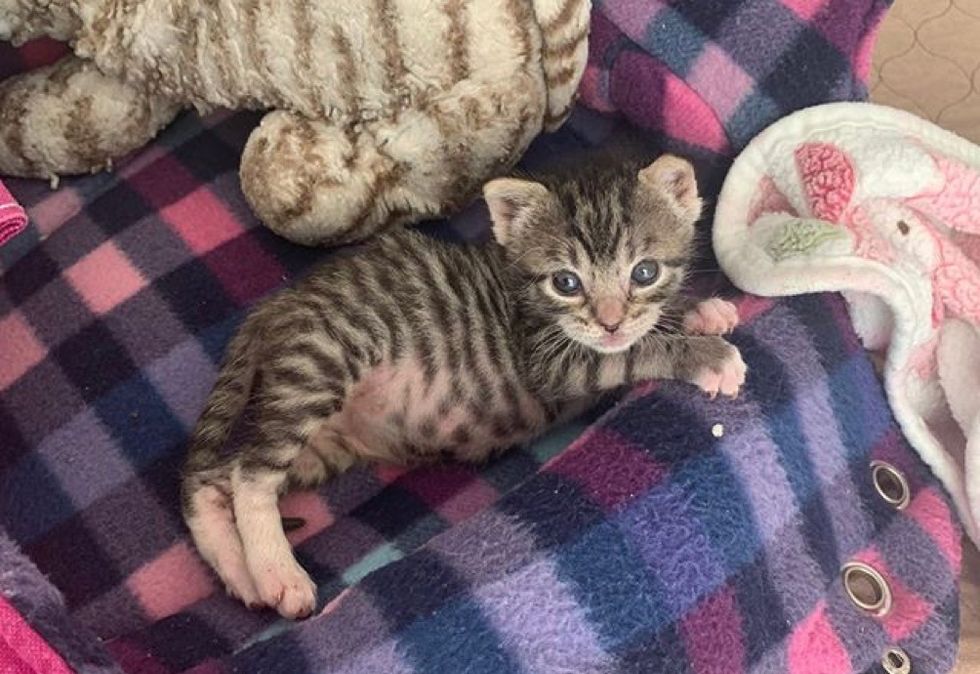 "Even though Kelly was small, she tried so hard and wanted to play with the bigger kittens," Jess shared with Love Meow.

She is thriving in foster care and reaching one milestone after another. Nothing makes her happier than getting some belly rubs and cuddles at the same time. 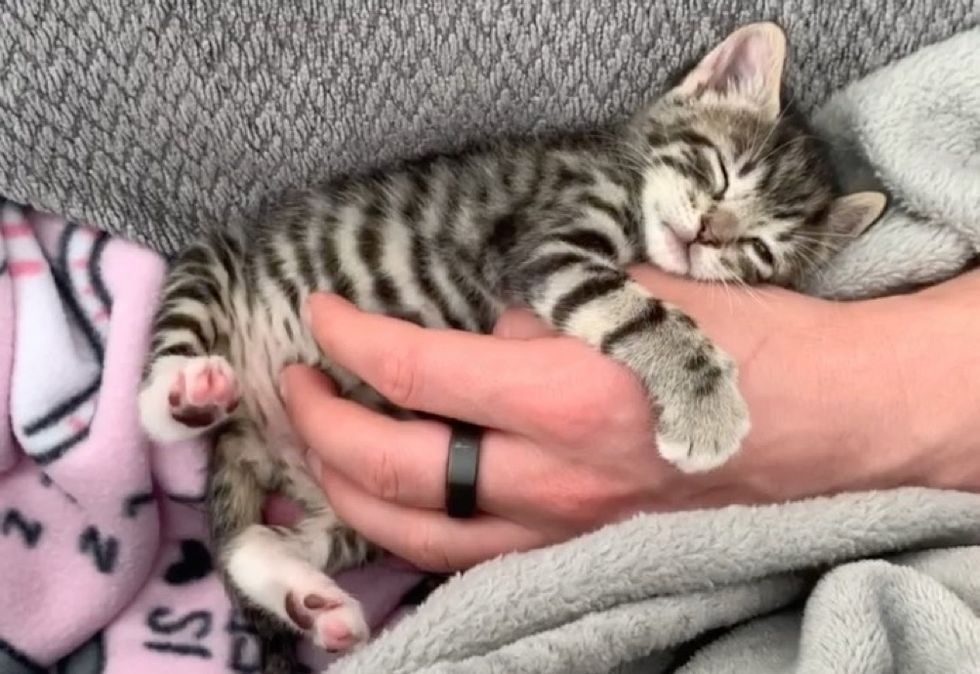 Now that she is eating on her own, she is growing much faster, catching up in size.

Watch Kelly the kitten in this cute video:

Kelly, the smallest tabby out of the bunch, loves to tag along with bigger kitties, learning the ropes. 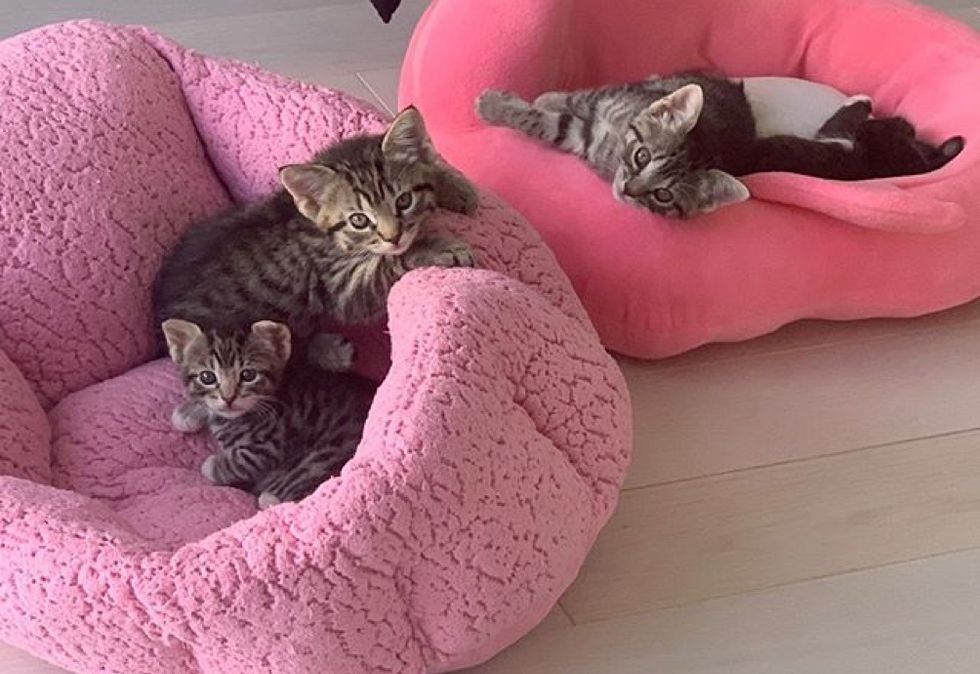 What she lacks in size, she makes up for in personality. The feisty kitty loves to wrestle with her siblings even when they try to get some sleep.

When Kelly wants to play, she won't take no for an answer. "She's definitely a girl that knows what she wants and gets it." 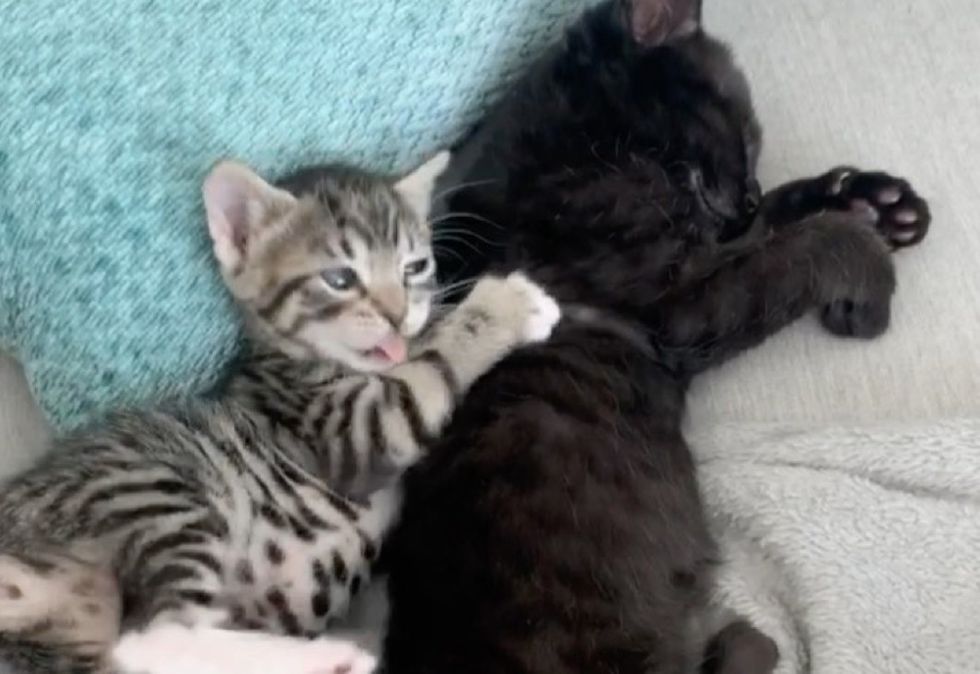 The brave little kitty has come a long way.

She's still the runt of the litter, but she has a mighty personality and the heart of a lion. 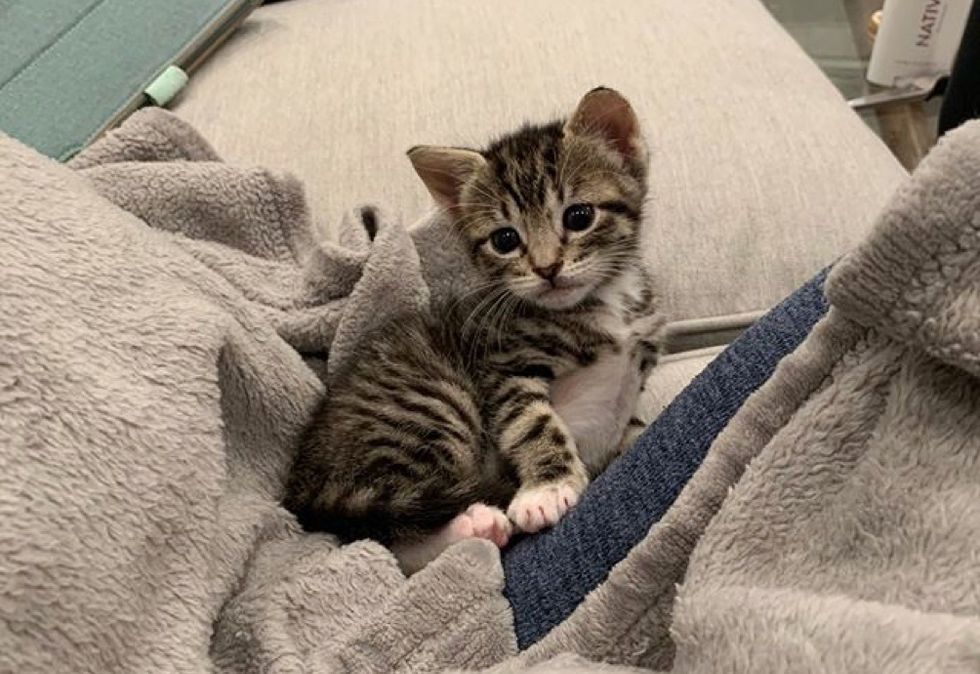 With a loving foster family, the palm-sized kitten has blossomed into a healthy, happy tabby girl.

Kelly was so small when she first came to her foster home. 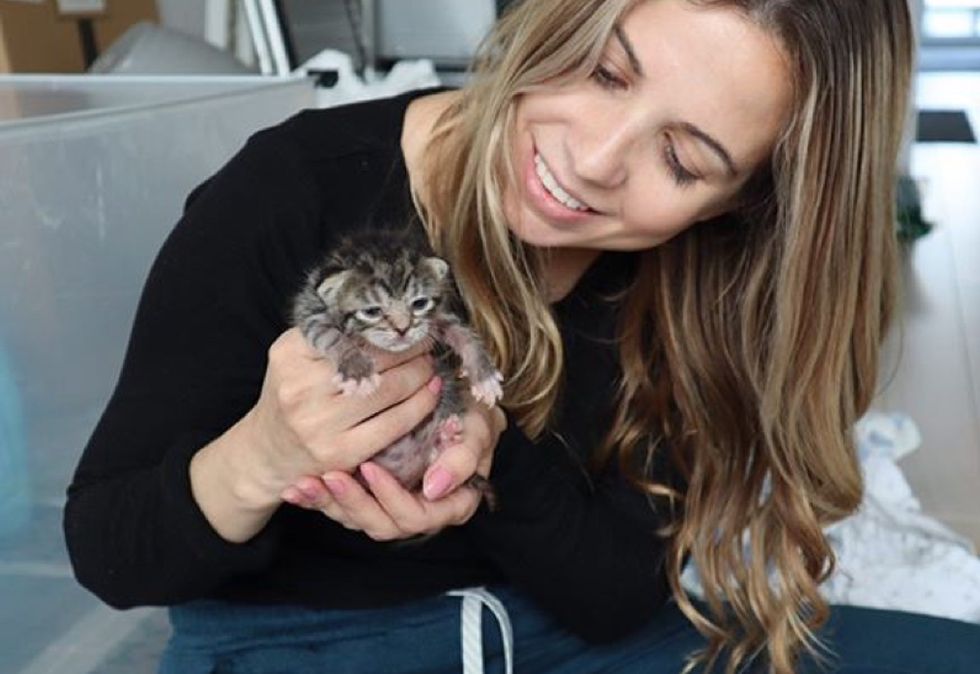 Look at her now! She can't wait to grow big and find a place of her very own. 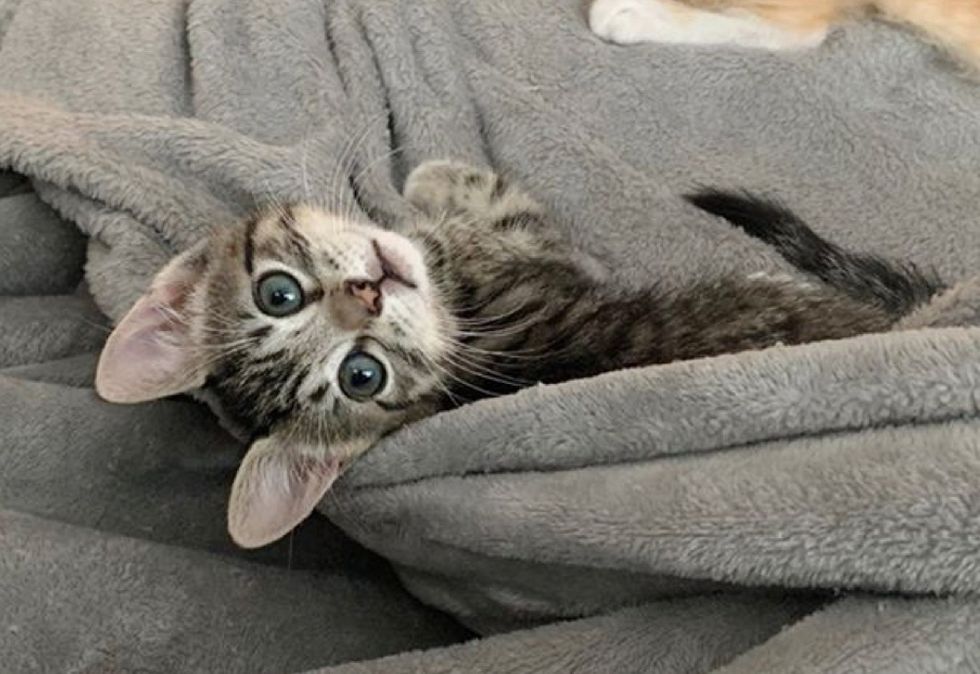