Three feline brothers came to a vet clinic in Garland, Texas without a mom and a home, so the staff took them in and the kitties became family.

When the trio first arrived at 6 weeks... 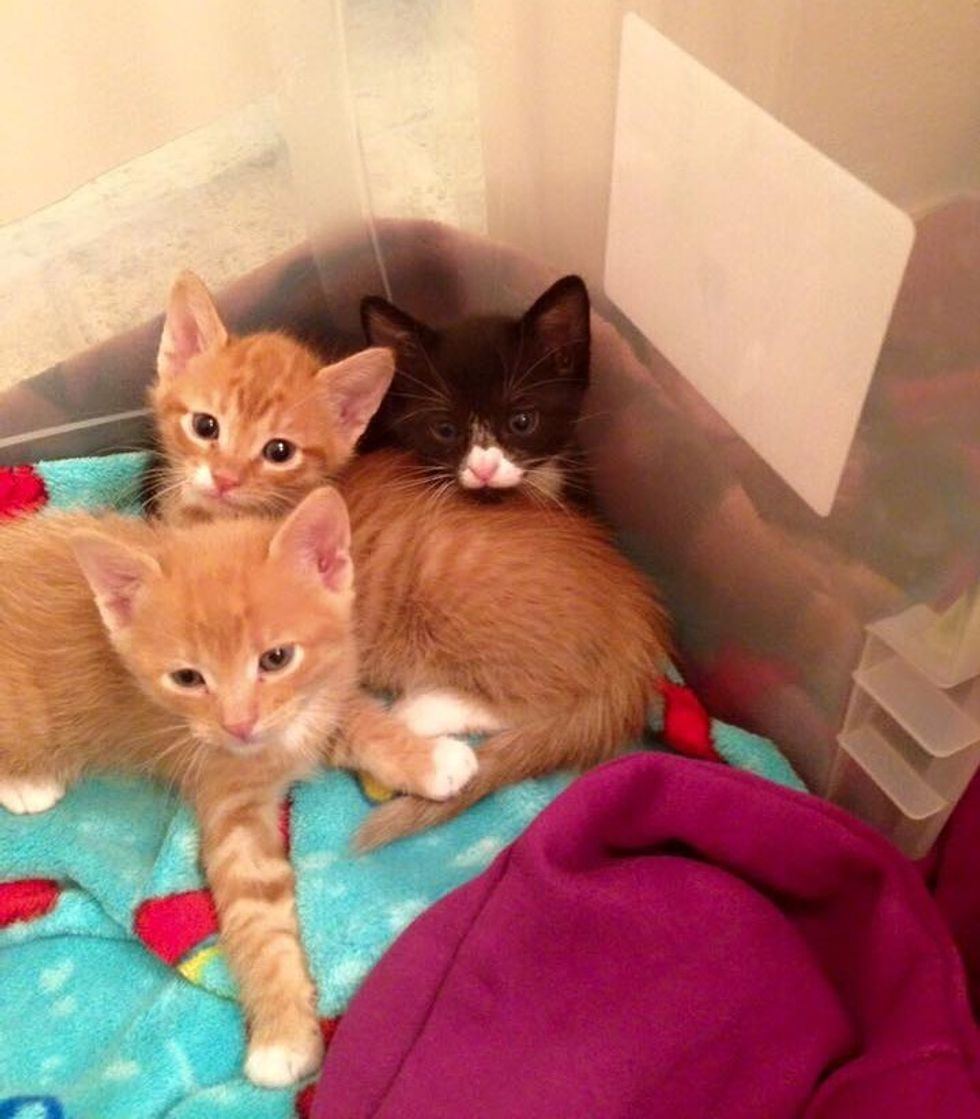 "I opened my practice in February 2013. This is my second practice to own, and I've always had clinic cats, so I was on the lookout for siblings," Dr. Rick Hamlin of Mercy Animal Clinic told Love Meow.

In March 2013, they received a call about three 6-week-old kittens found under a deck by a local resident. The little ones were scared at first, but as soon as they realized their human friends weren't so bad the trio smuggled their way into their hearts. 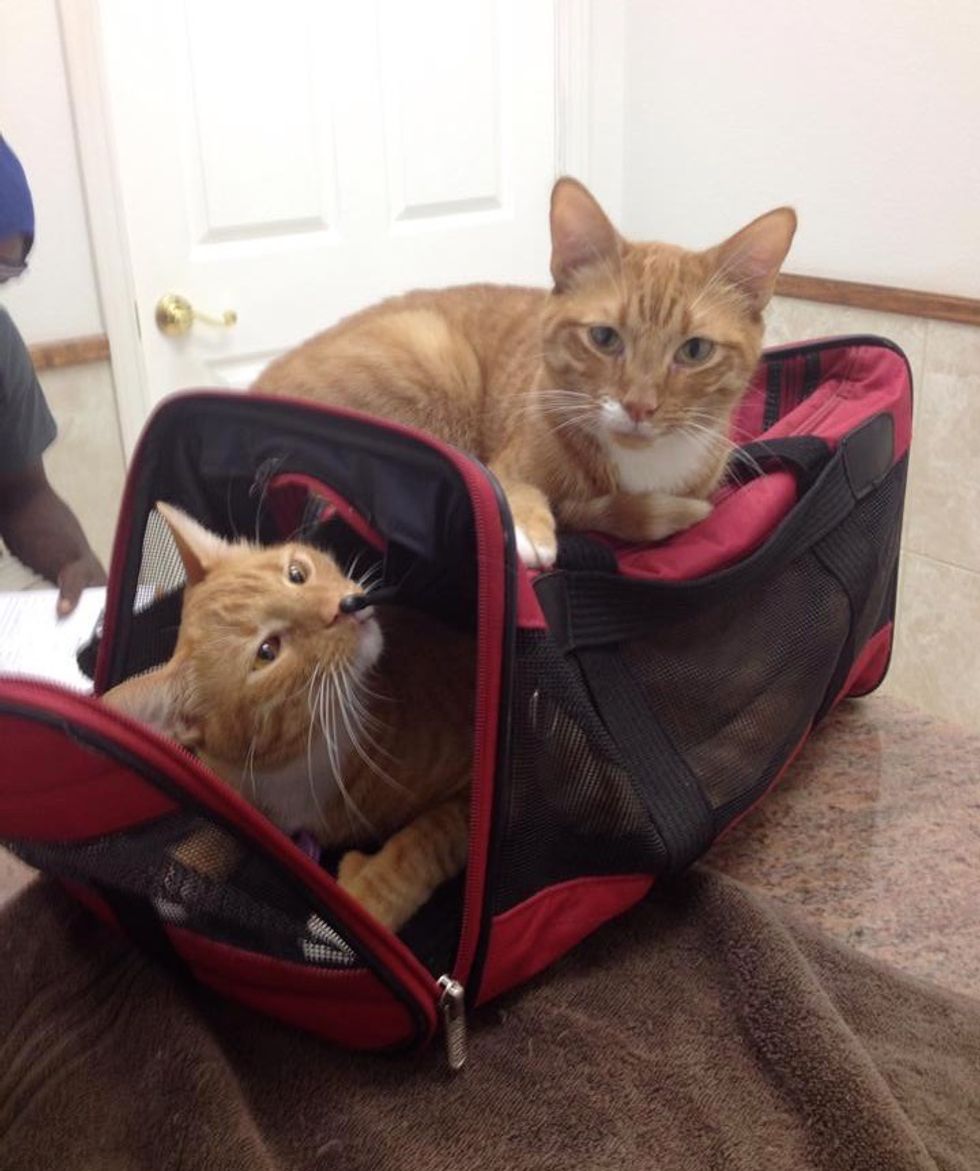 "Every cat carrier left here goes through rigid testing before being returned to the owner."Courtesy: Mercy Animal Clinic

"Aqua Teen Force was popular then and I was going to name them Fries, Shake, and Meatwad, but my 10-year-old daughter said no.

"She said if they were going to be office cats they needed office names, so she chose Larry, Roger, and Carl." 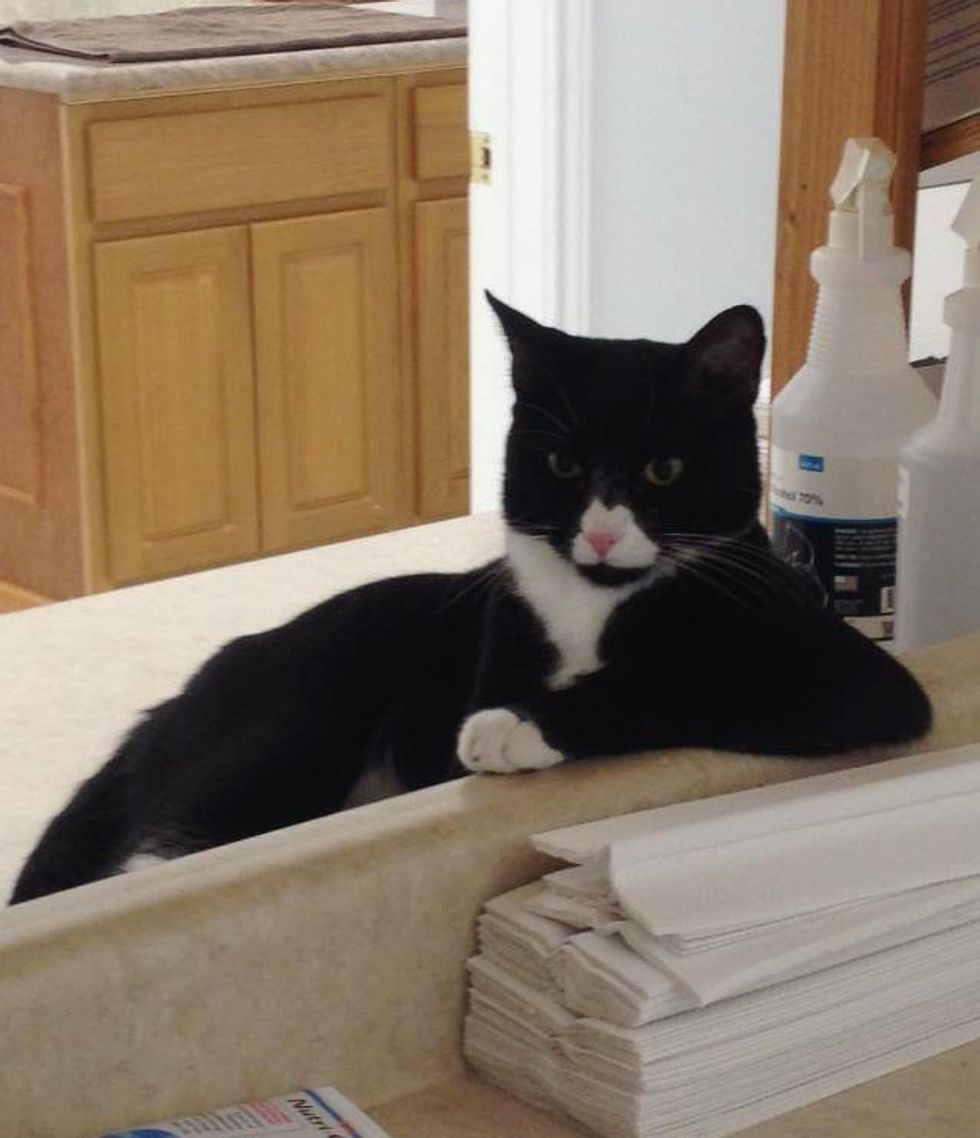 Though they are from the same litter, each kitty has a different personality. "Larry is the most normal, Roger is a chunk who likes donuts, and Carl is the resident bad boy," Dr. Hamlin said.

Sometimes they crawl into women's handbags. "Larry occasionally steals things out of purses." 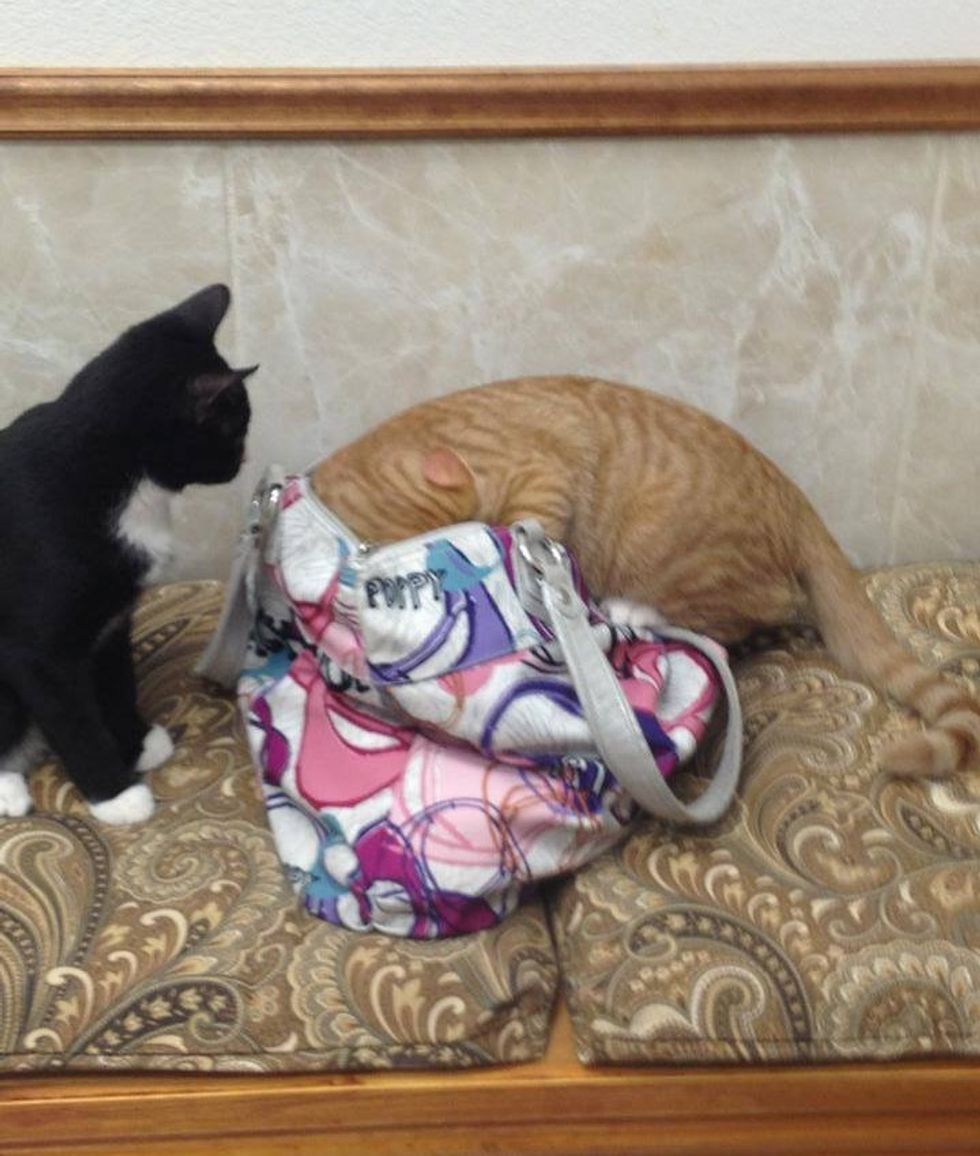 "They love to crawl in other cats carriers, and just see who's come in that day," Dr. Hamlin told Love Meow.

"They're very inquisitive and not afraid of dogs or other cats. They will check out rabbits, mice, guinea pigs and such without hurting them." 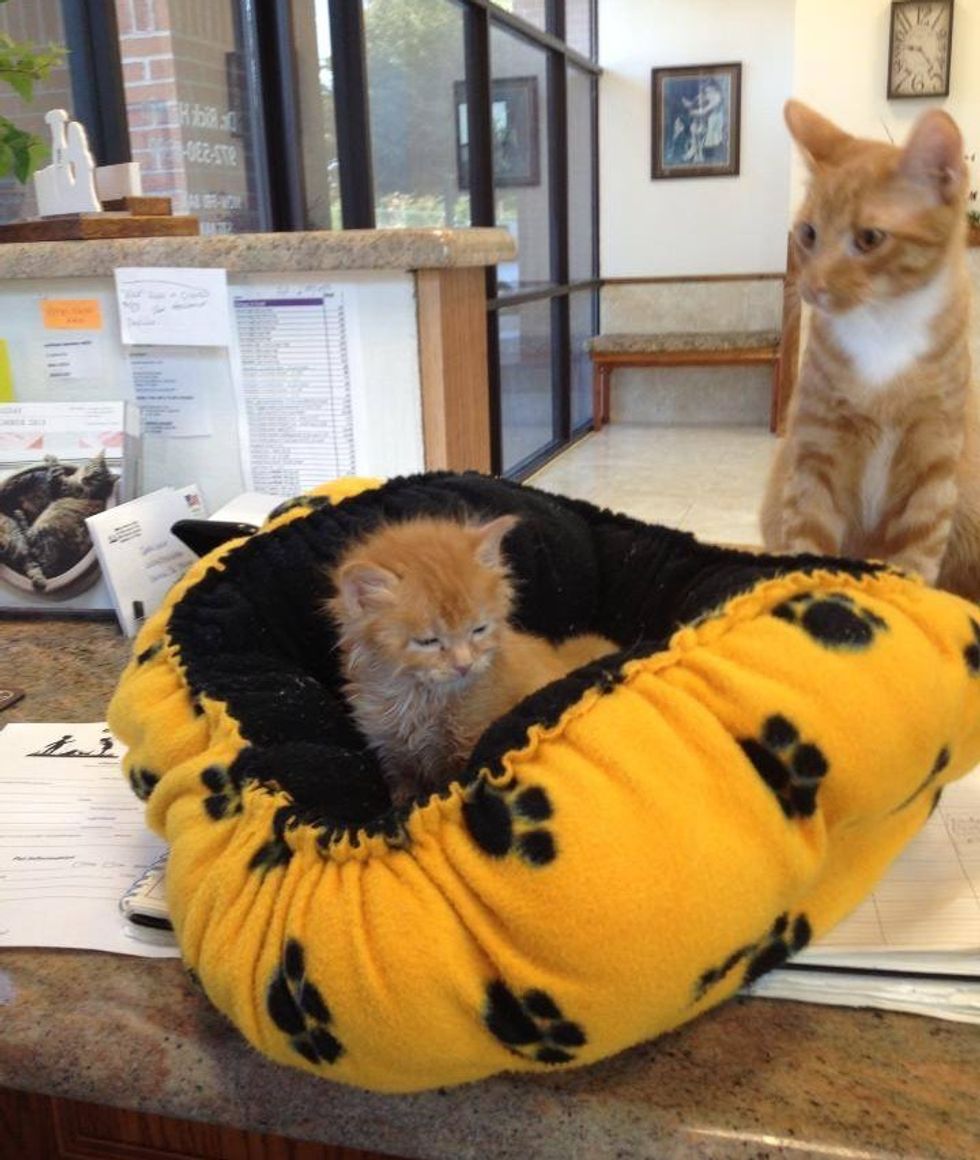 "Often Larry or Roger will be sleeping on an exam table while I'm examining a patient...and sleep through the entire procedure."


Roger trying to calm a patient down with a cuddle. 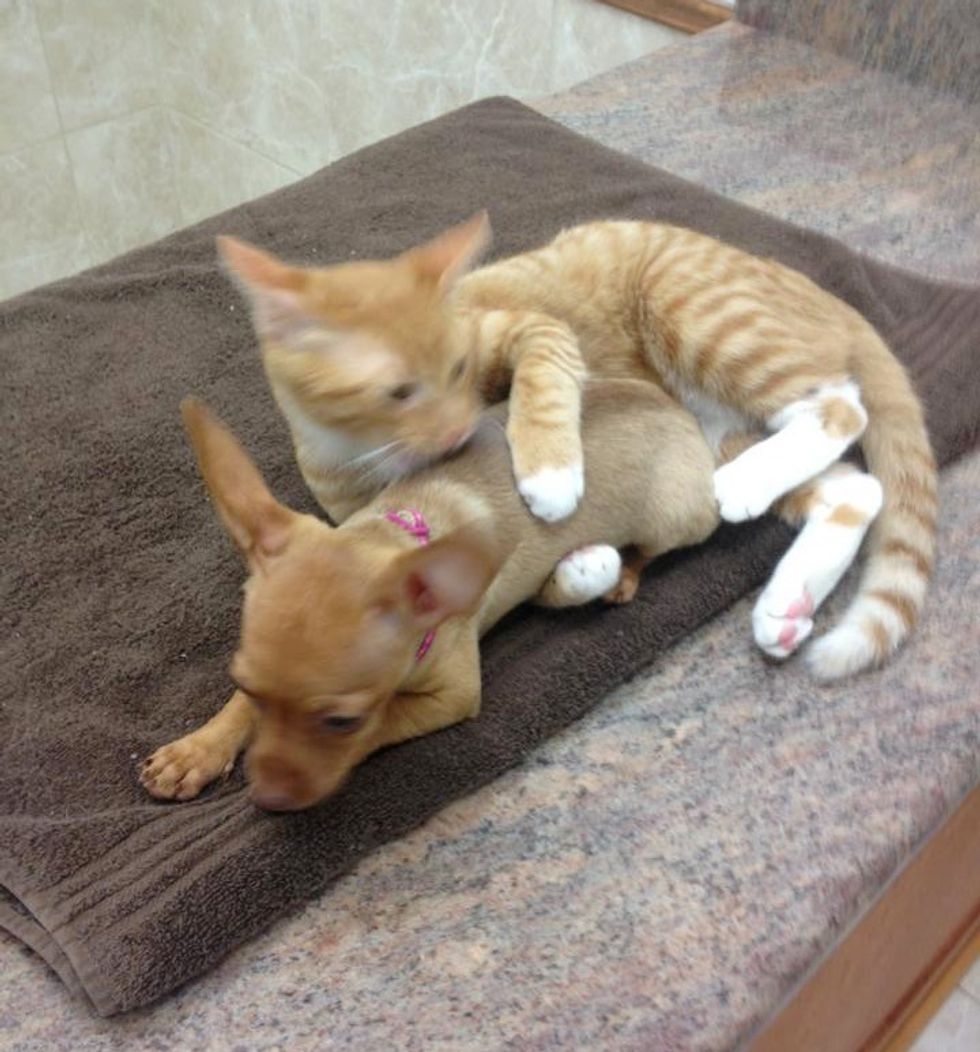 Buddy the parakeet checks out his new condo while Carl welcomes him to the neighborhood. 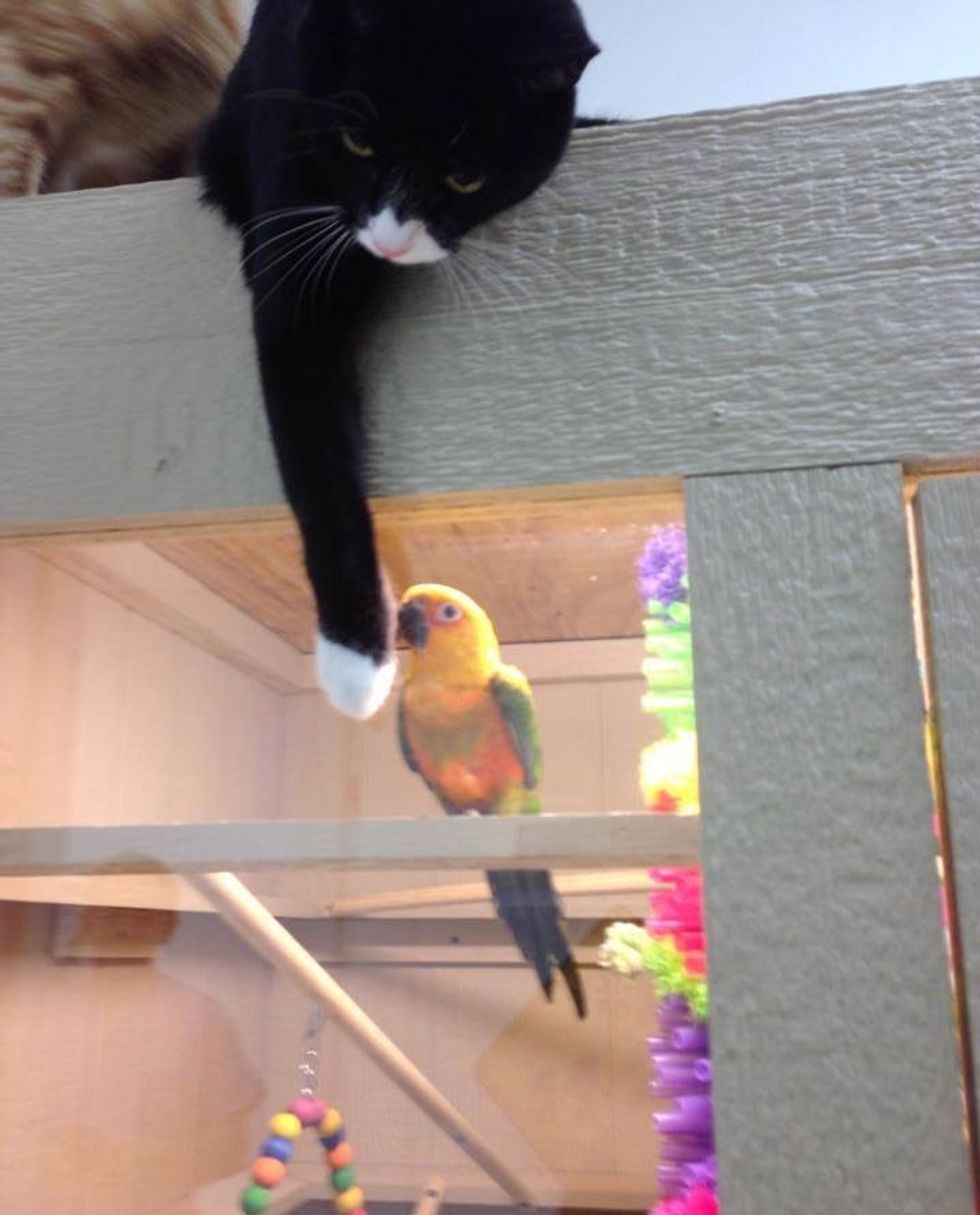 Amanda the dog and Carl share an afternoon nap together. 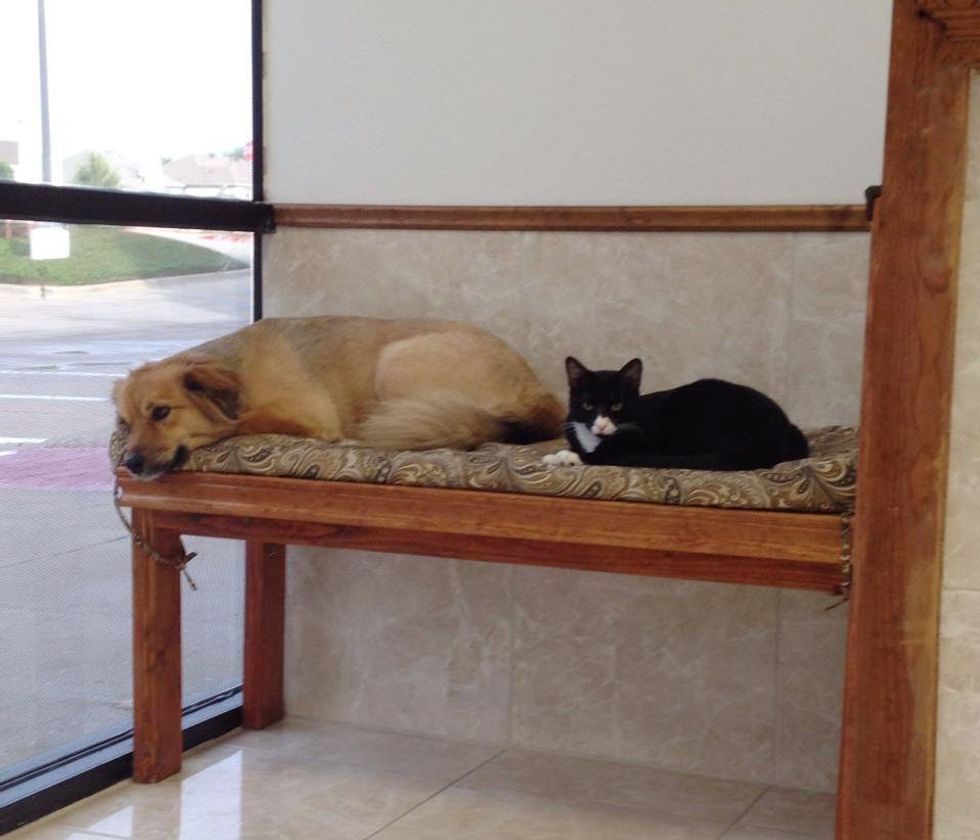 "He's quite the comforter. That is the sweetest thing I've seen in a long, long time." 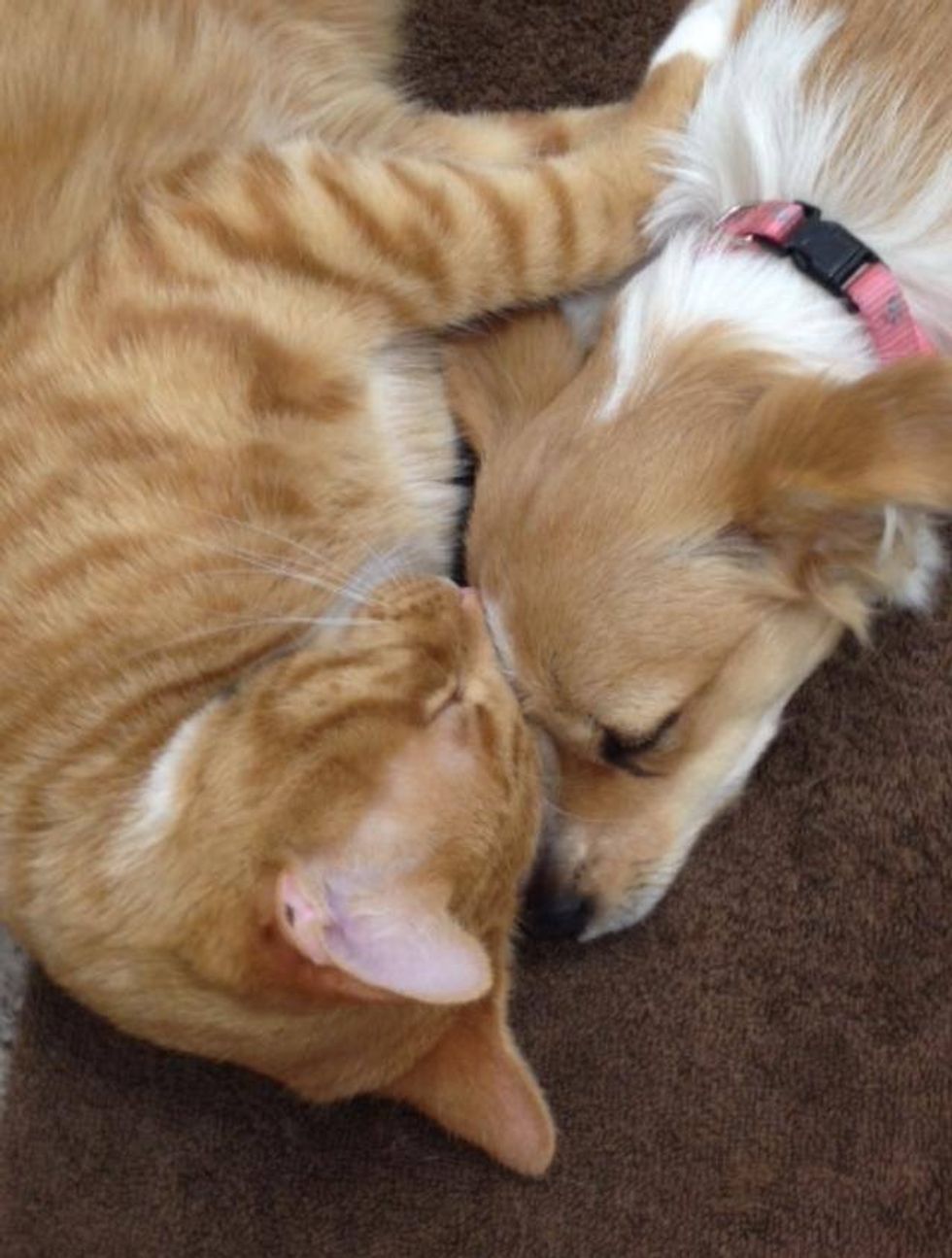 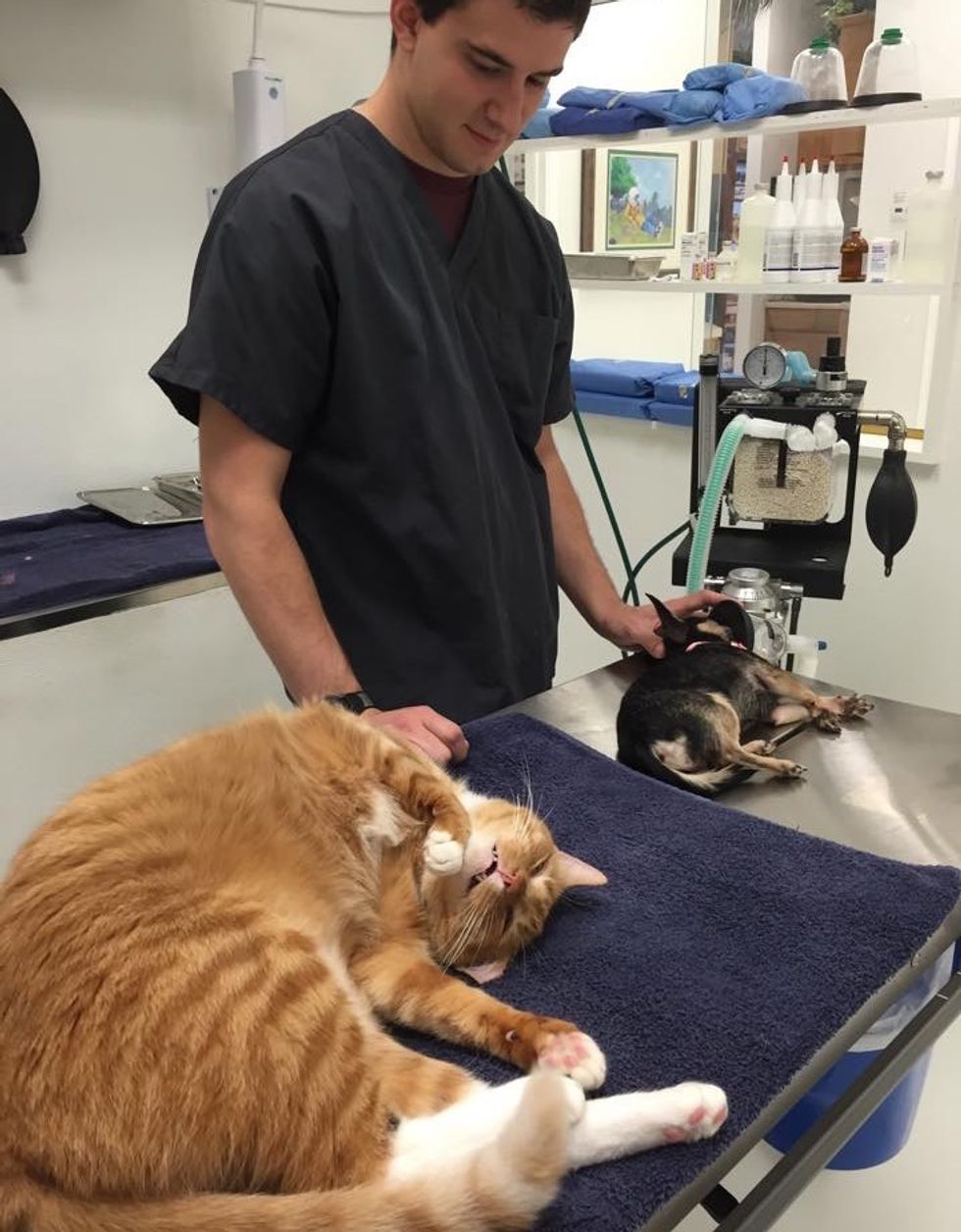 Roger decides to sneak a snack from the patients' food bowl.

"He is totally shameless." 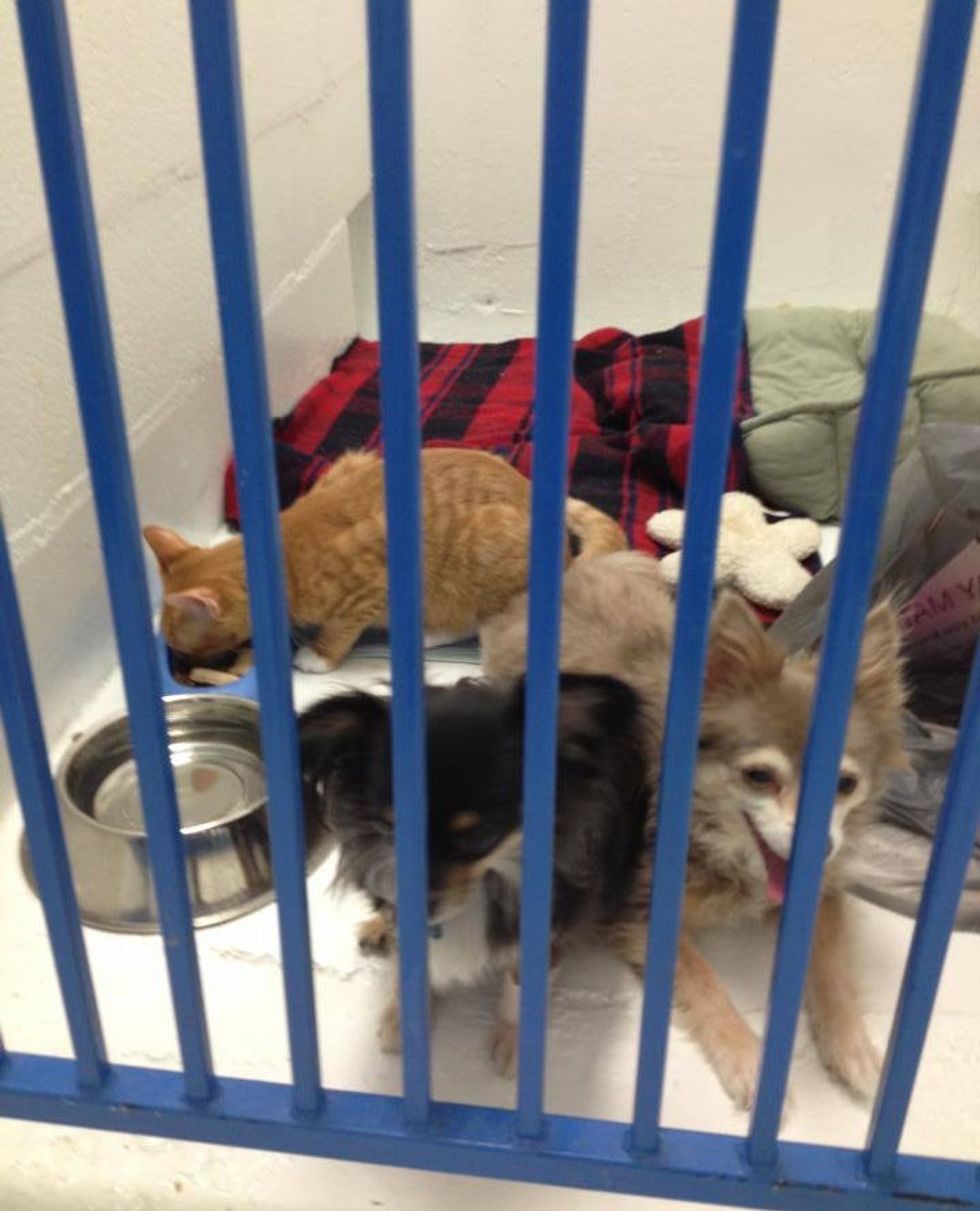 Carl hops over to the pharmacy to lend a helping paw. 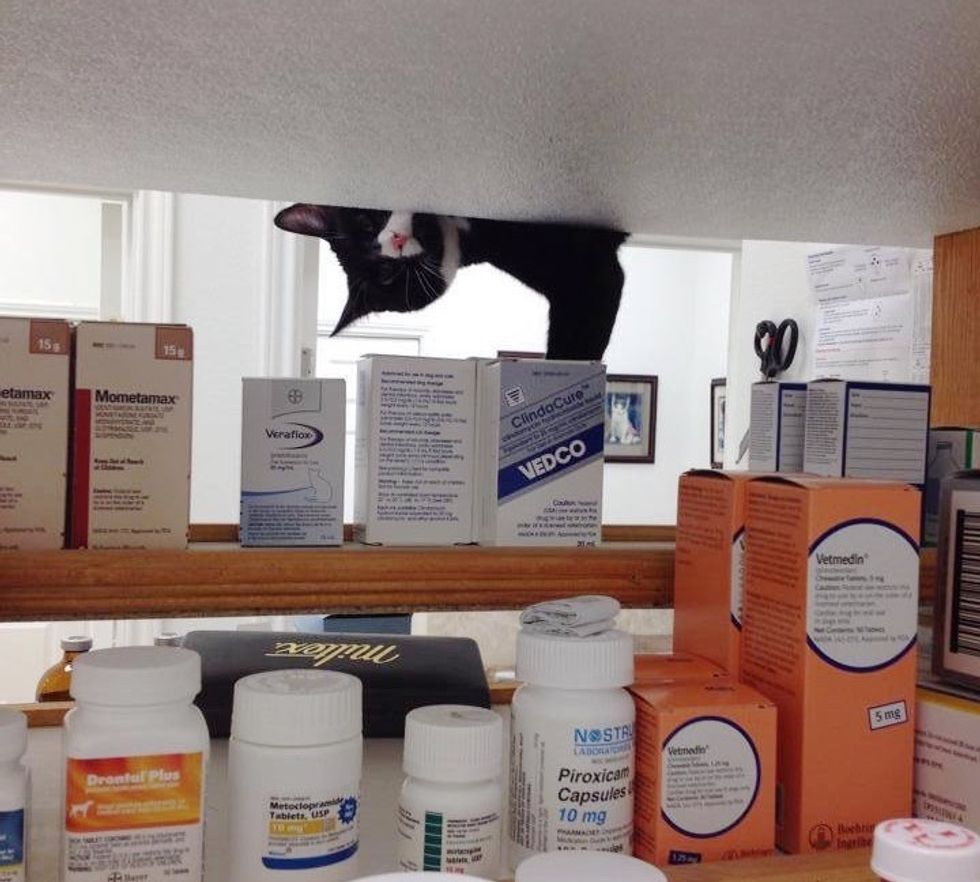 It's clear who really runs the clinic. 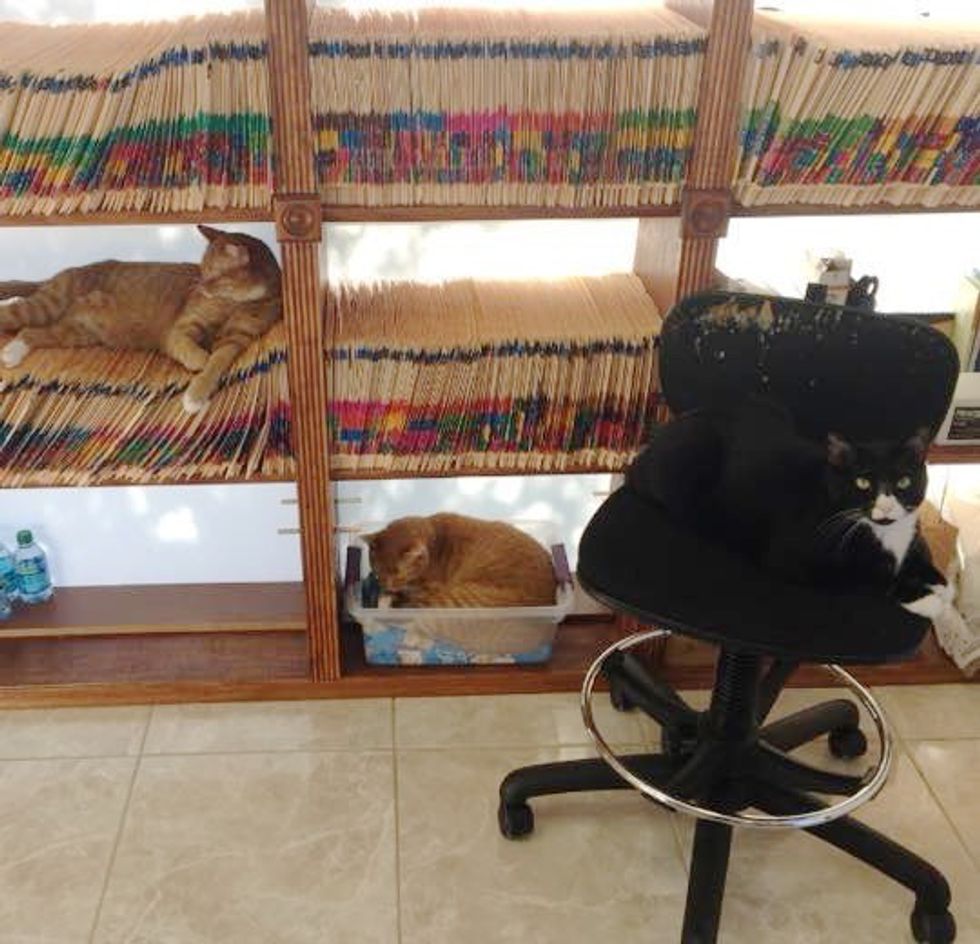