A kitten was found underneath a jacuzzi, fighting to live. He was the only survivor of his litter and found without a mother. 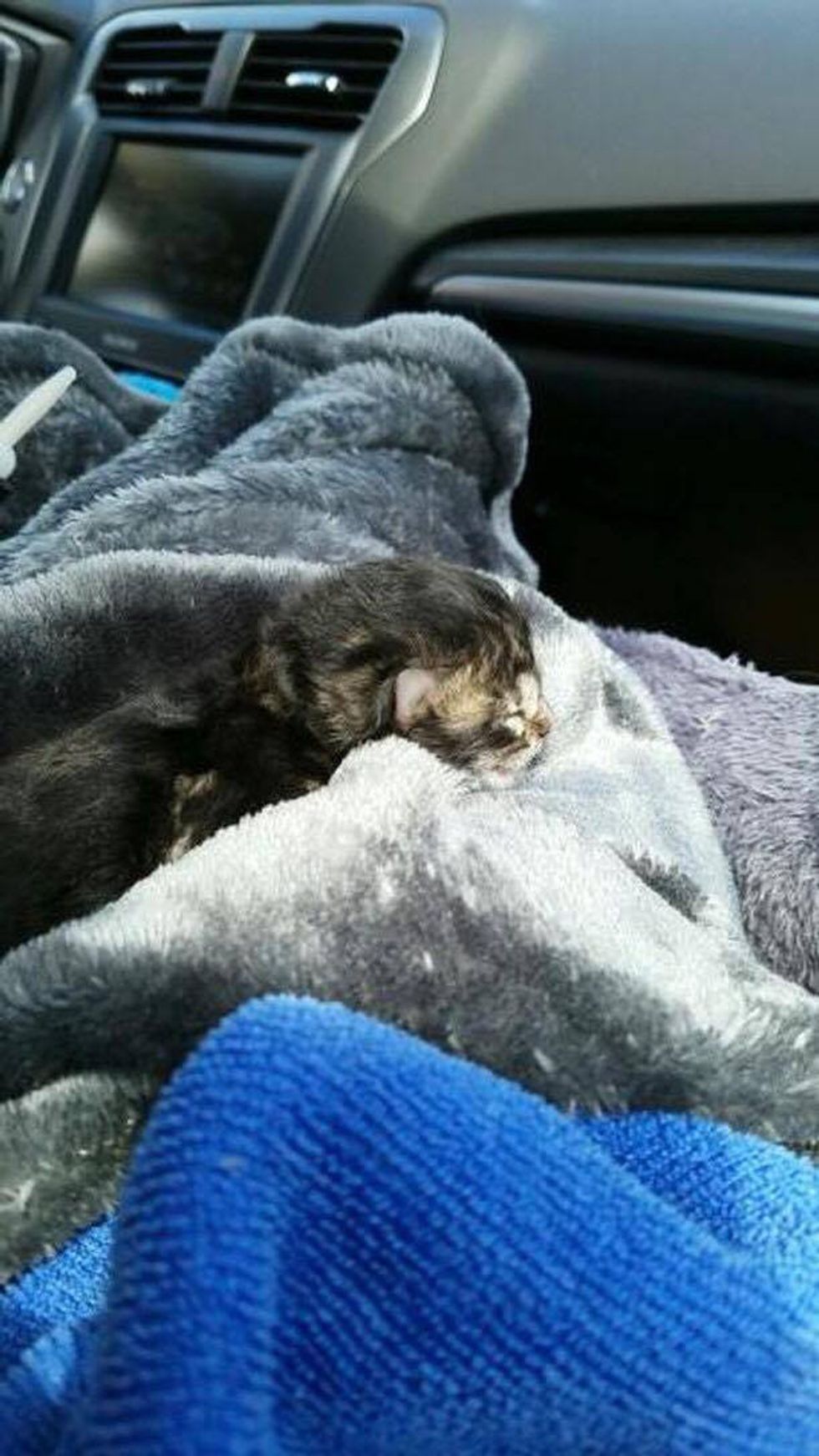 A young woman received a call from her coworker about a litter of kittens she heard from underneath a jacuzzi in her backyard.

"She heard faint meows but couldn't get to them. My mom and I got a trap and we went over to get them all. To get to the kittens we had to break the wooden siding off of the jacuzzi, and when we did we found only one kitten alive," the young woman told Love Meow.

"We named him Jack for finding him in a Jacuzzi. We had kitten milk and a heating blanket ready for him in the car. He was only about three days old." 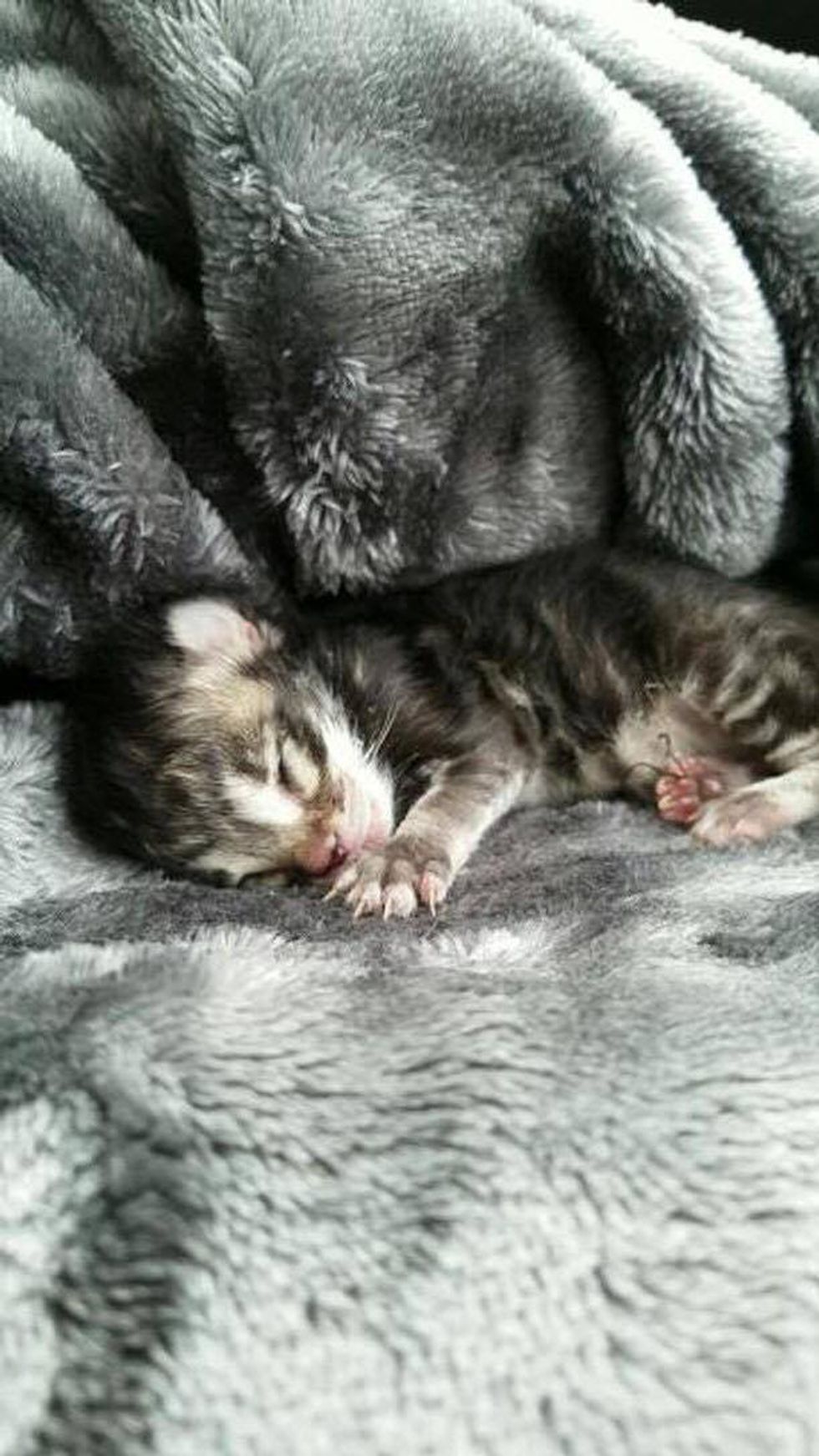 They went back to try to look for the mother cat. After a few days of waiting, they got the mom but when they tried to reintroduce her to Jack, she didn't show any interest in nursing or caring for the kitten.

The family stepped in to help. They got the mama spayed and because she is a feral cat, they released her onto their property so they could continue caring for her. "She doesn't get near people but she has been seen from far away and she comes and eats food every day." 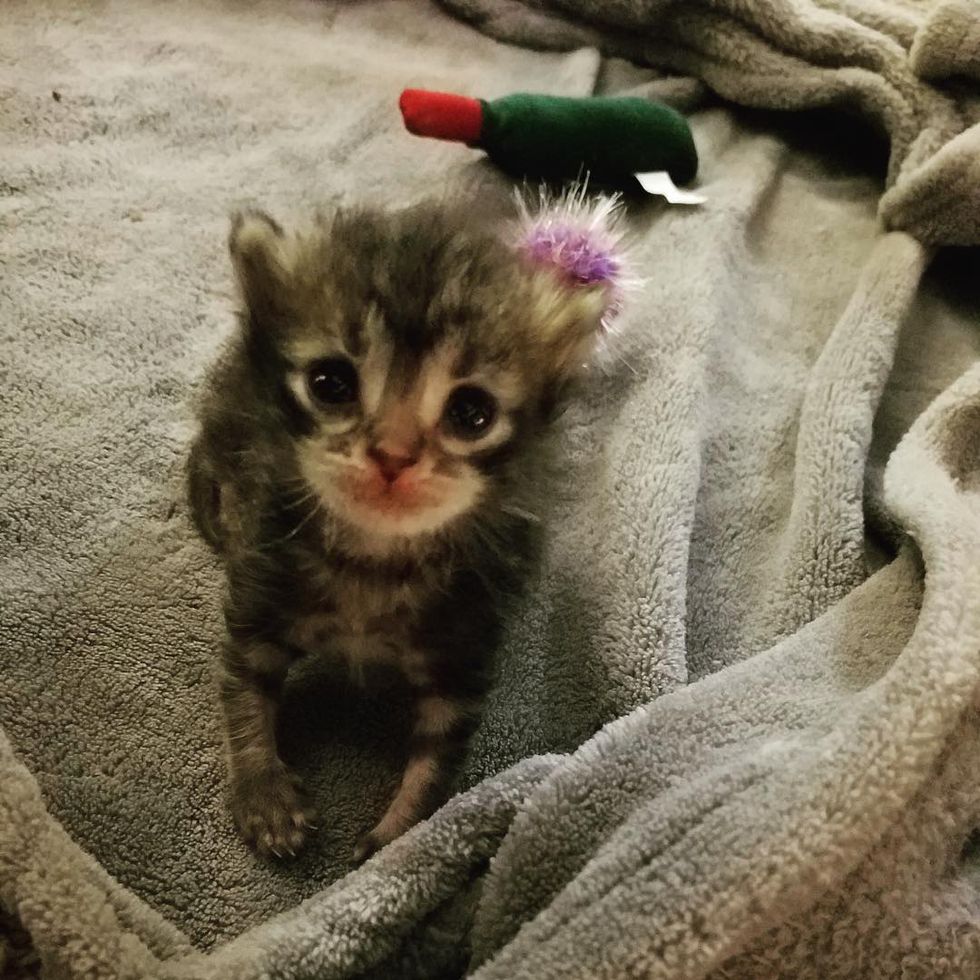 Tiny Jack came with a severely infected leg. He had to be on many medications and receive physical therapy.

"Jack's will to live is insane. I have bottle fed many other kittens but he is one of the strongest. They told me his chances of survival were low, and I knew it was true," she told Love Meow. 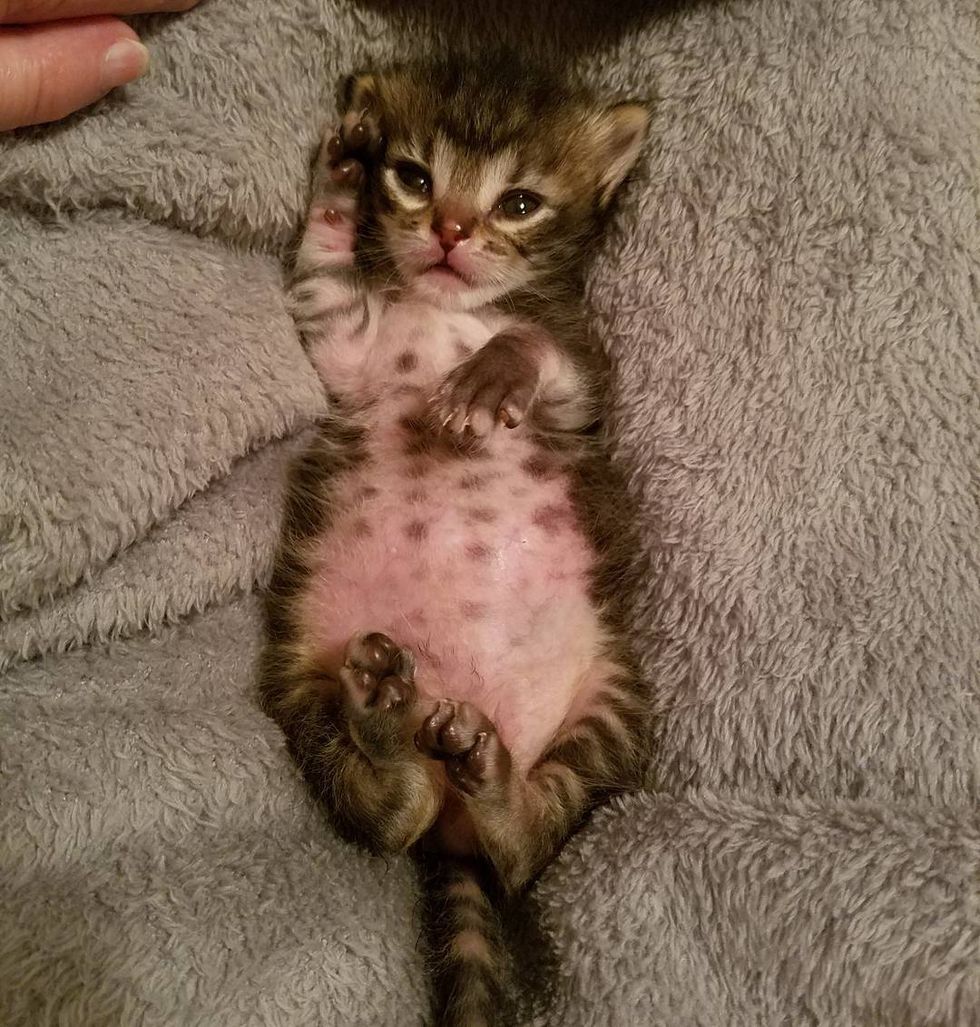 But she refused to give up on Jack and began to seek a second opinion from two other animal hospitals.

"I took him to a third cat hospital. He got a penicillin shot, take-home antibiotic shots for me to give twice daily, a silvadene cream for his leg... the list goes on. They then opened and debrided the wound with instructions for me to do all the same things two or more times daily." 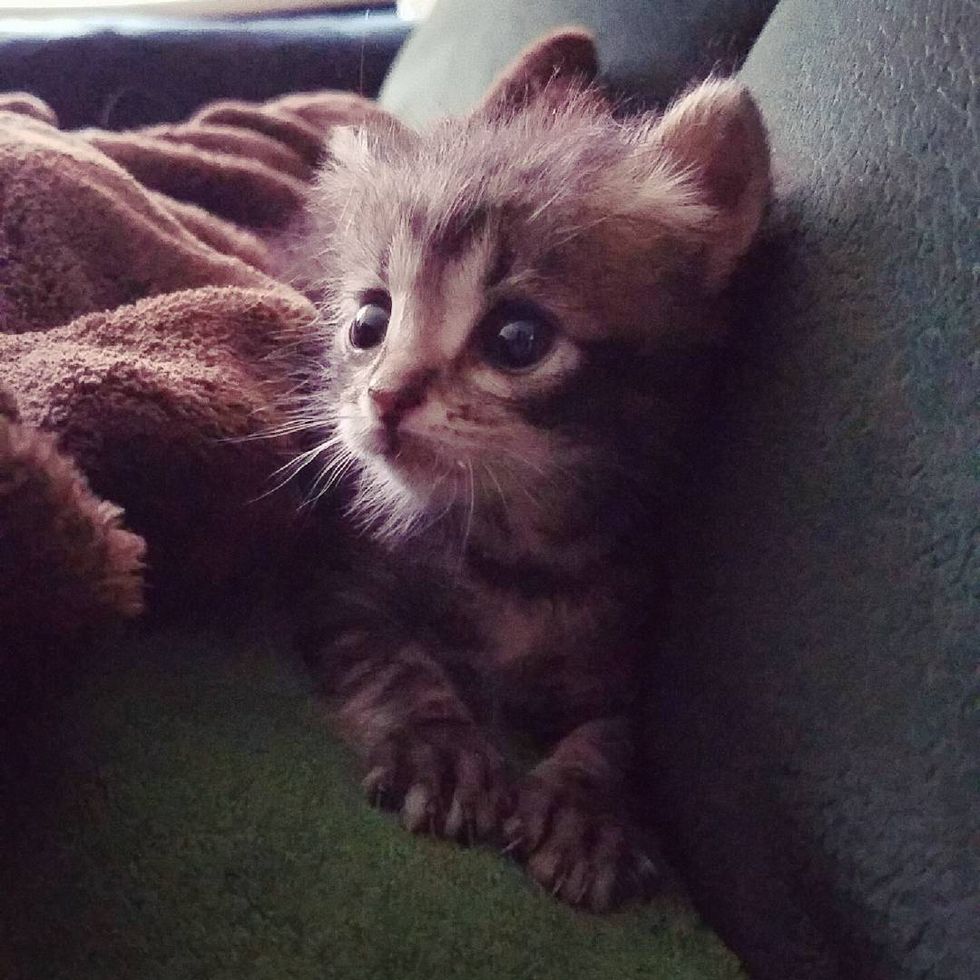 There are risks of applying these medications on a tiny kitten. "But it was either that or letting the infection turn into a full blown blood infection—sepsis."

She was determined to try everything she could to save Jack. 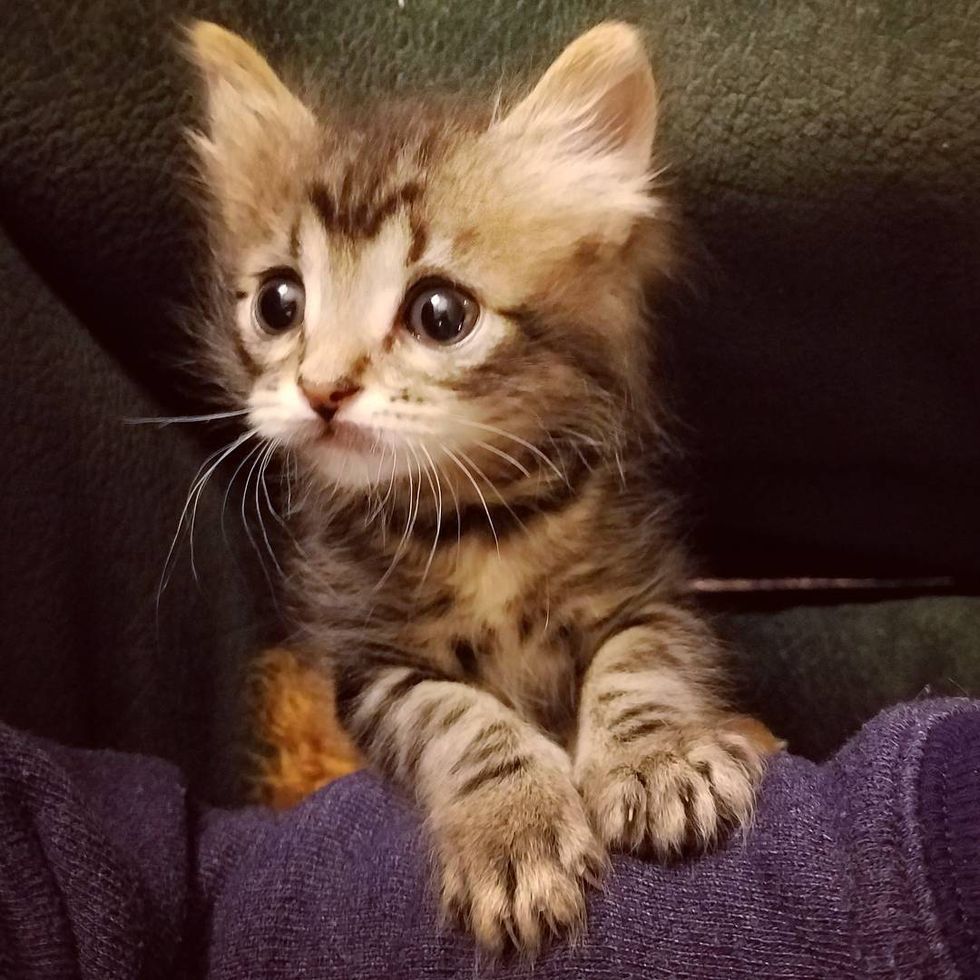 "A few days later he showed improvement. He never lost his appetite during the whole thing. 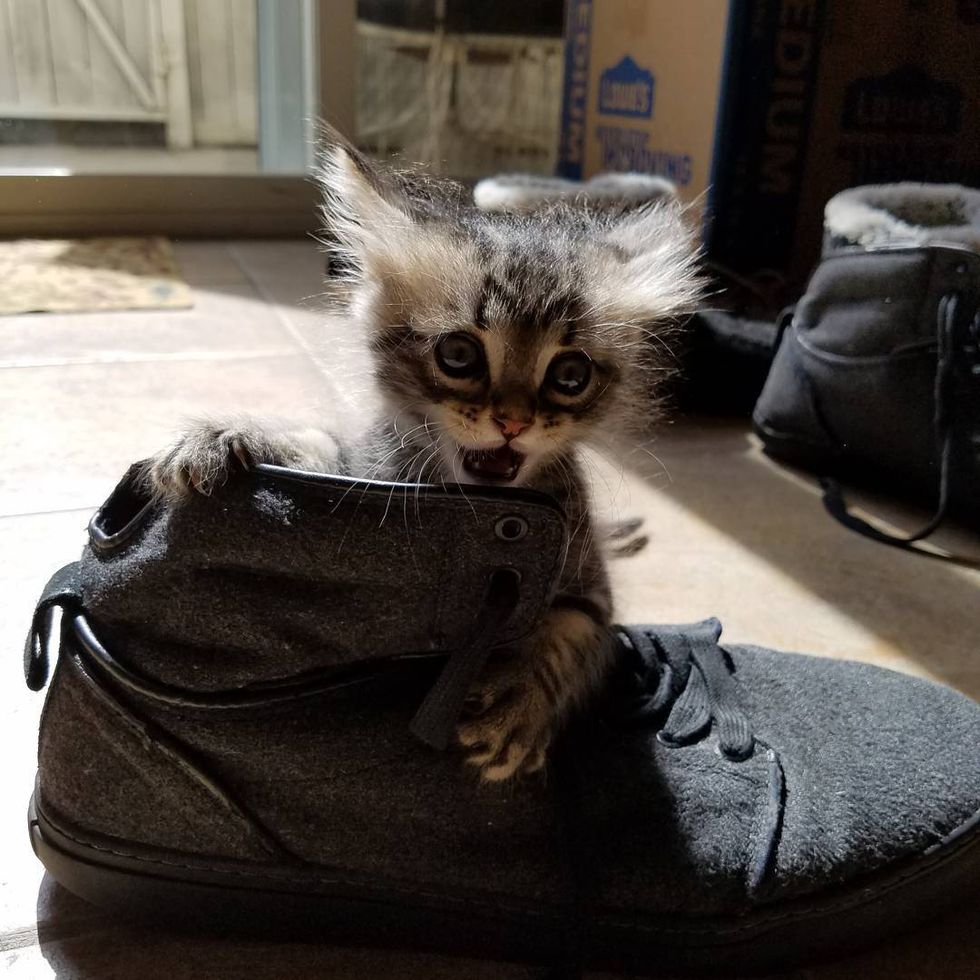 "After weeks of treatment the wound started to close with new tissue, and he began learning to walk. He had to drag his little leg behind him because the tendons were destroyed.

"We were lucky we didn't have to get it amputated. Instead we got to do physical therapy and hold him up right while he walked. His leg fused into a good position and the rest was history." 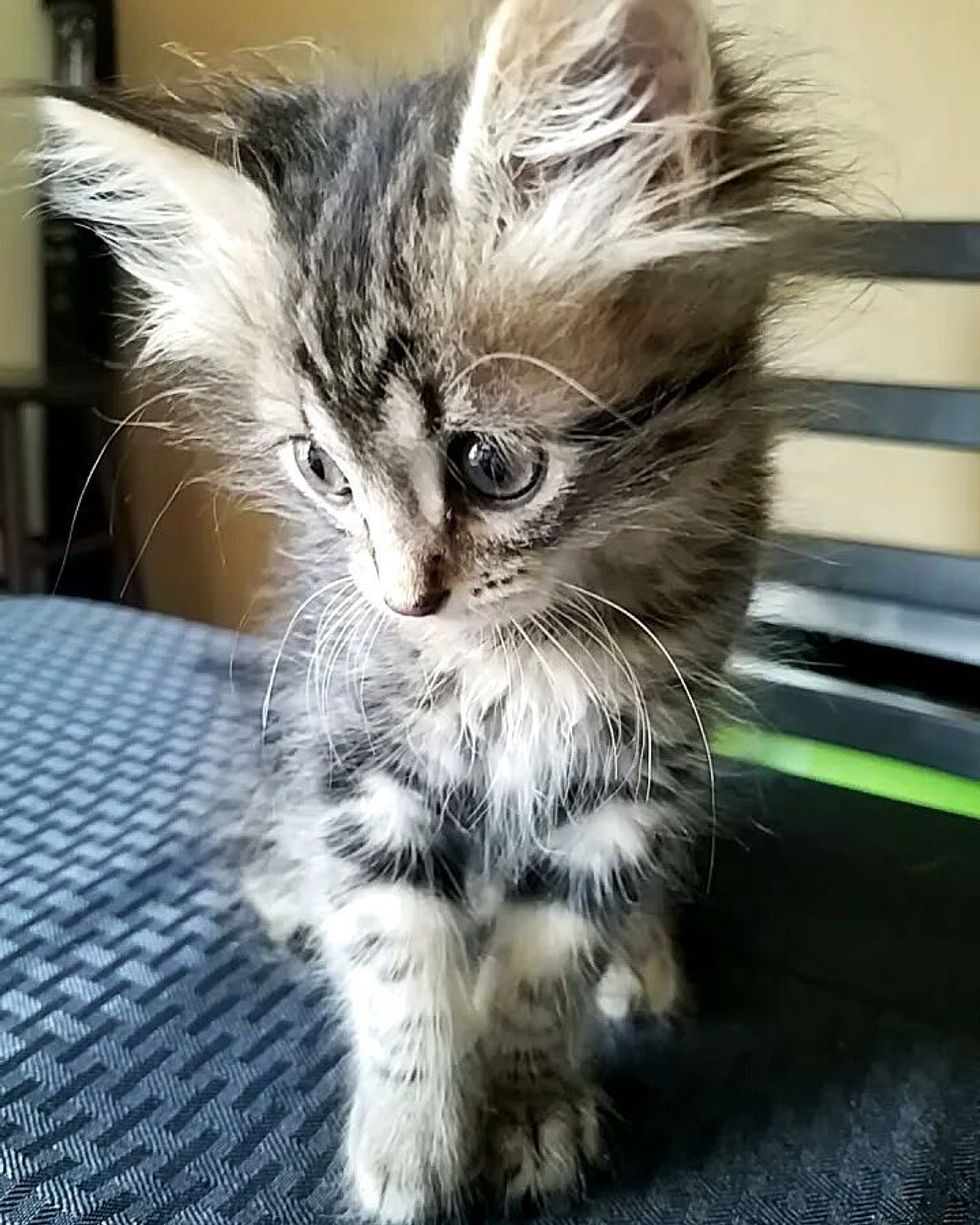 Though Jack now walks with a slight limp, nothing can slow him down.

Jack met Pumpkin, his new brother from another mother at his forever home. They instantly bonded. 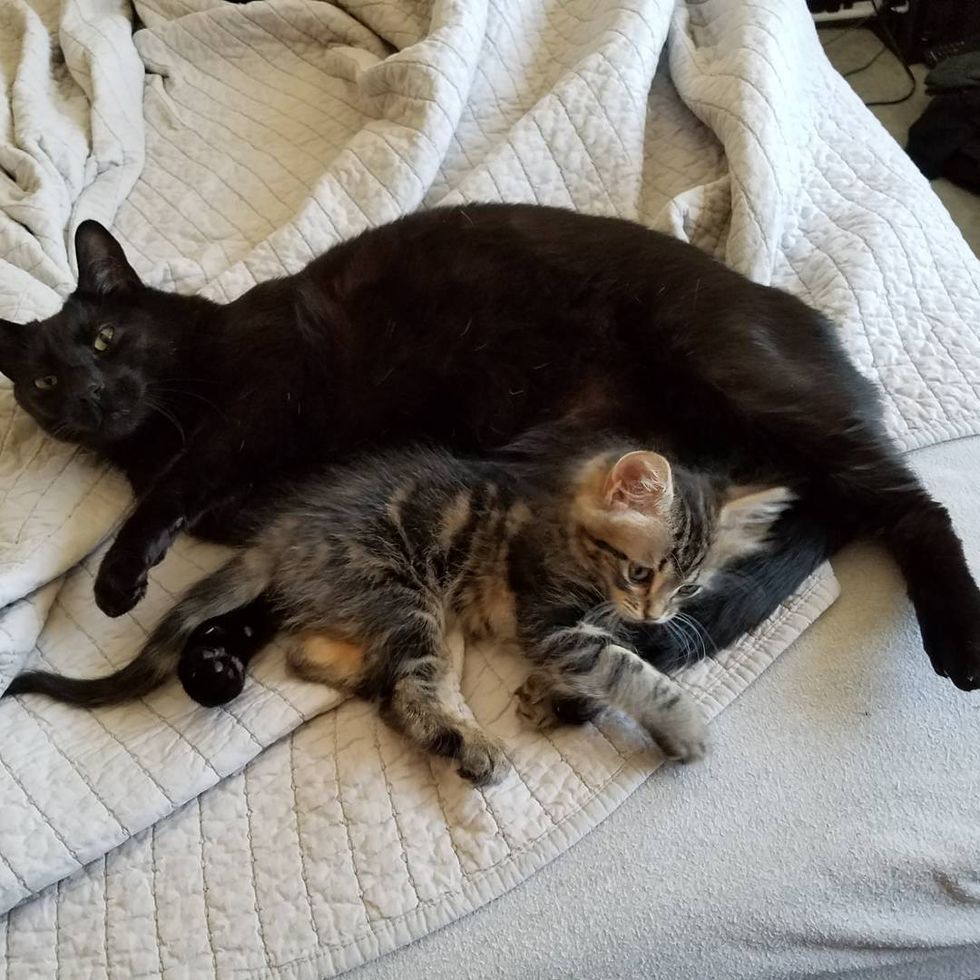 "He just loves life and doesn't let anything hold him back!"

Look at those big paws! 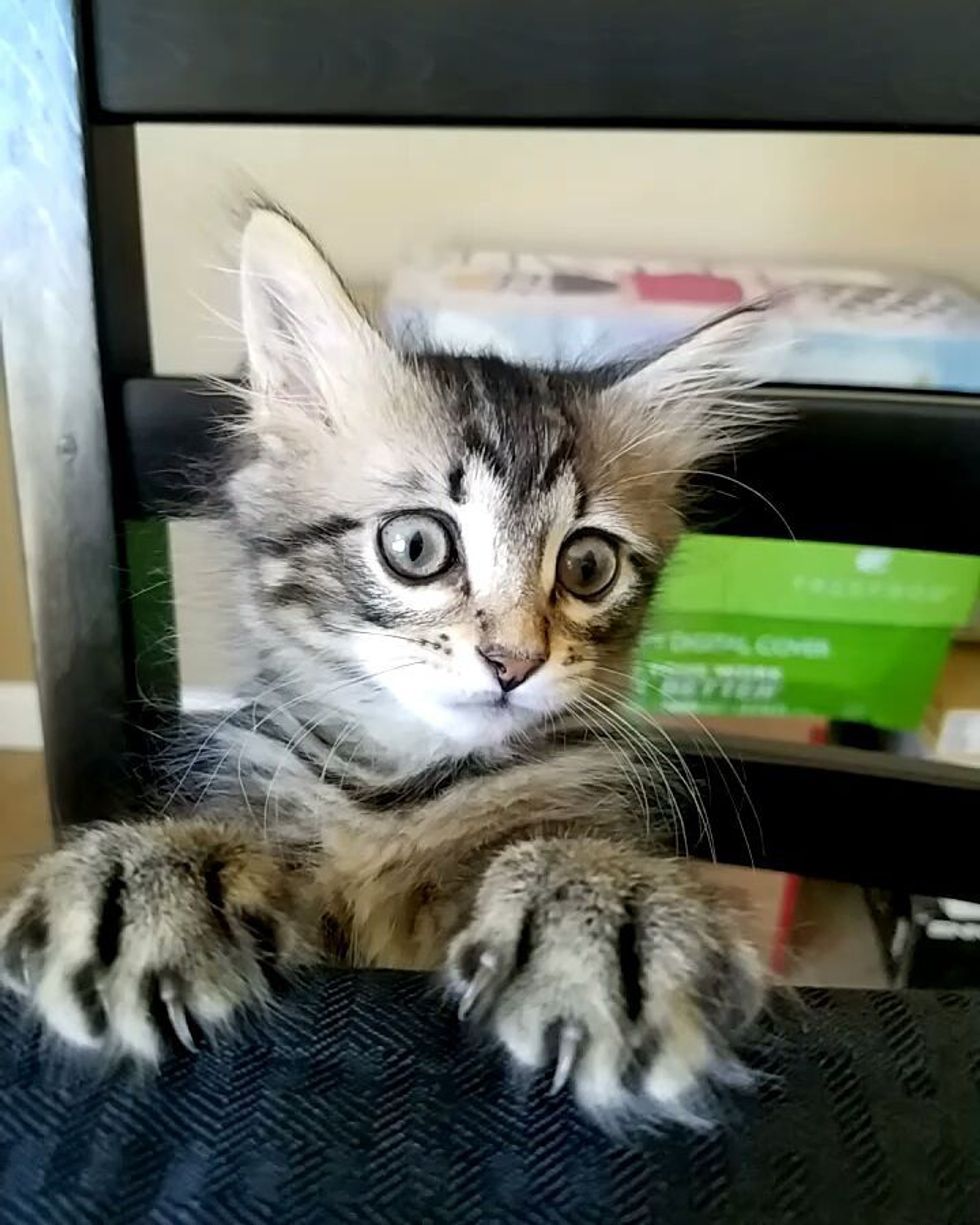 Pumpkin took Jack under his wing! 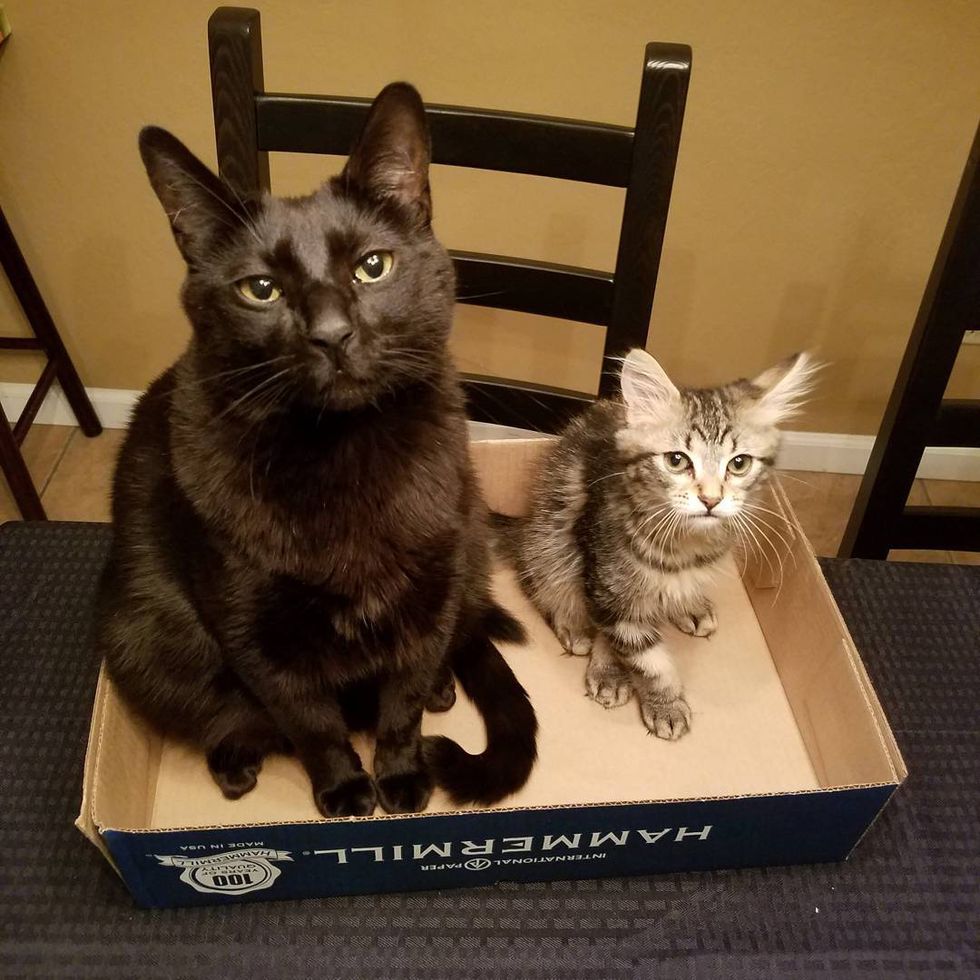 Jack the fearless kitty has grown by leaps and bounds!

"He loves to hop outside with his humans and go on car rides." 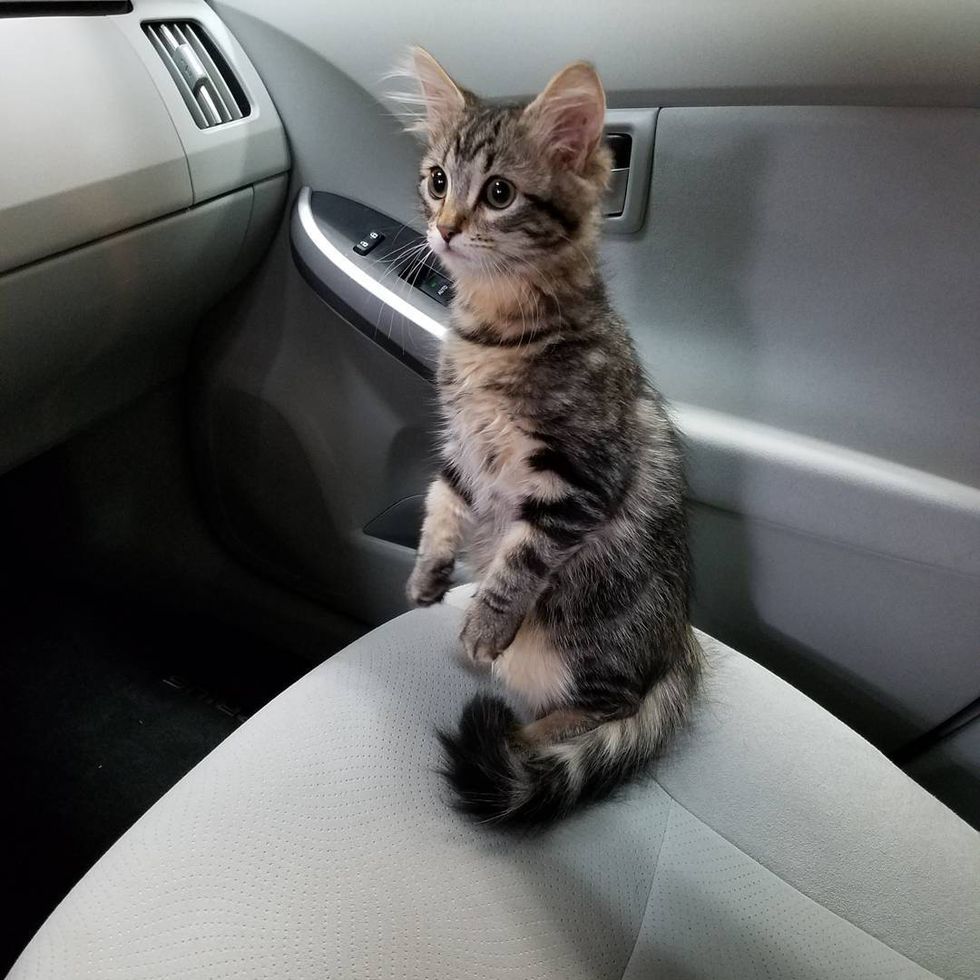 "My mom kept his mom and named her Misdreavus and we took Jack to my house to live with me, my boyfriend and our kitties," she told Love Meow.

"With all the vet visits and visits to the pet store for toys he just loves strangers." 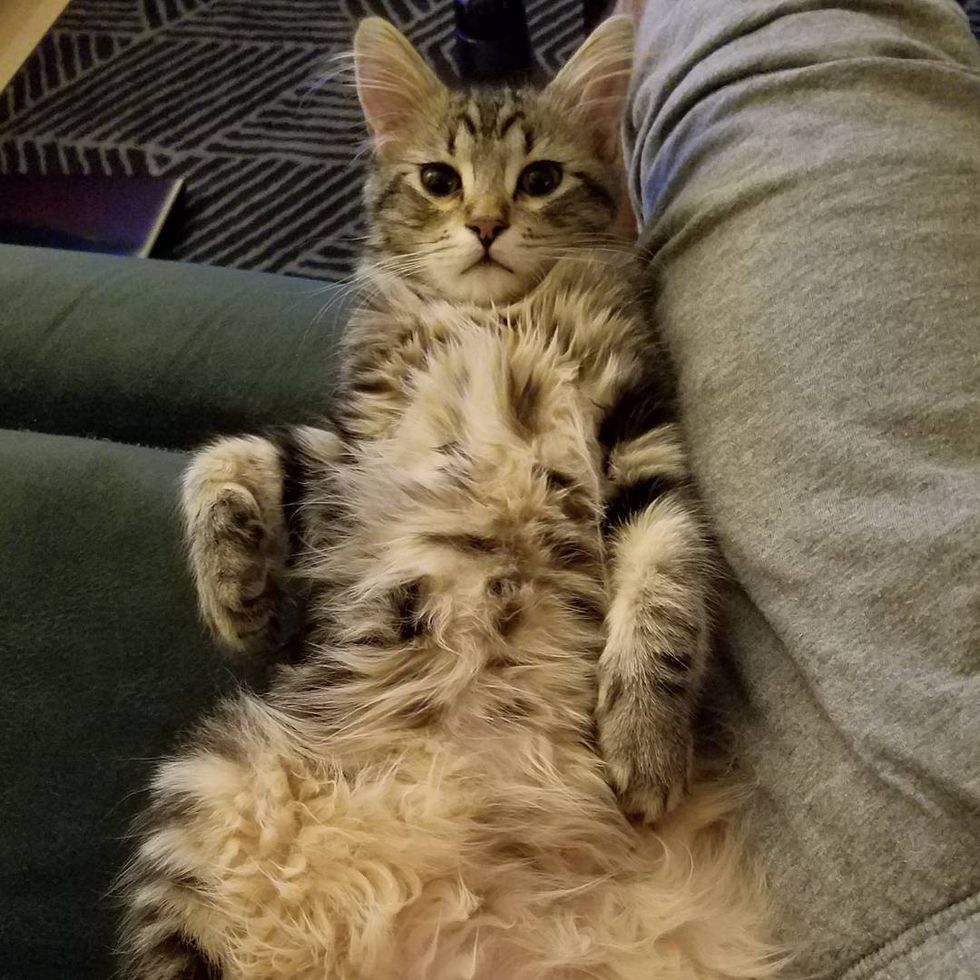 Six months after he was rescued, look at him now!

"He is best friends with my three other rescue cats, especially Pumpkin. He loves tuna and milk. He's a wonderful little cat." 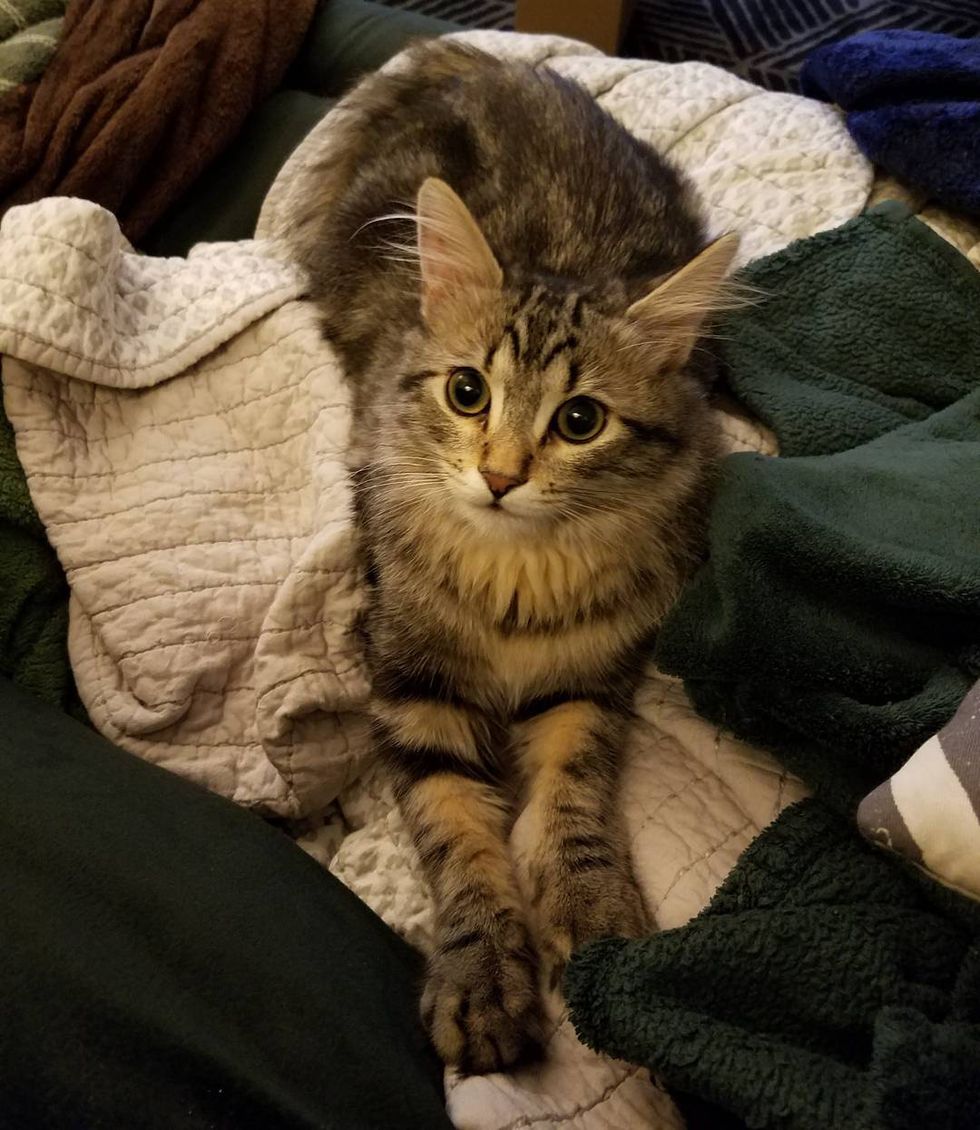 Jack learned to fetch all by himself.

Related story: Tiny Kitten Rejected by Her Own Mom Finds Love in This Guy