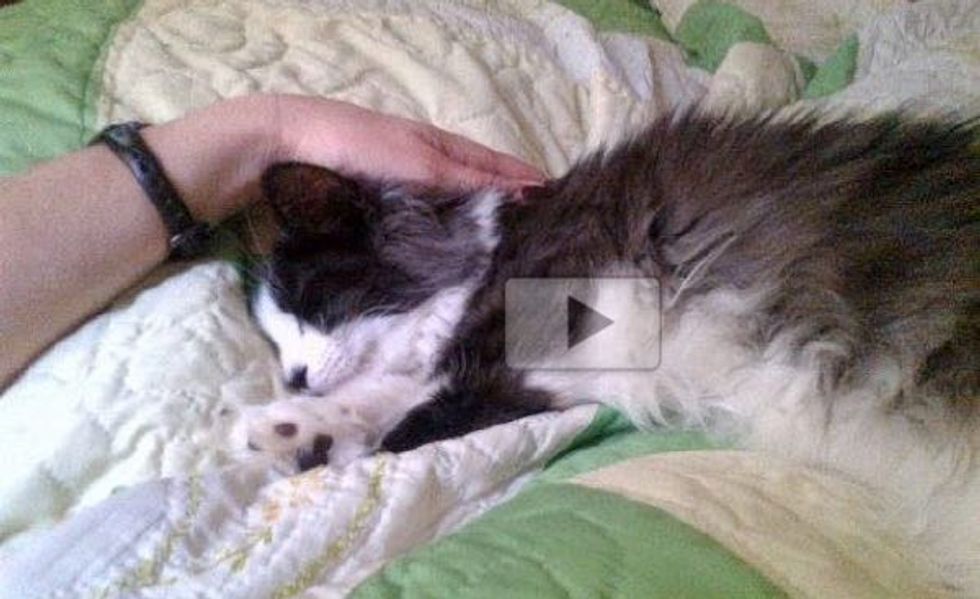 Sidney a rescue stray cat and his transformation from the most fearful cat to a loving affectionate kitty!

Sidney the cat was found as a stray, terrified of humans. Eva, animal rescuer from Brooklyn, New York, pulled him from the euthanasia list and Stephanie, a fosterer of Big City Little Kitty took him home to socialize. "He showed potential when I met him, so I gave it a shot. He was the most fearful kitten I have ever socialized, but he came around. It was worth it," Stephanie said.

In the beginning Sidney refused to be touched and showed a lot of fear. Stephanie decided to feed him with a baby spoon, and he started show his first sign of trust. "Now that I can use food as a motivator, we'll be moving right along," Stephanie wrote.

Here Sidney is on day 1, hiding and terrified.

"He was not ready when he arrived, so I gave him a trap to hide in. It seemed to calm him down and he allowed me to pet him if my face and body were on the other side of the trap."

"From the beginning, he was a sucker for a belly rub."

"As time went on, with food and play bribery, he came around and allowed me to pet him out in the open."

And he LOVED the petting!

After a month, Sid came out of the bathroom. "He made himself right at home.... Soon, it was clear he was ready for his furrever home."

"Here he is transitioning into his new home, his new siblings introduced themselves right away!"

"He fit right in, and his mama told me it's like he'd always been there, and belonged there. Life is now just one long Caturday morning for this kid. I just can't express my happiness and gratitude."