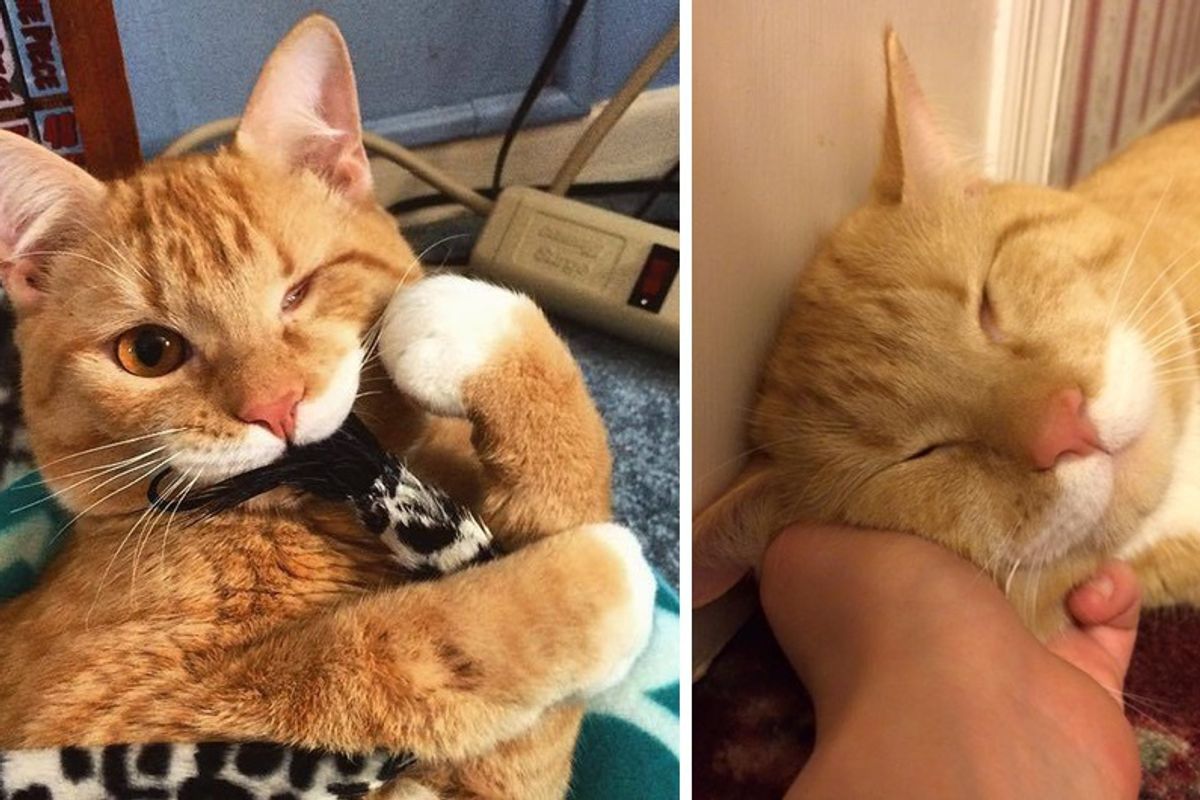 An one-eyed ginger cat with the purrfect mustache wobbled his way into a woman's heart. "He may fall over and may occasionally make a mess when he eats or drinks, but I wouldn't have him any other way."

This handsome ginger cat was rescued from a hoarding situation in Philadelphia. It didn't take long for rescuers to notice that he was quite special. Charlie Chowder was born with Cerebellar Hypoplasia (CH) and only one eye. CH occurs when the cerebellum, the part of the brain which controls fine motor skills and coordination, is underdeveloped.

Despite his disabilities, Charlie Chowder never thinks he's any different. He's in no pain, and to him being a little wobbly is what he considers normal.

The sweet ginger boy was taken in by Animal Welfare Association, a rescue group in Voorhees Township, New Jersey, for a second chance at life. The kitty quickly stole everyone's heart with his adorable personality and loud purrs. He was the kitty that everyone wanted to cuddle.

When Rachel Gregory, a Veterinary Assistant at Sheehan Veterinary Centre, came across a post about Chowder, she fell in love. She drove to the shelter the following morning.

As the shelter worker led her to the cat room to meet Chowder, she explained that several families who had come close to adopting the sweet kitty, had backed out once they became fully aware of his condition.

"I was thankful for her honesty, and her love for him, and I was brought close to tears," Rachel said.

As soon as Rachel saw the little guy with the perfect mustachio totter up to greet her, her heart felt full. That day Charlie Chowder left the shelter for his forever loving home.

Charlie walks up to his human mom for love and head scratches :).

"Charlie Chowder fills me with endless inspiration. He is always trying new things, and is never afraid to make a mistake," Rachel said.

"He teaches me that it's okay if we fall down, so long as we pick ourselves back up."

"He is a constant sense of comfort and love, purring louder than any cat I've ever met when I hold him close, and lovingly giving me kisses with his rough kitty tongue.

"His white facial markings make it look like he is always smiling, and due to only having one eye it appears that he's winking constantly. Both of these features highlight his personality perfectly. He truly is the happiest, bravest cat."

Cats like Charlie Chowder have a very difficult time in shelter environments. They are often overlooked because of their condition even though these kitties are not in any pain and can live a happy and quality life.

Charlie doesn't want people to feel sorry for him as he knows he's perfect. Every day he touches people's hearts with his love for life and adventures.

"Admittedly, Charlie does occasionally fall out of his litter box and go to the bathroom on the floor, or he may fall in it and get himself dirty which requires a bath, but otherwise he is just like any other cat.

"He is a true inspiration to me because despite how many times he may be 'knocked down' so to speak, he ALWAYS gets back up."

"This sweet cat wobbled into my life with his funny walk, and for that I am forever grateful," Rachel said.

"Because of him I ended up adopting another CH cat, a female who I named Lenora, and my mom also adopted one named Pip."

When they hear the treat box, the kitties come running :).