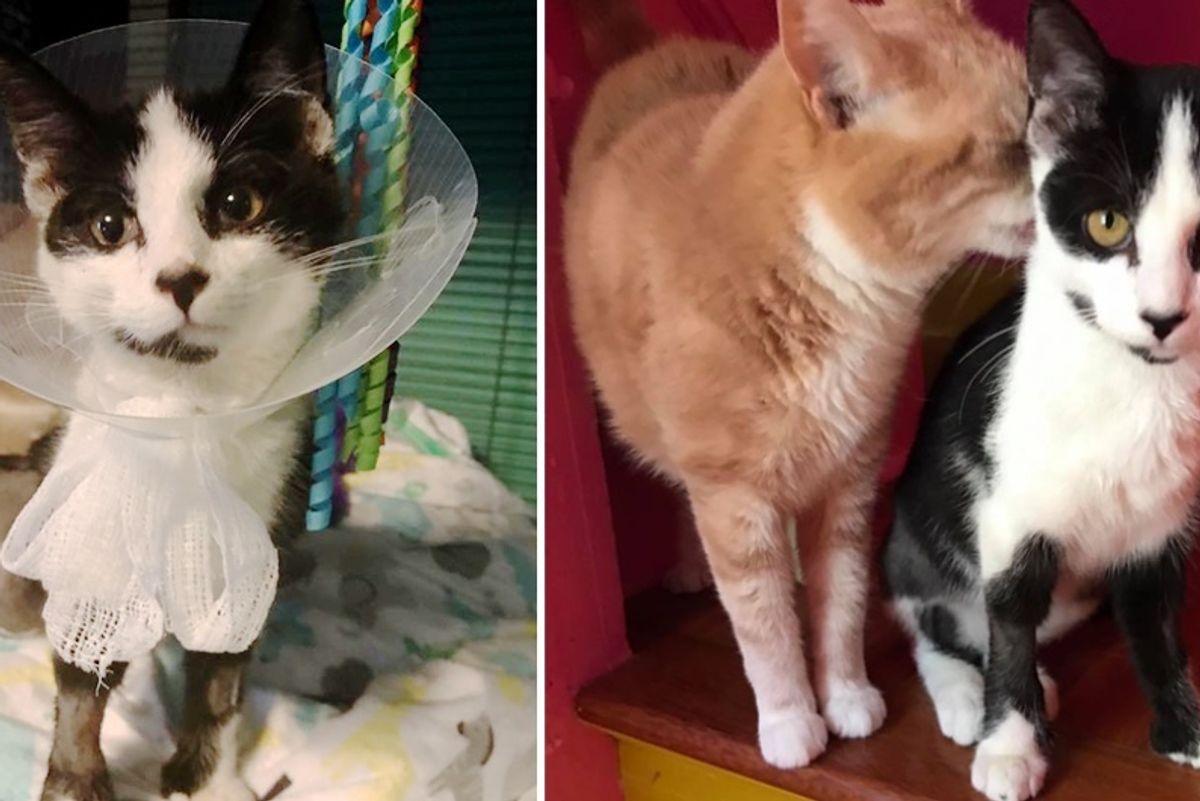 Woman Saves Cat Others Thought Was Too Broken to Do Anything, and Proves Them Wrong...

A woman took a chance on a cat that others thought was too broken to have a good quality of life if he did survive. With a second chance at life, the tuxedo cat proved them wrong!

At five months old, Manny found himself at a high volume shelter with severe injuries. He was given a grave prognosis and his fate was sealed unless he had rescue by 6PM that day.

When Kelley Peters, founder of The Kitty Krusade Animal Rescue/Justin, Fire Survivor, learned about Manny's plight, she dropped everything at hand and rushed to the rescue.

"It was almost 3PM. I immediately left work, racing against the clock and insane city traffic. When I got to him, the most precious kitten awaited me," Kelley told Love Meow.

Manny was in really bad shape with severe and extensive trauma: shattered pelvis, left leg paralyzed, right leg broken, internal injuries, and spinal cord nerve damage. Despite his broken body, he purred up a storm as Kelley took him into her loving arms.

"He deserved a chance. His life mattered. Whatever he needed, he was going to get." And he did!

The amazing little boy had the best spirits despite all the broken bones and not being able to move. He kept purring and leaning in for head rubs.

In the next week followed, Manny was admitted in the specialty hospital where he underwent several surgeries to put his broken body back together. With each day, he grew stronger.

One week later, Manny stood up on his own without help. He even tried to walk on his four paws.

The little guy was determined to do things that others didn't believe he could. He never gave up hope, and neither did his rescuers.

After being discharged from the hospital, Manny spent every day doing physical therapy. He went from not being able to move to first taking baby steps, then short walks, then learning to walk on different surfaces. A few weeks after surgeries, he was able to climb stairs like a champ.

"Manny went on to beat the odds. He started with a grave prognosis, and narrowly escaping euthanasia. People said, if he does live, he won't a have a good quality of life. They said, he won't be able to to do things. Well, not only did Manny live... he's thriving!

"He does everything a kitten his age does. He learned to walk again. He learned to climb, jump, run. He plays! He lives each day with only purrs and happiness," Kelley told Love Meow.

"Manny had tons of love and care from being held, comforted 24/7 to cheerleaders and supporters rooting him on with his progress. He had therapy that went at his pace, in way that was natural for him.

"When that kind of love and good energy around you, it's made a tough road easier."

Manny's first kiss from a girl!

"Now to see him enjoying life, playing with other cats, lounging in sun puddles, purring all the time, and just loving being around people, it just goes to show, never give up because you never know what tomorrow will bring," Kelley told Love Meow.