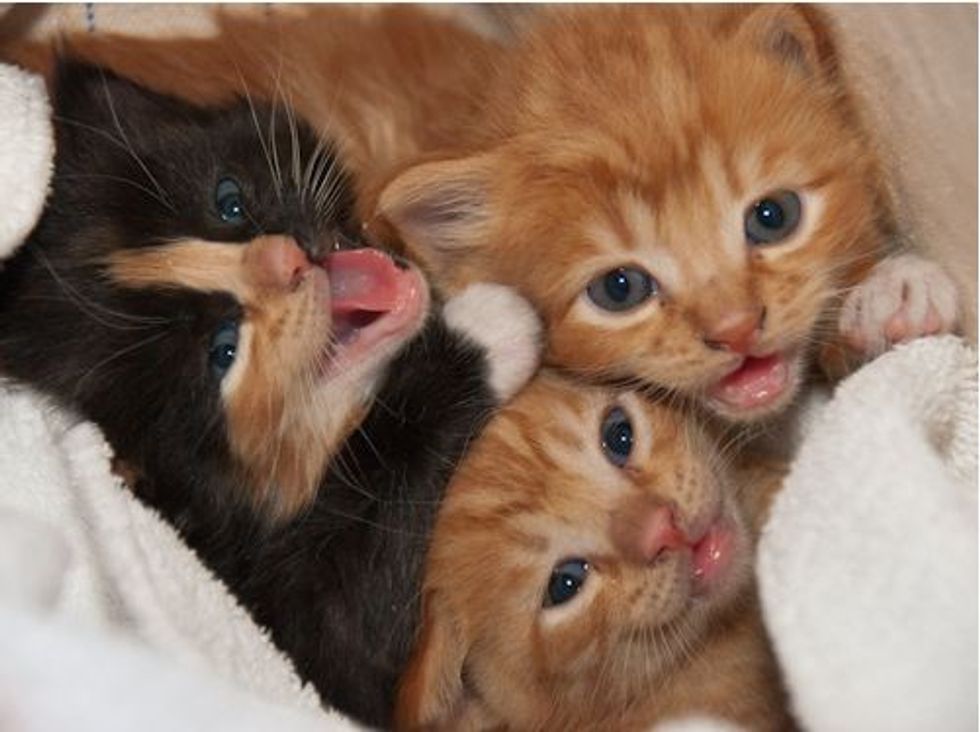 Logan, Maggie, and Simon were born outside our house to a stray cat. We found them inside the air conditioning unit, trying to keep warm. Their mom had left them and when she didn't return, we decided to take them in from the cold. Not sure what was the right thing to do, I called the SPCA as well as a local organization that deals with feral cats. The best advice we got was to withhold the babies from their mother, take them in and foster them until they were old enough to be weaned.

They were 3 1/2 weeks old (by weight, teeth, eyes, and other developmental characteristics) at that time and needed to be bottle fed for a few more weeks. The mother cat returned later that night, crying outside by the air conditioner which was so sad. We immediately began the process of feeding and taming her. It was apparent that she was at one point someone's pet but had gone a bit 'wild' because she was quite skeptical of humans although somewhat wanting to come up to us. Eventually, over the course of the next 2 days of visiting with her, she was trusting enough that we thought we could get her into a carrier, but not without her getting quite upset.

We brought her to the SPCA with funding for them to take care of her spay operation and vaccinations, and then adopt her out, once they spent time socializing her. The kittens were a handful, but so darned cute that it didn't seem like too much. When they got to the point of not wanting to use the bottle and were eating solid foods completely, we began to strategize how to go about finding them homes. It never got any further than printing out photos of them, which my husband put up in his office. His boss was interested in Maggie and asked to take her photograph home to his family. They quickly decided that they would take her. But...when my husband called me to tell me that, we found so many reasons NOT to just go ahead keep her for ourselves. And that is the rest of the story!